Introduction
Epilepsy is a chronic condition characterized by the presence of recurrent paroxysmal brain seizures (epileptic seizure), as a result of an excessive discharge of the neurons within a structural or biochemical epileptogenic brain  injuries  (according  to  the  International  League A g a i n s t   E p i l e p s y   a p p r o v e d   b y   Wo r l d   H e a l t h Organization).(1,2)

The association of epilepsy with mental disorders is already known from antiquity(8). Later Kraepelin affirmed that patients with epilepsy present personality disorders and predisposition for psychoses.(9)
The prevalence of mental disorders in epilepsy is of 30- 40%, being able to exceed even 60% in those with different neurological impairments, and the psychoses one is of 1-3%, being higher in patients with temporal lobe epilepsy(5,7). Kaplan mentions that epileptics present mental disorders, depression being present in 7.5 up to 34% of them. At the same it is to be mentioned that psychoses and personality disorders are 3 times more frequent in patients with complex partial seizures. (9) The most frequent comorbidity in epilepsy is depression, the estimated prevalence of it vary between 50-55% in patients attending hospital, or ambulatory system, 20-30% in those with reccurent seizures, and 6-9% in those in remission. Depression can appear after epilepsy surgery too.(4) The suicide rate in population suffering of epilepsy is 5% (in the whole population 1,4%).(11) The epilepsy treatment can also lead to depression, nervousness, abnormal thinking (Topiramate, vigabatrin) (4,6).
The mental disorders in the epileptic child are different depending on age(10). Thus, we care to mention behaviour disorders with instability and psychomotor agitation, cognitive impairment, personality disorders (with viscosity, aggressiveness, irritability, egocentrism), learning disorders, attention deficit, hyperactivity disorder, anxiety, depression, psychosis. (12)
Material and methods

A study has been performed within the Clinic of Pediatric Neurology and Psychiatry from Tg-Mures during 2014, being monitored 24 children with various forms of epilepsy, aged between 10 and 18, who presented neurological disorder as well. The patients have been examined neurologically, paraclinically by EEG, brain imaging (CT scan and brain MRI), also psychiatrically by Raven’s Matrices, projective tests, depression and anxiety scales (MASC, Hamilton, Beck, Bender).

Out of the 171 cases of epilepsy diagnosed in our Clinic of
Pediatric Neurology and Psychiatry from Tg-Mures in
2014, the prevalence of epilepsy associated with mental disorders was of 12%.
The specialized literature mentions a higher incidence of epilepsy in male gender, in the studied cases this being of 71%.
The maximum incidence of mental disorders in epileptic children has been in the group with ages between 10 and 12, namely 33% (6 cases), 12-14 years old 29% (7 patients), 14-16 years old 25% (6 patients), 16-18 years old 13% (3 patients). 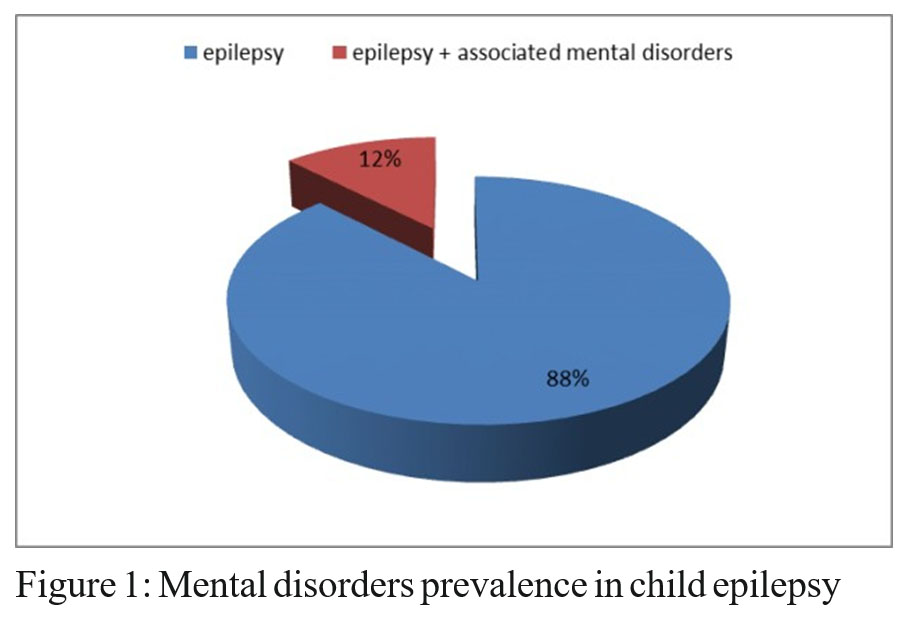 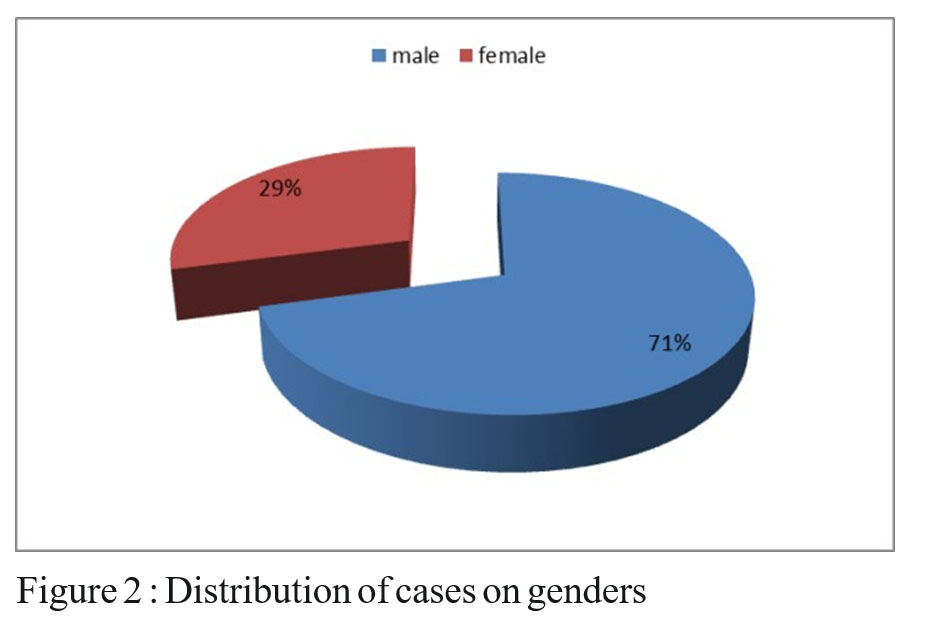 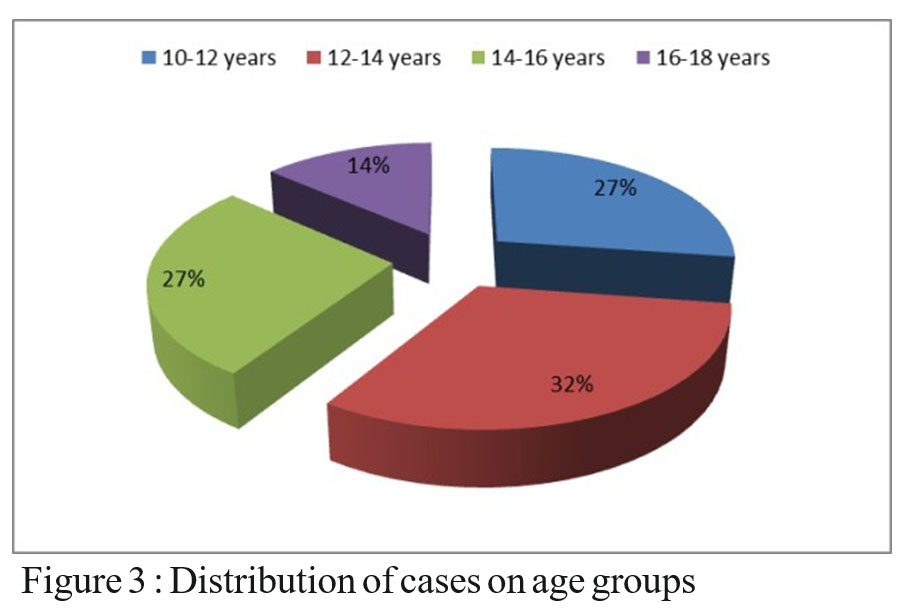 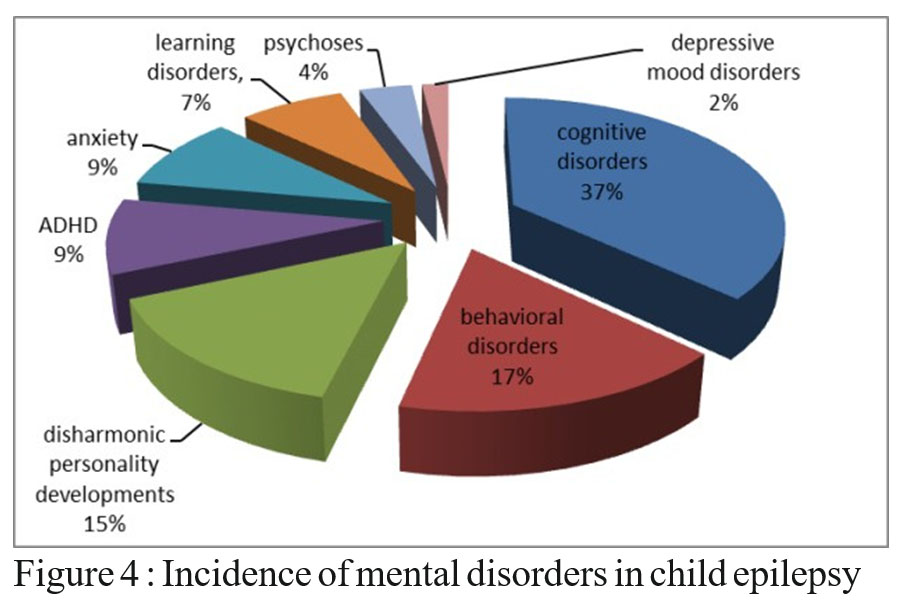 The incidence of mental disorders in epileptic children according to their background has been equal between the urban and rural environment, namely 50%.
The mental disorders encountered in the child diagnosed and treated for epilepsy have been:
– cognitive disorders: (37%);
– behaviour disorders: (17%)
– disharmonic personality developments: (15%)
– attention deficit hyperactivity disorder: ( 9%)
– anxiety: ( 9%)
– learning disorders: (7%)
– psychosis: (4%)
– mood disorders of depressive nature: (2%)

Behaviour disorders have been encountered in 11 patients consisting in irascibility (2 cases), disobedience and stubbornness (4 cases), auto- and hetero-aggressive manifestations (5 cases). 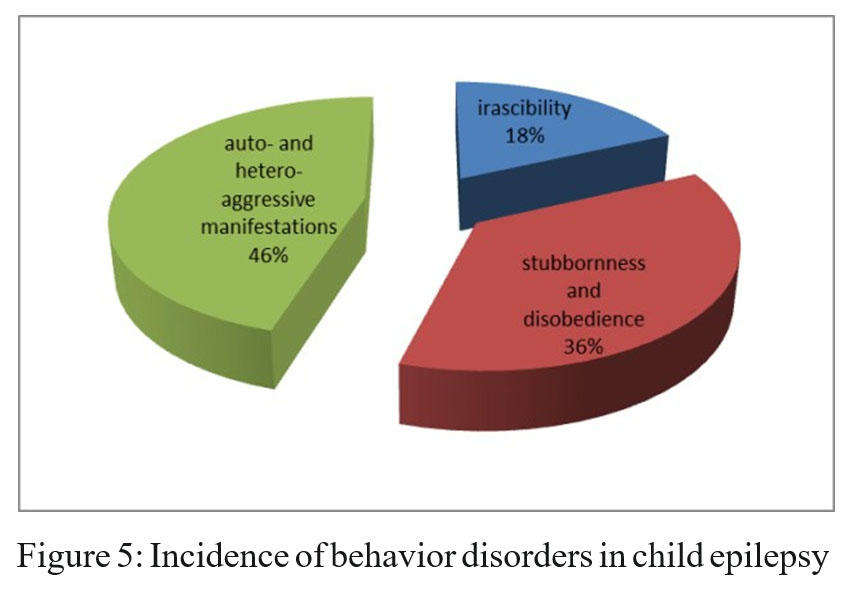 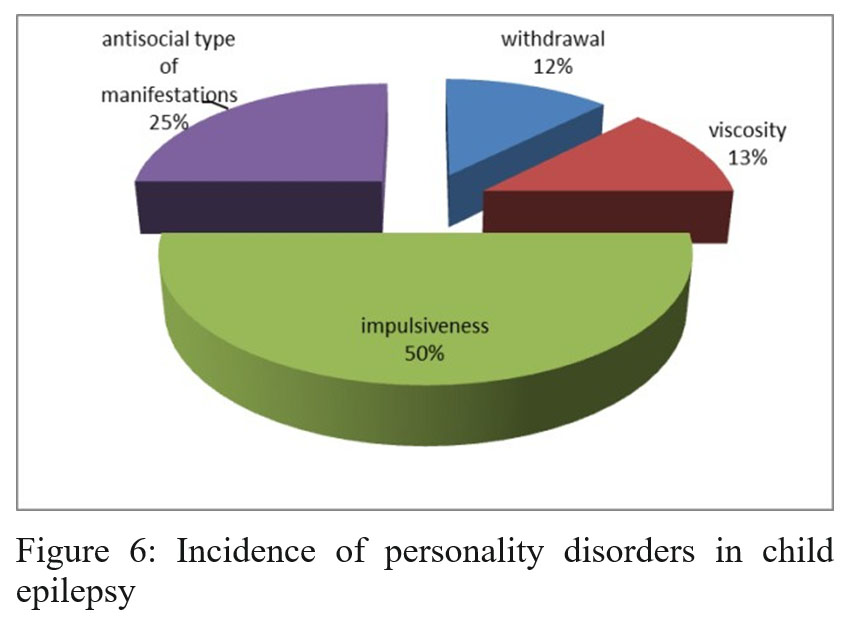 The psychotic type of disorder has been the most severe mental disorder in the epileptic child, consisting in mystical and paranoid delirious ideas, in 2 cases (8%). Language disorders were also present consisting in dyslalia, stuttering, dysarthria in 13 children. Also there have been encountered affective and mood disorders namely: 1 case of depressive disorder, and also 1 case of anxiety.
The associated cognitive impairment in the children patients with epilepsy under treatment, has consisted in mild mental retardation (intellectual disability) with schooling in aided school in 25% of cases, moderate mental retardation in 17% of cases and severe mental retardation in 37% of cases, and 21 % of the patients had a normal cognitive level. 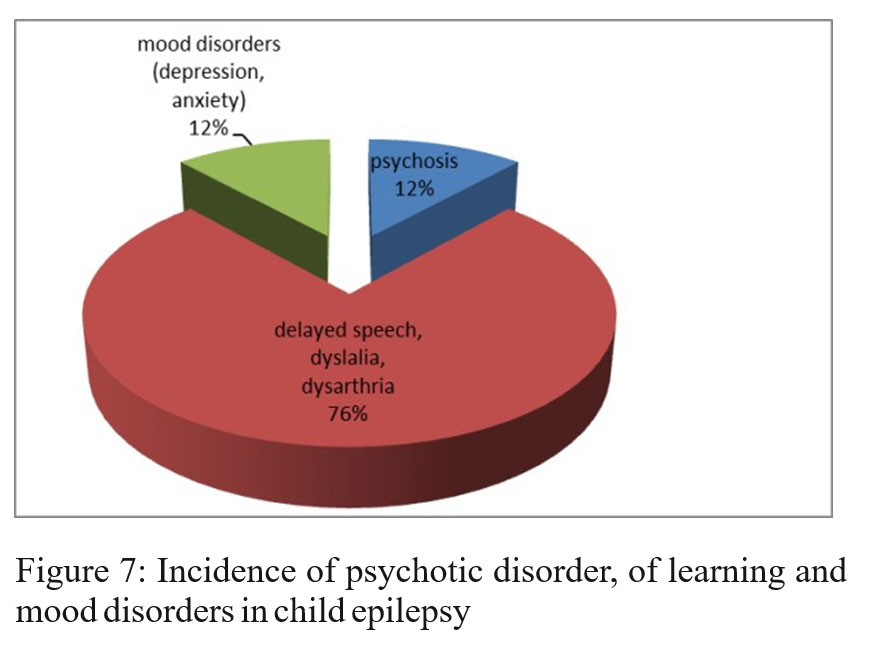 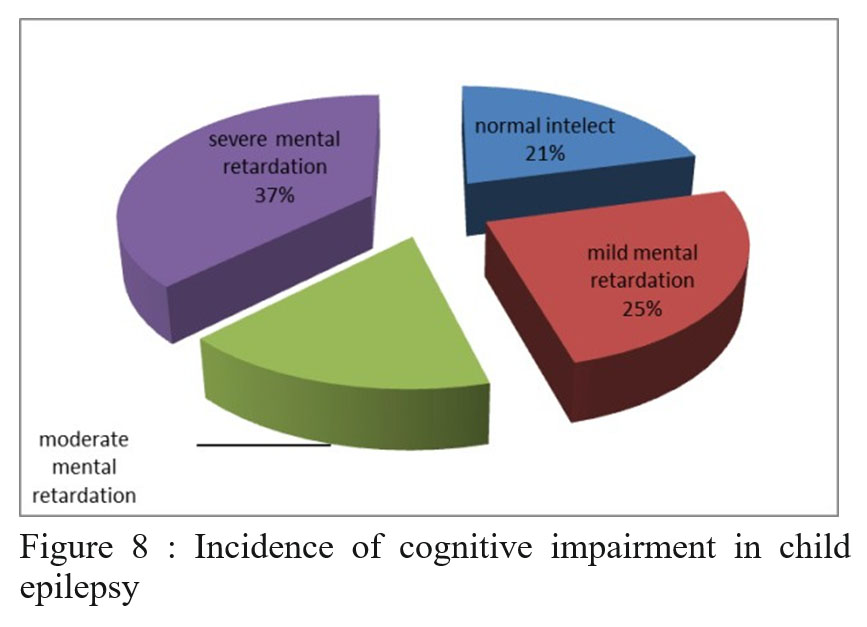 Discussions
Recent studies point out the fact that child epilepsy evolves with a high risk for the occurrence of cognitive impairment, behaviour disorders, emotional disorders, language or mood disorders. This risk is all the more higher as the structural underlying disorders to the epileptic process are more pregnant(2). The monitored patients presented a cognitive impairment in most of the cases (79%), only 21 % of them having a normal cognitive level. At the same time the behavioural disorder consisting in disobedience, irascibility, impulsiveness with auto- and hetero-aggressiveness has been present in 11 patients.(12) In most of the epileptic children within the study (45.8%) the onset of the epileptic seizures occurred before the age of 3, when the child’s psychic is at its peak of development, therefore the psychic vulnerability is higher, aspect mentioned also in the specialized literature (1,2,6) Personality disorders appear in a 1/3 of the epileptic patients , fact emphasized also in the children within the study, namely in 33% of them, under the form of viscosity, adhesiveness, antisocial type of elements, instability, impulsiveness, consistent with the specialized literature data.(9,12)
It is mentioned the occurrence of psychosis in patients with temporal lobe seizures (5).
Epileptic children with psychotic decompensation within our study (2 cases) have presented seizures of complex absence type, complex focal seizures secondarily generalized, the structural lesion being in the temporal lobe.(5,7)
Some of the antiepileptic medications may cause reactions of behavioral or cognitive type (12). Within the study performed it could not be established if cognitive or behavioral disorders had a bearing on the antiepileptic medication treatment.(6)