THE RELIGIOUS DELUSION AND THE “MULTIPLE REALITIES” PERSPECTIVE

The religious delusion has not been the focus of many clinical and psychopathological studies. A possible reason could be that it cannot be easily assessed through the cognitivist research methodologies. An interesting approach is the one of the “multiple realities” (the fictional realities of literature, theatre, virtual computer world etc.), an idea recently developed by Gallagher. The cases of religious delusion are characterized by a psychopathologic process of depersonalization/trans- personalisation, by entering a particular role in a “special mystical world”; a simplified and distorted one. The paper discusses 12 cases of religious delusion from the Case Register for Psychosis Timisoara. It focuses on the role of narrativity and the process of identification with characters from the mythical narrations in delusion. It suggests the development of phenomenological- existentialist research in the domain of delusion from the multiple realities perspective.

The sacral mythical scenario, the multiple realities (MR) theme and delusion.
The multiple realities hypothesis refers, in Gallagher’s description, to the cultural narrative universe of the theatre, literature, novels, virtual reality. The mythical reality is not mentioned.
The characters of the narrative worlds – theatre, literature, history, biography – are placed in an intermediate position in relation to the physical social reality of the everyday life. Generally, they are part of the profane reality and they are not characterized by omnipotence, like the characters of the sacral world. In these “multiple cultural worlds”, we can identify some areas that are closer to the supernatural reality (e.g. witches, aliens) and other closer to the common existence (historical characters, biographical heroes). The sacral instance is traditionally an originary, “world-creating” reality. This is the reason why the religious delusion is a special delusional theme which might have a psycho- anthropological value that can clarify some aspects of this psychopathologic syndrome. 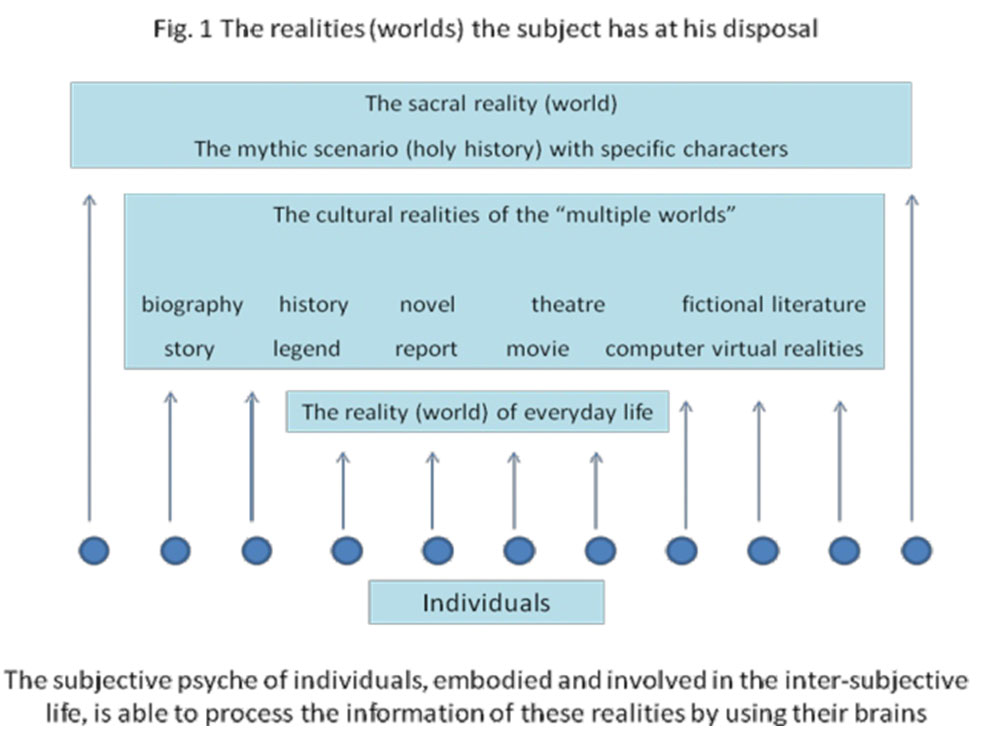 I n d e l u s i o n , a s w e l l a s i n o t h e r psychopathological states, the psyche’s structures un- differentiate themselves, affecting the specific anthropologic spatiality, temporality, causality and the identitary structure of the subject. Temporality is centred by the present time, which lies between the remembered past and projected future. Spatiality refers to the anthropological distance on the intimate-public axis and to the objective closeness. Causality implies the origin and occurrence of a phenomenon and the way of action, including thinking and language. The subject’s identity has a complex structure. It includes his social identity (name, identity card, marital and professional status, biography), his subjective belonging to the self, the differentiation from others and the environment and the sense of agency and ownership of his experiences. Moreover, it implies the global feeling of self-identity. The impairment in all these areas needs to be explored in delusion.

MATERIALAND METHOD
The paper analyses 12 cases of religious delusion. They are part of the Case Register for Psychosis Timisoara. The register includes a total number of 1618 new cases of psychosis during the period 1985-2004, out of which 728 cases are still under observation. This sample has been analysed with different aims until present. During their evolution, 225 cases presented religious delusion.
The purpose of the study is to analyse and understand the religious delusion from the MR perspective. The paper does not discuss the statistical clinical and evolutional characteristics, but the phenomenological aspects of the 12 cases. The subjects present religious delusion characterized by grandiosity ideas of special mission given by God or identification with mythical and sacral characters. We try to analyse the depersonalization/trans-personalization process of delusion. This process transforms the subject in a special character – a character of the sacral reality, if we consider the particular atmosphere of the religious delusion – but also in other historical or fictional characters, in cases concerning other types of delusions.