Introduction: Schizophrenia represents a chronic and debilitating illness listed by the international organisms as top priority for public health actions to reduce disability and improve the function and quality of life for people living with chronic illness. Objective: The aim of this study was to compare psychosocial functioning of schizophrenic patients after 1 year of neuroleptic treatment in a first episode schizophrenia population treated with atypical or typical antipsychotics. Methods: Procedures of the European First Episode Schizophrenia Trial study (EUFEST) have been previously described. Data analyzed in this paper refers to Romanian patients (N = 113) included in the EUFEST study. Psychosocial functioning was assessed by Global Assessment of Functioning (GAF). GAF questionnaire was applied at baseline and at 1, 2, 3, 6, 9 and 12 months (end of study). Results: Mean value at 1 year compared with baseline was 76.88 (±16.20) vs. 39.06 (±13.56) for Haloperidol, 75.58 (±18.41) vs. 40.67 (±12.71) for Olanzapine, 78.57 (±10.15) vs. 37.65 (±17.05) for Quetiapine, 82.35 (±10.16) vs. 38.24 (±12.52) for Amisulpride, 76.11 (±9.47) vs. 38.33 (±10.26) for Ziprasidone. Statistical comparison with ANOVA revealed no statistically significant differences, p = 0.533. The improvement in functionality in patients did not differ between antipsychotics from one evaluation to another. During the antipsychotic treatment, the psychosocial functioning of patients improved significantly more during the first 6 months, irrespective of treatment arms. After that, the improvement continued to develop, but at a slower pace. Conclusions: Our study didn't support the superiority of atypical neuroleptics versus classical ones regarding functionality in first episode schizophrenic patients. The improvement starts fast with both classes of drugs and the larger part of improvement in functionality took part during the first 3−6 months of treatment.

METHODS
Data analyzed in our paper are drawn from European First Episode Schizophrenia Trial study (EUFEST).
The purpose of EUFEST study (25) was to compare atypical antipsychotics (amisulpride 200–800 mg/d, olanzapine 5–20 mg/d, quetiapine 200–750 mg/d, ziprasidone 40–160 mg/d) with low doses of typical neuroleptics (haloperidol 1–4 mg/d) in terms of effectiveness. The measure for effectiveness in EUFEST is all-cause treatment discontinuation, defined as the time to discontinuation of the study drug to which patients were originally randomized.
Investigators from 50 centers in Europe and Israel participated into this trial. Eligible patients were 18– 40 years of age and met DSM- IV criteria for schizophrenia, schizophreniform, or schizoaffective disorder confirmed by the Mini International Neuropsychiatric Interview Plus.
Inclusion criteria were: 18– 40 years of age and DSM- IV criteria for schizophrenia, schizophreniform, or schizoaffective disorder confirmed by the Mini International Neuropsychiatric Interview Plus, first episode of disease with no more than 2 years elapsed between the onset of positive symptoms and recruitment into the trial and previous use of antipsychotic drugs of less than 2 weeks during the preceding year and less than 6 weeks lifetime.
The investigators invited eligible patients to participate providing information orally and in writing about the trial. After complete description of the study to the subjects, written informed consent was obtained. The trial complied with the Declaration of Helsinki and was approved by the Ethics Committees of the participating centres.
Patients did not meet exclusion criteria in this study if: no more than 2 years elapsed since the onset of positive symptoms; any antipsychotic have not been used exceeding 2 weeks in the previous year or 6 weeks lifetime; patients had not a known intolerance to one of the study drugs; and patients didn’t meet any of the contraindications for any of the study drugs as mentioned in the (local) package insert texts.
Baseline data were obtained between 4 weeks before and 1 week after randomization on demographics, diagnoses, current medication, psychopathology (Positive and Negative Syndrome Scale – PANSS), severity of illness (clinical global impression – CGI), overall psychosocial functioning (global assessment of functioning scale – GAF), extrapyramidal symptoms (St Hans rating scale – SHRS), depression (Calgary Depression Schizophrenia Scale – CDSS), neurocognitive performance (six measures: Trail Making A [time], Flexibility Index [Trail Making B–A time], Wechsler Adult Intelligence Scale Digit-symbol Coding [total correct], Purdue pegboard [total pegs with dominant hand], Rey Auditory Verbal Learning Test – learning index [total correct on trials I–V], and Rey Auditory Verbal Learning Test – secondary memory [total correct on Delayed Recall trial]), and quality of life (Manchester Short Assessment of Quality of Life – MANSA).
All scales have been given to the included patients at Baseline, 1, 2, 3, 6, 9, and 12 months. Data about quality of life were evaluated at baseline, month 3 and end of study (month 12).
In this article we used the term ‘schizophrenia’ for diagnostics of schizophrenia, schizophreniform and schizoaffective disorder.
Data analyzed in my paper refer to Romanians patients (N=113) included in this study.
STATISTICALANALYSIS
We u s e d d e s c r i p t i v e a n a l y s i s t o c h a r a c t e r i z e demographics and repartition into treatment arms. Mean, SD, and sample size are provided for continuous variables. Discrete variables are described using frequencies and percentages. All statistical tests were 2 tailed; α (level of significance) was 5%. Discrete variables were analyzed with a χ2 test. The differences between different treatment arms (Haloperidol, Olanzapine, Amisulpride, Quetiapine, Ziprasidone) were assessed using ANOVA function and corrected with Bonferonni t- tests. Within-group improvement in GAF scores over time was evaluated using paired-sample t tests.
Concerning cognitive functioning, for simplicity a composite score of cognitive functioning was created, after standardizing to create z scores and obtaining the mean for standardized values on the neurocognitive tests. Data were analysed using Statistical Package for Social Sciences (SPSS) version 16.

RESULTS
The EUFEST study in Romania included 113 patients which were randomized to one of the treatment arms. From the 113 initial randomized, 61 (54%) are women and 52 (46%) men.
GAF scale was applied by clinicians at baseline, 1, 2, 3, 6, 9, and 12 month (end of study).
Of the 113 patients in Romanian cohort of EUFEST study, 2 patients did not have valid baseline data and 20 patients did not complete the study. We analysed socio- demographical and clinical characteristics differences between completers and non-completers, because people who didn’t finish the study might be different (and therefore could reduce the reliability of results) from people who completed the study. We found that non- completers were more frequently (significantly statistic) having an occupation and reported a better Quality of Life (significantly statistic) comparing with completers, without any other differences. Data are presented in table 1. 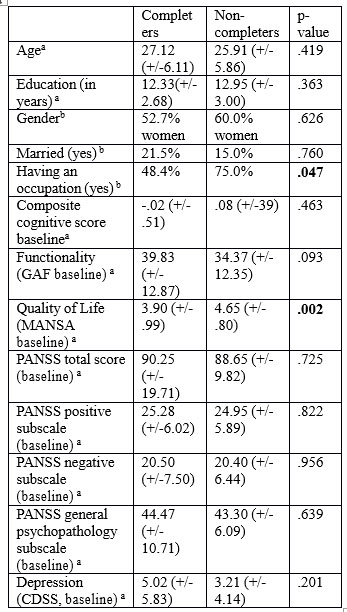 There are no differences regarding treatment arm allocation between groups as evaluated by logistic regression (p=.432).
A summary of data upon socio-demographics and clinical characteristics (PANSS total score) across treatment arms in the population analysed in this study revealed no baseline differences (Table 2a and 2b). 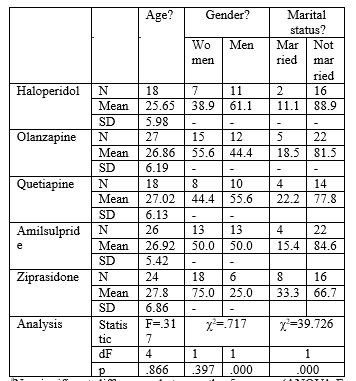 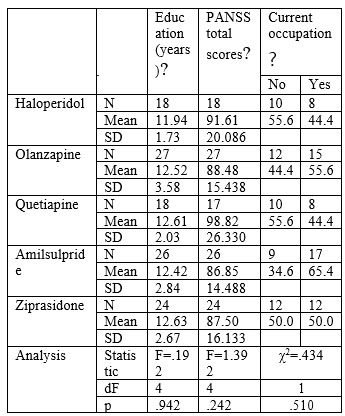 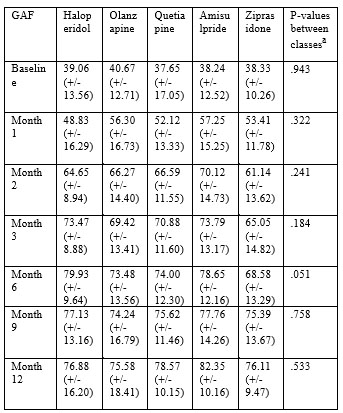 The improvement in functionality in patients is presented in graph 1. We did not note any differences between treatment arms regarding functionality in patients at the moment of inclusion in study. No significant differences between treatment arms regarding functionality occurred at any following evaluation (p>0.05 at month 1, 2, 3, 6, 9, and 12). Controlling for multiple comparisons using Bonferonni corrections t tests comparing the change in GAF score from baseline to each of the visits for haloperidol versus the other four treatment arms of second-generation antipsychotic drugs (Olanzapine, Amisulpride, Quetiapine and Ziprasidone) did not reveal any significant differences. Moreover, there are no d i ff e r e n c e s i n f u n c t i o n a l i t y b e t w e e n a t y p i c a l antipsychotics.
During the treatment, the functionality of patients greatly improved during the first 6 months irrespective of treatment arms, as it can be seen on the graphic 1 and table 4. The improvement in functionality had occurred faster in the first 3 months of treatment irrespective of treatment arm. After that, the improvement continued to develop but in slower pace 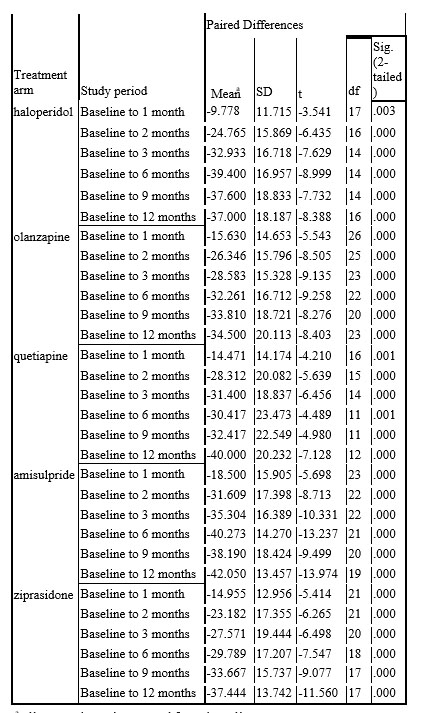 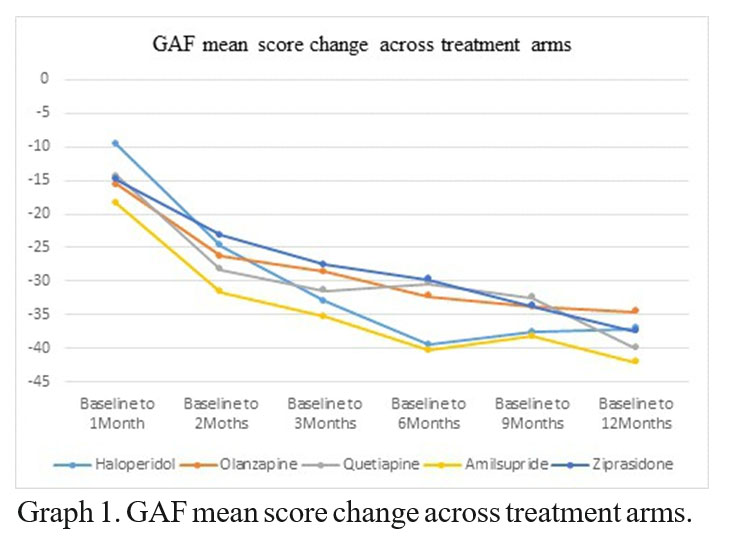