The prevalence rate of depression occurring in people with somatic illnesses is 3 times more than people without somatic illnesses, but less research was conducted in this respect for people with early onset of somatic disease. Taking into account that the presence of depression in chronic patients aggravates the somatic disease, leading to a poor prognosis and higher rates of mortality it is important to detect and treat it. The purposes of our study are to analyse in a large cohort (BCS-70) the risk of depression in patients with somatic illness at early ages (less or equal 30 years). Methods Data used in our paper were drawn from the 1970 British Cohort Study (BCS70). The design and conduct of this study have been described elsewhere (1). Data for the present paper are drawn from 30 years wave. The data were analysed with descriptive function, chi-square and logistic regression. All analyses were performed using SPSS 16. Results At age 30, we have found 1409 people (12.7%) with depression. From a total of 11211 people there are 860 people with hypertension (7.7%) and 109 people with diabetes (1%). There is an increased risk of depression in the case of people with „pure” hypertension or „pure” diabetes (p<0.05). In the case of people with both hypertension and diabetes, logistic regression showed that hypertension is a risk factor for depression irrespective of socio-economic status and diabetes (Exp(B)=1.970, CI=1.579-2.458, p=.001). Conclusion The above data indicate that risk of depression is higher in people with onset before 30 years old of hypertension and /or diabetes. Our study did not identify an increased risk for depression by socio economic class. Data of our study clearly suggests that it is extremely important that young patients with somatic diseases like diabetes and/or hypertension should be aggressively screened and treated for depression. 1. Butler NR, Golding J, Howlett BC. From Birth to Five: A Study of the Health and Behaviour of a National Cohort. Oxford: Pergamon,1985. Bynner J, Butler N, Ferri E, et al. The design and conduct of the 1999–2000 surveys of the National Child Development Study and the 1970 British Cohort Study. UK Data Archive In: CLS Cohort Studies Working Paper 1. London: Centre for Longitudinal Studies, Institute of Education, University of London, 2000. 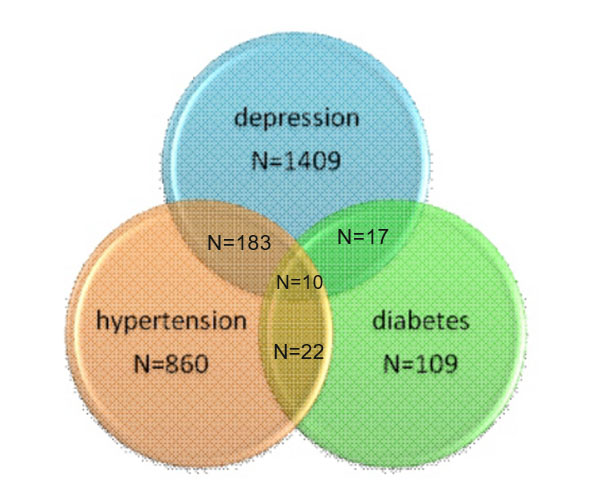 Figure 1. Distribution of hypertension, diabetes and depression within the BCL-70 cohort

Discussion
Our study supports that both diabetes and hypertension increased depression risk, which replicates
results from previous studies –(24,13,19,48,45,5456). We would have preferred to have more objective data about the presence chronic somatic illnesses at 30 years adults. However, the only questions from the cohort which could have offered more objective data “Subject seen a doctor for high Blood Pressure in past 12 months?” and “Subject seen a doctor for diabetes in past 12 months?” come with huge numbers of missing questions (10914 for the first one and 11178 for the second one leaving to few subjects to be analysed 295 for hypertension and 78 for diabetes) and no control group, therefore impossible to analysed. The lack of more objective information regarding somatic illnesses represents one important weakness of our study.
However, strength of our study is that it looked into the association between the 2 illnesses, which is rather rare in this kind of study. Results of our study suggest that the risk is a little bit higher in co-morbid group, but the augmentation of this risk is not quite significant. Moreover, our study controlled the data for socio-economic status, which is rare in this kind of study.
One more important observation is the fact that people included in analysis are young, while other studies
of this kind looked in rather older population (49,57,58). The young age of onset of chronic illness indicates that they may be predisposed to more severe evolution. The pervasive impact of depression on quality of life and its potential negative effect on chronic disease management warrant aggressive screening and clinical interventions appropriate to each country’s healthcare system in young adults with diabetes and/or hypertension.