Objective. This paper aims to describe trends in diagnostic data in discharged patients from a regional child and adolescent psychiatric inpatient unit in Romania, over a 25-year period (1990-2014). Method. Data on discharge diagnosis of the 30854 patients from the study timeframe were analyzed. Diagnostic formulations in the years prior to ICD implementation were converted into ICD-10 specific disorders/ class of disorders. Results. Results showed a significant increase in proportion of autism spectrum disorders and hyperkinetic disorders over time and a significant decrease of stress related, dissociative and somatoform disorders. The number of psychotic disorders was constant over time, mood disorders had peak frequencies in 2003 and 2014 and anxiety disorders has a twofold increase from 2007 to 2014. Conclusions. This study demonstrates a major shift in the patterns of mental health disorders diagnosed among children and adolescents at our clinic over the last 25 years. Defining the current mental health needs of young people and adjusting service delivery in child and adolescent psychiatric settings have become of great importance in recent years.

According to the U.S. National Institute of Mental Health, over 20 percent (1 in 5) children, either currently or at some point during their life, have had a seriously debilitating mental disorder and about 13 percent of children ages 8 to 15 had a diagnosable mental disorder within the previous year (1). World Health Organization states that mental health disorders in children and adolescents are of great concern because of their high prevalence and the accompanying disabilities (2).
The Centaur project was the only systematic epidemiologic survey of child and adolescent psychiatric disorders conducted in Romania between 1981 and 1984, on a nationwide sample of 14812 subjects aged 10 months to 16 years. The study reported an overall point prevalence of 11.7% for any psychiatric disorder in children and adolescents and also assessed the individual prevalence of 90 psychiatric and neurological disorders, based on DSM- III and ICD-9 criteria (3). More recent, population-based representative data are not available in Romania, at this moment.
This paper aims to describe trends in diagnostic data of patients discharged from a regional child and adolescent psychiatric inpatient unit in Romania, over a
25-year period (1990-2014).
METHOD Setting
The present study was conducted in the Department of Child and Adolescent Psychiatry of the „Prof. Dr. Alexandru Obregia” Psychiatry Clinical
Hospital in Bucharest, Romania. The clinic is one of three university clinics of Child and Adolescent Psychiatry in the country and the largest one, with a total of 70 beds at present. The clinic functions as an inpatient unit for acute patients, who are admitted for continuous hospitalization or day hospitalization. The patients addressing the clinic are both inhabitants of the city of Bucharest (approximately 2103000 inhabitants) and the neighboring districts.
An important legislative change in this field, with consequences for the organization of the clinic took place in Romania in 1996, when the specialty called Infantile Neuropsychiatry was officially divided into two distinct medical specialties, Paediatric Psychiatry (Child and Adolescent Psychiatry) and Paediatric Neurology. The actual transition within the hospital with the full separation of psychiatric from neurological cases into two different departments took place gradually, until the year 2000. Thus, prior to this period, patients addressed the clinic either for a neurological or for a psychiatric issue, and only later on did the pathology become almost exclusively of a psychiatric nature. The neurological cases were excluded from the analysis performed in this study.
Procedure and analysis
Data of of 39562 patients hospitalized in the clinic between 1990-2014 have been initially collected in the present study. Of these patients, 8708 were exclusively neurological cases and were therefore later removed from the analysis. Ultimately, 30854 patients with psychiatric pathology, aged between 1 and 18, admitted as continuous hospitalization inpatients, were included in the study.
In 2009, the hospital introduced a computerized system for the manipulation and storage of patient information. Data for the patients who had been hospitalized before 2008 existed only on paper, in the clinical observation sheets and patient registers. Thus, an electronic database was initially created by the transcription of patient data (age, gender, city, diagnoses upon discharge) for the patients who were admitted between 1990 and 2009. Clinical data of the patients who were admitted between the years 2012 and 2014 were provided by the Department of Medical Statistics within the hospital, through export from the computerized system of the hospital (Medical CM). 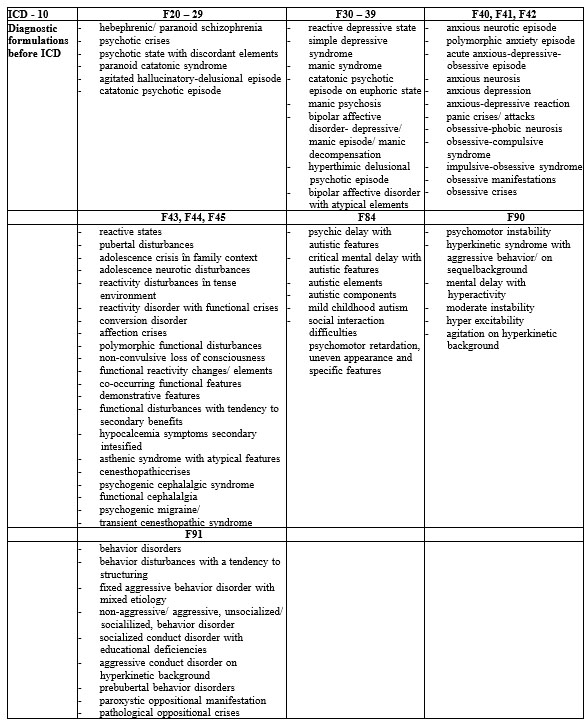 Table 1 Diagnostic formulations prior to the implementation of ICD
For logistical reasons, data on admissions from the second half of 2009 and the years 2010 and 2011 could not be accessed and were therefore not included in the present study.
For the study of the evolution of pathology within the clinic, all the diagnoses upon discharge of the 30854 patients from the study period were introduced in the analysis. Since 2008, all diagnoses are coded using the ICD-10 (International Classification of Diseases) codes, due to the introduction of the DRG (Diagnostic-related group) in the hospital. Before 2008 however, due to the absence of a standardized taxonomic system of diseases, the diagnoses were highly flexible, lengthy, with influences derived from French and Russian schools of psychiatry and dependent on each doctor’s experience and training. Moreover, the medical language used was often different from one doctor to another. Therefore, a major step prior to the analysis was to translate these diagnoses into the closest possible ICD diagnostic categories, by a team of professionals within the clinic. This process was a difficult one, and due to the fact that, in many cases, a specific ICD code for a certain diagnosis was not identified, for certain pathologies, the preferred method was to determine the diagnostic category only (e.g. for any mood disorder the F30-F39-mood (affective) disorders ICD-10 code was used).
Thus, the analysis of the evolution of the pathology within the clinic between 1990 and 2014 was focused on the following disorders or diagnostic classes: F20-29 (schizophrenia, schizotypal and delusional disorders); F30-30 (mood disorders); F40,F41 and F42 (anxiety disorders and OCD); F43, F44 and F45 (stress related, dissociative and somatoform disorders); F84 (pervasive developmental disorders –currently referred to as autism spectrum disorders); F90 (hyperkinetic disorders); F91 (conduct disorders). Table 1 contains relevant examples of diagnostic formulations the years preceding the introduction of ICD in the clinic.
Due to the difference in the total number of discharges with a psychiatric diagnosis per year (ranging from 852 in 1993 and 2567 in 2013), we defined the frequency of disorders using percentages instead of absolute values. Least-squares regression has been used to determine time trends in rates of disorders.
RESULTS
Table 2 displays the frequencies (in percentages) of the mental disorders in the clinic, for each of the years included in the analysis. For each year, the reported percentage represents the number of diagnoses upon discharge of a certain disorder out of the total number of patients with a psychiatric diagnosis admitted to the clinic that year.
Regarding psychotic disorders in the F20-F29 category (schizophrenia, schizotypal and delusional disorders), no significant fluctuations are observed throughout the study period (F(1,21)= .75, p= .39)(Table 3), with a frequency of 2.3% to 7.6% of all cases per year (Figure 1a). Affective disorders (Figure 1b) experience an upward trend in the 1990-2003 time period (r2= .76, F(1,12)= 39.7, p= .000), from 3.9% in 1990 to 13.9% in 2003, equal to a 3.5-fold increase in frequency. During the following years affective disorders decreases in frequency, reaching 4.97% in 2009, with a subsequent increase after 2009 leading to a frequency of 10.3% in 2014.
Anxiety disorders (Figure 1c) have a minimum frequency of 2.8% in 1997 and 1998 and a maximum of 9.13% in 2014. The increase over the entire time period is a significant one (F(1,21)= 18.34, p= .000)(Table 3), with the largest increment observed between 2007 and 2014, when the proportion of anxiety disorder doubled. Regarding the stress related, dissociative and somatoform disorders a downward trend is observed, from a maximum of 23.6% in 1991, to 6.4% in 2013, translated into a four time reduction in the total number of cases over time (Figure 1d).
Autism spectrum disorders showed the highest increase during the 1990-2014 study period (r2= .80, F(1,21)= 86.2, p= .000)(Table 3). Thus, if in 1990 through to the year 2000 the frequency of ASD was 3-6% of the total number of cases admitted to the clinic in one year, the percentage grew to 17-22% in 2005 to 2007, only to reach 39-42% in 2012-2014 (Figure 2a). Therefore, the frequency of ASD in the clinic has increased 12-fold in 2014 when compared to 1990. The second largest increase in frequency during the study period was observed for hyperkinetic disorders (Figure 2b). Between 1990 and 2002 the frequency of the diagnosis was relatively stable, with a mean of 7.6%. Starting the following year, however, the frequency of hyperkineti disorders began to rise from 10.4% in 2003 to
25.6% in 2008 and it reached 38-42% in 2012-2014 with a peak in 2012. This increase is significant throughout the entire study period study and the observed trend is almost linear between 2002 and 2014 (r2= .93, F(1,9)= 129.7, p= .000)(Table 3). Almost half of all cases were co-morbid with autism spectrum disorders (18.1% out of 38.8% in 2014).
Conduct disorders register a rise in frequency in 1990-2001, from 13.0% in 1990 to 21.9% in 2001 (r2= .67, F(1,10)= 20.5, p= .000). After reaching a maximum in
2001, the number of diagnoses within the group of conduct disorders began to decrease, reaching 11.9% in 2004 (r2= .86, F(1,10)= 66.8, p= .000) (Figure 2c).
Estimates based on averaging 3 consecutive years’ data, at the beginning of the study period (1990- 1992), in the middle (2001-2003) and at the end (2012-
2014) reveals the following (Figure 3): the most common discharge diagnoses in 1990-1992 were stress-related, dissociative and somatoform disorders (21.1%), followed by conduct disorders (11.9%); in 2001-2003, conduct disorders reached a peak frequency, with a proportion of 19.1%, the number of stress related, dissociative and somatoform disorders start to decrease (17.6%) and mood disorders also reached their highest level through the entire study period (12.2%); between 2012 and 2014, autism spectrum disorders and hyperkinetic disorders show a significant increase, each of these attaining a proportion of 40% of all the cases, conduct disorders start to decrease, reaching a similar frequency to the one observed in 1990-2014 (11.6%) and the proportion of anxiety disorders rises to 7.4% 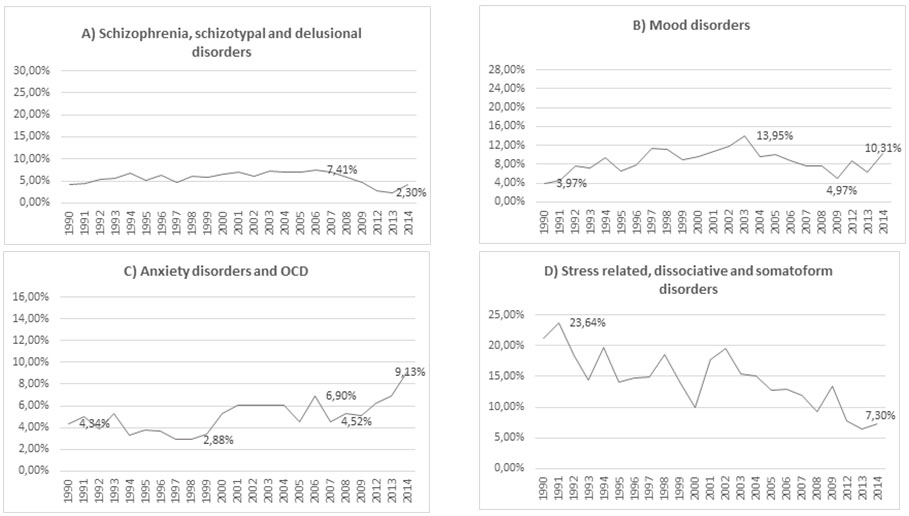 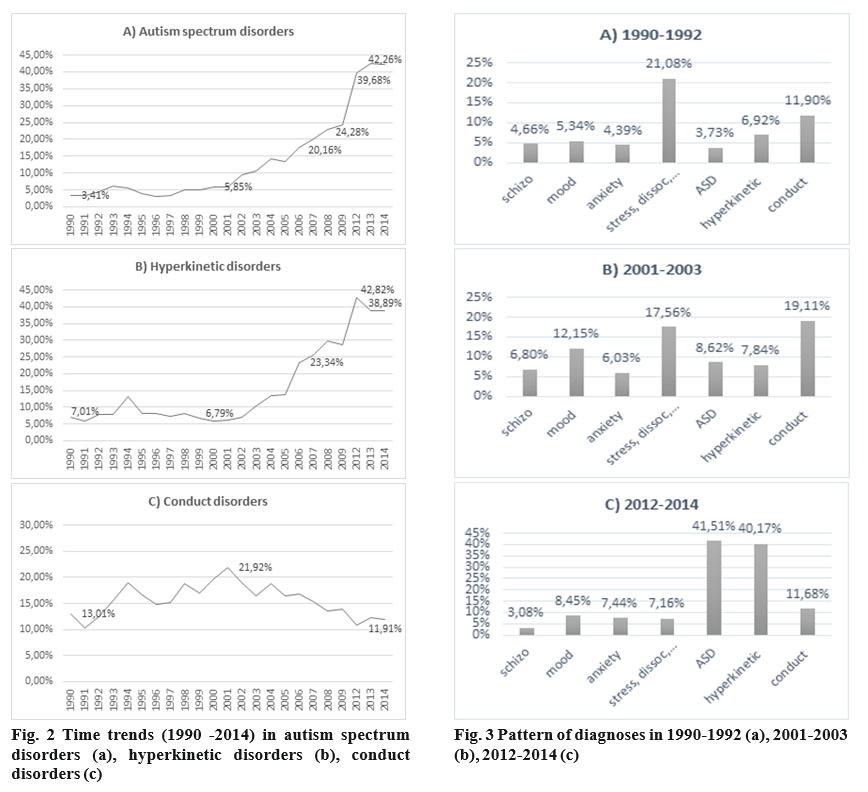