THE IMPACT OF TREATMENT AND DURATION OF PSYCHOSIS ON RESIDUAL SYMPTOMS

Introduction: Literature data suggest that a longer duration of untreated psychosis or discontinuities in antipsychotic treatment impair the disorder's prognosis resulting in residual symptoms and treatment resistance. Objective: To assess the impact of treatment and duration of psychosis on remission quality in outpatients receiving long acting injectable (LAI) antipsychotics. Methods: This double center prospective study included outpatients with schizophrenia, schizoaffective disorder, and bipolar disorder, currently in remission. The subjects received the following LAI antipsychotics: aripiprazole, olanzapine, risperidone or paliperidone for at least 3 months. The quality of remission was assessed using BPRS-E. Total duration of psychosis, the time interval from disorder's onset to LAI treatment, and duration of LAI treatment were measured. Results: We assessed 90 patients with psychosis receiving LAI antipsychotics. 47(52.2%) patients were men and 43 (47.8%) were women. The mean age of the subjects was 42.61 (SD±11.74). The sample consisted of 10 (11.1%) patients on aripiprazole, 41 (45.6%) on olanzapine, 3 (3.3%) on paliperidone, and 36 (40.0%) patients on risperidone. In 55 (61.1%) patients a mood stabilizer was associated. The mean BPRS-E in the sample was 39.15 (SD±13.91). The total BPRS-E score was significantly higher in patients with early age at onset (r=0.245; p=0.029) and where the LAI antipsychotic medication was introduced later in the disorder's evolution (r=0.276; p=0.013). Nevertheless, the use of the LAI antipsychotic treatment did not seem to influence significantly the BPRS- E score (r=0.087; p=0.44). We found no significant differences in BPRS-E scores between patients who received only LAI antipsychotics and those who had an adjunctive mood stabilizer. Conclusions: An earlier onset of psychosis and a longer duration of uncertain treatment adherence results in incomplete remission reflected by higher BPRS-E scores. LAI treatment may help in diminishing some residual symptoms.

INTRODUCTION
A longer duration of early untreated psychosis or discontinuities in antipsychotic treatment may impair prognosis resulting in residual symptoms and treatment resistance.
According to Lieberman and collaborators, schizophrenia is associated with a clinical deterioration that may begin in the prepsychotic phase. In this respect, early identification and intervention may improve the course and outcome of schizophrenia (1). Other authors state that duration of untreated initial psychosis is not a factor of poor prognostic early in the evolution of schizophrenia (2). A meta-analysis review conducted by Mesholam-Gately and collaborators on neurocognition in first episode schizophrenia patients suggested the occurrence of deterioration between premorbid phase and first episode phase, which is followed by deficit stability (3). When compared with first episode patients with schizophrenia, chronic patients performed worse on measures considered sensitive to deterioration (4).
Thus, a long duration of initially untreated psychosis or DUP in first episode schizophrenia patients is associated with: increased severity of negative symptoms (5), some specific executive dysfunction such as attention shifting problems (6), or a poorer clinical and social outcome reflected in persistent symptoms and impaired social re-integration (7).
Duration of illness prior to starting neuroleptic medication was considered the most important determinant of relapse in patients with a first episode of schizophrenia (8). According to Perkins and collaborators the shorter the DUP is, the greater the response to antipsychotic treatment (5). A longer DUP results in a slower and a poorer remission in first-episode schizophrenia patients (9). By contrast, Barnes and collaborators found no association between a longer DUP
and DUI (duration of untreated illness which is DUP with any prodrome) and severity of negative and positive symptoms or response to medication, with the exception of a tendency that a longer DUP may be associated with a lower level of remission on drug treatment (6).
Considering the hypothesis that a sort of progressive biological process (toxicity) acting in conjunction with psychological and social factors may induce brain deterioration, early intervention and treatment continuity might influence the outcome in patients with schizophrenia. A meta-analysis done by Wyatt revealed that stable schizophrenic patients where neuroleptics are discontinued and have relapses may experience difficulties in returning to their previous level of function (10). In chronically ill patients with schizophrenia, the withdrawal of antipsychotics leads to slow recovery of social performance (11).
Treatment continuity may be achieved through the use of depot or long acting antipsychotics. A sustained antipsychotic treatment may influence symptom severity and functionality in patients with psychosis. Lasser and collaborators found that some of the patients considered “stable” but did not meet the symptom-severity criteria of remission may experience significant improvement in multiple symptom domains after initiation of long acting injectable risperidone (12).
The objective of the present study is to assess the impact of treatment and duration of the psychosis on the quality of remission in outpatients receiving long acting injectable (LAI) antipsychotics.

METHOD
We conducted a double center prospective study in outpatients with psychosis currently in remission. The subjects fulfilled the criteria of the following ICD 10 diagnostic categories: schizophrenia, schizoaffective disorder, and bipolar disorder. All patients received an injectable long acting (LAI) second generation antipsychotic for at least 3 months.
The following data were analyzed: socio- demographics, smoking habits, severity of the psychiatric residual symptoms (BPRS-E), and time intervals such as:
-total duration (months) of psychosis (DP) which corresponds to the time interval from the disorder onset to the present assessment
-the time interval (months) from disorder’s onset to LAI treatment initiation (pre LAI treatment) which refers to a period characterized by oral treatment, partial adherence to oral treatment or absence of treatment
-duration (months) of LAI treatment corresponding to the time interval from the LAI treatment introduction to the present assessment.
We measured the severity of psychiatric residual symptoms with BPRS-E (Brief Psychiatry Rating Scale – Expanded). It is based on the 16 items BPRS (13) and has
24 items (14) comprising four symptom dimensions: depression/anxiety, psychosis, negative symptoms and activation. BPRS-E is mainly used to quantify the severity of psychotic symptoms (15). Leucht and collaborators realized a correlation with the original 16 item BPRS (Brief Psychiatry Rating Scale) scores, and the CGI (Clinical Global Impressions) – severity scores (16).
The study protocol and the informed consent were approved by the Scientific Research Ethic Commission of “Victor Babes” Timisoara University of Medicine and Pharmacy. This project was conducted in accord with the Helsinki Declaration. The authors have undertaken this study in the course of their employment, with no funding from any other source.
Statistical analysis: IBM SPSS Statistics (version 20) was used to analyze data. The Shapiro-Wilk normality test revealed a non-gaussian data distribution. Therefore, to analyze group differences, we applied non-parametrical tests (Mann-Whitney U). Associations between scores were assessed with Spearman’s correlation coefficients (for numeric data). The χ² (chi-square) test was used to compare categorical variables. All results were two-tailed. We set the level of significance at 0.05.

RESULTS AND DISCUSSIONS
We assessed 90 outpatients receiving LAI antipsychotics. The sample’s socio-demographic and clinical characteristics are presented in Table 1. We found no significant differences between men and women concerning the mean age at present assessment and the mean age at disorder onset. Literature data report that schizophrenia occurs earlier in men than in women. Lewine and collaborators suggest that the gender differences in age onset of schizophrenia are the result of different diagnostic criteria systems. When using the broadest or the narrowest diagnostic sets of criteria for schizophrenia, a similar proportion between males and females appears. (17).
Table 2 shows the sample’s characteristic in reference to the doses of the LAI
Because tobacco use may interfere with blood levels of some antipsychotics (in case of olanzapine), we analyzed the patients’ smoking habits. In this respect, men were more frequently smokers than women (χ²=7.98, p=0.005) and smoked significantly (Z=-3.075, p=0.002) more cigarettes (mean number of cigarettes per day=9.13, SD=12.55). Nevertheless, there were no significant correlations between the number of cigarettes per day and the mean age at the present assessment, the mean age at disorder onset, or the time intervals related to psychosis and treatment (DP, pre-LAI treatment interval, duration of LAI treatment). Neither smoking nor the number of smoked cigarettes per day did influence the BPRS-E scores.
The mean duration of psychosis in the sample was of 139 months (SD=132.37). Men had a longer DP than women, but not statistically significant. The BPRS-E total score was significantly higher in patients in whom the onset of the disorder occurred at an early age (r=0.245; p=0.029). Figure 1 illustrates the relationship between the DP and the BPRS-E total score.
The mean duration of pre-LAI treatment was 121.98 months. (SD=128.39). Men had a longer pre-LAI treatment duration than women (Z=-2.166, p=0.03), but not a significantly longer duration of psychosis (Z=- 2.014, p=0.44). This result, in association with the observed lack of gender differences in the disorder age onset may imply that the LAI treatment was introduced earlier in women. The total BPRS-E score was significantly higher in subjects where the LAI antipsychotic medication was introduced later in the disorder’s evolution (r=0.276; p=0.013) as shown in Figure 2. 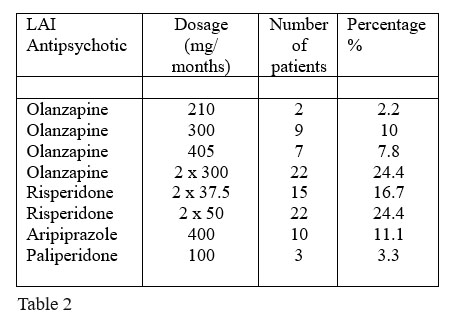 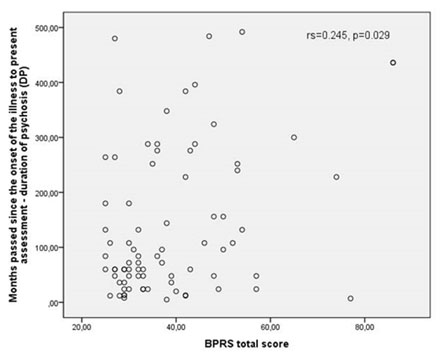 Figure 1. The relationship between and BPRS-E total score and the duration of psychosis 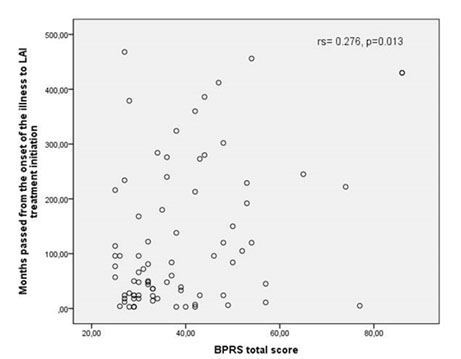 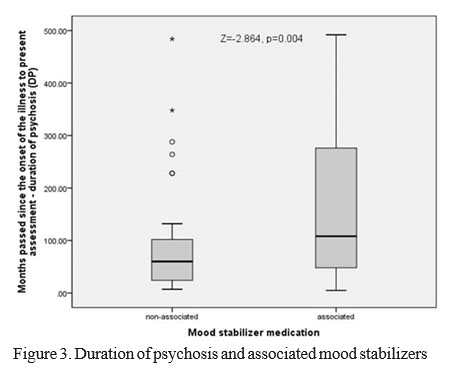 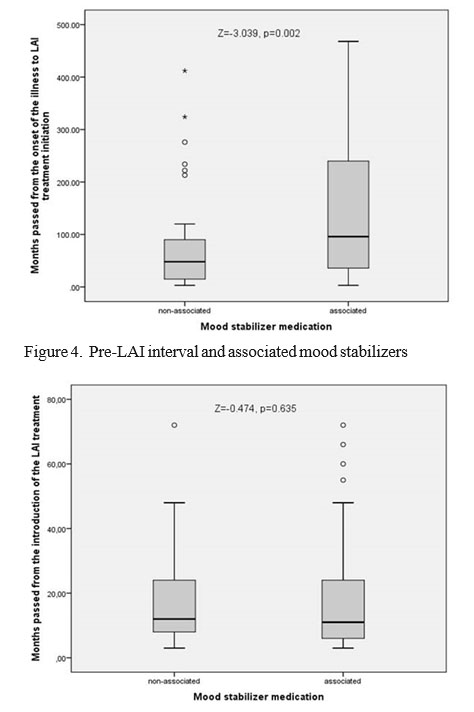 CONCLUSIONS
An earlier onset of psychosis and a longer duration of inconstant treatment with oral antipsychotics (pre-LAI treatment interval) may result in incomplete remissions reflected by higher total BPRS-E scores and higher subscores for specific and nonspecific psychotic symptoms. Men have longer pre-LAI time intervals, are more frequently tobacco users and smoke more cigarettes than women. This may result in a higher total BPRS-E score found in male subjects.
Although continuous treatment under LAI antipsychotics might not influence the total BPRS-E scores, it may help in diminishing anxiety and some residual symptoms such as conceptual disorganization.