FACTORS ASSOCIATED WITH MEDICATION ADHERENCE IN PATIENTS WITH SCHIZOPHRENIA

From the perspective of any disorder with a significant degree of chronicisation, including schizophrenia, ensuring patient adherence to medical treatment starting from the first episode of the illness is essential. The treatment’s main objective for patients with schizophrenia is full control of symptoms with minimal impact on functioning, thus ensuring optimal quality of life. The chronic evolution of the disorder translates into the fact that most patients require antipsychotic medication for long periods of time, sometimes life-long, in order to achieve good control of symptoms and to prevent the recurrence of acute psychotic episodes and progressive cognitive impairment that are associated with t h e m   ( 1 , 2 ) .   T h e r e f o r e ,   c o n s t a n t   a d h e r e n c e   t o antipsychotic treatment is a major determinant for a favorable outcome. Unfortunately, a significant proportion of patients do not adhere to therapeutic indications. Treatment non-adherence rates in patients with schizophrenia cited in the literature varies, depending on the authors and the definition itself: between 20% and 89% (3) with an average of 49% of cases (4). The most significant consequences of antipsychotic treatment discontinuation are: increased number of relapses and hospitalizations, increased severity of symptoms during relapse, worsening of residual symptoms, substance abuse, and increased social cost (5,6,7). Although factors which influence adherence frequently overlap or influence each other, it’s still possible to distinguish factors related to: the patient (psychopathology, cognitive impairment, age, gender, personality traits, absence of insight, cultural beliefs regarding illness and health), treatment (tolerance, duration of treatment, onset of action and efficacy, unrealistic expectations in terms of benefit / risk ratio, delayed therapeutic effect and early side effects, subjective discomfort caused by the side effects), environmental (social environmental attitude towards the psychiatric treatment, availability of the family to support, assist and supervise the treatment, social support, stigma, financial situation), therapist-related factors (patient- psychiatrist relationship, therapeutic alliance, informing the patient about the disorder and treatment, perceived interest regarding the therapist’s interest towards the patient’s problems) (8,9,10). Adherence to treatment in schizophrenia is also affected by the duration and the consequences of discontinuing the medication: the consequences of non-adherence are mitigated by the insidious manner in which symptoms develop after treatment is discontinued so that the relationship between cause and effect becomes sometimes blurred both for patients and family, which can lead to maintaining non- adherent behavior. Although this grouping of factors is somewhat artificial, it can help the clinician to detect the various reasons for which the patient has developed non- adherence issues and to intervene accordingly.
The aim of the study was to assess the rate of non- adherence to antipsychotic treatment in outpatients with schizophrenia, to identify socio-demographic and clinical factors that may influence adherence to treatment and to record the reasons given by the patients as to why adherent or non-adherent behavior occurred.
MATERIALS AND METHODS
The study involved 60 patients diagnosed with schizophrenia from various psychiatric private practices located in Timișoara, Romania from October 2014 to October 2016. Inclusion criteria in the study were age between 18 and 65 years, the International Classification of Diseases 10 (ICD-10) diagnosis of paranoid schizophrenia, and the prescription of at least one antipsychotic agent. Cases of abuse or addiction to alcohol or drugs and those with limited capacity to give valid consent were excluded from the study. All patients used conventional or atypical antipsychotics and the method of administration was oral.  Upon study entry, patients gave their informed consent and the research was approved by the local ethics committee. The study was conducted according to the principles stated in the Helsinki Declaration and the authors received no funding from any source.
Demographic and clinical characteristics of the patients (gender, age, marital status, educational status, professional status, the clinical form of schizophrenia, the duration of illness, number of hospitalizations, and antipsychotics used) were recorded. Data was obtained from the medical records supplied by the clinician and from the patients during the interview.
The term “adherence” was defined as the degree to which individuals follow directions for taking prescribed medication. Medication adherence was assessed through physicians` subjective perception, by direct questioning the patient or by questioning a family member. Adherence was assessed monthly by using the report given by a family member designated as responsible for this task.  Non-adherence was defined as taking less than 75% of the prescribed dose within the preceding 30 days (adapted from Buchanan et al.,1992) (11).
At baseline, positive and negative symptoms and severity of hallucinations and thought disorder (conceptual disorganization) were quantified using BPRS (Brief Psychiatric Rating Scale) – the extended version, with 24 items (12).
An abbreviated version of the Rating of Medication Influences (ROMI) Scale was used to assess the attitudinal and behavioral factors that influence medication adherence (13). The ROMI Scale is a self- assessment scale which has two parts, the first part being semi-structured and includes questions about the patient’s lifestyle, treatment, patient and family attitudes towards treatment, active/passive adherence. The second part of the scale is divided into two sections, comprising the main reasons for adherence or non-adherence. This study used the second part of the ROMI Scale.
After clinical interview, the BPRS Scale and the ROMI Scale were applied at baseline. We divided the patients into two groups (adherent and non-adherent to treatment), that were assessed comparatively. The BPRS was used in the follow-up visits (on a monthly basis).
Data were analyzed using IBM SPSS Statistics for Windows (version 20). Statistical data processing calculated the statistic descriptive indicators, frequency, mean and standard deviation for numerical data. Because of the relative small sample size, a normality test was applied (the Shapiro-Wilk normality test). The test revealed a non-gaussian data distribution and therefore, to compare groups, we used a non-parametrical test (the Mann-Whitney U test). For comparing categorical data, we utilized the χ² test. The level of significance was set at 0.05. All results were two-tailed.

CONCLUSIONS
In the present study, we found a high rate of non- adherence during the 6-month follow-up of outpatients with schizophrenia. Non-adherent behavior was more frequently found in the elderly and in those living alone. D i s o r d e r d u r a t i o n a n d t h e m e a n n u m b e r o f hospitalizations per case were higher in the non-adherent group, the second variable suggesting the role of risk factor for relapse that non-adherence to treatment represents. In the opinion of the assessed patients, the most important reason for adherence was the perception of the daily benefit brought by the medication and for non- adherence the discomfort caused by the side effects of the antipsychotics. Identifying and understanding the reasons for non-adherence to treatment represents a strategy of improving the patient’s commitment in long-term therapy. The results suggest that outpatients with schizophrenia
who have various reasons for non-adherence are associated with actual non-adherence and the ROMI Scale may be useful for predicting such behavior. Improved treatment adherence in schizophrenia can reduce the risk of relapse and its morbid consequences and perhaps promote higher functioning through better therapeutic engagement.
LIMITATIONS
Our study must be interpreted in light of some limitations: the relatively small patient samples, adherence wasn’t studied according to antipsychotic classes, which could have (potentially) influenced the end results. Like other studies of medication adherence among individuals with psychotic disorders, the present study was hampered by inherent selection biases, because individuals who consent to participate in such research and complete the required assessment are likely to be more compliant in taking medication.
AKNOWLEDGEMENTS
All authors have contributed equally to the present study and approved its final version.
DISCLOSURES
The authors have no conflict of interest to disclose for the present article.
LIST OF ABREVIATIONS
BPRS: Brief Psychiatric Rating Scale
ROMI: Rating of Medication Influences
Table 1 – Socio-demographic data – adherent / non-adherent group 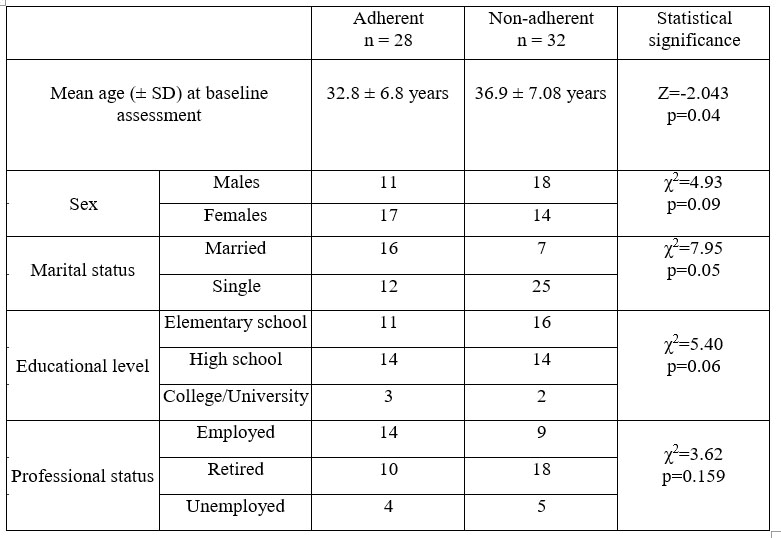 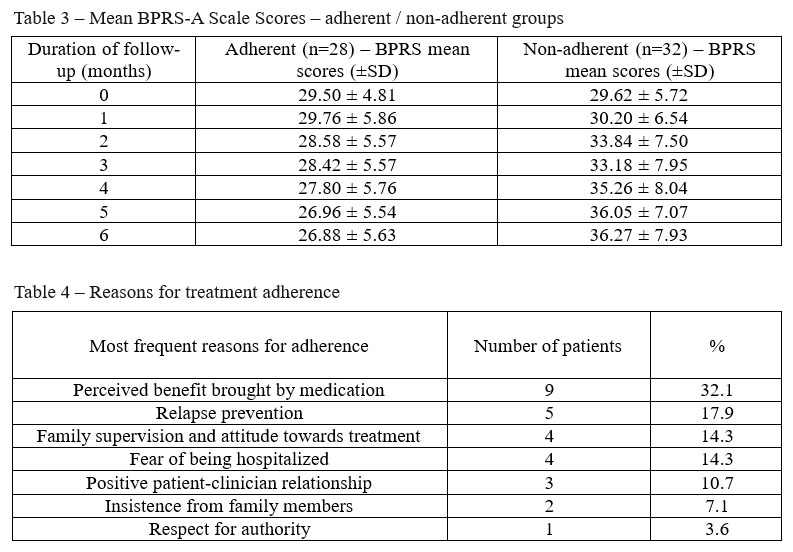