Personality represents a complex set of behaviors, characteristic for each human individual, behaviors which leave their mark definitively on how to establish a relationship with the others, with the surrounding world, how to perceive oneself in relation to the social environment, in the vast diversity of life situations that the individual may go through. Personality is the result of various drive, emotional and cognitive components integration.(1)
The study of the schizotypal personality disorder (SPD) is important from a clinical point of view, often being underestimated and underdiagnosed. SPD represents, also an intermediate phenotype spectrum and, consequently, can offer a better understanding of the genetics, pathogenesis and treatment of associated mental disorders. Schizotypal personality disorder, is a term introduced for the first time in DSM III. SPD implies: ideas of reference, odd beliefs or magical thinking, that influence behavior, unusual perceptual experiences, including bodily illusions, odd thinking and speech, suspiciousness or paranoid ideation, inappropriate or constricted affect, behavior or appearance that is odd, eccentric or peculiar, lack of close friends or confidants other than first-degree relatives, excessive social anxiety that tends to be associated with paranoid fears.(2)
The prevalence of this personality disorder is of 3%, and more frequent in male gender.(3) The factors favoring the development of schizotypal personality traits are: genetic factors – parents or relatives diagnosed with schizophrenia(4), in childhood – parental neglect, early separation(5), major traumas, dysfunctional families(6) and disharmonic traits developed in the course of the personogenesis.

SUBJECT MOTIVATION
Family, parental and social factors can influence the pathological personogenesis starting with the very primary network of social support. Severe maladaptive traits along with relational difficulties may lead to the onset of certain psychotic disorders. In addition, maladaptive traits favor the contact with negative life events and attitudinal instability. We have chosen the case of a patient with a rich biography and a persistent impaired functioning in roles.

CASE PRESENTATION
34 years old patient S.M., was urgently admitted to Psychiatry Clinic II, being brought by the Police and Gendarmerie after a conflict within the Mobile Emergency Service for Resuscitation and Extrication Unit (SMURD) where he displayed physical and verbal hetero- aggressiveness towards the police agents present in the medical service unit. The case ended up in the SMURD service at his own initiative, wishing to talk to the medical staff about the Revolution of 1989, about the protest that took place at national level, about the political change that will follow, disturbing the activities of the emergency medical unit.
The patient comes from an urban environment, born in a modest family, with two children, being the firstborn sibling, father – accountant, mother – primary school teacher. Currently, he is single and lives in Spain about 3 years. He denies any personal medical history.
Personality development: In childhood, intrafamilial relationships were tense, the relationship with his father was poor, the man being an alcoholic, physically and verbally aggressive towards mother and children. During his puberty the patient is considered by the other children a little odd, does not obey rules imposed by teachers, school, parents, but has very good school results. During his puberty, he distinguishes himself from his classmates and entourage by his conduct and eccentric clothing, manipulating tendency, and he describes himself as being “more special than the others”, but he excels in his studies. Adult age: In 2002 he enrolls at the Faculty of Economic Sciences, which he attends for two years at his parents urging. In 2005 he enrolls in the Police Academy, this being his own choice, asserting that he wants to do justice in the world and in the corrupt system, but fails the entrance exam, although he comes very close to the admission mark, fact that leads to a long period of social isolation, refuses to communicate with the people around him, gives himself credit for special qualities and high moral standing, starts writing down all the meticulous details of his life in a journal. In 2007 leaves the country to go to work in Spain, England, The Netherlands. In 2014 due to a romantic disillusionment, consumes psychoactive substances (Tetrahydrocannabinol) in an abusive manner for two years.
He has attended high school, 12 grades, and his first job was at the age of 22 as a bartender in Spain where he is still working at the moment.
He denies coffee and cigarette consumption, occasionally drinks alcohol, uses drugs: history of psychoactive s u b s t a n c e s u s e f o r t w o y e a r s e v e r y d a y (Tetrahydrocannabinol).
Military service not carried out.
His values and life plans are selfish, adjusted to imaginative richness.
Disease history: first psychotic episode appears in 2016 dominated by: derealization, depersonalization phenomena, megalomaniac delirious ideas, of grandeur, reformation, paradoxical affective reactions, addictive tendencies, attitudinal oddness. In 2017, after a period of about one year, in which he used psychoactive substances and has completely neglected his psychotropic treatment, a second psychotic episode appears, similar to the first one but less expressed.
After his remission, the patient’s self-concept is: “I am an interesting person with many special abilities like a sixth sense, I can get to know a person in depth, I can manipulate all the persons around me, I feed off people’s admiration, I like to be the center of attention, I’m the man who will change the world to a better place, if you help me”. His concept about the world: “I want to know as many people as I can, together we can change the world, the country”. His concept about the future: “I want to become an important person, because I have a particular vision about life, mankind, nature, politics”, “healthy-wise-strong- handsome-happy-rich, but there are values in the heart and soul that money cannot buy”.

RESULTS
We applied to the patient a series of assessment questionnaires of categorical and dimensional personality after the remission of the psychotic episode.
TCI – Temperament and Character Inventory
It is a dimensional questionnaire that derives from Cloninger’s seven factors model:
-4 temperaments: Harm Avoidance, Novelty Seeking, Reward Dependence, Persistence
-3 characters: Self-Directedness, Cooperativeness, Self- Transcendence (9)
Character traits can confirm us the presence or absence of a personality disorder, and the temperament ones help us with the categorical diagnosis.
In this reference case it is confirmed the character deficiency specific to personality disorders with low values of Self-Directedness and Cooperativeness and temperament distortions such as high values of Novelty Seeking and low values of Harm Avoidance and Reward Dependence(Figure 1)
From the Self-Transcendence perspective, described by Cloninger as the capacity to identify oneself as an integral part of the universe (10) – the patient confirms himself as imaginative, intuitive, acceptant and spiritual – pathognomonic attributes and constantly present in the schizotypal personality structure.(Figure 2) 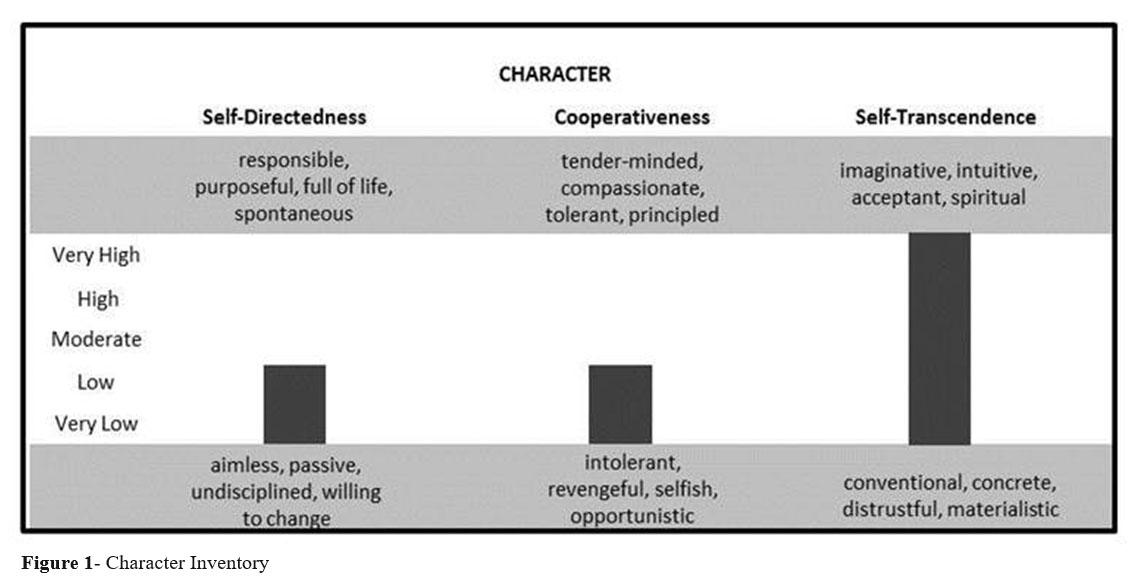 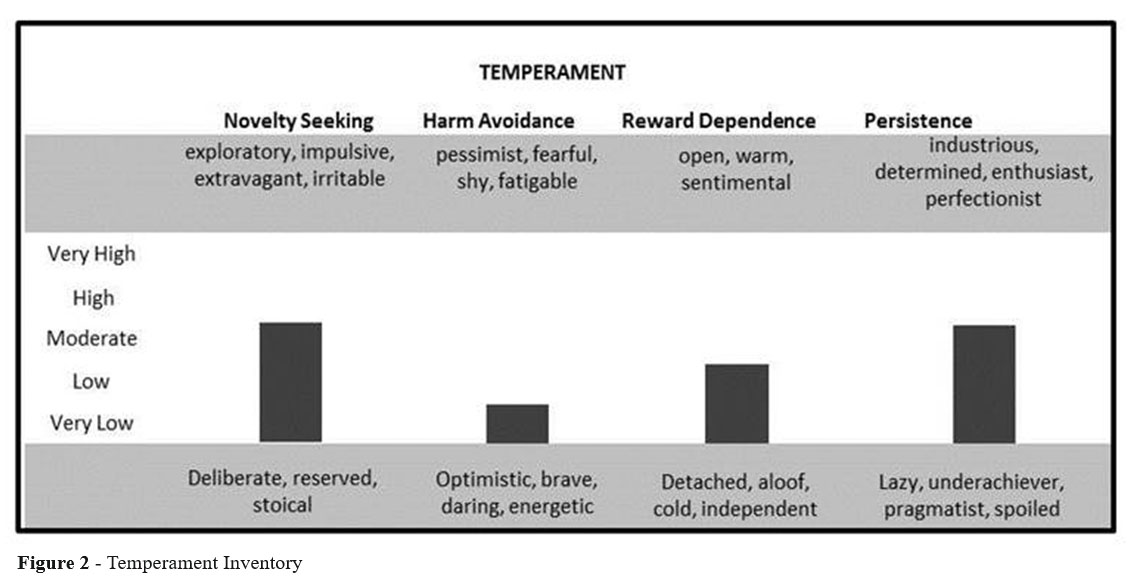 PID-5 is a dimensional questionnaire having as starting point the alternative model DSM 5 – brief form of the five factors model in which maladaptive traits are emphasized. It assesses 25 personality trait facets including: Anhedonia, Anxiousness, Attention Seeking, Callousness, Deceitfulness, Depressivity, Distractibility, Eccentricity, Emotional Lability, Grandiosity, Hostility, Impulsivity, Intimacy Avoidance, Irresponsibility, M a n i p u l a t i v e n e s s , P e r c e p t u a l D y s r e g u l a t i o n , P e r s e v e r a t i o n , R e s t r i c t e d A f f e c t i v i t y, R i g i d Perfectionism, Risk Taking, Separation Insecurity, Submissiveness, Suspiciousness, Unusual Beliefs and Experiences and Withdrawal, each trait facet consisting of 4 to 14 items.
The 25 specific trait facets (groups of 3-9) can be combined to yield indices of five broader trait domains of: Negative Affect, Detachment, Antagonism, Disinhibition, Psychoticism .(11)(Figure 3)
When applying PID-5 it describes the patient as eccentric, with perceptual dysregulations and odd thinking – trait facets of the Psychoticism domain. In addition to these traits, there are also certain traits developed which are not characteristic to the schizotypal personality within the Antagonism and Disinhibition domain, traits which explain the high values of Novelty Seeking from Cloninger’s model (e.g. Attention Seeking) and low values of Conscientiousness within the Big five model (e.g. Irresponsibility, Distractibility) described later. These differences confirm the rigidity of categorical models in relation to the multitude of cases of mixed personality disorder and umbrella diagnoses, and at same time, they help us in formulating the particularities of the case.(Figure 4) 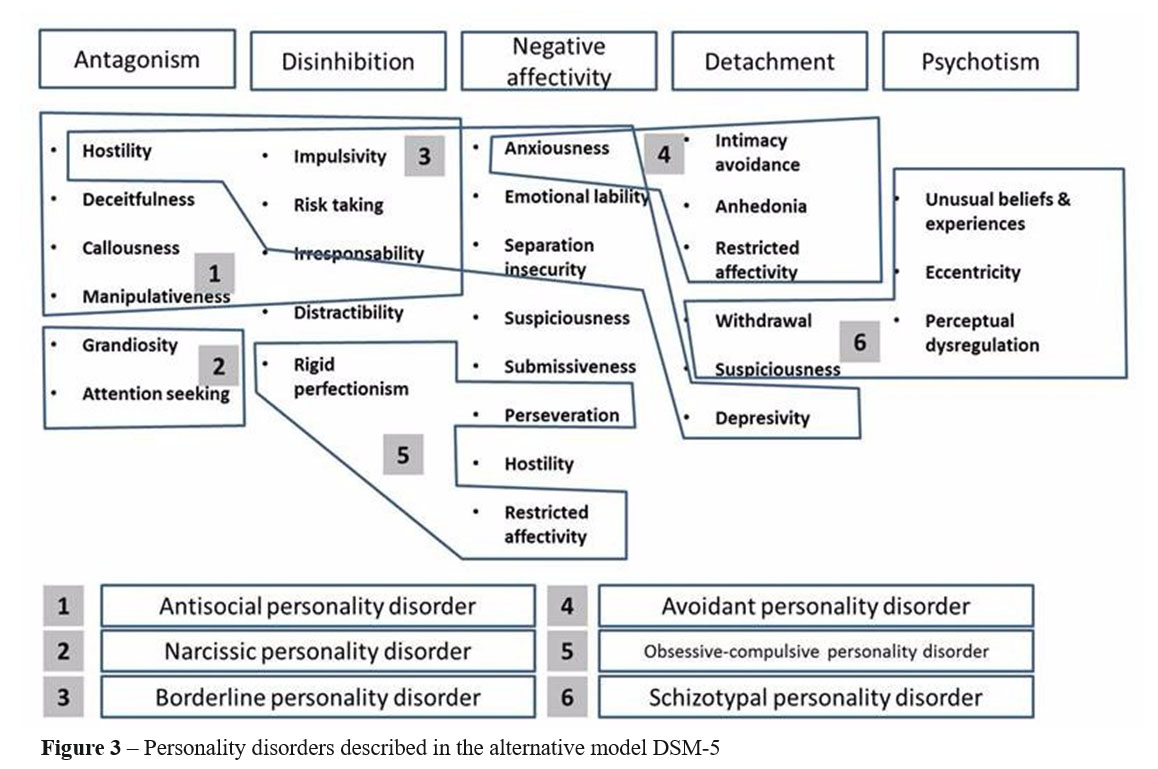 DECAS – Openness, Extraversion, Conscientiousness, Agreeableness, Emotional Stability
It is a questionnaire based on a dimensional model with five dimensions each with 6 facets:
1.Extraversion: Warmth, Gregariousness, Assertiveness, Activity, Excitement Seeking, Positive Emotions
2.Agreeableness: Trust, Straightforwardness, Altruism, Compliance, Modesty, Tender-mindedness
3.Neuroticism: Anxiety, Angry Hostility, Depression, Self-consciousness, Impulsiveness, Vulnerability
4.Openness: Fantasy, Aesthetics, Feeling, Actions, Ideas, Values
In this patient’s case: high values of Openness are consistent with the high values of Self-Transcendence from Cloninger’s model, and the low values of Conscientiousness and Agreeableness confirm the negative correlation between these domains and the Antagonism and Disinhibition domain of the alternative model described in DSM-5.(Figure 5)

CASE PARTICULARITY
It is confirmed the lack of social anxiety in a patient with schizotypal personality disorder and high values of Novelty Seeking, specific to Cluster B. Despite his rich biography and psychotraumas in the first part of the personogenesis, the patient does not have borderline type personality traits. The original style up to “psychoticism”, characteristic to the schizotypal, puts him at a disadvantage in relation to drugs. The contact with the substances may facilitate anytime a relapse in psychosis.

CONCLUSIONS
Schizotypal personality disorder remains the border between axis II and axis I in psychopathology, many times being the starting point of acute psychotic disorders, of the paranoid form of schizophrenia and maybe of a paraphrenic sideslip.
Self-Transcendence as a constant attribute of the schizotypal personality disorder that defines the spirituality level, keeps being at all times the explanation of that distance between the psychopath’s “pole” and the genius’s “pole” which tends to diminish on the territory of a continuum of traits under the shape of a circle, from the interpersonal circumplex model (figure 6). 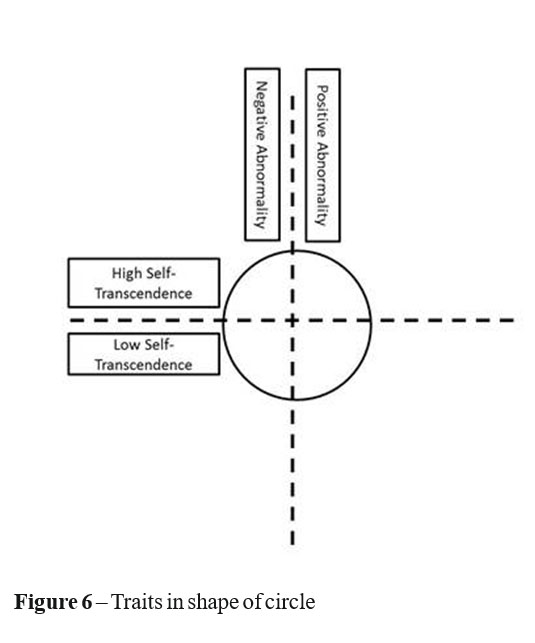 This spiritual attribute, may be at the same time, the chance or mischance of the patient described, under the circumstances in which it reaches the level of extreme manifestations.