Our objectives were the prioritization exercises of main factors related with psychiatric residents' decision of emigrate could be a starting point of elaboration of a strategy of reforms. The study is cross sectional evaluation at national level, on a randomised selected sample of Romanian psychiatric residents' opinion on factors which influence decision of migration in EU countries. In results we noticed that 75% of psychiatric residents intend to work abroad (71.66% for a limited period of time and 28.33% intend to emigrate) and 5% intend to leave the speciality. “Better working conditions” for 37.31% residents and “respect and appreciation by colleagues” for 17.91% represent the most important factor for decision to emigrate. “Being far from family members” was considered by 64.18% of responders as an important disadvantage of working abroad. As main conclusions, we discover the factors which influence their decision to emigrate represent the starting points on futures reforms in educational and medical system in psychiatry. 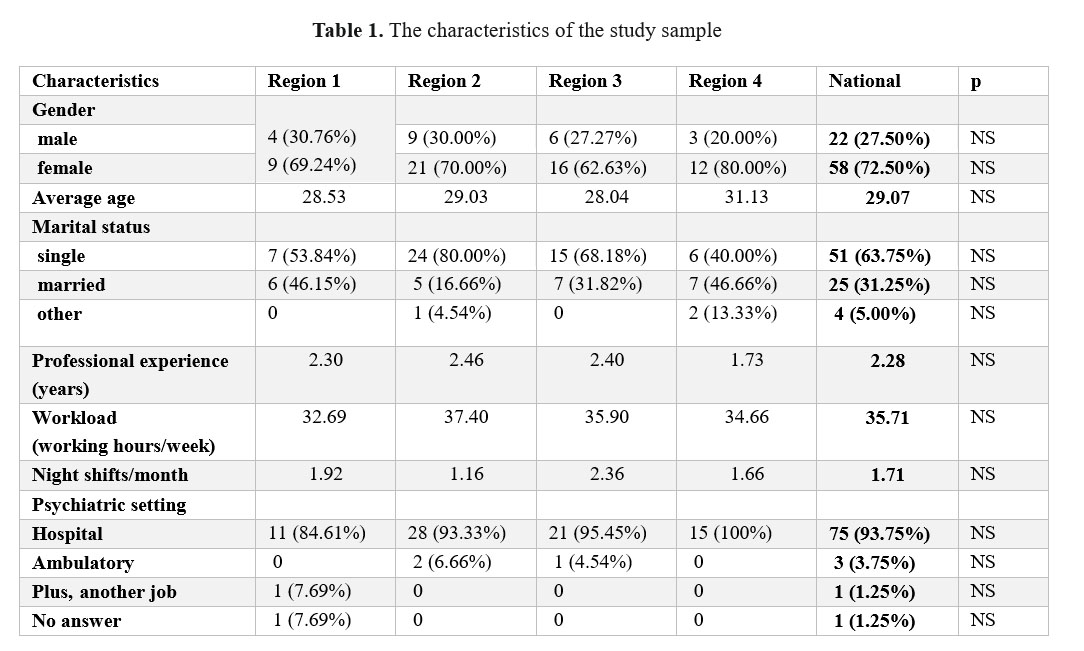 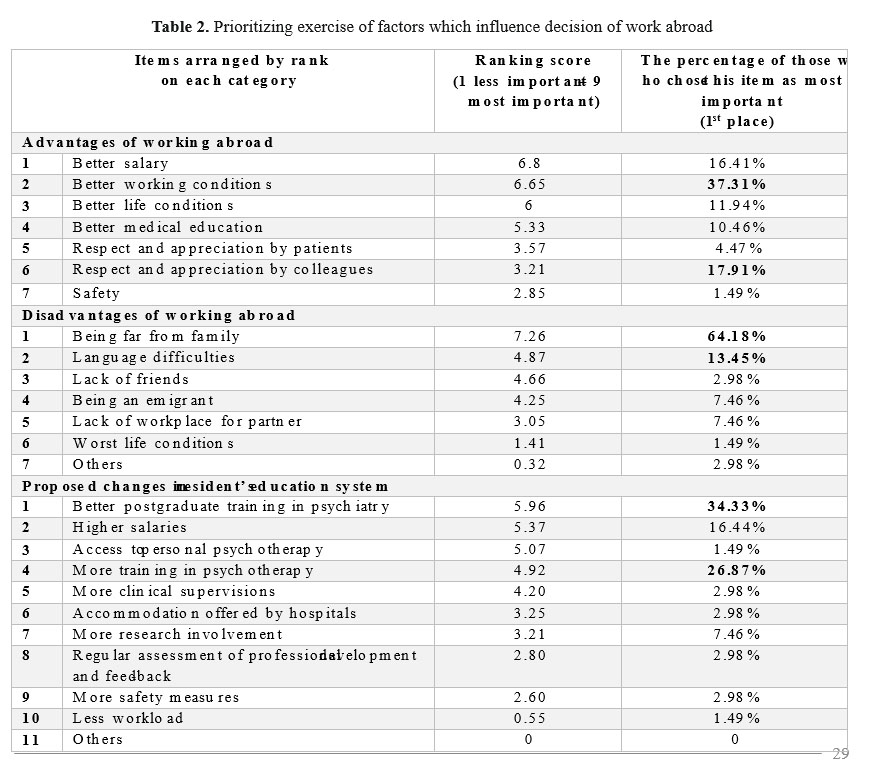 DISCUSSIONS
The items as better working conditions and better living conditions which are highlighted by Romanian residents are common with their colleagues from other low-income countries (5-8). There are also items quoted as important which are specific for Romanian population as respect and appreciation by colleagues and the importance of family relationships.
The Government and especially the Ministry of Health were concerned about the mental health workforce’ deficits and about the residents’ condition and as a consequence of these facilitated some specific measures (3). There were some measures concerning the availability of workplace, the residents and specialists’ salary, the accommodation conditions for young adults, the number of residents admitted in training and changes in national training program.
For a better distribution of the mental health workforce, it was organised for several times, a national exam for the residents entry on psychiatric training associated with 5 years’ work contract after the end of psychiatric training on a specific working places (with high deficits in qualified personnel). Even the residents participated with enthusiasm to this exam; the measure had not expected result because not all residents respect the contract after the end of training period and the workforce deficit persist. The salaries of residents and specialists increased gradually in last decade, but still remain 2 – 6 times lower than average salary in EU countries. There were states that supported facilities for a bank loan for apartment acquisitions for young adults.
There are several changes which have been done in national psychiatric curriculum in order to improve the quality of postgraduate psychiatric training as: increasing recommended duration of training in psychotherapy, rotation on different psychiatric sectors and sub- specialities highly recommended, child and adolescent psychiatry training, changes in total duration of training, etc. The effect of these changes was very low in practice because of the difficulties related with implementation of these recommendations.
The future strategy of reforms in educational and medical system in psychiatry has to implement the proposed changes in practice and take measures which facilitate changes in medical system simultaneously. If the clinical and academic workload of trainers is high the time allocated to mentoring and supervision of residents is low. Any changes involved both academic and clinical setting. The majority of residents have their experience only in psychiatric hospitals because of the lack of access to specific psychiatric settings (forensic, addiction, liaison p s y c h i a t r y, c o m m u n i t y p s y c h i a t r y, d a y – c a r e , psychotherapeutic centres) which are present only in few locations or in private sectors. The involvement of different sectors of psychiatry in educational process could be useful. For improving the workplace condition of residents, the medical hospitals where residents work have to be adapted not only to medical tasks but also to educational process. The lack of space in hospitals, absence of a room for residents was underlined as important factor of stress and burnout in psychiatric residents (9). Complex measures have to be taken.
The training in psychotherapy is a part of psychiatric curriculum but there are only few places where is put in practice because of the lack of trainers and of financial and practical conditions for being done. The assessment of the quality of a training program includes academic aspects,
working conditions and workplace assessment. The evaluation of academic aspects includes the qualification of trainers, an increasing number of trainees allocated to one supervisor, structure of theoretical courses, cases presentation, problem solving cases (10). It is important to understand the real conditions of training and accessibility to supervision in order to assess the workplace. Supervision have to include clinical supervision, individual supervision and supervision in psychotherapy. Assessment of working conditions also includes workload, numbers of duty hours, number of patients examined by each trainee per day, presence of a trainees’ room and a consultation room (10). An international independent team of assessment of training centres, as UEMS (European Union of Medicines Specialists) recommended, could be helpful in identification of specific measures need it in each setting.
STUDY LIMITATIONSThe sample was randomly selected at the national level and it is considered representative for a group of Romanian residents in psychiatry. Study limitation could be related with the fact that the results could be influenced by the personality traits of responders, which was not evaluated.
CONCLUSIONS
The factors which influence residents’ decision to emigrate represent the starting points on futures reforms in educational and medical system in psychiatry.
Implications for Academic Leaders
-workplace assessment has to be part of training program assessment
-the minimum training in psychotherapy is need it as part of postgraduate psychiatric training
-postgraduate training could be improved with constant evaluation of individualised resident educational needs ACKNOWLEDGEMENTS
We are grateful to the Mr Chiurciu Catalin from National Romanian College of Physicians, which contribute with the official data collection.
DISCLOSURE
The authors have no competing interests to disclose.