Schizophrenia is a mental disorder in which positive symptoms (hallucinations, delusions, conceptual disorganization, and behavior), negative symptoms (flat emotion, apathy, anhedonia, inappropriate emotional responses) and cognitive dysfunction are considered cardinal symptoms. (1)
According to current clinical data, the term „positive” describe the content of a symptom which represents an exaggeration of a function or behavior „which does not occur in normal people.” Therefore, its contents can be described as florid and measurable. On the other hand, a „negative”  symptom describes a deficiency or absence of a function or a signal, status or „behavior which does not occur in normal people” (2)
According to the Clérambault, a negative symptom is a „deficit” or „inhibition”. (3)
Cognitive dysfunction in schizophrenia appear defined as decreased ability of abstraction and executive functions and by default that, decrease the ability of understanding and processing the information.
Hostility and aggression are common in major psychiatric disorders (schizophrenia, schizoaffective disorder, bipolar affective disorders), aggressive behavior constituting a diagnostic criterion for certain personality disorders: antisocial disorder and borderline disorder. Aggression is most common in young men and in people with a history of violence, impulsivity, substance abuse and nonadherence to treatment. (4)
Aggression can be defined as intent to injure another person physically or psychologically, with the potential to induce violence when is uncontrolled (5).
In 2000 Arseneault et al. (6) demonstrate in their study that in patients with psychosis the probability to commit violent acts is 4 times higher than in the general population, while patients suffering from schizophrenia are responsible for about 10% of significant acts of aggression; they are defined as „attacks on a person or property of another or self-mutilation, with a deliberate intention to destroy.”
In schizophrenia, aggression it is heterogeneous in terms of etiology and clinical, being directly linked to hallucinations and psychotic symptoms, delusions and / or conceptual and behavior disorganization (7). The i n c i d e n c e o f a g g r e s s i o n a m o n g p a t i e n t s w i t h schizophrenia hospitalized was related to the level of aggression and anxiety at admission (8), aggression and violence during previous hospitalizations (9), positive symptoms (10), paranoid type of schizophrenia (11), hospital environmental factors (12.13), neurological disorders (14) and noncompliant treatment (15). In data published in 2006 by Mojtabai, it was shown that 5.1% of
38 132 adults showed psychotic symptoms are associated with a fivefold increase in the risk of aggression (16).
In the study led by Soyka in 2002, data regarding the prevalence of aggression and violence in individuals diagnosed with schizophrenia vary greatly depending on the time of conceptualization and evaluation of it, but Sanders et al. (2000) showed that the risk of aggression and violence is often overlooked even in patients with potentially aggressive cert. (17.18).

Material and method:
The research was performed on 26 patients diagnosed with schizophrenia and schizoaffective disorder. The diagnosis was established according to DSM-V (4) and ICD-10 (1). The group consisted mostly of men from urban areas, with an average age of 37, most subjects with secondary education. It were applied the PANSS scale (19) with subscales PANSS positive PANSS negative and PANSS general scale, YMRS scale(20), HAM-D scale (21), HAM-A scale (22) and aggression questionnaire Bush & Perri (1992) ( 23) with four subscales (physical and verbal aggression, anger, hostility).
YRMS scale application in schizophrenia has been suggested by the fact that emotional expressiveness may contribute to aggression and violence as behavior (24), and was partially confirmed by the preliminary study conducted by Vaina et al (2014).
Results and discussions:
The application of the scales mentioned above reveals a significant positive correlation between mania (YRMS score) and total score of the questionnaire aggression (r = .428, p = .029) between mania and physical aggression factor (r = .593, p = .001) and between mania and anger factor (r = .418, p = .034). (table 1)
The results were similar to those in the preliminary study conducted by Vaina et al. (2014) in which was used the original test SAFFIMAP investigating the effect of subliminal images with aggressive content in patients with disorders from the psychotic spectrum (24).
The correlations obtained indicates that the presence of a manic symptomatology type with severe intensity is frequently associated with physically aggressive behavior, respectively with heightened anger. (Charts 2 and 3)
Our preliminary study shows a significant negative correlation between negative items of PANSS scale (PANSS-N) with the anger factor subscale of the aggression questionnaire (r = -0.440, p = .024).
The results are consistent with specialty literature, namely that the negative symptoms with a marked decrease emotional resonance capacity (PANSS- N) suggests a low level of anger. (Chart 1). Similar data were recorded in the study CATIE (Clinical Antipsychotic Trials of Intervention Effectiveness, 2003) that were evaluated over a period of six months, correlations between violent behavior, negative symptoms and positive symptoms using „The MacArthur Comunity Interview Violence „(25). Variables correlated with minor violence were younger age, female gender, low socioeconomic level, shared residence with family or another person, increased score on the positive symptoms PANSS subscale. Five items in the PANSS scale, subscale for positive symptoms have been associated with severe violence (hostility, suspiciousness, persecution, hallucinatory behavior, grandiosity, excitability). PANSS negative subscale was correlated with the reduction of severe violence (26).
In our research, the existence of multiple correlations between mania, aggression and negative symptoms required in order to increase data accuracy, application regression analysis multiline with independent variables (YMRS and PANSS-N) and dependent variables (subscales of the questionnaire aggressiveness).
Preliminary results obtained showed that anger and negative symptoms contribute in proportion of 27.1% in causing anger (F (2,23) = 5.64, p = .01) and in proportion of 39.4% in the occurrence of aggression physical (F (2,23) = 9.119, p = .01). (Table 2)
Our study didn’t show statistically significant correlations between aggression questionnaire score and HAM-D and HAM-A scale score. 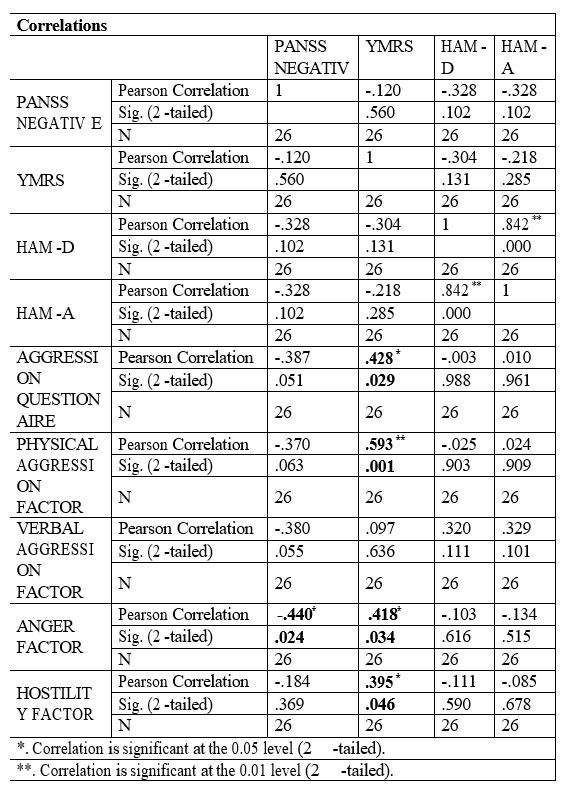 Table 1. Correlations between the study variables 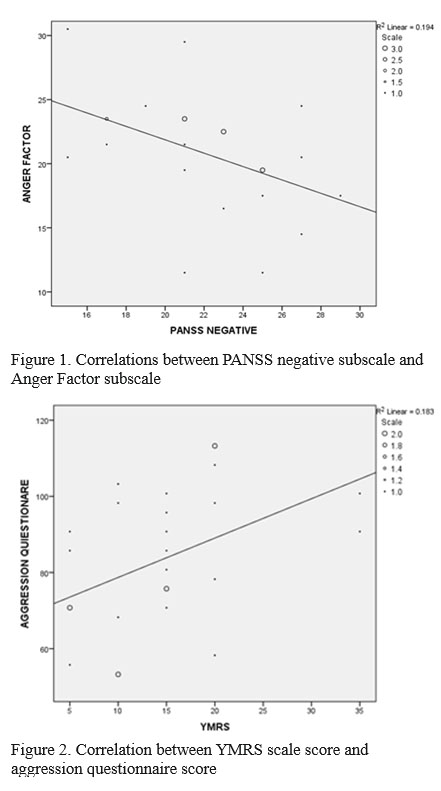 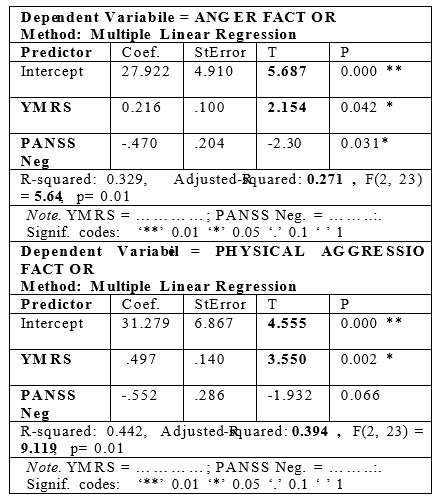 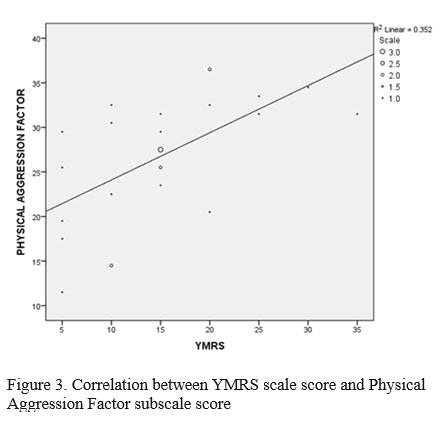 Conclusions:
Aggression, respectively anger factor are positively correlated with mania and negative correlated with affective flattening, apathy, so physical aggression may be predictable based on YMRS score or PANSS negative subscale score.
The small number of patients tested (26) is the limitation of this preliminary study and we consider for future research a greater number of subjects (60), also, we want to test them longitudinally, at admission and after periods of treatment (3 weeks, 6 weeks and 6 months, respectively) as well as comparative analysis with a group of normal subjects.

REMINDER: The authors have also contributed to create the article, having equal rights. All authors approved the final version of this article.
CONFLICTS OF INTEREST: The authors do not report any conflict of interest in the implementation of this article.
ABBREVIATIONS:
1. DSM-V-TR – Manual of Diagnostic and statistical classification of mental disorders
2. ICD-10- International Classification of diseases and health problems
3. PANSS- The positive and negative syndrome scale for schizophrenia
4. PANSS-N – PANSS negative subscale items
5. HAM-A -Hamilton anxiety rating scale
6. HAM-D- Hamilton Depression Rating Scale
7. YRMS- Young Mania Rating Scale