THE RELATIONSHIP BETWEEN DEPRESSION AND SOCIOECONOMIC FACTORS

INTRODUCTION
Major depressive disorder is a serious, chronic, common, recurrent disorder linked to a decline in social functioning and quality of life, also it is one of the principal causes of morbidity, disability and disease burden worldwide –(13). It is expected that depression will become the second cause of disability worldwide by 2020 and it is ranked by the World Health Organization as the fourth leading cause of disability across nations (4,5). The lifetime prevalence rate for major depressive disorder is 5% to 17%, indicating that there is a variability in prevalence estimates in different countries –(68). Almost all studies found that women have a twofold greater prevalence of major depressive disorder compared with men and that the highest onset rate of depression occurs between 20 and 50 years(6,9).
The socioeconomic factors can influence the prevalence of depression, but the studies results are controversial because they vary across countries, preponderantly between high income countries and low income countries (3,10,11). Socioeconomic status indicators, like employment status, education and income or wealth can affect health outcomes, also having an impact on major depressive disorder(12).
We hypothesis that there would be a statistically significant association between socioeconomic factors present at patients with depression and hospitalization outcomes (length of stay and number of previous admissions). We have formulated this hypothesis considering that the socioeconomic indicators can influence the severity of this disorder, which could be predicted also by the hospitalization outcomes.
METHODS
A non-randomized observational retrospective study was conducted by reviewing the observation sheets of 410 patients, with ages between 18 and 65 years, diagnosed with depressive episode or recurrent depressive disorder, according to the International Statistical Classification of Diseases and Related Health Problems 10th Revision (ICD-10) criteria, and treated in one of the departments of “Prof. Dr. Al. Obregia” Psychiatry Hospital of Bucharest, between June 1, 2016 and May 31, 2017. Cases of patients diagnosed with depression associated with other mental disorders, patients who had psychotherapy for depression, patients with important somatic comorbidities, drug abuse and pregnancy were excluded from the study. The study complied with the ethical norms regarding clinical research and it was approved by the Local Ethics Committee.
The collected data was introduced in a OpenOffice Calc version 4.1.1 Copyright © 2014 The Apache Software Foundation database. The statistical analysis was performed with the following programs: 1) R version 3.4.0 Copyright (C) 2017 The R Foundation for Statistical Computing Platform R Core Team, among the R standard packages, there were also used asbio and asympTest; 2) Python version 3.6.0 with scientific and graphic modules: scipy, numpy, statsmodels, statistics, matplotlib, seaborn, pandas in form of Anaconda (c) 2016 Continuum Analytics distribution.
For the categorical variables (gender, employment status, education) the relative frequency (the reported number to the total number) and the absolute frequency (number) were estimated. For the interval variables (age, length of stay, number of readmissions, monthly income) it was determined the central trend. Standard error mean (SEM) was calculated to determine (using the Student’s t distribution) a 95% confidence interval for the arithmetic mean (CI95%). Also, it was used the Shapiro-Wilk test for normality. The main endpoints of the study were the number of readmissions and the current length of hospitalization. To analyze the endpoints on different categories there was used ANOVA, post-hoc ANOVA (protected against inherent type I errors in multiple tests with the Bonferroni correction) and the Spearman correlation coefficient. P-values of 0.05 or less with a confidence interval (CI) of 95% were considered statistically significant.
RESULTS
The mean age of the pacients was 54.23 (SEM: ±0.36) [CI95%: 53.51 to 54.95] years, mentioning that the distribution had an important negative skewness (-1.89), and the female patients (n = 328, 80%) outnumbered the male patients (n = 82, 20%). Education level was analyzed for a number of 340 patients because of insufficient data and it was shown that 16.76% (n = 57) had no studies or graduated gymnasium, 41.76% (n = 142) had graduated vocational school or not graduated high school, 34.11% (n = 116) graduated high school and 7.35% (n = 25) had higher education. Employment status was analyzed for a number of 403 patients because of insufficient data and it was shown that 10.17% (n = 41) were unemployed,
79.99% (n = 322) were retired and 9.92% (n = 40) were employed. The mean value of the monthly income was
683.62 (SEM: ±18.17) [CI95%: 647.85 to 719.39] RON and the distribution had an important positive skewness (2.91). The number of readmissions had a mean value of 5.65 (SEM: ±0.26) [CI95%: 5.09 to 6.15] and the distribution had an important positive skewness (2.06). The mean value for the length of stay was 9.00 (SEM:
±0.21) [CI95%: 8.58 to 9.43] days and the distribution had an important positive skewness (2.46).
Patients with higher education had 3 more days of hospitalization than patients from other education categories, the difference having statistical meaning, as shown in tables 1, 2 and 3. There were no statistical significant differences between the educational categories in terms of the number of readmissions. 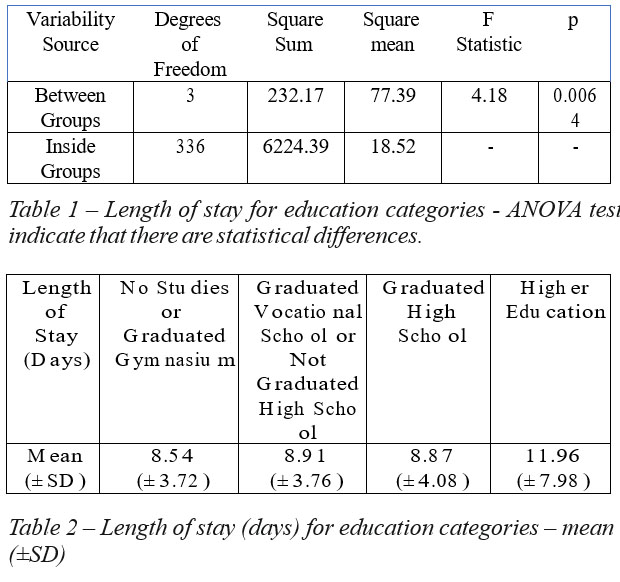 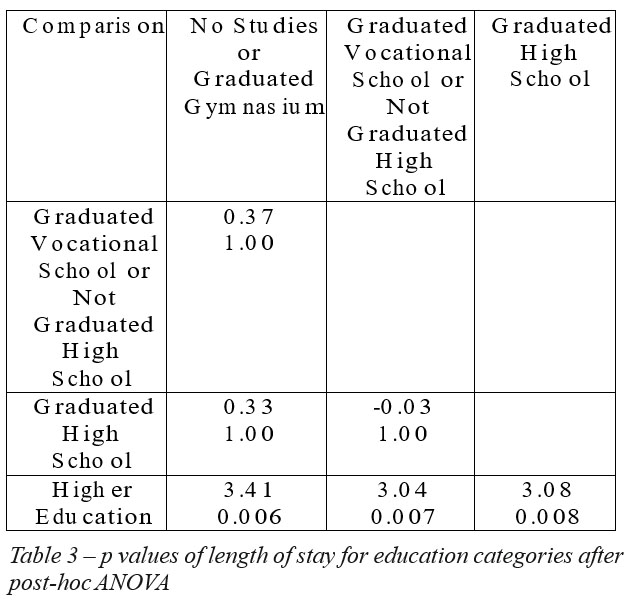 Patients who are retired have the shortest stay in the hospital, almost 2 days shorter than the unemployed patients (p < 0.05) and a bit over 3 days shorter than patient who are employed (p < 0.01), as shown in tables 4, 5 and 6. There were no statistical significant differences between the emloyment status categories in terms of the number of readmissions. 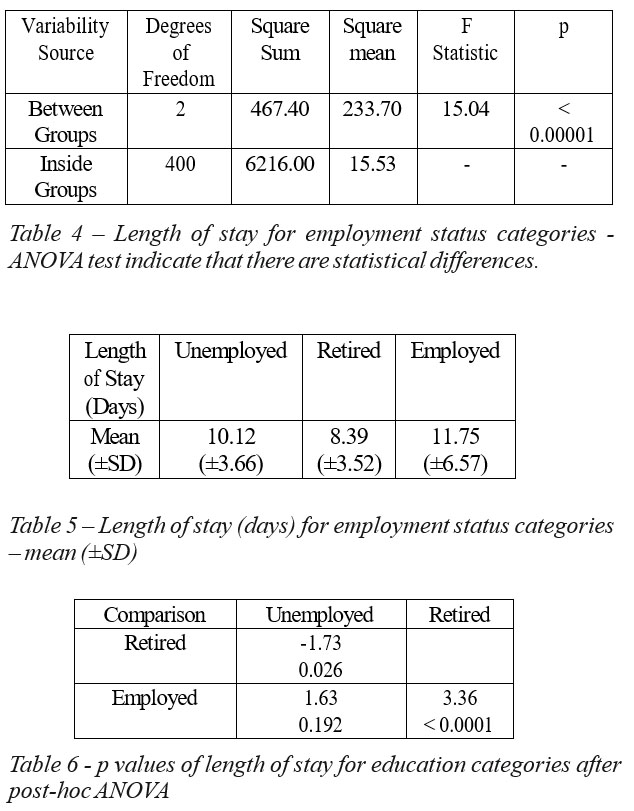 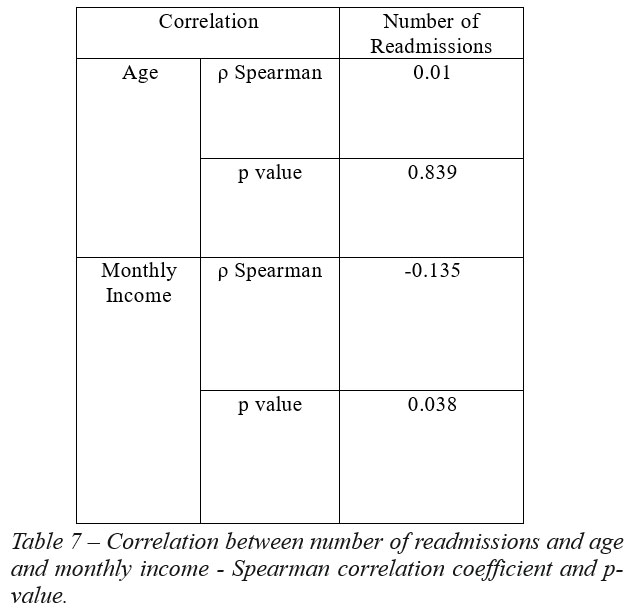 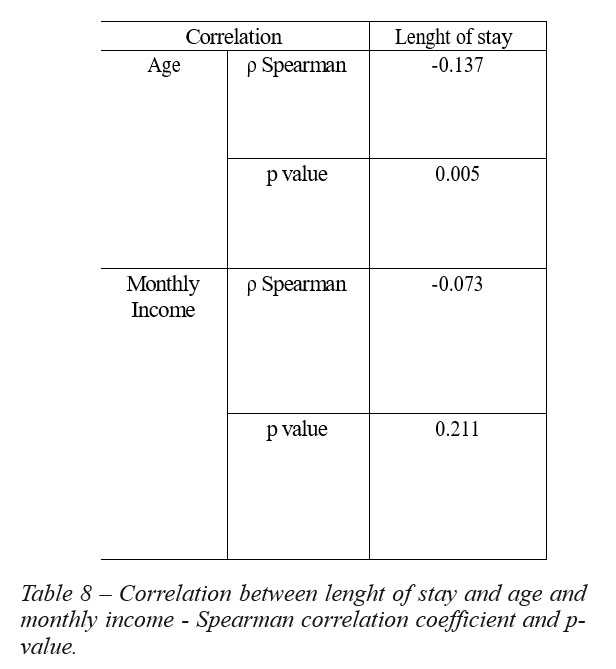 DISCUSSION
In this study we found that being slightly over 50 years old, being of female gender, with fewer years of education, less professional activity and with a low income are important factors associated with depression, suggesting that major depressive disorder is more common in socially disadvantaged people, results that are similar with otherresearch studies reported in the literature (10,13). Literature data regarding the relationship between depression and different socioeconomic indicators are still in debate, because the collected information from various countries is most likely influenced by the sociocultural setting –(10,1315).
Other studies point out that higher levels of education may prevent and may confer a better coping with depression, involving improved cognitive skills and behaviors regarding health-related issues (14,16). Also, employment status inserts individuals, on social positions that can be characterized by the power and prestige it has within society(17).
The study results suggest that the distress caused by the major depressive disorder and reflected in the elevated length of stay is increased for the patients with higher education.
Retirees had the shortest length of stay in comparison with the groups of unemployed and employed patients. It is recognized that economic difficulties and environmental features of work (e.g. social contact, social identity, skill use and development, regular activity, physical security) can influence the mental health of the individual (18,19), which can explain the increased length of stay for the unemployed and employed patients group.
Although there were weak correlations, our study found that lower income is associated with higher hospital readmission rates for depression and younger age is associated with an increase in length of stay. These results could suggest that the economic burden influences the evolution and prognosis of major depressive disorder and that the impairment caused by depression is higher in the early years.
These results suggest that the length of stay for major depressive disorder is influenced by socioeconomic and demographic characteristics and that the severity of depression could be predicted through hospitalization outcomes.
This study has several limitations, which need to be considered. One of them was the location of this study, the sample consisted of hospitalized patients who can differ from primary and secondary care. Another limitation that should be taken into account is that the nature of our data is cross-sectional. A further limitation was that we had no data on patients or family wealth, which is another socioeconomic indicator. If more larger scale studies are to be conducted in our country, there will be much more needed information on this disorder which continues to escalate in terms of prevalence.
CONCLUSIONS
Depression is a high prevalence and impairing disorder whose worldwide importance has been manifold demonstrated. This study results highlight the association between depression and low socioeconomic status present at patients admitted with this disorder. Education, income and employment status have an intricate relationship with depression and hospitalization outcomes. Future research might help us to better understand this multifaceted relationship and to improve prevention, therapeutic outcomes and quality of life.
ACKNOWLEDGEMENT
All the authors had an equal contribution and have similar rights. All the authors approved the final version of this article.
The authors report no conflict of interest for this article. LIST OF ABBREVIATIONS:
CI – confidence interval n – number of cases
SEM – standard error mean
SD – standard deviation