PREVENTION AND TREATMENT OF POSTOPERATIVE DELIRIUM IN THE ELDERLY, NON-CRITICALLY ILL PEOPLE: A LITERATURE REVIEW 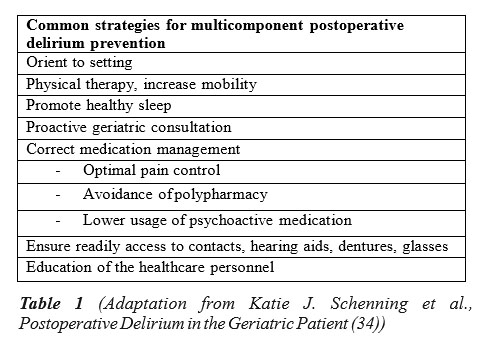 All in all, a recent Cochrane Review revealed that the incidence of delirium had a risk ratio of 0.69 (95% confidence interval, 0.59-0.81) when comparing multicomponent non-pharmacologic intervention to normal hospital care (38). To corroborate this, a systematic review on the effectiveness of multicomponent interventions on the incidence of delirium in hospitalized older patients with hip fracture found that the incidence of postoperative delirium was lower in the intervention group and also that the cognitive decline was higher in the control group compared to the intervention one (39). On the other hand, the same systematic review did not shed light on the duration or the severity of the delirium. In regards with duration, the studies are not completely relevant, 3 studies could not be pooled, 4 studies reported significantly lower delirium duration in the intervention group and 2 studies did not find it statistically significant.
Interestingly enough and warranting further research, this systematic review found only 3 studies on the functional and mobility status and only one of them found that a significantly higher number of participants were walking independently with walking aids on discharge in the intervention group compared to the control one. Another systematic review found that the HELP program is effective at reducing delirium incidence and rate of fall, with a trend towards reducing length of stay and preventing institutionalization (40).
A great deal of studies (41) (42) have come to the conclusion that many of the multicomponent non- pharmacological interventions do not require trained professionals to put them in practice, but rather similar results can be achieved with family members, caregivers or volunteers. One drawback is that these studies were focused on the medical wards patients, whereas there is currently a scant body of evidence on the surgical patients. One of the few randomized studies found evaluated the effects of involving family members in the management strategies for delirium in a post cardiac surgery setting (43). The study showed promising results, with the intervention group presenting better psycho-functional recovery scores when compared to the control. However, its limitations were important – low number of participants (14 in usual care group and 16 in the intervention one) and most of all, the intervention happened after the surgery so there was no pre-operative preventing component in it. We believe this specific topic needs further evidence-based attention in a multitude of surgical specialties and we think that the simple involvement of families or volunteers in preventing delirium (for eg. reorientation, restoration of sensory perception, oral hydration etc.) in a surgical setting could yield similar results to the medical one while also improving the cost-effectives of the whole process.
In addition to the multicomponent strategies presented above, numerous other non-pharmacological methods have been tested in trying to prevent postoperative delirium. Blood transfusions used to correct anemia have mixed evidence when it comes to postoperative delirium prevention (44) (45). Hypertonic saline solution, widely used in the resuscitation of the traumatic hemorrhagic shock, has been proven to have beneficial effects on the immune cell function and the subsequent inflammation. Thus, a novel approach uses hypertonic saline solutions to prevent delirium with promising results (46) (47) (48). On the other hand, preoperative exercise capacity is an independent factor in the development of postoperative delirium in elective cardiac surgery (49). It remains to be seen if physically preconditioning a patient at risk before an elective surgery can reduce the incidence of delirium. Bright light therapy and music therapy, although having strong recommendations against their use in an ICU setting, might prove effective in a surgical setting where the patients have a different biological profile (50). Further research should investigate the effect of multicomponent nonpharmacological interventions on the biological markers associated with delirium (IL1, Il6, TNFalpha, cortisol, CRP, etc.). Also, it is important to keep in mind that once postoperative delirium develops, the current evidence does not support the efficacy of multicomponent non-pharmacological interventions to treat it (51).
P H A R M A C O L O G I C A L P R E V E N T I O N A N D TREATMENT

ENDING NOTES
The topic of postoperative delirium is far from being over- researched. On the contrary, it can be stated that, in fact, too few people (medical staff, healthcare management and family members alike) know of this entity. A common, united effort of all medical and surgical specialists involved is needed to spread the knowledge on the topic and further the current research on all levels – basic sciences, translational and clinical.