INTRODUCTION
According to a systematic analysis of data and statistics from community studies in the European Union (EU) countries, 27% of the adult population (aged 18-65) was diagnosed with at least one mental disorder in one year. These figures represent an estimated of 83 million affected people in Europe. However, these figures are likely to underestimate the magnitude of the problem because no data was collected on people over 65 years old, a group with an increased vulnerability (1).
In 2016, 18.53% of adults in the United States of America reported having a mental illness, a slight increase over 2015 (18.19%). While this is only an increase of 0.4%, the estimated number of adults with a mental illness increased by 1.2 million people (2,3). In 2009, Florescu and colleagues conducted a study showing that the lifetime prevalence of any mental disorder in Romania was 13.4%, while 4.5% of respondents had two or more psychiatric disorders throughout their lives and 1.4% had three or more (4).
Therefore, the need to increase mental health services has led to the integration of technology with psychotherapy practice to increase its availability and has undoubtedly been one of the most widely discussed issues among mental health professionals over the past 25 years. Online psychotherapy, either through video conferencing or through structured online programs, has proven to be at least as effective as traditional psychotherapy (5).
Recent systematic reviews and meta-analyses have supported the idea that computerized and human assisted online interventions can be acceptable and effective for adult patients diagnosed with a mental health disorder such as anxiety and depression (6,7,8). The results for self-help programs may even be comparable to those of face-to-face treatments (9).
In line with these concerns, we intend to study the user’s response to an online structured cognitive behavioural psychotherapy program for a period of 18 months in a private psychotherapy practice. In addition to existing research, we intend to analyse the data in a non- randomized, observational study.
METHOD
In the usual every day practice, the sessions take place through four delivery methods: a) classical face-to- face sessions, b) videoconferencing through Skype, c) classical face-to-face sessions along with the online Think Healthy program, and d) sessions through Skype along with the Think Healthy online program.
Think Healthy
The Think Healthy Program is an online platform of psychotherapy and personal development. The format of this program is one lesson-session per day, including assessments, explanations, indications and interaction with a psychologist. The platform consists of a total of 93 lesson-sessions spread across 3 modules of 31 lessons with different strategies according to each user’s symptoms and periodic assessments (10).
The development of the program was carried out by a team of psychotherapists based on the principles of cognitive-behavioural therapy. The whole team has collaborated with programming and web design professionals. The program has been filed with OSIM and is a registered trademark.
In parallel with the lessons of the online program, there are also 50-minute classic sessions on Skype or face- to-face.
Participants
The studied group included all subjects who addressed our office between January 2015 and July 2016 and agreed to the use of personal data (with the exception of identification data) for the purposes of scientific research. Subjects were grouped according to their personal choice of treatment delivery method, without any external intervention to influence this. The sessions were h e l d w i t h p s y c h o t h e r a p i s t s a c c r e d i t e d b y t h e Psychologists’ College of Romania, according to legal ethical rules.
Each client was evaluated in accordance with the diagnostic criteria of the DSM IV – TR (Mental Disorder Diagnostic and Statistical Manual). For this evaluation, we used the structured clinical diagnostic interview, a semi-structured interview intended to determine whether a person meets the diagnostic criteria for any DSM disorder (SCID).
Number of subjects:
-646
-Women – 66.87%, Men – 33.12%
-Average age – 33.81
-Marital status: 46.59% – not married, 45.97% – married,
1.54% – widowed, 5.88% – divorced
-Level of education: Elementary studies – 2.78%, High school – 24.76%, Higher education – 72.44%
-Treatment: 24.30% with medical treatment and 75.69%
without medical treatment
Diagnosis: 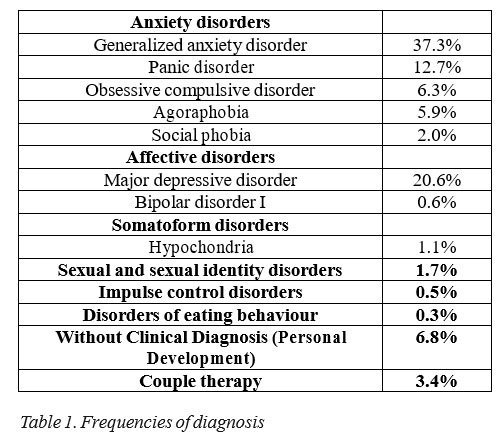 As part of current practice, we are constantly working with psychiatrists who recommend the treatment and follow the evolution of our clients. The evaluation, recommendations and decisions related to any changes and / or withdrawal of medication are entirely performed by the psychiatrist. In our comparisons we took into account that the recommended treatments are in accord with the standard medical protocols in Romania. The doctors with whom we collaborated are authorized by the Romanian College of Physicians.
Final evaluation
We examined the groups of subjects according to their diagnostic status at the end of the intervention. When psychotherapy was concluded, subjects who no longer met the diagnostic criteria were assessed as being “in remission”. Also, clients who experienced a reduction in their symptoms but still met DSM diagnostic criteria were assessed as “improved” and those who did not have any changes at the end of psychotherapy as “stationary”. Statistical methods
All the data was analysed using IBM SPSS Statistics with the Chi-squared test for categorical variables. For demographic variables (sex, marital status, education, etc.) we used relative frequencies. P values of 0.05 or less represented a statistically significant result.
RESULTS
We have made comparisons for the following groups of subjects:
·Face-to-face psychotherapy with and without Think
Healthy program.
·Psychotherapy through Skype with and without Think
Healthy program.
The analysis was also divided by medication (with and without medication) and depending on how the treatment was performed (face-to-face or Skype). Therefore, the statistical analysis was carried out on the following subcategories:
A.Comparison of subjects who had face-to-face sessions through Think Healthy (TH-C) with subjects who attended usual face-to-face sessions (C) and also received medical treatment.

After applying the Chi-square test, we obtained statistically significant differences (χ2=25,52; DF=2; p=0,00). We noticed that subjects who used the Think Healthy platform had a higher remission rate (34.8% vs. 17.4%). There also was a much higher percentage of stationary participants for the face-to-face sessions than TH-C. “Improved” group percentages are relatively equal (56.5% vs. 58%).
B.Comparison of subjects who had face-to-face meetings through Think Healthy program (TH-C) with subjects who attended usual face-to-face meetings (C) without medical treatment.

In this case, after applying the Chi square test, there were no statistically significant differences between the treatment groups. Because it is an observational study, we can make a comment on the favourable percentage of “in remission” clients who had received psychotherapy with the TH program (29.7% vs. 22.6%).
C.Comparison of subjects who had Skype meetings using TH (TH-S) with subjects who had usual Skype (S) sessions and received medical treatment.

We found significant differences between the two groups (χ2=7.84; DF=2; p=0.02) with a larger percentage of subjects in remission using TH-S. Percentages of stationary clients are relatively equal, and improved ones are higher in the usual Skype therapy group.
D.Comparison of subjects who had meetings through Skype using Think Healthy (TH -S) with subjects who had usual Skype (S) sessions without medication.

We had significant differences between the two groups (χ2=8.49; DF=2; p=0.01). We noted that TH-S had a larger proportion of subjects who achieved remission. DISCUSSIONS
Demographics of the group of subjects are consistent with the data identified in the literature. There was a higher percentage of female subjects, in accord with a study which states that women are more inclined than men to seek psychological help for their problems (11). Adults with the average age of 33.81 years have searched for help in a larger proportion, which is between the intervals of 20 to 49 years presented in this study (12). One possible explanation for this could be that younger persons observe a decline in their functioning faster than older people and, also, younger persons could easier seek information (for example through online scientific and media sources). Higher education has also been a major element in all four forms of delivery of psychotherapy. This is found in literature where, for each additional educational level, patients were 15% more likely to see a psychiatrist and 16% more likely to see a psychologist (13). The first three diagnoses identified were major depressive disorder, generalized anxiety disorder and panic disorder, which are similar to the prevalence reported by WHO (The World Health Organization) (14). Also, these mentioned disorders are among the ones with highest response rates to psychotherapy both short and long term.
The reviewed literature shows that computer- aided interventions with therapeutic support are as efficient as face-to-face meetings (15). Our data is in line with these findings, the results of the “in remission” group who performed psychotherapy via the TH platform were positively associated with better outcomes for both groups: with medication (for both comparisons) and those without medication (for TH-S comparison with Skype). These effects can be explained by several aspects:
1. The existence of an online, unitary place that is highly available to reach and easy to use constantly (16).
2. The content of the information, relevant to the user’s symptoms, the explanations presented both in video and in writing, the constantly received reminders, the revision of the platform and the specific exercises, which raise patient compliance. (17).
3. Recording of all the information experienced by the clients in chronological order as well as the entire process of their writing, giving the patient a positive feedback about symptoms’ evolution and outcomes on one side, while on the other side handing the therapist complete, organised data for interpretation (18).
4. Periodic evaluations of the changes in the user’s clinical symptoms and the fact that the clients can review their favourable evolution, thus enhancing compliance through positive association (19).
From the point of view of the improved and stationary clients, the results are different. For the face-to- face sessions, for non-medication treated subjects, the percentages are equal and the presence of TH did not significantly represent an influencing element for the psychotherapeutic approach. We need a future analysis that will allow us to identify the elements that influence these outcomes and make psychotherapy more effective. It is not the same thing for TH-S where the percentages of stationary clients are much lower in the presence of the platform. Symptoms were also reduced in the presence of
In the presence of medication, the percentages of conform DSM-IV, Management in Health, Vol 13, No 3 (2009) 5.Gerhard Andersson, Internet interventions: Past, present and future, Internet Interventions 12 (2018) 181–188 improved clients are relatively equal between TH-C and face-to-face sessions (C), but we can see that the percentages for stationary users are much lower for TH-C. Thus, the combination of TH treatment and face-to-face meetings lead to a greater improvement of the symptoms compared to just face-to-face sessions. The results for the TH-S comparison with Skype show that the percentages of stationary patients are relatively equal and the percentage of improved subjects is higher for Skype. In this case there are several things that can lead to these results such as: remission of symptoms in the presence of medication may lead to withdrawal from therapy before completion. Another aspect that may be involved in this decision is the financial status, given that all sessions’ costs are covered by each subject.
Our study has a number of limitations that we need to consider. Evaluations were not conducted with standardized tests, which prevent us from comparing some data with the available literature. It also prevents us from capturing symptom improvements of the studied subjects.
CONCLUSIONS
Our results raised both a number of issues and opportunities. Romanian born users are open to new models and forms of delivery of psychotherapeutic treatment, in addition to classical ones. Their efficiency has been proven by numerous studies and the analysis of the usual practice in our work shows that implementation can be done successfully. An important presence is noted in the usual practice of online delivery methods, as well as the fact that their effectiveness is comparable to classical methods, but with easier access and higher availability.
It is necessary to replicate the results obtained using standard evaluation tools in order to capture details of how each process influences patient outcomes.