CHARACTER TRAITS CORRELATED WITH SPIRITUALITY – A MULTIDIMENSIONAL STUDY OF PERSONALITY

Introduction: The growing interest in the study of spirituality and religion from a scientific point of view is supported by numerous arguments in favor of the existence of a positive correlation between religiousness and physical and mental health. Such an example would be the positive correlation between religiousness and longevity. It is indispensable to define the concept of “spirituality” and to demarcate it from other human dimensions so as to clarify the link between spirituality and physical and mental health. A way to approach this issue is by assessing personality dimensions. Objective: Assessing the correlations between the dimensions of spirituality and those of personality. Material and methods: The study was conducted on a cohort of 31 subjects, aged 18 to 26 years old, who were asked to fill out a form. The form consisted of three parts: General Information, the Spiritual Transcendence Scale – Short Form (STS-R) and the Temperament and Character Inventory (TCI). The STS-R form refers to a specific dimension: Spiritual Transcendence (ST). TCI is a form designed by Robert Cloninger and assesses seven basic dimensions of personality. The form includes four temperament scales and three character scales. Data collection: transversally, through sampling. Results: The study highlighted statistically significant correlations between the various dimensions of spirituality and between these and the dimension of cooperativeness. The study proved the intertwining between spirituality dimensions and personality dimensions. Conclusions: The profile of a “spiritual” person is set apart by high scores for the correlated dimensions. The temperament of a person does not impact on his spiritual development.

MATERIALAND METHOD
Cohort recruitment and description: The study was conducted on a cohort of 31 subjects, aged 18 to 26 years old, who were asked to fill out a form. The form consisted of three parts: General Information, the Spiritual Transcendence Scale – Short Form (STS-R) and the Temperament and Character Inventory (TCI). In an effort to cover a large range of scores corresponding to various spirituality dimensions, the form was handed out to students of the “Iuliu Haþieganu” University of Medicine and Pharmacy Cluj-Napoca and to members of the Romanian Orthodox Christian Students Association (ASCOR).
Exclusion criteria: age outside the 18-26 y.o. interval, leaving the age box unfilled, giving exaggerated/incomplete answers, answering “True” to Item 230 (TCI).
Out of the 31 subjects, 27 declared themselves Orthodox, 1 Catholic and the rest of them (3) nonreligious. The group was formed of 10 men and 21 women, most of them originating from an urban environment.
D a t a c o l l e c t i o n : t r a n s v e r s a l l y, t h r o u g h standardization.
Tools: The assessment of spirituality was carried out using the Spiritual Transcendence Scale – Short Form (STS-R), part of the Assessment of Spirituality and Religious Sentiments scale (ASPIRES) designed by Ralph L. Piedmont. STS-R evaluates Spiritual Transcendence (ST), which includes the following facets: Prayer Fulfillment (PF), Universality (UN) and Connectedness (CO). The STS-R form consists of nine statements which can be graded as follows: strongly agree, agree, neutral, disagree, strongly disagree. The subjects were presented with a table where they were asked to mark the qualifier chosen for each statement with an “X”. Each facet of the ST dimension is assessed using three statements (5). Filling out the table takes less than 5 minutes. The tables were translated into English by an authorized translator.
Personality was assessed using the Temperament and Character Inventory (TCI), which evaluates 7 personality dimensions – Temperament: Novelty Seeking (NS), Harm Avoidance (HA), Reward Dependence (RD), Persistence (P); Character: Self-Directedness (SD), Cooperativeness (C), Self-Transcendence (ST). The form can be filled out only by subjects over 15 years of age. The inventory consists of 240 statements; each of them can be rated “TRUE” or “FALSE” by the assessed subject. It takes approximately 40 minutes to fill out the TCI form (6). In order to compute the scores, the answers of each subject were typed in a Microsoft Excel file which contains the scoring key for the TCI form.
The Kendall rank correlation coefficient was used to define the relation between dimensions and was computed online. Kendall’s ô coefficient indicates the existence and intensity of a correlation between two compared series (7) and ranges from -1 to +1, contingent on the evolution of the values of the variables: it can be concordant (positive ô), discordant (negative ô) or independent (ô close to 0). Each score series obtained using STS-R (ST total, PF, UN and CO) was compared to each of the series corresponding to the personality dimensions assessed using TCI. The correlations were considered to be statistically significant if the two-sided p value was below 0.05.

RESULTS
The assessment of the link between Spiritual Transcendence and the basic dimensions of personality revealed the existence of statistically significant correlations (two-sided p < 0.05) between the scores obtained for the Spiritual Transcendence dimension (STS- R total) and the scores obtained for the Cooperativeness (C total) and Self-Transcendence (ST total) dimensions respectively. The “scatter” plots illustrating these correlations are available hereinafter (Figure 1 and Figure 2). 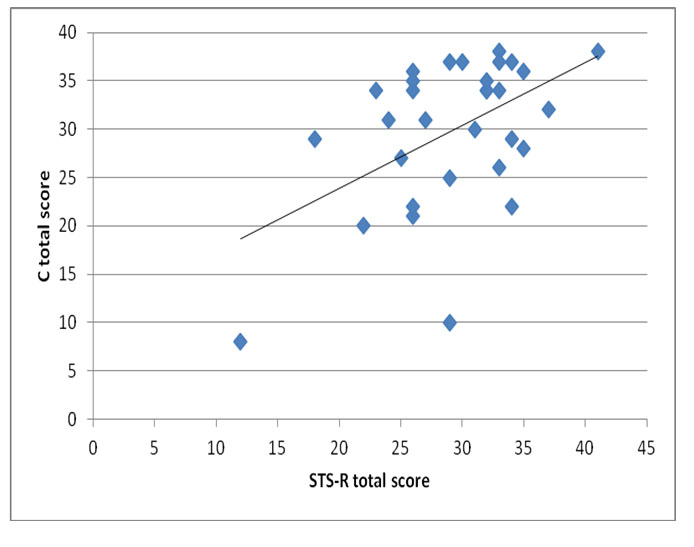 Figure 1. Scatter plot illustrating the relation between the
STS-R total score and the C total score 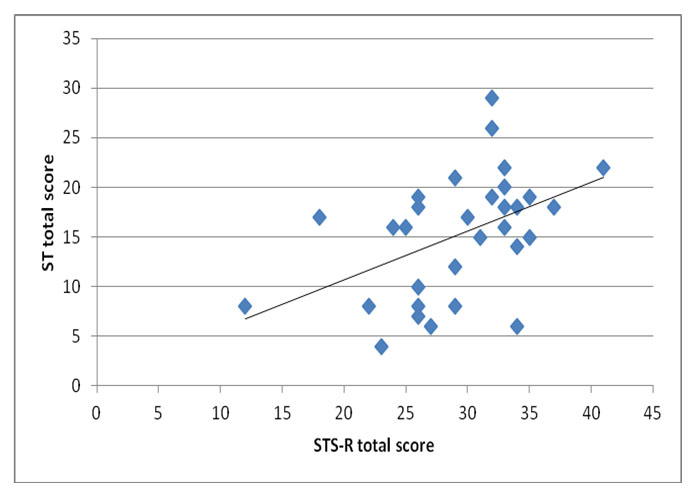 Figure 2. Scatter plot illustrating the relation between the
STS-R total score and the ST total score 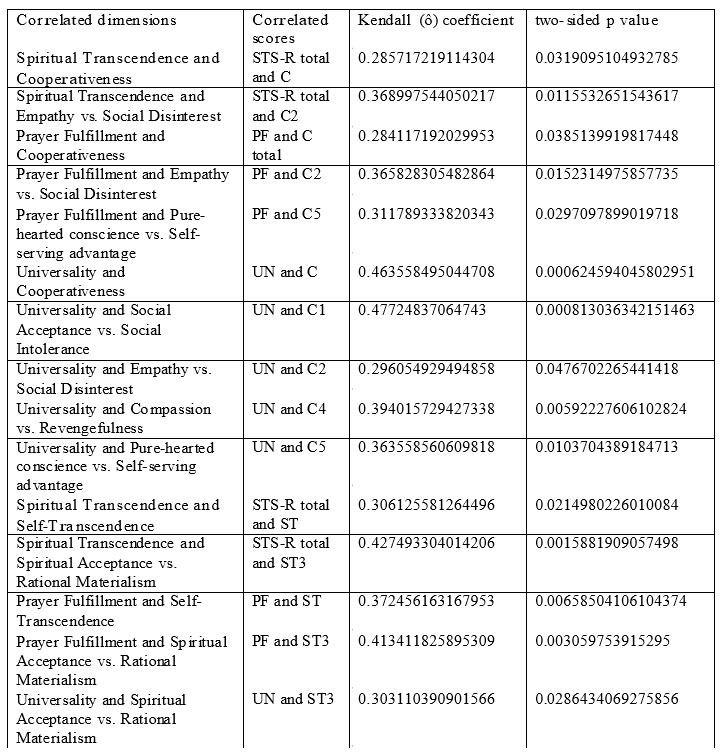 This study has revealed the existence of correlations between dimensions assessed for the cohort under study. High-ranking dimensions are correlated through some of their facets. All highlighted correlations are positive. The spirituality dimension taken into account in the study (Spiritual Transcendence) is correlated with Self-Transcendence and Cooperativeness.
For an intuitive understanding of the results, it is useful to explain them using their associated traits. If we refer to the correlations between the three dimensions, we can state that individuals who can be described as “unpretentious, satisfied, patient, creative, altruistic” (high ST score) usually believe in a plan and in a sense of things which goes beyond our mortal existence (high STS- R score). They are considered to be empathic, tolerant, fair, guided by principles and capable of compassion (high C score) (6, 8). Although not all facets are directly correlated, the numerous links identified help delineate a description which would correspond to a type of “spiritual” personality. The facets with multiple links firstly and those with a single link subsequently could be included in this description.
The correlation between the PF and ST3 facets shows that individuals who “find a source of emotional satisfaction, strength and support in their efforts to connect with a transcendental reality” and who “attach importance to meditation and prayer” (high PF score) often believe in spiritual phenomena such as miracles or extrasensory experiences and in the “sixth sense”, beliefs which become sources of relief in difficult times (high ST3 score). The correlation between ST3 facets and Universality entitles us to add that these persons believe that all beings are interconnected, vision which “gives rise to respect for other human beings and to the need to protect life in all its forms” (high UN score).
If we take into account this aspect and the positivity of all highlighted correlations, the opposite of the “spiritual” individual described above would be the “non-spiritual” individual, set apart by low scores for the facets assessed. Such individuals are rather focused on immediate needs and avoid activities such as meditating or praying (low PF score). They only “accept materialism and logical empiricism” and do not acknowledge things which cannot be scientifically explained (low ST3 score). Such individuals believe in the “every man for himself” principle and that “humanity is a collection of individuals” more or less akin to them (low UN score). They are perceived as insensitive, because they do not care about others’ feelings (low C2 score). They get revenge if somebody hurts them, openly or in a concealed way (low C4 score). They are opportunistic, treating others in a biased way in order to obtain benefits for themselves (low C5 score). We can also state that these persons do not feel emotionally attached to nature or other human beings and do not feel responsible for what happens in the world or for the faith of others (low ST2 score). They are intolerant and unfriendly. They lack patience and are critical, especially towards individuals who do not share their values (low C1 score) (6, 8, 10).