INTRODUCTION
Schizophrenia represents a very heterogeneous condition, genetic, clinical, natural course, prognosis, therapeutic response. Most probably this is related with the fact that schizophrenia might well represent a multitude of disorders (i.e. schizophrenias instead schizophrenia) and not a single disease (even though we can refute this explanation too). However, certain feature of this heterogeneity may be gender related. Gender differences have been studied widely in recent times and even if there are certain results, much ambiguity remains about the extent and degree of the putative differences. Traditionally, it was considered that the incidence and prevalence of schizophrenia was the same in both sexes (1), however, recent studies indicate that schizophrenia has a higher incidences in men (ratio 1.42) (2).
Regarding age of debut it is largely considered that men generally develop the illness at age 18–25, while in women, the mean age of onset is 25–35 (3, 4). Yet other studies (5) seem to indicate that there are none differences age of debut of schizophrenia regarding gender.
The study of gender differences and clinical symptoms of schizophrenia represent an extended explored topic, even though the results are far from conclusive.
Several studies have found gender differences in negative symptoms, showing that in males, they were more severe then disorganization symptoms (6, 7). Also it seems that female patients with schizophrenia have a higher prevalence of depressive symptoms and a lower prevalence of negative symptoms (8).
Nonetheless, most of the studies (9, 10) found no significant clinical differences in symptoms between sexes.
Results from the assessment of symptoms in first-episode psychosis are also inconclusive. In a group of patients with schizophrenia admitted for the first time (11), women presented more anxiety, illogical thinking, inappropriate affect, and bizarre behavior than men. In a different study women presented higher levels of affective symptoms than men. In another study (13) no gender differences were found.
OBJECTIVE
The purpose of my paper is to study putative differences between women and men at first episode of schizophrenia regarding socio demographic, clinic, functional and therapeutic response.

METHODS
Data analyzed in my paper are drawn from
European First Episode Schizophrenia Trial study.
The purpose of EUFEST study (18) was to compare the effectiveness of atypical antipsychotics (amisulpride 200–800 mg/d, olanzapine 5–20 mg/d, quetiapine 200–750 mg/d, ziprasidone 40–160 mg/d) with low doses of typical neuroleptics (haloperidol 1–4 mg/d). The measure for effectiveness in EUFEST is retention of patients on treatment, defined as the time to discontinuation of the study drug to which patients were originally randomized, within the study dose range, and without the addition of other antipsychotic drugs.
A total of 50 centers participated in 13 European countries and Israel. Eligible patients were 18– 40 years of age and m e t D S M – I V c r i t e r i a f o r s c h i z o p h r e n i a , schizophreniform, or schizoaffective disorder confirmed by the Mini International Neuropsychiatric Interview Plus. In this article I am using the word ‘schizophrenia’ as the term for schizophrenia, schizophreniform and schizoaffective disorder.
Patients were excluded if: (1) more than 2 years had passed since the onset of positive symptoms; (2) any antipsychotic had been used exceeding 2 weeks in the previous year or 6 weeks lifetime; (3) patients had a known intolerance to one of the study drugs; and (4) patients met any of the contraindications for any of the study drugs as mentioned in the (local) package insert texts.
The investigators informed eligible patients orally and in writing on the trial and invited them to participate. Baseline data were obtained between 4 weeks before and 1 week after randomization on demographics, diagnoses, current treatment setting, psychopathology (Positive and Negative Syndrome Scale PANSS) severity of illness (clinical global impression; CGI) overall psychosocial functioning (global assessment of functioning scale; GAF) extrapyramidal symptoms (St Hans rating scale; SHRS), depression (Calgary Depression Schizophrenia Scale), and neurocognitive performance from various cognitive domains: 1) tests of complex visual scanning, motor speed, and ability to shift strategy- Trail Making A [time], Flexibility Index [Trail Making B–A time]-2) symbolic representational abilities, visual motor skill/dexterity, processing speed, attention/concentration, visual perception of abstract stimuli, and short-term visual memory- Wechsler Adult Intelligence Scale Digit-symbol Coding [total correct], 3) motor speed and motor coordination and is sensitive to subtle motor dysfunction, including extrapyramidal symptoms- Purdue pegboard [total pegs with dominant hand], 4) learning index – Rey Auditory Verbal Learning Test [total correct on trials I–V], and Rey Auditory Verbal Learning Test – secondary memory [total correct on Delayed Recall trial] , Quality of Life – Manchester Short Assessment of Quality of Life (MANSA).
After complete description of the study to the subjects, written informed consent was obtained. The trial complied with the Declaration of Helsinki and was approved by the ethics committees of the participating centers.
Assessments were targeted at baseline, 1, 3, 6, 9, and 12 months.
Data analyzed in my paper refer to Romanians patients (N=112, 61 (54%) women and 51 (46%) men) included in this study.
I compared firstly the putative differences between sexes regarding socio demographic and clinical data before starting the treatment, and secondly I analyzed clinical response in both groups.

STATISTICALANALYSES
Data were analyzed by using independent samples t test for continuous independent values and chi square and logistic regression for categorical independent values. The dependent variables is gender. Concerning cognitive functioning for simplicity I created a composite score of cognitive functioning, after standardizing to create z scores and obtaining the mean for standardized values on the neurocognitive tests. Data about duration in treatment were analyzed using Cox-regression function. All analyses were performed with SPSS 16.

Socio demographic data about gender differences are presented in table 1.

There are no differences considering age and being married between sexes at first episode of psychosis. Yet the males are statistically significant less educated and more frequently without any occupation.
Data about clinical status of the two sexes before starting medication are presented in table 2. 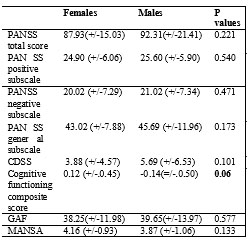 Table 2. Clinical status of the two sexes before starting medication 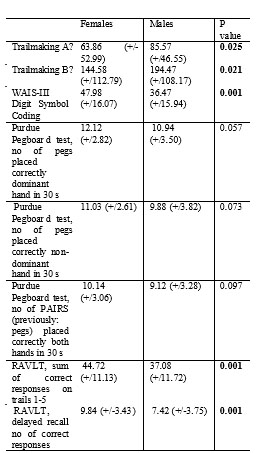 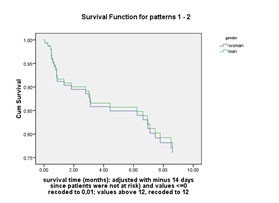 Data about clinical response by sex are presented in table
4. Results are controlled for treatment arm.

Data for specific cognitive functions in both sexes after 6 months of treatment are presented in table 5. 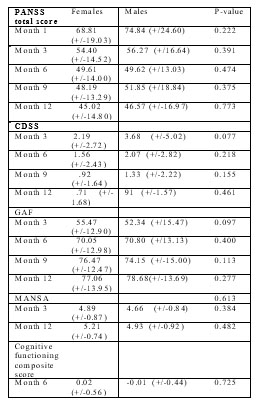 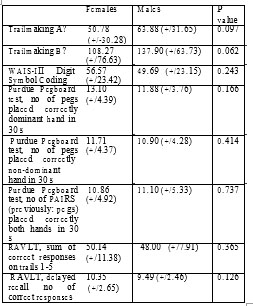 DISCUSSION
There are no differences considering age and being married between sexes at first episode of psychosis. Males are statistically significant less educated and more frequently without any occupation than females.
The results from my study suggest that there are none differences between sexes at first episode schizophrenia regarding severity of psychosis, negative symptoms, depression, functionality and quality of life. The sole difference is in the domain of cognitive functioning, males performing overall almost significantly worse than females.
The domains were males schizophrenic patients performed poorer than females are: 1) complex visual scanning, motor speed, and ability to shift strategy- Trail Making A and Trail Making B ,2) learning tasks – Rey Auditory Verbal Learning Test and 3) symbolic representational abilities, visual motor skill/dexterity, processing speed, attention/concentration, visual perception of abstract stimuli, and short-term visual memory- Wechsler Adult Intelligence Scale Digit-symbol Coding without differences in motor speed and motor coordination – Purdue pegboard.
The above results do seem to indicate that there are quite few differences between sexes at first episode schizophrenic patients and basically schizophrenia manifest rather similar in women and men at least at onset. The sole significant results are in domain of education and having an occupation (males being less educated and more often without an occupation than females schizophrenic patients) and in certain cognitive domains. It is tempting to speculate that the poorer cognitive functioning of schizophrenic males at first episode is responsible for the reduced level of education of males and for the males having less an occupation.
Regarding treatment there were none differences between survivals in treatment between sexes.
First episode females and males respond equally to the treatment without any differences between sexes for the duration of entire study (1 year) and without differences on any visit (one month, three months, six months, nine months and twelve months) on the next domains: psychopathology, depression, overall psychosocial functioning and quality of life.
More interesting, there are no differences between cognitive functioning between sexes at the last evaluation of cognitive functioning (6 months). This apply on composite cognitive score but also on all cognitive domain evaluated by this study. It may be a practice effect (with a ceiling effect for women at a certain level of improvement) or it may also be that improving psychopathology also improves cognition irrespective of lack of differences in initial level of psychopathology between sexes. Thus, males cognition improvement is due to the improvement of cognition related to improvement of psychopathology (speculatively cognitive impairments secondary of psychopathology being more important in males than in females).
First episode schizophrenia manifests almost the same in both sexes. Also gender doesn’t seem to represent a predictor of therapeutic response, functionality and quality of life, at least at 1 year of illness evolution. Yet schizophrenic male patients at first episode seem to be less educated and without an occupation.