116 inpatients, admitted in the Timișoara Psychiatric Clinic between January 2010 and February 2012 with severe depression were enrolled in this study. Of these, 51 patients met the ICD-10 diagnostic criteria for BD and 65 for RDD (12). Other inclusion criteria were: age 18 to 60 years, HAM-D 17 score ≥ 18. Cases with current comorbid psychiatric disorders, severe somatic or neurological illness which would interfere with the assessments, abuse or addiction to psychoactive substances were excluded from this study. All patients signed informed consent forms before enrollment. The study was approved by the local ethics commitee.

All cases included in the study were assessed the first week following admittance. We used the romanian v e r s i o n   ( 5 . 0 . 0 )   o f   t h e   M I N I   ( I n t e r n a t i o n a l Neuropsychiatric Interview) as the structured clinical interview (13). Socio-demographical data and some variables (age at onset, number of episodes, disorder duration, mean depressive episode duration, family history of psychiatric disorders, history of psychotic symptoms during the depressive episode and suicide attempts) were obtained by direct interview, patient files and the attending psychiatrist. Data regarding atypical vegetative symptoms (hypersomnia, increased appetite, weight gain) referring to the current and previous episodes, was collected by using a questionnaire designed by the author. Depression severity and symptomatic profile were assessed by using the Hamilton Depression Rating Scale (HAM-D 17) (14) and the Montgomery- Asberg Depression Rating Scale (MADRS) (15). Both rating scales were used to better rate and analyze a broader spectrum of depressive symptoms. Treatment influence upon the depressive symptoms was not a study objective at this stage.

Because of the sample size and the fact that the cases come from a clinical population, we used the Liliefors normality test, which showed a non-gaussian data distribution. Accordingly, we applied non-parametric statistical tests, with results being considered significant if p≤ 0.05. We used the following statistical tests: non-parametric tests for differentiating means and ranks, the Mann-Whitney-U test, One Way ANOVA and ANOVA factor tests, the χ2 test for differentiating frequencies and the Spearman R non-parametric correlation test.

The percentage of females in the BD group and the RDD group was 64.61 % and 62.75 % respectively, mean age upon study entry was 43.45 years (SD 9.08) in the BD group and 48.60 years (SD 7.37) in the RDD group. There were no significant statistical differences regarding sex distribution and mean age between the two patient groups.
To identify the differences between the two groups regarding general clinical characteristics we used the Mann-Whitney-U test. The results can be found in Table 1. 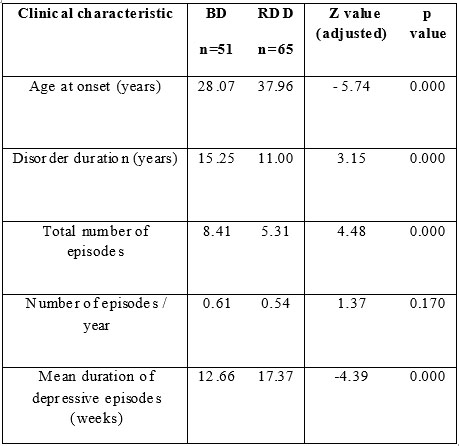 As predicted, mean age at onset was lower in the BD group than in the RDD group (28.07 versus 37.96 years). Because of the difference between the two groups regarding disorder duration, we cannot consider the difference regarding the item total number of episodes as significant. Mean depressive episode duration was significantly lower in the bipolar group. The reported family history of psychiatric disorders was significantly higher in the BD Group (39.21 % versus 16.90 %, χ2 = 7.252, p=0.007).
The symptom profile of the depressive episode (Table 2) was obtained by using the MINI, HAM-D 17 and MADRS scales. For atypical vegetative symptoms, psychotic symptoms during the episode and suicide attempts the assessment focused on the current and previous depressive episodes. Because in this stage of the study we only noted the presence or absence of these symptoms, we applied the χ2 test to compare the two patient groups. 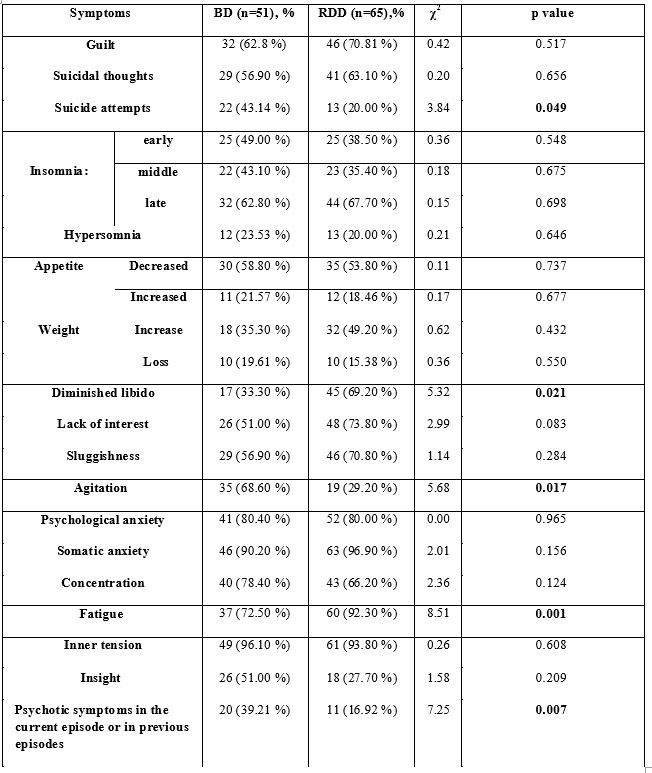 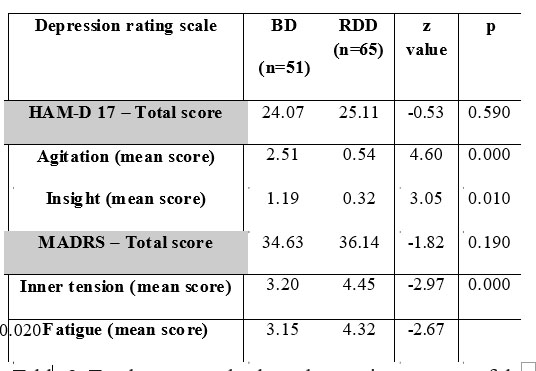 We found no significant differences when comparing the total scores of the two patient groups. The Mann-Whitney-U test shows a significantly higher score in the items agitation and insight in the bipolar group. The high score of the item agitation on the HAM-D 17 scale (score 2.51) may have a predictive value for bipolarity according to the One Way ANOVA analysis (p=0.000). The item insight from the HAM-D 17 Scale (score 1.19) may also have a predictive value for bipolarity, although the statistical significance after applying the One Way ANOVA test was slightly lower than for the aforementioned item. There are no specific correlations between the two items (R=0.129) which means that simultaneous high scores in both items may represent an indicator for bipolarity as the factorial ANOVA analysis results showed (item agitation F=3.80, p=0.012; item insight F=3.78, p=0.026; the resulting factor from the simultaneous presence of both items F=400.91, p=0.000). Patients with RDD showed higher scores in the MADRS scale regarding inner tension and fatigue. We applied the Spearman R test which showed correlations between several items of the MADRS Scale, as follows: inner tension and reported sadness item (R=0.258; reported sadness and fatigue, R=0.470; inner tension and fatigue R=0.207; fatigue and guilt R=0.199). For inner tension and fatigue we applied the ANOVA test to see if increased scores may be considered as predictors for any of the two affective disorders. Because we found strong correlations between the two items, we cannot state that the simultaneous presence of high scores in these items is necessary or sufficient to differentiate the two types of depression.

DISCUSSIONS
A tardy recognition or misdiagnosis of bipolar affective disorder and implicitly administering inadequate treatment may have negative consequences on disorder outcome and thus being able to differentiate the two disorders in the first phase has a special clinical importance. In this comparative analysis we found numerous similarities between unipolar and bipolar depression but we also identified some differences that might have a predictive value for one or the other affective disorder.
Clinical and epidemiological studies (16-19) suggest that mean age at onset is by 6 to 8 years lower in bipolar patients than in recurrent depressive patients, a difference which we also found in our study. A relatively recent study performed by Benazzi and Akiskal (20) mentions that early onset (occuring at 25 years of age or earlier), accompanied by a high episode recurrence are possible indicators for bipolar disorder. Another indicator of bipolarity mentioned by the authors is a positive family history for bipolar affective disorder. Familial studies and genetic epidemiological studies (21-23) showed a significantly higher rate of psychiatric disorders (especially affective disorders) in relatives of patients with bipolar disorder, which, as expected, we also found in our study
Regarding duration of the depressive episode, the results of our study show a shorter episode duration in BD than in RDD, which are consistent with previous studies (24-26).
In the literature there are several controversies regarding suicidality in the two affective disorders. Some authors report a higher rate of suicidal behavior and suicidal thoughts in subjects with BD type I (27, 28) and BD type II (5, 19, 29) than RDD subjects, while others found no differences (30, 31).
In the present study, a significantly higher number of bipolar patients had a history of suicide attempts when compared to recurrent depressive patients, but we found no differences between the two patient groups regarding suicidal thoughts (56.90 % in the BD group versus 63.10 % in the RDD group). The high percentage of suicidal thoughts in both patient groups, although not statistically significant, should urge further research because of its importance as a public health issue. In contradiction with other studies (11) we did not find significant differences regarding somatic symptoms of depression with the exception of libido, which is diminished in a high percentage of recurrent depressive patients. The predictive value for bipolarity of atypical symptoms has remained an ongoing subject of debate in the literature. Some studies reported a higher rate of atypical depressive symptoms in BD I patients (8, 26, 27,32) and BD II (33) than RDD patients, while other studies (25, 34), including ours, did not find differences between patients with BD and RDD. The contradictory results may be explained by the differences in methodology, sample size, but also by the possible existence of a continuous distribution of atypical depressive symptoms between BD and RDD (7).
In this study we also analyzed mean per item scores of the HAM-D and MADRS scales and found differences between the two patient groups. In the bipolar group, scores for agitation and insight were significantly higher than in the recurrent depressive group. In the RDD group, scores for inner tension and fatigue were significantly higher than in the BD group. ANOVA factorial analysis suggested that only the simultaneous presence of high scores in the items agitation and insight may be a possible indicator of bipolarity.
The limits of the study are the relatively small number of cases, the fact that the assessments did not include information about therapeutic regimen nor about the comorbid long-life states, aspects which can influence the symptomatic profile. Some assessments were retrospective and data collection was carried out without using standardized instruments. Other assessments were carried out only for the current episode. Because of the variability of depressive symptoms, ampler studies and long-term prospective assessments are to be desired.

The obtained results, with all the mentioned study limitations in mind, can be added to existent studies regarding the phenomenology of bipolar and unipolar depression. We found several similarities in the symptomatic profile and clinical data of the two depressive types, but also some different individual characteristics, such as: early onset, family history of psychiatric disorders, agitation, suicidal behavior and psychotic symptoms (more frequent in BD patients) and longer episode duration, fatigue and diminished libido (more frequent in RDD patients). Although individual depressive symptoms (regardless of frequency and severity) cannot be considered differential criteria between the two types of affective disorder, we can build models with predictive value on their basis. The practical importance of this type of studies consists of encouraging clinicians in discovering individual characteristics of the depressive episode which may guide the diagnosis in the first phases of the disorder and thus ensure proper treatment.