PROTECTIVE FACTORS AGAINST SUICIDE IN PERSONS TRAUMATIZED BY ACCIDENTS

Assessment of suicidal ideation and behavior in persons exposed to various types of accidents is challenged by: priority of appropriate emergency medical care before any assessment of psychological needs or crisis intervention measure, heterogeneity of individual psychological response to similar types of accidents, numbers of persons affected, difficulty in following up subjects impacted by trauma (1). Insufficiently identified needs of persons traumatized by certain accidents, among which dealing with various degrees of suicidality, add to the burden of disability, negatively impact on intervention cost – effectiveness and generate mortality through suicide following trauma (2). This underlines the importance of accurate identification of subjects more prone to developing suicidality in the wake of specific types of accidents (3).
Assessment of suicidality does not generate suicidal ideation or behaviors (4); moreover, the appropriate assessment tools can identify persons and contexts in which management of suicidality needs to become a priority of posttraumatic intervention. Also, some these instruments can evaluate individual resources and vulnerabilities, which in turn can reflect in comprehensive interventions tailored to specific needs (5).
An observation derived from empirical data and supported by all current studies is that most subjects experiencing severe trauma will not actually develop suicidal ideation or behaviors (6), in spite of similarities between posttraumatic patterns of reaction (emotional constriction or numbing, perceived lack of resources, narrowed outlook about the future) (7) and common emotional and cognitive patterns associated with suicidality (hopelessness, helplessness, no escape) (8). Nevertheless, attempted and completed suicide are highly severe and entirely preventable complications in the process of psychological adjustment to traumatic events, which add to the individual and social cost of any type of trauma (9).

AIM OF THE STUDY
To assess suicidality and reasons to stay alive after trauma within a specific type of Romanian trauma population, consisting of individuals impacted by motor vehicle accidents, work – related accidents or burns, which facilitates assessment of resources and vulnerabilities related to suicidality after such traumatic events and development of effective, flexible interventions.

PARTICIPANTS AND METHOD
45 subjects treated in the Clinical Rehabilitation Hospital Cluj-Napoca – Neurology Rehabilitation Clinic (22 subjects – 48.9%) and Plastic surgery and reconstructive microsurgery Clinic (23 subjects – 51.1%) were included in the study. The following inclusion criteria were employed:
– Informed consent of the subject, approved by the Ethics Committee of the University of Medicine and Pharmacy “Iuliu Hațieganu” Cluj-Napoca – according to the World Medical Association Declaration of Helsinki
– Exposure to trauma consisting of motor vehicle accidents, work-related accidents or burns
– The event in question endangered the subject’s life / physical integrity and/or was perceived as such by the person in the peri-traumatic context, generating a response of horror, helplessness, intense fear Data related to subjects’ gender, age, marital status, residence, date and type of trauma were assessed in the included subjects (see Table 1).

Data presented as mean (standard deviation)
Table 1. Demographic and clinical features of the studied group
The following clinical instruments were used for this study:

1.PAYKEL SUICIDE SCALE (PSS)
Paykel Suicide Scale is a 5-item versatile assessment tool, clinician-administered or self-rated, easy to employ and useful in emergency and trauma settings or clinical contexts requiring complex medical and surgical interventions (see Table 2). Incrementally increasing degrees of suicidal thought, planning and action are scored from 0 (not at all) to 5 (always) and suicide potential can thus be assessed within various timeframes and populations (10). 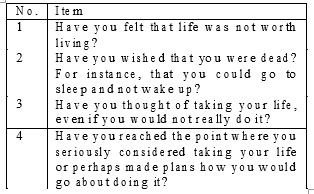 The version translated and adapted into Romanian was used for different timeframes of assessment of suicidal thoughts, plans and behaviors – the past 2 weeks, the interval between the traumatic event and the moment of assessment and lifetime.

Linehan Reasons for Living Scale (RFL), developed in 1983, is a self-report with 48 items grouped in 6 subscales – Survival and Coping Beliefs (items 2, 3, 4,
8, 10, 12, 13, 14, 17, 19, 20, 22, 24, 25, 29, 32, 35, 36, 37,39, 40, 42, 44, 45), Responsibility to Family (items 1, 7, 9,16, 30, 47, 48), Child-related Concerns (items 11, 21, 28), Fear of Suicide (items 6, 15, 18, 26, 33, 38, 46), Fear of Social Disapproval (items 31, 41, 43), Moral Objections (items 5, 23, 27, 34). The importance of each item as a reason to stay alive is rated on a Likert scale from 1 (not at all important) to 6 (very important). This complex tool evaluates individual cognitions, beliefs and values, it is focused on the assessment of individual adjustment patterns and provides information which can further be used in developing effective, flexible and individualized prevention strategies. Both total scores, and scores for each subscale can be considered. Lack of strong reasons to live is regarded as a warning for potential future suicidal gestures (11, 12).
The 48-item version provided by the author for research purposes, translated and adapted into Romanian was used for this study. Although the scale was initially developed for suicidal subjects, the original instructions provide the possibility to employ this tool on various types of populations, exploring the reasons why the individual would not consider commiting suicide if someone else mentioned suicide as an option.
Statistical analysis was performed using Statistical Pack for Social Sciences (SPSS), Version 16.0. Mann – Whitney U test was used to assess differences in the distribution of discrete variables between two independent samples.

Table 3. Distribution of suicidality levels of intensity in the studied group in the interval between index trauma and assessment

Table 4. Distribution of suicidality levels of intensity in the studied group in the 2 weeks before assessment

Table 5. Two-tailed p for items of the Survival Coping Beliefs subscale in which statistically significant differences were obtained in the studied samples

DISCUSSIONS
Ensuring emergency medical care and a comprehensive intervention that would prevent fatal outcomes, minimize disability and optimize interpersonal functioning is crucial after motor vehicle accidents, work- related accidents or burns (13). Nevertheless, psychological impact of such trauma is still insufficiently explored, despite both increasing awareness among medical staff in units treating exposed patients, and the positive impact of psychological intervention (when required) on overall recovery and cost-effectiveness (14).
Some authors have suggested that an illness- oriented approach to trauma in primary care may hinder posttraumatic growth and effective identification and use of resilience resources (15). Also, it has been noted that severe, pervasive disruption of posttraumatic functioning and suicide risk may be generated by symptoms that do not reach the severity of a psychiatric diagnosis (16). Nevertheless, a medical – oriented, biopsychosocial model of trauma facilitates understanding of underlying psychopathological mechanisms and intervention needs, while providing/enhancing the service network for the most appropriate assessment, referral and follow-up (17).
If suicidality in the wake of accidents is conceptualized in relationship with a specific diagnostic entity, assessment of protective factors against suicide may fall short due to a number of confounding factors, among which: diagnostic issues of posttraumatic stress d i s o r d e r a n d i t s c o – m o r b i d c o n d i t i o n s ( 1 8 ) , methodological difficulties in extrapolating the results of current studies to different populations or index events (19). Our study took these issues into account and employed a validated assessment tool based on cognitions and attitudes promoting survival and preventing suicide in all included subjects, irrespective of degree of posttraumatic symptoms ascertained.
This study is a new approach in Romanian trauma research, and the first study in Romania or elsewhere to use RFL in a specific trauma sample. The assessment of suicidality in persons traumatized by accidents, provided by the current study, confirms that active suicidal thought, planning and behaviors are rare after trauma, while adding to the still scarce and insufficient body of international data (20, 21). Thus, the current research indicates beliefs and attitudes that foster life, protect against suicide and can contribute to the improvement of trauma management strategies.By further adding a comparative sample of subjects not exposed to the types of events in question, protective and risk factors with a higher degree of specificity for these events may be ascertained. Nevertheless, the current study emphasizes the importance of self – efficacy in using internal and external resources and a pro-active outlook on life with the consequences of trauma, in order to protect against suicide in the wake of accidents such as those assessed. Data derived from this study stress that these issues are also protective factors against acute suicidality in the context of such accidents and need to be addressed in crisis interventions.
The key findings of this study prompt to specific factors related to short- and long-term intensity of active suicidal ideation and planning, which is regarded as a strong predictor of suicidal behavior in the wake of accidents (22). These factors – beliefs, attitudes, values – can be incorporated in flexible strategies that assess and address unmet posttraumatic psychological needs, target intervention to those who need it most and improve outcome.

1.Perceived self – efficacy and flexible, positive outlook in the wake of trauma, reflected in love and respect for life and for oneself, planning for the future, perceived courage and solutions to problems and pain, perceived satisfaction with life as it is, are identified by included subjects as protectors against suicide after the referrence accidents, both on a long-term basis, and on a shorter timeframe (the two weeks preceding assessment). The strongest protectors appear to be caring for oneself, perceived purpose, love and beauty of life, perceived alternative solutions to suicide.
2.Two types of family – related factors emerge in the studied sample as protective against acute active suicidal ideation and planning after the types of accidents assessed: the perception as having a responsibility towards the family and being needed by the family.
3.The perception of suicide as morally wrong can be used as protector against posttraumatic active suicidal ideation and planning only in longer term assessment and intervention strategies.
4.Perceived desire and curiosity to live, positive outlook on life as a whole, perceived stability and ability to cope with trauma emerged as reasons to stay alive after trauma in the studied sample on a longer term, but not in the two weeks prior to assessment. Therefore, these aspects may need to be included in short-term intervention and probably stem from posttraumatic growth.

ETHICAL CONSIDERATIONS
An informed consent, approved by the Ethics Committee of the University of Medicine and Pharmacy “Iuliu Hațieganu” Cluj-Napoca, was signed by every participating subject – according to the World Medical Association Declaration of Helsinki.

CONFLICTS OF INTERESTS.
The authors do not have any conflicts of interests to report.

FUNDING SUPPORT AND ROLE OF THE FUNDING SOURCE.
The article is a part of a PhD research co-funded by the Social European Fund through the Operational Structural Programme for the Development of Human Resources (POSDRU) 2007 – 2013 „Invest in people! Doctoral Studies: through science to society”, Contract Code 6/1.5/S/3, University Babeş – Bolyai, Cluj-Napoca, Romania