Breast cancer is the most frequently encountered form ofmalignancy in women and it represents around 28% of the reported cancers in Europe (). It is estimated that more than 1,6 millions of new cases of breast cancer were diagnosed in the world in 2010, the highest incidences being foun in Western Europe () (89,7/100.000), Australia, Northern europe and north America (). Breast cancer usually generates bone metastasis, but also liver, lung and regional lymph ganglia are involved, distance spread being responsable for 90% of the deaths generated by this type of malignancy (). It stands for the fifth mortality cause by cancer in women in both developed and developping countries ().In Romania more than 6000 new cases are reported each year, usually in an advanced stage, with an incidence of 56,84/100000 and a mortality of 39,28/100000. A recent International Agency for Cancer review notices a 17% increase of breast cancer mortality in Romania the last few years (), and 3225 patients deceased in our contry in 2011 because of this terrible ilness ().
The reported percent of the depressive spectrum disorders in the literature varies between 1.5 and 45% (). In a sudy performed on 222 women suffering from early stage breast cancer, Burgess et al described a decreasing anuary prevalence of depression and anxiety of 50% in the first year, 25% in the second, third and fourth year and 15% in the fifth year after being diagnosed ().
Depression and anxiety are the main psychiatric comorbidities in metastatic breast cancer patients.
In 2012, Jehn et al described a 31.4% prevalence of depression, a 32.9% prevalence of anxiety and a 17.14% prevalence of both disorders in a group of 70 patients with metastatic disease (). Besides the devastating influence on the patients’ and caregivers’ quality of life, there are studies that state the negative impact of depression on patients life expectancy (). Moreover, most of those subjects experience different types of pain, the pain related behaviours generating an altered quality of life and a functional deficit in this group (), but also a higher level of depression and anxiety. This leads to a vicious circle that affects patients’ lifes and wellbeing, while cure cannot be considered a goal itself. Cancer-related quality of life is a complex entity, with physical, psychological, social and sexual factors all playing a role, () and its improvement becomes the main outcome measure during palliative care.

OBJECTIVES
The main objective of the study was to evaluate the correlation between psychiatric depressive and anxious comorbidities and a modified quality of life of metastatic breast cancer subjects. The secondary objectives were to evaluate the prevalence of those psychiatric disorders in this group, the correlation between pain and adjustment disorders and between the STAI-X1 and BDI scales and the psychopathological findings.

PATIENTS AND METHODS
This clinical study was carried out at the Oncological Institute “Ioan Chiricuţă “Cluj-Napoca, from January 2011 to November 2012, both in the Day Care Hospital and in the Chemotherapy Ward, on a group of 62 female participants suffering from metastatic breast cancer and undergoing chemotherapy at the moment of theevaluation.
The mean duration from announcing the diagnosis was 41.79 months. Patients with psychiatric history, antidepressant medications started more than three days before evaluation, brain metastasis and unwilling or unable to sign an informed consent were excluded.
Patients underwent a complete psychiatric evaluation (according to the DSM-IV() and ICD-10 () diagnosis requirements for adjustment disorders) during their hospitalization. The study was approved by the medical ethics commission of the University of Medicine and Pharmacy Iuliu Haţieganu.

The evaluated items were the age, the living environment, the marital status, social support, financial difficulties, the histological type of cancer, the time from the announcement of the diagnosis, the existence and type of the initial surgical intervention, the use of tamoxifen/ aromatase inhibitors, the somatic comorbidities and the chimio and radiotherapy, the existence and sites of pain, the location of the metastasis. We administered the BDI (16), a 21-question multiple choice self-report inventory, one of the most widely used instruments for measuring the severity of depression, the STAI-X1 (17) a self-report scale evaluating the level of anxiety generated by a certain event, the Numeric Rating Scale for pain (NRS-11) (18) and the QLQ 30 and BR 23 questionnaires (19) for the quality of life, scored according to the authors recommendations.

For the statistical analysis we used the SPSS package. We used the student’s T test and correlation coefficients. The distribution of the variables was tested with Skewnes and Kurtosis, and the general data were analyzed with the Chi Square test. 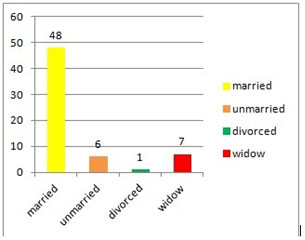 Aproximately half of the group reported important financial difficulties (51,6%), whilst the other half (48,4%) denied them (48,4%) . Most of the participants benefited from a strong social support (91,9%). 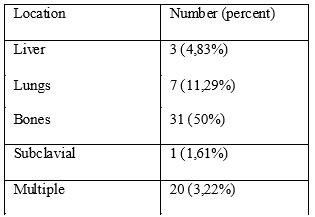 From the histological perspective, as expected, the majority (85.5%) were infiltrating ductal carcinomas, followed by distance by the infiltrating lobular carcinomas (7.14%), the intraductal (3.2%) and the undifferentiated types (3.2%) and in a smaller percent there were lobular pleomorphic (1.6%) and medullary carcinomas (1.6%).
A number of 34 patients had a history of unilateral breast mastectomy, 19 of them sectorectomy, whilst 9 were considered to be inoperable. In addition, 19 subjects were given tamoxifen in the past, and 12 of them received aromatase inhibitors.
The majority underwent multiple chemotherapy sessions (93.5%), and almost half of the group (48.4%) had been treated with radiotherapy also.

Only 6 patients (9.6%) were pain free at the moment of the evaluation, the most frequently reported sites for pain being the bones (limbs, spine, pelvis) (64.4%) and the affected breast area (8%).
Most of the participants were not suffering from other somatic ilnesses (40 cases), part of them having however comorbidities (hipertension, diabetes, gastritis, În majoritatea cazurilor nu au existat comorbiditati somatice (40), restul pacientelor însă prezentând asociat alte afecțiuni (hypertension, diabetes melitus, gastritis, goiter, anemia, leyomioma, spondilozis, deep vein thrombosis).
The prevalence of adjustment disorders in the group was 43.63%, with 16.12% of depressed mood, 19.35% of anxiety and 8.06% of mixed anxiety and depressed mood. The stressor was consider to be, in this evaluation, the diagnosis af cancer and the resulting therapeutic and emotional chalenges.

Figure 2. The types of adjustment disorders

No significant differences were encountered between the two subgroups regarding the age and the time since diagnosis. The STAI-X1 and BDI mean scores were significantly higher in the adjustment disorders group, as well as the mean pain score. More than that, there was a statistically significant correlation with the psychiatric diagnosis for the above mentioned items. 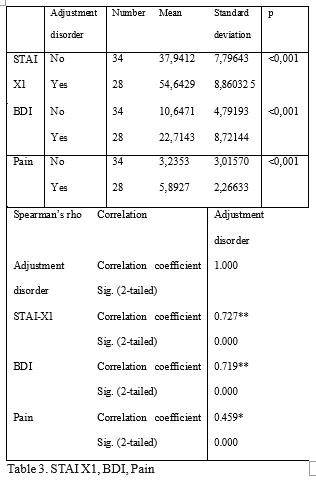 The QLQ 30 and BR 23 scores were obtained for functional and symptom subscales, as recommended by the authors (20).
The patients with no psychiatric issues had signifantly higher mean scores for role, emotionl, cognitive and social functioning, as well as for future
perspective. Those means had a strong correlation with the psychiatric diagosis. 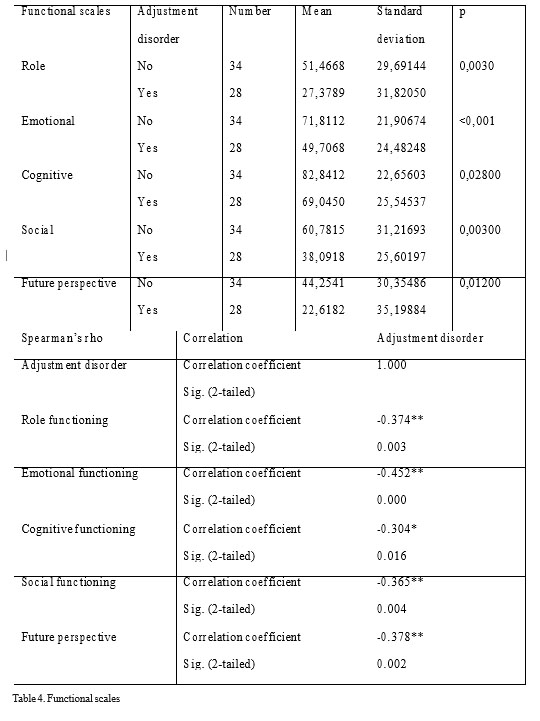 In the evaluated cohort, subjects with adjustment disorders had significantly higher fatigue, pain, appetite loss and financial difficulties scores and those results significantly correlated with the psychiatric diagnosis. 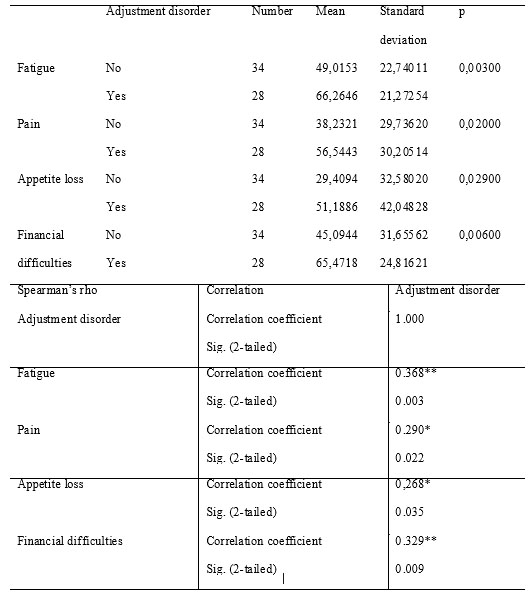 The global health status score in patients with metastatic breast cancer and adjustment disorders was, as reported, inferior in this subgroup, with a statisticaly significant correlation.

DISCUSSIONS
Some scientific studies state that more time since diagnosis generates a lower rate of depression in cancer patients (21). Being unmarried or single (22, 23), financial difficulties (24, 25), comorbidities (25), pain (27) and poorer social support lipsa suportului social (22, 28) were linked by scientists to a higher risk of developing an adjustment disorder in breast cancer patients.
In 1983, Derogatis et al found a prevalence of adjustment disorders in cancer patients of 32% , and Kissane and his team, in a study in witch he compared early stage breast cancer patients and metastatic breast cancer patients, described in 2004 a prevalence og 37% of depression/anxiety type disorders on a group of 200 metastatic patients. In our group the prevalence of adjustment disorders was 43.63%, significanlty higher than the one described in the literature.
The differences in the reported prevalence could be generated by different nosologic framing of the symptoms, according to the subjective experience of the examiner, but also by the economic and social burden which can influence the emotional status of these patients. 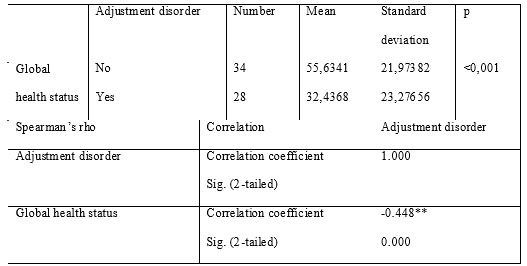 The results we obtained concerning the STAI-X1 and BDI mean scores confirmed the validity of the evaluation and also the efficiency of the mentioned scales despite the interfering of the physical symptoms (i.e. weight loss, fatigue etc.) generated by the malignancy. Pain was more intensely perceived by the patients suffering from depression and anxiety. The causal relationship remains debatable, as it is a known fact that pain generates psychiatric symptoms, but also that depression and anxiety lower the pain threshold.
. Important differences resulted in the quality of life subscales scores, all indicating a lower quality of life in the adjustment disorder subgroup.
The role functioning was significantly influenced in the psychiatric disorders subgroup comparing to the rest of the subjects, with a mean score of
27.37. The reported refference value is 63.4 (), higher than the mean in the evaluated cohort (40.58) and even than the mean in the subgroup without adjustment disorders (51.46).
As expected, the emotional functioning was inferior in the adjustment disorder group, with a statistically significant correlation – 49.70 (refference value 64.8) (). Moreover, an inferior cognitive (reference value 81.1) and social functioning (reference value 70.1) correlated significantly with the psychiatric diagnosis. Also, the future perspective score was lower in the patients suffering from anxiety and depression.
Regarding the symptoms scales from QLQ 30 and BR 23 the statistical differences between the two subgroups significantly correlated with the psychiatric diagnosis for the items mentioned in the results chapter. As expected, fatigue (66.26 – reference value 40.1) and appetite loss (51.18 – reference value 28.6), typical symptoms of depression and anxiety, were more intense in the adjustment disorders patients. The financial difficulties were significantly more evident in patients with adjustment disorders (reference value 16.8), and we considered them as generators of mental disorders. We noticed the impressing difference between our group’s mean for thie item (54.69) and the reported reference values (16.8) suggesting a devastating impact that ilness has on individuals’ financial resources in our country comparing to the other EU citizens.
In all, the quality of life of adjustment disorders patients, as reflected by the Qol item (reference value 50.9), which we consider to be the best description of the subjective perception of wellbeing was significantly poorer comparing to the rest of the group and significantly correlated with the psychiatric diagnosis (correlation coefficient -0,448, p = 0.000).
The limitation of our study consists in the relatively small sample of evaluated participants. Further systematic evaluations need to be done in order to accurately detect the correlation between psychiatric disorders and an altered quality of life in this group of population.

CONCLUSIONS
Depression and anxiety have an important prevalence in the metastatic breast cancer population and should be thoroughly prevented, evaluated and treated. Those comorbidities influence the quality of these patients’ life by both reducing their functional level and by amplifying certain symptoms.
Pain and adjustment disorders are interconected and impose indivudualized approach.
A p p r o p r i a t e p r e v e n t i o n , s c r e e n i n g a n d therapeutic approach is needed in order to obtain a better collaboration with the patient and a better quality of life for both patients and caregivers.