CHARACTERISTICS OF THE ONSET OF PERSISTENT DELUSIONAL DISORDER

INTRODUCTION
Persistent delusional disorders have accounted for a less researched area of psychopathology, one reason being the changes over time in the concept and the diagnostic criteria, with them not fully crystallized to date.
One reason for this attitude is a wide concept on schizophrenia in the sense of including in this disorder the majority of delusional psychoses with a prolonged evolution (DSM IV adheres to this point of view) (1). The current definition of schizophrenia maintains the defining heterogeneity, the clinical picture and its borders, something that has accompanied its evolution over time. Therefore, in some cases, the diagnostic of schizophrenia can only be set in the presence of a hallucinatory delusional or just delusional (if bizarre) symptomatology. However, the strictly delusional hallucinatory symptomatology is not specific to schizophrenia.
In this context, Delusional disorder (1, 2), although widely accepted, is understood predominantly as centered on paranoia. It presents with a stable and well- defined delusional system, which is usually „embedded” from a personality that retains many normal aspects, unlike the situation in schizophrenia, where there is a widespread disruption of personality, in addition to the psychotic features.(3)
However, especially in the ICD 10, a persistent delusional-hallucinatory psychosis (Other persistent delusional disorders, F22.8) is accepted as being different from paranoid schizophrenia, even though it has some symptomatic elements of schizophrenia (2). These can be accompanied by depression and are more common in adulthood and old age (2).
According to Munro, the current official approaches (WHO ICD 10 and DSM IV) on Delusional Disorder (DSM IV), respective Persistent Delusional Disorders (WHO ICD 10), present us with poor and not very helpful descriptions of these disorders, along with diagnostic criteria, which are over-restrictive (4).
Thus, through this work we are trying to bring a clearer and more complete understanding of these nosological entities, by analysis of parameters regarding the onset of Persistent Delusional Disorders.Therefore, in a retrospective study we analyzed: the value of DUP and onset diagnostic, the average age of onset, the presence of life events with a potentially triggering role and the means of entering the psychiatric circuit.

METHODOLOGY
A group of 60 persistent delusional disorders subjects (Persistent Delusional Disorders, F22, ICD 10 WHO) has been selected out of the Case Register from the Psychiatric Clinic in Timisoara. This register is a document where all new cases of endogenous psychosis were recorded between 1985 and 2006, which were afterwards prospectively followed from a demographical, social and its clinical evolution point of view, by a specialized and supervised team. The project’s initiator, the supervising and administrative team remained unaltered since 1985 to date.
Within the group there were subjects with the following characteristics:
– The psychotic disorders had their onset in 1999, 2000,
2001 or 2002;- The age at onset was between 18 and 65 years of age;- The present clinical diagnostic according to the ICD 10 is Delusional Disorder, F22.0 or Other Persistent Delusional Disorders, F22.8, which were maintained in the last 4 years of evolution;- They are actively followed in the Mental Health Center in Timisoara and the ambulatory psychiatric practices of the city;- There is a voluntary participation without any kind of financial motivation on part of the researchers;
Subjects with a history of abusive consumption of any kind and those with drug or alcohol addiction have been excluded.
Within this group, the following characteristic parameters of the onset of a psychiatric disorder were evaluated: the diagnostic of onset (according to WHO ICD
10) (2), the DUP value, the average age of onset, the presence of life events with a potentially triggering role and mode of entry into the psychiatric circuit.
Data were obtained from the analysis of hospital sheets and query of databases, through discussions with the patient’s treating physician, with the patients and caregivers, where appropriate.
The collected data were both categorial, as well as numeric. Whenever possible, it was preferred to quantify data in a numerical form, in order to allow for a more detailed analysis of the data.
S t a t i s t i c a l a n a l y s i s w a s p e r f o r m e d b y quantification of the data collected, depending on their specific, as well as categorial or quantitative data. Given that this is a clinical population for which there are no known means and standard deviations (for comparison), we used the Shapiro-Wilks normality test, its results indicating that the data are different from the normal distribution.
Consequently, we used non-parametric type tests, namely:
– The Spearman correlation test
– The Kolmogorov-Smirnov test for comparison
– The difference of frequencies χ2 test for the categorial data type

RESULTS
Gender distribution
According to gender distribution, the group consisted of 60 cases, of which 17 (28.3%) men and 43 (71.7%) women. This result corresponds to previous studies indicating a higher proportion of this type of pathology in females (5, 6, 7, 8, 9).
The diagnosis at onset
Most of the patients (25 cases – 41.7%) had from onset a diagnosis belonging to the group of Persistent Delusional Disorders (F22). Another important number of patients (24 cases – 40%) had a diagnosis of onset from the diagnostic group Acute and transient psychotic disorders (F23). Only one patient had an onset diagnosis of schizophrenia. We noted that, for most of the patients (50 cases – 83.3%), the psychotic symptoms were easily identified since onset.
Only 10 patients were hospitalized at onset with diagnostics belonging to affective disorders or adaptive diagnostic groups (see table 1).
Age at onset
The average age of onset for subjects in the group was 41.02 years (std.dev. = 9.21 years), with the lowest age of onset being 23 years and the eldest, 60 years (see table 2).
Differences in age of onset by gender
In the group there are no statistically significant differences regarding age of onset between the sexes (see table 3).
Duration of untreated psychosis (DUP)
DUP = time elapsed between the first appearance of frank psychotic symptoms and initiation of a therapeutic project. Concepts such as duration of untreated psychosis, duration of untreated disorder also become operative in delusional psychoses. Furthermore, delusional disorder is part of a nosological spectrum of the concept called “the first episode of psychosis”.
Although this concept was initially covering only the psychotic pathology, it is now increasingly used for other psychiatric pathologies (non-psychotic affective disorders or anxiety, etc.).
The average length of DUP is 67 weeks (std.dev.
= 76.2 weeks), the equivalent of approximately one year and three months. The lowest DUP recorded was of 1 week and the highest is of 384 weeks (more than 7 years!) (see table 4).
Presence of stressful life events with potential role in triggering the first episode Major life events that occurred during the 12 months prior to first psychiatric admission were taken into consideration. If reactive delusional disorders exist, the onset of the disease is considered to be reactive. In the sample with persistent delusional disorder in case of 4 patients this aspect was difficult to establish, therefore these patients were excluded from the calculation of this value (see table 5).

Table 1. The diagnosis at onset 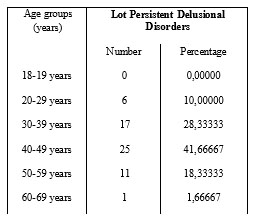 Table 2. The age of onset on age groups

Table 3. Age of onset on sexes 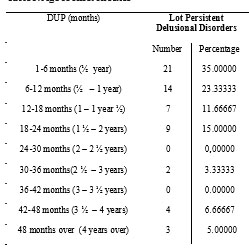 Table 4. Distribution of subjects according to DUP

Table 5. Presence of stressful life events with potential triggering role in the lot

With regard to the distribution of reactive onset by gender, the sample has the following distribution (see table 6): 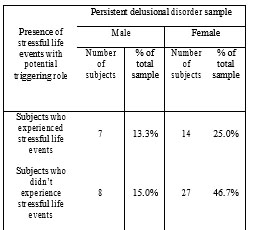 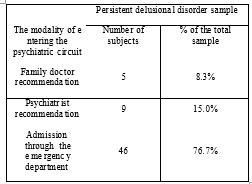 Table 7. The modality of entering in psychiatric circuit

It is observed that more than three quarters of the subjects entered the psychiatric circuit through the emergency services, whilst only a quarter were sent to the psychiatric services by a family doctor or by a specialist psychiatrist.

CONCLUSIONS
As observed the diagnosis of Persistent Delusional Disorders is relatively stable and can be established from the first admission in more than one third of the cases.
Most of the subjects with persistent delusional disorder (25 cases – 41.7%) experienced their first episode of the disease between 40-49 life decade. Furthermore, the mean age of onset is similar to the one mentioned in most studies (6, 7, 9, 11, 12, 13, 14). Grover (5) considers the most frequent interval of onset between 34-45 years and in the study he carried in Northern India on 88 patients and published in 2007, he mentions a mean age of onset in the sample of 37,9 years (11). Portugal (15) within his sample with delusional disorder (370 patients) has found a mean age of onset of 55 years (15).
Within his study on 86 Chinese with delusional disorder Mei-Chun Hsiao (6) reported a mean age of onset of 38,7 years for men and 46 years for women (6). In our study we found an earlier onset in men, but the difference is not statistically significant.
Regarding the mean duration of untreated psychosis is observed that more than half of subjects (58.3%) had a duration of untrated psychosis of maximum one year, the majority of subjects (85%) had a duration of untreated psychosis of less than 2 years.
This duration of untreated psychosis is lower than the one mentioned in the studies of Hsiao or Opjordsmoen and Retterstol that have reported a DUP of about 2.4 years and respectively 2.3 years (6, 16). However, our outcome is similar to that mentioned by Opjordsmoen in his 1988 study on 41 subjects with delusional disorder, that is of about 10 to 12 months (10).
Regarding the way of onset, it has been observed that reactive onset is not typical, and if occured is more frequent among women; this aspect is also mentioned by Opjordsmoen and Retterstol (16).
Percentage of triggering factors is similar to that mentioned by Grover within his sample of persistent delusional disorder, namely 39,8% (11).
Admission through the emergency services also indicates that: patients and their families are more often reserved and delay in asking for help due to several reasons (denial of problems, fear, minimization of the problems, stigma associated with the condition, etc.) until reaching the point when the intensity of the mental symptoms causes an emergency admission; also family doctors that patients have already addressed to may be reluctant to seek professional help for their patients for reasons such as: negative experience with mental health services, lack of information/knowledge regarding specialized mental health services and how to access them, fear of offending families through referring to mental health services (17).

DISCUSSIONS
The results we obtain show through analyzed parameters that persistent delusional disorders are nosological entities that can be defined from the onset, in most of the cases.
It should be noticed that an onset diagnosis of practically has “swallowed” paranoia and paraphrenia diagnosis, and at present many psychiatrists still frame within this diagnosis most of the cases with persistent delusional disorder ( F 22, ICD 10 WHO) (2), has been only in a single case. This comes to our attention the fact that the confusion with paranoid schizophrenia can be avoided with greater attention by psychiatrists, who must not remain ignorant of these nosological entities. This signal was drawn by some psychiatrists concerned about this area of psychopathology (especially Munro) (4).
Also in this regard and for a clearer definition of these entities, a more detailed description of these cases is required, as well as conducting clinical and evolutional prospective longitudinal studies.
Age of onset is not a a diagnosis criteria or of differentiation within psychosis, although it is known that schizophrenia has been described as occuring in younger ages as compared with other psychoses. Most of the descriptions and of the studies have noted, however, that paranoia, paraphrenia and now the current delusional disorders occur at an older age than schizophrenia, namely in mature adult and third age persons, which is also relevant in the present paper.
In addition, the concept of DUP, a relatively new concept introduced in psychiatry, has a long time been present in some studies (6, 16), without however the use of this term. Although, this feature has been developed in connection with the first episode of psychosis and it must be analyzed in future studies related to persistend delusional disorders.
Separation of these conditions from schizofrenia is unquestionable, however its relationship with other paranoid spectrum disorders it is yet to be defined and this is acheivable only though studies dedicated to these disorders that are still globally marginalized.

Conflict of interest: none