COGNITIVE FUNCTIONS IN PATIENTS WITH SCHIZOPHRENIA:ASSOCIATIONS WITH CLINICAL FEATURES

MATERIALAND METHODS
1. Participants
33 patients (23 women and 10 males), recruited from the Second Psychiatric Clinic Cluj-Napoca, who met ICD-10 and DSM-IV-TR criteria for schizophrenia and 31 healthy controls (23 women and 8 males) participated as subjects. Demographics and clinical parameters are shown in Table 1.

Positive and Negative Syndrome Scale;bGlobal Assessment of Functioning
Table 1: Clinical and demographic characteristics of patients with schizophrenia and controls

Exclusion criteria included presence of another Axis I diagnosis, intellectual disability, a history of significant brain injury, neurological condition, electroconvulsive treatment delivery in the last six months or lifetime history of substance abuse that was deemed severe enough to have had an independent effect on cognitive functioning.
Patients and controls did not differ significantly in age (t=-0,17, p=.864). The sex ratio between the two groups was not significant (t=-0,39, p=.695). The level of education of controls matched that of schizophrenic patients, with no significant difference (t=-0,55, p=.581).
Participants were explained the purpose and procedures of the present study, and a written informed consent has been obtained from all subjects. The study was approved by the Medical Ethics Committee of UMF “Iuliu Hatieganu” from Cluj-Napoca.
2. Procedures
2.1. Neuropsychological assessment
Following psychopathometrical tests have been applied: Trail Making Test (TMA, TMB)-evaluates vigilence, orientation and mental flexibility (17), but also visuo-motor coordination, rapid visual searching and information processing speed (18). Rey Auditory-Verbal L e a r n i n g T e s t ( R AV LT ; 1 7 ) i n v e s t i g a t e s memory.Wisconsin Card Sorting Test (WCST; 19) measures cognitive flexibility and problem-solving skills. To test phonological fluency, subjects were asked to produce orally as many words as possible that began with letter F and S, excluding proper nouns or places. Semantic fluency was examined by asking the subjects to give as many examples as they could for the two categories: animals and plants.
2.2. Clinical ratings
The Positive and Negative Syndrome Scale (PANSS; 20) is a semi structured clinical instrument that assesses the degree of psychopathology on a number of symptomatic domains in patients with schizophrenia. The World Health Organization Quality of Life (WHOQOL- BREF; 21) comprises 26 questions which provides separate scores for each of the following domains:
physical health, psychological health, social relationships and environment. Global Assessment of Functioning (GAF) (22) assesses overall psychological functioning, social and employment, on a scale from 1 (poor functioning) to 100 (high functioning) and is one of the axes (axis V) DSM-IV-TR
2.3. Statistical analysis
All results are presented as mean±SD. Two- tailed independent t-test was used to compare participants’ scores on the cognitive tests. Pearson’s correlations were used to determine associations among measures of cognitive function and QOL, functioning and symtomatology.
All analyses were conducted using SPSS version
17.

RESULTS
1. Profile analysis of neuropsychological measures
The results of the between-group comparisons are displayed in Table 2. 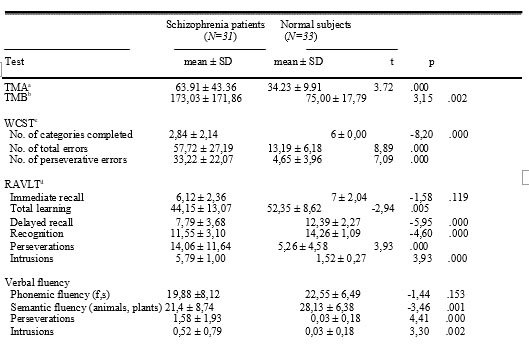 As expected, controls performed significantly better on most cognitive tests, with highly significant difference for attention and executive function tests. Regarding verbal memory, there was no difference in performance on immediate recall between patients and controls. However, high significant difference was observed on delayed recall, total learning and recognition trials results between the two groups. Moreover, patients with schizophrenia performed a significant higher number of errors, meaning more perseverations and intrusions than controls. There was high significant difference between patients and controls on semantic fluency tests, and no difference on phonemic fluency performance. There could be recorded a high number of perseverations and intrusions were on verbal fluency tests in patients group as well.
2. Relationship between the perfomance on cognitive tasks, severity of symptoms, quality of life and functioning in patients QOL is negatively correlated to TMA and TMB scores and positively correlated to verbal fluency test results. There were also evident correlations between recognition and two QOL domains: physical and psychological health. The social relationship domain is correlated to semantic fluency results (see Table 3).
GAF scores correlate to TMA, TMB, WCST and verbal fluency results, and there is no correlation with verbal memory results (see Table 4). 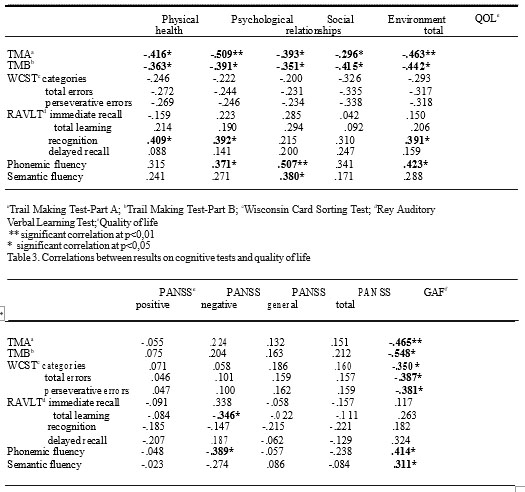 DISCUSSIONS
The current results, assessing various cognitive domains, demonstrated that patients with schizophrenia showed a significantly general lower performance compared to a similar healthy control group in almost all cognitive tests. These findings are similar to previous researches on cognition in schizophrenia (23).
Patients’ poor performance on TMA and TMB stand for their reduced ability to visuo-perceptual processing and poor motor coordination and visual search.
As expected, patients showed poor results in WCST by completing significantly fewer categories and recording a higher number of perseverative errors (24, 25,
26). Compared to healthy controls, individuals affected by schizophrenia have significant deficiencies in problem solving tasks, and tasks which require good organization and strategic planning. Patients have difficulties in shifting cognitive sets in response to feedback from the outside, being unable to modulate impulsive responses and to direct behaviour to achieve the intended goal. Additionaly, they showed difficulties in processing information, a reduced mental flexibility and poor attention.
Verbal memory performance in terms of delayed recall, recognition and total learning is significantly decreased in patients compared to controls. This means the reduced ability to encode usual learning strategies, with a high percentage of confusion shown by the large number of intrusions and repetitions in memory processes.
These outcomes are supported by a series of studies demonstrating that in patients with schizophrenia verbal memory performance is significantly lower compared to healthy individuals (27).
Results confirm the semantic and phonemic fluency impairments in schizophrenia (28, 29, 30). It was also highlighted that, compared to healthy individuals, patients reveal vocabulary deficits, more affected being categorical fluency areas (31). Patients produced more phonemic associations than semantics (25). Moreover, there were a higher number of errors such as perseverations and intrusions in patients than in controls (28).
According to other studies, this research has confirmed an inverse relationship between the results on cognitive tests and the quality of life in patients with schizophrenia. Significant correlations were revealed between patients’ performance in attention and verbal fluency and the social domain of the quality of life. These findings are supported by the researches which d e m o n s t r a t e d a s s o c i a t i o n s b e t w e e n p a r t i c u l a r neurocognitive areas and social functioning. Vigilance, working memory and executive functions could be predictors for community functioning, problem solving and psychosocial skills acquisitions of patients with schizophrenia (13). There was no evidence of strong influence of memory tests performance on patients’ functioning and quality of life level reports. Similar to literature data, results of the present study discloses weak association between overall quality of life and verbal memory (32).
GAF results are strongly correlated to performance on attention, executive function, considering here reasoning and problem solving, and also to verbal fluency, both phonemic and semantic.
PANSS scores did not correlate with any of the results obtained in evaluating cognitive functions, explaining that there is no relationship between psychopatology and cognitive impairment. Similar results were obtained by Gold and his colleagues (33) suggesting that cognitive deficits in schizophrenia are independent of the clinical manifestation of the disease. However, the current study shows inverse correlations between negative symptoms and deficits in learning or verbal fluency, particularly with phonemic fluency.
Symptoms affect quality of life of schizophrenic patients, the more severe symptoms are, the more impecunious quality of life level is. Negative symptoms seem to be related more to the quality of life, especially to the social relationships domain. The results are similar to those obtained by Wegener and his colleagues (34) suggesting a link between neuropsychological function and certain aspects of quality of life, which may be affected by the patients’ psychological distress.

CONCLUSIONS
1. Individuals suffering with schizophrenia perform less compared to healthy controls on tests assessing cognitive function: attention, memory, executive function and verbal fluency.
2. Cognitive impairment is demonstrated by the patients’ reduced ability of visuo-perceptual processing, poor motor coordination and visual search, deficiencies in problem solving, organization and planning, as well as difficulties in using strategies and a lower rate of learning, compared with healthy participants.
3. This study did not exhibit a close relationship between verbal memory deficits and quality of life and global functioning of these patients.
4. Cognitive deficits are independent to clinical features of the illness. Anyway, it seems that negative symptoms correlate to learning deficits and also to phonemic deficits.
5. The more severe symptoms are, the more impecunious quality of life of these patients is. Negative symptoms influence mostly the social relationships domain.