QUALITY OF LIFE IN DEPRESSION

DEFINITIONS AND CONCEPTS:
In 1948 (1) World Health Organization (WHO) defined health as „a state of physical, mental and socialwell-beingand not merely the absence of disease.” In this context it becomes increasingly clear that to address a larger problem, that of restoring health, treatment of any disease should target improvement beyond the specific signs and symptoms. Achieving such standards involves targeting the achievement of some results both in terms of physical and mental health.
The term „quality of life” has been used increasingly more often and became such a „popular” term that led to a wider understanding of „wellness” including aspects of happiness and satisfaction with life as a whole (2).
There are many definitions regarding the quality of life and, although the term „quality of life” makes sense for almost everyone and is approached by many academic disciplines, its meaning varying more or less for each person or group. (2)
Most definitions of quality of life explicitly state that when evaluating quality of life, perception of the different circumstances in their lives should be considered in patients (1). This includes perceptions of social behaviour, physical health, functioning in daily activities and work, economic status and the general feeling of wellbeing. (1)
WHO defines „quality of life” as the individual’s perception of his position in life in the context of the cultural and value system in which they live and in relation to their goals, expectations, standards and concerns. (3)
Although it represents a concept with a vast and subjective acceptance, the quality of life is complexly influenced by physical health, psychological state, level of independence, the relationship with the prominent features of the environment in which the person operates. QUALITY OF LIFE IN RELATION TO HEALTH
The concept of quality of life in relation to health has been developed since the 80s and refers to those aspects of quality of life have been proved to clearly affect health either physically or mentally.(2)At the individual level, perception on physical and mental health and the elements with which they are correlated, such as: level of functioning, social support, socio-economic status are included. There are some health issues that seem not to hall-mark on the quality of life at the time of evaluation such as a genetic predisposition without clinical expression at the time of assessment, that is unknown to the subject. (2)
At Community level „quality of life in relation to health” includes resources, conditions, policies and practices that influence the perception of health and function.
Self-assessment of health status has been shown to be a stronger predictor of mortality and morbidity than other more objective measurements of health. (2)
Interpretation of these data may help to identify the needs of health policies and legislation concerning health, can help in making decisions regarding the allocation of resources, develop strategic plans and can monitor the effects of the interventions in the community. MEASURING QUALITY OF LIFE
In order to evaluate the quality of life,a plurality of parametershas been used over time .
It is considered:
-socio-professional status
-capacity/incapacity of performing the duty tasks
– capacity/incapacity to perform daily activities
-economic status
-existence of a support system
-existing comorbidities
-interpersonal relations and social involvement

WHO together with 15 collaborating centres have developed two tools specifically for measuring quality of life: WHOQOL-100 and WHQOL-BREF.(3) These scales have the advantage of providing a subjective vision that people have on how the disease affects their lives some corroborating several areas of interest to assess quality of life (physical health, psychological c h a r a c t e r i s t i c s , l e v e l o f i n d e p e n d e n c e , s o c i a l relationships, environment , spirituality / religion / personal beliefs). In the short WHQOL-BREF version, these areas were merged resulting in four major areas: physical, psychological, social relationships and environment.
Many published studies that evaluated different aspects of quality of life use separate scales that assess the degree of disability (in different areas: work / activities, social functioning, family relationships) and productivity ( lost days, unproductive days) or social functioning.
When quality of life is used to estimate the cost effectiveness of some treatments or interventions or health policies,the terms of ” Years of Healthy Life (YHL)” and ” Diasbility-Adjusted Life Years” ( DALYs) are often used.
QUALITY OF LIFE IN DEPRESSION
Depression is not only a common disorder, often chronic and recurrent, but is essentially associated with the degradation ofthe lucrative activity and of social and psychological well-being state.(4) Major Depressive Disorder is the fourth leading cause of disability worldwide and is projected to end up being the second leading one in 2020. (5) There are studies (The Medical Outcomes Study) whose results show that individuals with depression show a physical, psychosocial and role functioning comparable or worse than those who have chronic medical conditions. In addition, the more a patient remains symptomatic for a long time, the smaller the chances of recovery(4)(6) and therefore he associated dysfunction will be higher.
The impact on quality of life is related to the severity of depression.(6) Hence, severe depression has profound consequences on the social and economic level, often involving high percentage of complex comorbidities and mortality (eg. Increased risk of cardiovascular disease and unfavorable outcome of cardiovascular diseasesand sucide ), reduced quality of life and significant personal and social costs caused by lower labor productivity, absenteeism and use of health services.(6)
It results that depression, like other chronic medical conditions who are following a pattern of remissions and relapses are associated with two types of burden in connection with illness. The first category is represented by what the affected person feels and may include discomfort, pain or suffering, difficulties in performing daily activities. The second category is represented by the economic burden that includes the costs of providing health and social services, loss of productivity, the burden given to the caregivers and family.
Functional impact of depressive symptoms can be summarized in Figure 1. 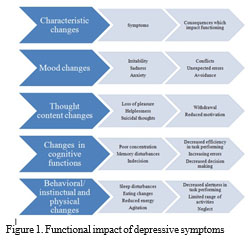 Referring to the personal plan, in depression, the daily activities, family relationships and social life.
Specific areas of health: physical, psychological and social. Each of these can be measured either by objective assessments or by subjective perception. In addition each of these areas include several aspects such as different symptoms, ability to function and disability.
While all mood disorders are associated with a lower quality of life, major depressive disorder shows a strong association with the quality of life as a whole and dysthymia and bipolar disorder with social interaction. (Axis I_andQol). (7) The severity of the current episode is one of the most important factors when assessing its social impact. Hence, the number of days that a person with depression has not been able to fulfill her role in the last
365 days increased from 3 in the case of mild depression to 96 in the case of severe depression. (8) Among the persons with major depressive disorder in the past 12 months almost all (96.9%) reported a deterioration in role functioning associated with depression on at least one of the four areas of SDS, 87.4% of them describing the damage as being at least moderate. (9)
In one study which assessed the damage to the quality of life in patients with depressive and anxiety disorders (1) 85% of patients with chronic depression or double depression, only 63% of patients diagnosed with major depressive disorder and only 56% of those diagnosed with dysthymia presented on the quality of life questionnaires scores adequate to the interval of severe degradation.
The same study indicates that specific symptoms of the disease have a modest influence over the quality of life, suggesting the involvement of other factors. Such factors could be the presence of algal symptoms and comorbid disorders, also personality traits, financial resources, availability of social support and achieving personal goals and personal success level.
The association between algal symptoms or some somatic disorders and depression lead to a significant further deterioration in quality of life (10)(11)(12) and influences the results obtained after treatment. The presence of algal symptoms is associated with less improvement in quality of life as perceived by patients following antidepressant treatment (10), and previous history of major depressive disorder is associated with a greater decline in physical functioning and health status mental worse among patients diagnosed with breast cancer. (13). Dissatisfaction / discontent with life on a long term might be a stronger predictor of major depressive disorder compared with concomitant discontent / dissatisfaction who seems to correlate strongly with depressive symptoms. (14)(15)Some aspects of depression may be considered intangible and difficult to measure. These include pain, family’s , caregivers’ and friends’ woe and stress suffered by them and other types of relationships, which, although can not be measured directly, manifest by disruption of Because these negative consequences of depression are
complex and difficult to measure, they are generally not included in the cost estimates of depression, andformal estimations of the cost of depression both the direct and the indirect ones. However, the vast majority of interventions for the treatment of major depressive disorder are considered cost-effective.(16) This should be an additional argument for early detection and proper treatment of mood disorders.