PERCEPTION OF QUALITY OF LIFE AND DISABILITY AMONGST PATIENTS WITH SCHIZOPHRENIA: DIFFERENCES BETWEEN GENDERS

INTRODUCTION
Schizophrenia is a chronic, invalidating psychiatric illness that interferes with all major functioning domains. Typically the incidence was reported as equal in both males and females, although more recent studies reveal a higher incidence among males. (1)
Throughout time there has been an interest in studying differences between genders in several areas, such as age of onset, typical symptoms, pre-morbid level of functioning and progression features.
Females have been reported to have an later onset age, by a mean of 5 years; peak incidence being between the ages of 21 and 25 for females and 25 and 32 for males. (2) Females have a second incidence peak in the forth decade of life. (3)
Evidence from several studies suggest that in female patients there is a lower negative impact on life quality deriving from a lower number of hospital admissions and a shorter average of days spent in hospital in one admission (4), a faster remission on lower neuroleptic drugs doses than male patients (5). Despite these findings, difference between genders in long term prognosis tends to be smaller, mainly because there is a faster deterioration rate in females at older ages (6).
There have not been reported major differences between genders where positive symptoms and formal thought disorders (7) are concerned in most studies, but there are differences concerning clinical expression of these alterations, substance abuse and anti-social behavior for instance being more frequent in male patients (4, 7). Symptoms from the affective cluster are more frequent in females (8) and negative symptoms tend to be more frequent in males; this seems to be rather a primary result of the pathological process (9).
Quality of life has been a major area of interest in the last few years where mental illness is concerned. This concept is a multi-dimensional one and includes domains related to health but also social ones, like work, family, religion, and environment. Due to these multiple aspects quality of life is characterized mainly by individuality and subjectivity (10,11). The most practical definition is that quality of life represents an individual’s perception of his or hers position in life in a cultural and personal value systems context, according to objectives, expectations and standards (12). Numerous studies tried to asses quality of life for schizophrenic patients, concerning both demographic and social aspects (age, marital status, etc) and pathological ones (symptoms, response to treatment, etc.)
Disability is a complex phenomenon which entails interaction between body features of an individual and features of the society in which that individual lives (13). Therefore, mental disability should reflect, or derive from an individual’s deficits influencing his/hers learning, livinf and working environments (14).

RESULTS
Sample characteristics: Socio-demographic characteristics- for this research, a number of 143 people were interviewed (84 women, 58 men). Age of subjects varies between 19 years and 60 years, with an average age of 40.2 years (SD = ±10.36 years).
Regarding the last school graduated, most subjects had completed secondary and post-secondary (42.8%) education levels, followed by those who have graduated from a vocational school (21.8%). Subjects with higher education represent a ratio of 19.1% from the sample, and those who have a primary level of education totals 16.4% percent. Regarding the marital status, the majority of subjects included in the study are single – 49.1%, a share of 25.4% being divorced or separated. Subjects involved in a married or cohabiting relationship represent a percentage of 24.6%. Only one of the subjects is widowed (0.9%)
Specific Characteristics: The onset age of illness for the subjects included in the study varies between 18 years and 37 years, with an average of 24.13 years (SD= 4.59 years). Duration of illness for the subjects is 16.2 years with a standard deviation of 9.75 years. It ranges from one year to 38 years (see Table 1)
Statistically significant difference by Gender – Socio-demographic characteristics Age
The average age for the women included in the sample is 43.23 years, with a standard deviation of 9.9 years. The average age of the men are lower than those of the female, namely 35, 82 years old, with a standard deviation of 9.47 years. Independent samples t test shows that the difference in age between the female and the male is significant (t = 4.477, df = 141, p <.001). The difference in age is 7.41 years ± 3.27 years. To estimate the effect size of the sex variable over the age was used Cohen `s d. Since the Cohen’s d value is below the 0.8 limit (Cohen`s d = 0.76) we can say that the effect is an average one. 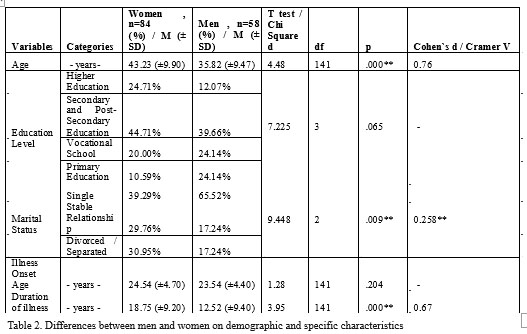 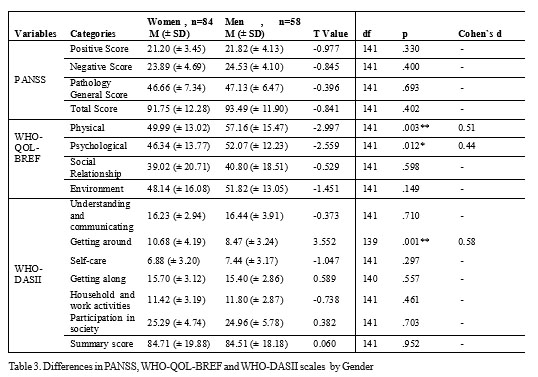