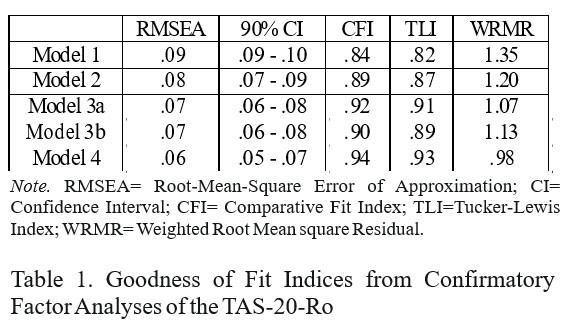 Examination of these indices reveals that Models
1 and 2 did not achieve adequate fit. The three remaining models appear comparable. However, Model 3b has slightly lower CFI and TLI and higher WRMR than the o t h e r r e m a i n i n g m o d e l s . M o d e l 4 , a l t h o u g h demonstrating adequate fit, does not lend itself to meaningful interpretation as the 3-item PR factor demonstrated large statistically significant correlations with the DIF (r = .89), DDF (r = .81), and IM (r = .88) factors, suggesting that a three factor model is likely more meaningful. Further, although all three items had statistically significant loadings on the PR factor, item 5 (negatively keyed) demonstrated a weak loading (.23) indicating much of the variance associated with this item is not well captured by this factor, leaving the other two items as the sole indicators. Typically at least three
substantial indicators (loadings of ≥ .30) are required to
specify a factor. Thus, model 3a, the standard three factor model, provided the best and most interpretable fit to the data. Item factor loadings from the CFA for Model 3a are shown in Table 2.
Correlations among the three latent factors and observed correlations among the TAS-20-Ro total score and the three factor scale scores for this standard three factor model are reported in Table 3.
Means and Standard Deviations (SDs), and Reliability for the TAS-20-Ro and its Factor Scales
The means, SDs, internal consistency reliability coefficients, and MICs for the TAS-20-Ro and its three factor scales are presented in Table 4.
The coefficients for the TAS-20-Ro total scale and the DIF and DDF factor scales are well above the standard of .70, indicating adequate internal consistency. The alpha coefficient for the EOT factor scale is .57, which is below the acceptable level. The MICs for the total TAS-20-Ro and the DIF, DDF, and EOT factor scales are all within the range of .15-.50, which is the range recommended for multifactor scales assessing broad constructs (29, 30). 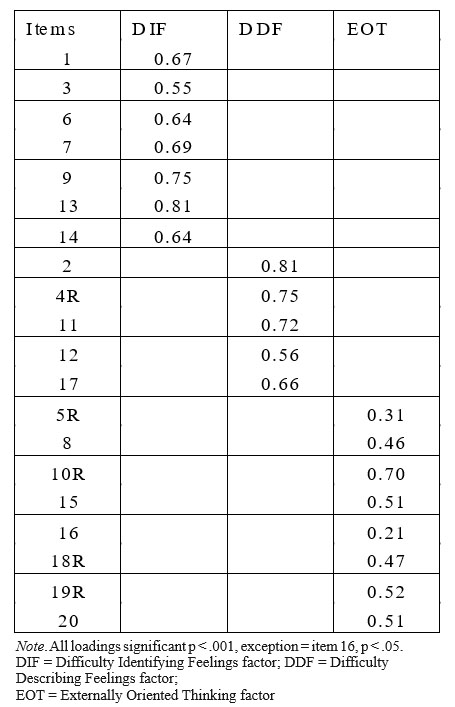 Table 2. Factor loadings from standard 3-factor model of the TAS-20-Ro 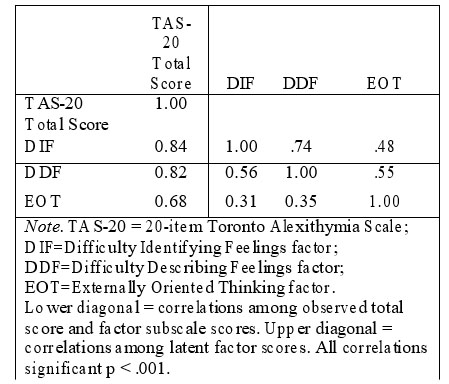 DISCUSSION
The overall aims of this study were achieved. The TAS-20 was translated into Romanian and cross- language equivalence was established. Internal reliability and adequate fit of the standard three factor structure of the TAS-20-Ro were demonstrated in a university student sample. The results of the internal reliability of the total scale are comparable to those obtained with the original English version (8), as well as other versions, including Chinese, Greek, Russian, and Swedish translations of the scale (12-14, 31). Similar to results reported for the original English derivation sample of university students (8), the internal reliability estimates for the DIF and DDF factor scales are above the standard of .70, and the mean inter-item correlation coefficients are within the recommended range of .15-.50, indicating adequate homogeneity of item content. Although the internal reliability estimate for the EOT factor scale is well below the standard, and the mean inter-item correlation coefficient of .15 is slightly low for the assessment of narrow band constructs, EOT assesses a broader universe of content than either DIF or DDF, suggesting that the MIC for EOT was also within the acceptable range recommended by Simms and Watson (29). Less than optimal internal reliability coefficients estimates have been reported for the English version of the TAS-20 (14) and for many translations of the scale (11-14), which has led to the suggestion that the items assessing externally- oriented thinking may need some revision. Nonetheless, significant correlations were demonstrated between observed scores on EOT and the total score as well as among latent factors.
Comparing the fit of five different factor solutions, it was determined that the 1-factor and 2-factor models, and also a 3-factor model in which the DIF and DDF items form one factor and the EOT items are separated into a PR factor and a IM factor, demonstrated poor fit for the TAS-2-Ro. These results are consistent with the findings from several other translations of the TAS-20 as well as with the original English version (11). Although the 4-factor model showed adequate fit, its PR factor performed poorly; thus removing this model from further consideration. Zhu, Yi, Yao, Ryder, Taylor, and Bagby (12) found that the 4-factor model showed a slightly better fit for their data than the standard 3-factor model in a Chinese student sample, but not in a clinical sample; however, they preferred the more well- established standard 3-factor model based on Müller, Bühner and Ellgring’s (24) assertion that CFAs may be biased in favor of more complex models.
A limitation of this study was the use of a student sample, which could have potentially influenced the resulting factor structure of the TAS-20-Ro. It is possible that the factor structure of the TAS-20-Ro may differ between clinical and nonclinical samples. However, the three factor structure of the English version of the TAS-20 was derived initially with a student sample, and was subsequently replicated in clinical and community samples (8, 19). For the Chinese translation of the TAS- 20, the same three-factor structure was obtained in both student and clinical samples, but a better fit was found in the student sample (12). Nonetheless further research to explore the factor structure of the TAS-20-Ro in a clinical sample is necessary, as replication of the standard three- factor structure would increase generalizability of the scale to the populations that are likely to benefit most from the measure. A second limitation of the current study is the gender imbalance in the Romanian sample, with only 12.8% of the participants being men. This imbalance could potentially affect the factor structure of the TAS-20- Ro, although the three-factor structure has been replicated separately with men and women for the English version of the TAS-20 (19). Future research should explore this more systematically. Further studies are also needed to evaluate the convergent and discriminant validity of the TAS-20- Ro.
Acknowledgements
We would like to give special thanks to some of the people who helped make this project possible: Diana Iacobescu, for her assistance with translation of the TAS-20, Andrei Solomon, for developing the websites used for data collection, and Andrea Szabo for her help with data collection in Romania.
Abbreviations
BBU – Babes Bolyai University
CFA – Confirmatory Factor Analyses
CFI – Comparative Fit Index
DDF – Difficulty Describing Feelings DIF – Difficulty Identifying Feelings EOT – Externally Oriented Thinking IM – Importance of emotions
MIC – Mean Inter-item Correlations
PR – Pragmatic Reasoning
RMSEA – Root-Mean-Square Error of Approximation
SD – Standard Deviation
SPSS – Statistical Package for Social Sciences
TAS-20 – the 20-item Toronto Alexithymia Scale
TAS-20-Ro – the 20-item Toronto Alexithymia Scale, Romanian translation
TLI – Tucker-Lewis Index
WRMR – Weighted Root Mean square Residual WLSMV – Weighted Least Squares Means and Variances