METHODS
The 1970 British Cohort Study (BCS70) is a cohort study that enrolled 16 567 babies born in England, Scotland, and Wales on 5-11 April 1970. Participants were followed up at 5 (n = 13 135, in 1975), 10 (n = 14 875 in1980), 16 (n = 11 622 in1986), 26 (n= 9003, in 1996), 30 (n = 11 261 in 2000) and 34 (n=9656, 2004) years of age. For the surveys in 1975, 1980 and 1986, the cohort was augmented by the inclusion of immigrants to Britain who had also been born in the same week in 1970.Sample sizes for some questions were considerably smaller at age
16 because that sweep coincided with a national teachers’ strike and national school leaving examinations.
The present study uses data from 1975 (i.e. cognitive tests administered at 5 years) and from 1986 (presence or not of certain psychiatric disorders).
The cognitive tests applied at age 5 selected in our analysis are: Copying Designs Test (CDT), Human Figure Drawing (HFD) (Draw-a-Man TEST) and The English Picture Vocabulary Test (EPVT).
Copying Designs Test (CDT) represents a test which assesses constructional abilities and was designed at testing children’s ability to copy designs as a means of assessing their visual-motor coordination (theoretical range: O-8). The Copying Designs Test score was calculated by adding the correct response to each of the 8 designs of the test.
Human Figure Drawing (HFD) (Draw-a-Man TEST). This is also a test evaluating constructional performance and combines perceptual activity, motor response and also has a spatial component. The Human Figure Drawing Test used in the present study was a modified version of the Draw-a-Man Test originally developed by Florence Goodenough and later developed by Dale Harris which permits consideration of children’s concepts of the human figure as an index or sample of their concepts generally, intellectual maturity and it is considered to correlate relatively well with conventional IQ tests (Binet, Wechsler, etc. ) averaging between .4 and .5 , with an theoretical range of 0-30. The drawings produced by the children were scored using an adapted version of the Harris–Goodenough scale, based on 30 developmental items. Human Figure Drawing was calculated using Harris method .
The English Picture Vocabulary Test (EPVT) which is an adaptation by Brimer and Dunn of the American Peabody Picture Vocabulary Test represents a test designed to estimate the vocabulary level (which represent an excellent guide to the general mental ability of intact people and IQ in general) developed as a quick, easy-to- administer test of verbal intelligence for use with children between the ages of two-and-a-half and 18 (theoretical range 0-60). The EPVT raw score is the total number of correct items occurring before the ceiling item (the final item achieved after the child made 5 consecutives mistake).
The resulting distribution of raw EPVT scores was skewed and so the scores were transformed to give a standard normal distribution.
Inter-scorer reliability was .94 for Human Figure Drawing .7 for Copying Designs Test and .96 for EPVT. Intrascorer reliability was .9 or more for all the above tests. The results of each test are expressed both in raw and standardised version.
The above mentioned tests were administered by the health visitor during her visit to the child at home.
Data about teenagers mental health have been obtained from several sources (parental interview about teenagers medical history, direct interview of the teenagers, medical interview did by the medical officer). Data about certain psychiatric disorders have been obtained by medical interviewer (medical officer) from data assembled from files of teenagers and medical history of teenagers obtained from the Parental Interview Form (provided by parents). These data were obtained by putting together all the information (from the sources mentioned above) about children from age 10 (age of previous sweep) to age
16 (age of the next sweep). Corroborating the information from the above sources the medical interviewer had to answer (with “yes”, “no” and “don’t know” this question: “In your opinion is there any evidence of any of the following psychological/ psychiatric problems?”, and the only examples provided were: a) Maladjustment behavioural disturbance, b) Depression, c) Aggression, d) Appetite problems (e g Anorexia, Bulimia etc), e) Psychosis f) Neurosis, g) Suicide attempt/ threats.
Because the “cases” labelled as “Maladjustment behavioural disturbance”, “Aggression”, “Suicide attempt/ threats”, “Appetite problems”appears to be too broad or vague and the number of cases of “Neurosis” (after excluding the comorbidities) was too low, we decided to analyse only the “cases” labelled by us as “Psychotic symptoms” and “Depressive symptoms” (medical officers responded with “yes” to the above question). Because the way of diagnosis wasn’t a standard one, we use the terms “psychotic symptoms” and “depressive symptoms”. However, it might be that in reality, because the medical officers had access to some files too, the diagnostics to be psychosis or depression, but for being conservative we decided to use the expressions “psychotic symptoms” and “depressive symptoms” instead “psychosis” and “depression”.
Table 1 shows the number of teenagers labelled as cases at age 16.

Table 1. Number of teenagers labelled as cases at age 16.
.
From about 5830 valid answers there are a total proportion of 2.7 % cases in sum, the most frequent being depressive symptoms (2.3%) and the number of females’ cases outnumbered the males’ one by about 2 times no matter the diagnosis was.

RESULTS
Because there seems to be a partial overlap between the groups with diagnosis, we separated the above groups into 2 more “pure” groups, using a hierarchical approach with psychotic symptoms first rank followed by depressive symptoms (table 2). In this group as well the number of girls outnumbered by an order of 2 the boys, for the 2 types of psychiatric symptoms analysed.

Table 3 presents the analysis of group (cases versus non-cases), taking into the consideration the above described cognitive tests applied at 5 years. 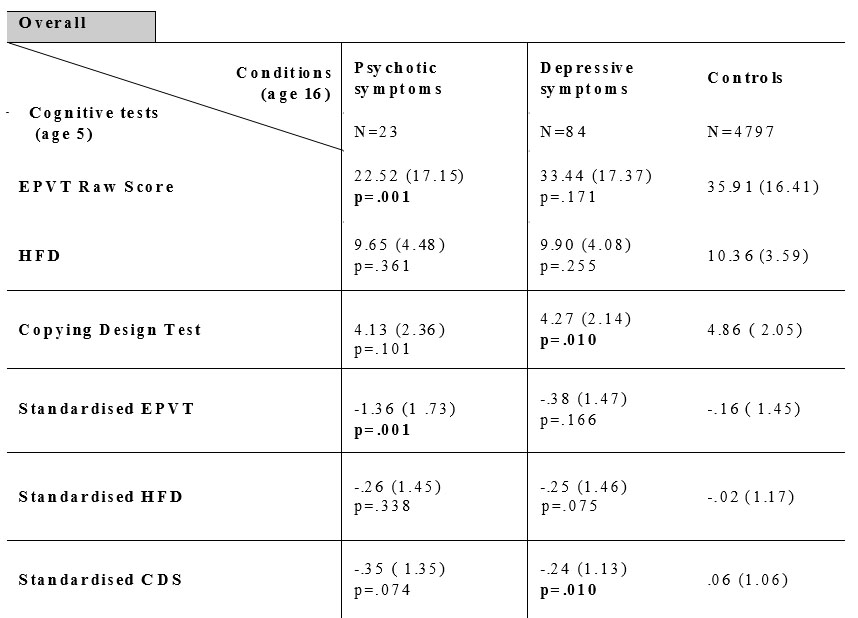 Taable 3. The analysis of group (cases versus non-cases), taking into the consideration the above described cognitive tests applied at 5 years.

DISCUSSION
Our study has some limitations: the relative low number of teenagers diagnosed with psychotic symptoms, the process of gathering the data (from file but also from interviewing the parents, which may be a source of ambiguity) and the diagnosis itself (e.g. “psychotic symptoms” which is a rather large concept).
Our study replicates the well known association between early (age 5) cognitive impairments (for verbal tests- EPVT and visual-coordination test-CDS) and later risk of psychosis (if we consider the psychotic symptoms as a condition on a continuum with psychosis). Our diagnosis being psychotic symptoms it may be that either our cases with psychotic symptoms are destined to be later diagnosed with schizophrenia (or other diseases from schizophrenia’s group: schizo-affective disorder or schizophreniform disorder), other psychotic disorders (e.g. Delusional Disorder and so on) or that earlier cognitive impairment may be later associated with psychosis no matter the diagnosis is (as a concept which cut-crosses various diagnosis). Anyway, we can’t exclude the possibility that some cases labelled as having psychotic symptoms will not develop any mental disorder later. Being that the case it may exists an association between earlier cognitive impairment and later risk of having only transitory psychotic symptoms or a more general proneness to psychosis (clinical or subclinical) for people with low cognitive functioning in childhood. However, we did found these correlations to be significant only in males. This may also suggest that psychotic symptoms (or psychosis in general if there is a continuum between the 2 conditions) in males may be a different (clinical, biological) condition than it is in the case of females or it may be that the type of association between cognitive functioning and psychosis is different in sexes. More interesting, we found a significant connection, also only in male, between later depressive symptoms and childhood (age 5) cognitive impairments (for verbal test- standardised EPVT score, visual-coordination test-CDS and another constructional test-HFD, which is considered also an index of generally concepts). Again, one possible explanation could be the fact that early onset cases of depression in males represent a more severe form of depression or maybe a different form (again, if we assume that depressive symptoms lies on a continuum with depression). However, we can’t exclude the possibility that some of the males’ cases labelled at 16 with depressive symptoms turn out later to be diagnosed with other mental disorder such as schizophrenia or bipolar disorder. And there is also the possibility that earlier cognitive impairment to be associated with later risk for general proneness to later depression (again, clinical or subclinical).
We didn’t see any correlations between childhood cognition and later appearances of psychotic symptoms or depressive symptoms in females. We can conclude that, at least for early onset cases of psychotic symptoms and depressive symptoms, there are some putative biological differences between sexes. 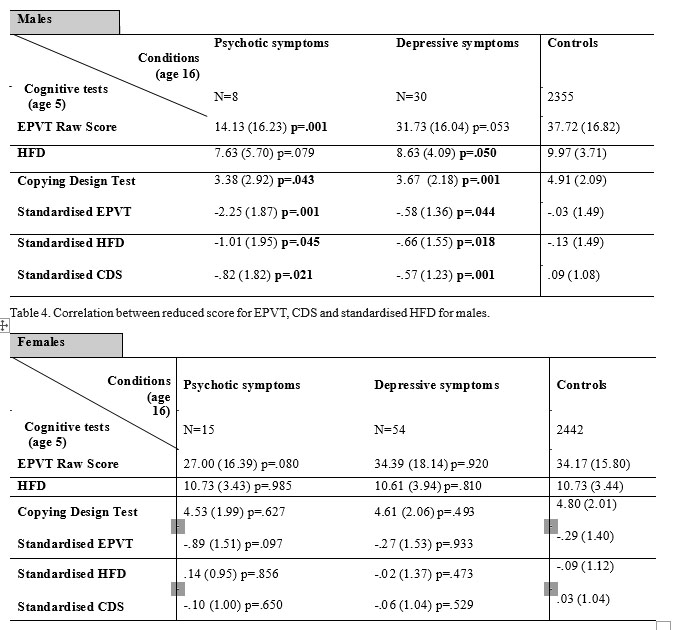 Table 5. Correlation between reduced score for EPVT, CDS and standardised HFD for females.