SOCIAL STRESS IN SCHIZOPHRENIC OUTPATIENTS AND THEIR CAREGIVERS

Schizophrenia represent an important public health problem, with similar clinical symptoms throughout the world, regardless of the social, cultural and economic development of the country or nation. (1) It is posssible to talk about a combination of factors: genetics (50% in families where both parents have schizophrenia, and 60-84% in cases where one of the monozygotic twin was diagnosed with schizophrenia) (2), biochemical (imbalance of dopamine and norepinephrine), biological (pre-and perinatal complications) (3), psychosocial (psychotrauma, limited social support, poverty, disadvantaged social classes, urban residence, migration) (4), the abuse of psychoactive substances (amphetamines and hallucinogens illegal cannabis, alcohol abuse).
Action of the psychosocial factors in the ev o l u ti o n o f s c h i zo p h r e n i a w a s co n f i r me d b y neurobiological and neuroimaging studies, where was highlighted the increasing of glucocorticoid release by the hypothalamic-pituitary-axis which leads to decrease of the hippocampal volume, an important marker of unfavorable evolution of schizophrenia (5). On the other hand, one of the main features of schizophrenia, impaired social function manifested by social isolation, lack of insight and initiative, impaired reasoning and deficiencies in emotional expression, is caused by damage to the prefrontal cortex and reduced structures involved in social cognition (amygdala, superior temporal cortex) (6).
Family has a major importance in this frame, studies about psychotic disorders and schizophrenia highlighting some aspects of family malfunction, especially during the onset of schizophrenia. The family must provide for proper functionality following requirements: problem solving, good communication between its members, affectivity, fulfilling social roles by its members and behavioral control (7, 8).
Enhancement of the risk factors such as conflicts and domestic violence, child abuse, decrease of family support, excessive or decrease of affectivity, substance abuse, daily stress, alienation of traditional familial model and its protective environment, risk behaviors during pregnancy may be risk factors for the occurrence of schizophrenia both in adolescence and later life (9, 10, 11). The high emotional expression in the family, manifested by hostility, criticism, authoritarianism and overinvolving can lead to a significant increase in the rate of relapse in patients with schizophrenia (12).
Cultural differences in the perception of family model and its operation, the level of emotional involvement, control and communication of families in different societies, dissolution or alienation of traditional family models (divorce, children born out of wedlock), changing family structure (increase in single parent families) are contributing to the risks for members of these small social groups, to the possible association between psychiatric disorders and ethnic background, and to the decreased ability of the individual response to the action of stress factors in the development of coping and defense techniques (13).
Direct socio-economic consequences of schizophrenia and psychotic disorders are long periods of absence from work and difficulties in finding and keeping a job, involving high costs both for person suffering from a disorder in this category and for the community. Impairment of social and economic status of a person suffering from schizophrenia is undoubtedly a factor to be taken into account in assessing evolution of the disorder, the link between the disease and the patient’s social characteristics being one with a possible double determination in terms of cause and effect (14).

METHODS
Clinical and sociological retrospective- prospective study of a N=81 patients lot, diagnosed with schizophrenia and hospitalized in Craiova Mental Health Center within 5 years (July 1st, 2007 – June 30th, 2012), included in the research after applying ethical rules regarding informed consent and confidentiality of personal data. Data were processed using Microsoft Excel (Microsoft Corp., Redmond, WA, USA) with XLSTAT suite for MS Excel (Addinsoft SARL, Paris, France).
The sociometric tools used were: Burden of
Disease Assessment Scale (BAS) developed in the early
’90s in the United States to measure objective and subjective consequences of welfare activities for people with severe psychiatric disorders, particularly schizophrenia (15), with a high degree of validity and reliability and an increased sensitivity to changes (16); Involvement Evaluation Questionnaire (IEQ) in schizophrenic patients care, a self-application scale, was designed and tested between 1987-1990 in Netherlands, with the aim of measuring and assessing the consequences of burden and distress caused by the activities of care to the families or caregivers of patients with major psychiatric disorders (schizophrenia and depression) (17, 18) and proved validity, reliability and increased sensitivity (16).

RESULTS
Analysis of socio-demographic characteristics of patients emphasized greater frequency for female patients compared to male patients (59.26% vs. 40.74% ~ 1.5), results which is not in accordance with data from the specialized literature, where the gender distribution is seen as equal (19). Moreover, recent studies stating a higher incidence of schizophrenia in males, with a rate of between 1.31-1.42 (20), the differnece between our data and data from other studies being explained by favorable development of schizophrenia in women compared with men, which allowed admission exclusive in the last 5 years in an ambulatory, and distribution by area of residence, where 85.18% of patients from urban areas.
Distribution of patients by age group shows a mean age of 45.36 ± 8.50 years for patients and a maximum frequency of the disease between 50-54 years (23.45%) and 40-44 years (22.22%), with a clear dominance of females for this age group. Specialized literature (21) highlights the effect of the disease on the social status of schizophrenic patients, the results of our research showing an equal distribution of patients married or involved in a relationship (50.61%) compared to those not involved in life couple (49.39%), by solitude assumed (celibacy, widowhood) or after failure (divorce), this difference being highly statistically significant (p=0.005).
In terms of occupational status, 92.59% of the patients in the study group were retired or socially assisted, these data emphasizing low social support that is provided to these patients by the Romanian society, and the high level of stigma that we suffer them, while regarding educational level of patients prevail graduation from high school (49.38%), and a surprisingly large number of university graduates, seven men and seven women (17.29%), situation that can be explained by the age at which onset of the disease occurred (mean age
25.78 ± 7.38 years) and cognitive impairment associated with schizophrenia (22). The working tools used yielded a great amount of information both on the effects of social factors on patients with schizophrenia and their family members or caregivers, and the consequences of disease social functioning, given the cause-effect duality between schizophrenia and psychosocial elements and stress- vulnerability model of schizophrenia (23).
Burden Assessment Scale (BAS) applied to caregivers emphasized objective and subjective consequences of welfare activities for people with schizophrenia, the average score obtained was 51.22 ± 8.17 corresponding to an intense burden of disease in the context of a standard maximum score of 76, with a minimum score of 34 for our study lot, which is within the standard perception moderate stress induced by care activities, and maximum of 70. 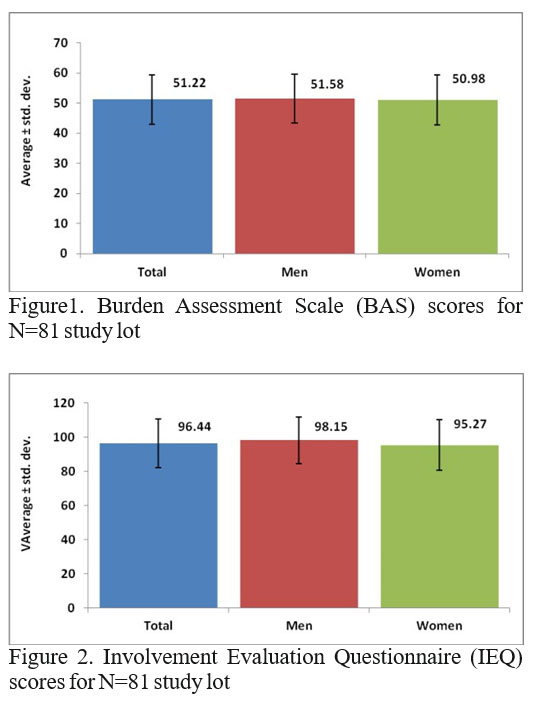 Distress and burden induced by schizophrenia to caregivers was assessed by using the Involvement Evaluation Questionnaire (IEQ), which refers to the effects of the care activities within 4 weeks. The average score obtained 96.44±14.32 is suitable to standard range for close involvement in patient care, the minimum and m a x i m u m s c o r e s ( 6 6 , r e s p e c t i v e l y 1 2 4 ) a l s o corresponding to moderate and intense involvement in activities care. 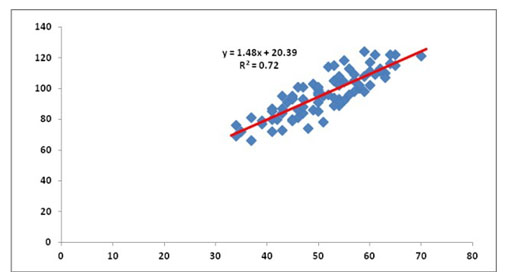 Another significant statistically correlation was evidenced by the regression equation corresponding to the pairs of values found in the study group was BAS=1,48xIEQ+0,72 (Figure 3) with a positive coefficient which indicating that BAS scores tend to be higher for higher IEQ scores, describing thus a vicious circle whose effects spill over on the quality of schizophrenia evolution.
Adaptive deficit was correlated in our research with BAS and IEQ scores, remarking high intensity of burden of disease in caregivers (ANOVA p=0.002) and a higher level of involvement in this activity (ANOVA p=0.002), while the schizophrenic patient manifests social dysfunctions, expressed especially through the relative loss of independence (24).
Hyperprotective family environment dominated by emotional overinvolvement and deficiencies in communication, hostile attitude and overly critical, highlighted in our study group N=81 by the high scores obtained in IEQ and BAS, is also an element that favor relapses and large number of admissions which alter the functionality and social status of the patient. Analysis of the results identified a significant association between the higher average scores obtained and the large number of hospitalizations (ANOVA p=0.003 for BAS scale, ANOVA p=0.001 for IEQ scale). (Table 1) This data underlines the importance of the relationship between patient and family/caregivers in terms of quality of disease’s evolution and social functioning, data confirmed by the specialized literature, where is proposing a set of measures to support the education and care provider to improve coping capacities (25).

Table 1. Correllation between number of admissions and working tools scores

The level of involvement in caring activities (IEQ) of caregivers was an intense one, being significantly influenced by the adaptive deficit of the patients, and the number of hospitalizations, while the burden of disease, assessed through BAS, considered as an expression of the negative social influence and stigmatization, was significantly correlated with the adaptive deficit, frequent relapses, and poor quality of remission. Statistical significance of the data obtained confirms the importance of social factors in the evolution of schizophrenia risk. For the clinician is important to monitorize the level of social disability (social cognition deficit), the presence and intensity of social stress (acute and chronic forms) both for the patient and the caregivers, the effects of stigma and of high emotional attitude in patient’s family in order to optimize therapeutic strategies.