DEPRESSION, MORBIDITY AND MORTALITY IN PATIENTS WITH CARDIOVASCULAR DISEASES

A study carried out by the World Health Organization, World Bank and Harvard University concluded that, ever since 1990, depression is the fourth disease cause worldwide (1, 4). Depression has been designated by WHO in 2001 as a worldwide chronic disease, with the potential to become the leading cause of morbidity by 2020 (1).

Cardiovascular diseases represent 48% of all deaths in Europe, with coronary artery disease as the most common cause (1 in 5 deaths) (2).

MATERIALS AND METHODS
I. General:
The study was conducted in the Cardiology Department of Colentina Clinical Hospital, Bucharest. Hospitalized patients were identified for psychiatrical evaluation by consulting the observation sheets and by the reference from the cardiologists. Those who were assessed were informed about the following study and signed a consent form. Patients were psychiatrically evaluated and diagnosed conform with DSM-IV and ICD-
10. In addition patients completed the self-assessment Beck Depression questionnaire (Beck Depression Inventory, BDI). For patients who meet the diagnosis of depressive disorder according to DSM-IV criteria (Diagnostic and Statistical Manual of Mental Disorders, Fourth Edition) and ICD-10 criteria (The ICD-10
Classification of Mental and Behavioural Disorders), to a s s e s s t h e s e v e r i t y o f d e p r e s s i o n , I u s e d : M o n t g o m e r y – A s b e rg D e p r e s s i o n R a t i n g S c a l e (MADRS), Hamilton Depression Scale with 17 items (HAM-D) and Hamilton Anxiety Scale with 14 items (HAM-A). Cardiological assessment was done by the cardiologist and included: physical examination, laboratory tests (blood count, biochemistry, electrolytes, inflammatory markers – fibrinogen, erythrocyte sedimentation rate – ESR, C-Reactive Protein, markers of markers of heart failure – NTpro-BNP), electrocardiogram (ECG), echocardiography (especially evolution of the left ventricle ejection fraction, EF%).
The patients were selected by considering inclusion and exclusion criteria.
II. Inclusion criteria:
– Subjects (adults of both sexes) aged over 18
– Patients with acute coronary syndrome (acute MI or unstable angina who were hospitalized), stable angina, heart failure or arrhythmias.
III. Exclusion criteria:
1.Cardiovascular. Exclusion criteria were: (a) heart surgery scheduled anytime in the next 6 months (b) current episode of unstable angina or MI in more than three months after surgery for aorto – coronary bypass (CABG).
2.Medical otherwise. Other exclusion criteria were medical: (a) viral, bacterial, parasitic infections that can independently increase inflammatory markers, (b) type I or II diabetes uncontrolled or newly diagnosed (c) significant renal or hepatic dysfunction or other serious extracardiac diseases, (d) pregnant or within 4 weeks post partum.
3.Psychiatry. Were excluded from study patients with:
(a) abuse or dependence on alcohol or drugs in last 6 months,
(b) psychotic symptoms, history of psychotic disorder,
(c) psihoorganic syndrome, dementia (Mini-Mental State Examination score, MMSE < 23),
(d) a significant suicide risk.
IV. Study design:
The study is prospective, observational and analytical.
Patients who met inclusion criteria were followed for a period of one year after enrollment and had four study visits: at baseline, 3 months, 6 months and 1 year. Hospitalized patients were identified for psychiatrical evaluation by consulting the observation sheets and by the reference from the cardiologists. There were also recorded (from patient and relatives), personal data (marital status, education level and profession), informations about the history of the patients: family history, history of cardiovascular disease and where there was possible, information about the onset and history of depressive symptoms (in most of the cases, the diagnosis of depressive disorder was established at the inclusion in the study).
At baseline and at each study visit patients had psychiatric examination (conform with DSM-IV, ICD-10) and assessment of depression was made with scales: BDI, MADRS, HAM-D, HAM-A) and clinical and paraclinical c a r d i o l o g i c a l e x a m i n a t i o n ( l a b o r a t o r y, E C G , echocardiography). Control group (cardio-vascular patients without depression) had the same examinations. The group of patients with cardiovascular disease and depression was compared with the group of patients with cardiovascular disease without depression, in terms of tracking parameters and their evolution.
Study design allowed application of scales in a single study visit. Design and methodology of the study was conceived so to be achieved relative easy in terms of logistics of the study, trying to maintain an adequate scientific level.
V. Statistical analyses:
Survival curves were generated by the Kaplan-Meier 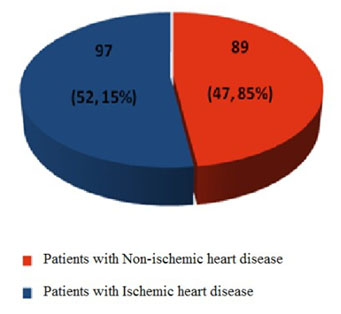 Figure 1. The repartition of the patients taken into the study depending of the type of cardio-vascular disease.

Further it was performed the screening of all patients for depression. Out of the 186 patients , 110 (54,19%) suffered from depression (Figure 2). 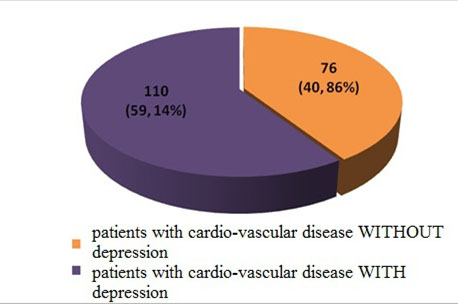 Figure 2. Distribution of the patients according to the the results of the screeening for depression
There were 24 (12,9%) deaths during the follow-up (365 days). The deaths occurred at the patients with cardiovascular disease and depression. 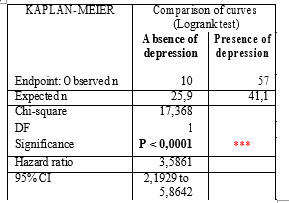 Figure 3. Cumulativ proportion of new cardiac events in ischemic patients and in non-ischemic patients based on the presence of depression over total follow-up period, using Kaplan–Meier curves 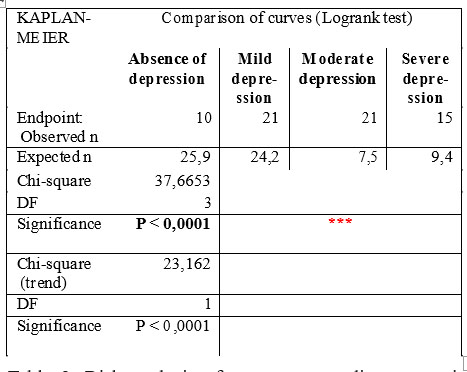 In our study the risk of new cardiac events were 3,5861 fold higher for the patients with depression (HR:
3,5861, Confidence Interval (CI) : 2,1929 to 5,8642), comparing with those without depression.
The results of our study are concordant with the results of the international studies.
Multiple studies conclude that in patients with known cardiac disease, depressive disorder is responsible for an increase of approximately 3-4 fold the risk of cardiovascular mortality (6, 11, 12, 13, 14).
In a meta-analysis of 20 studies from 2004, Barth J et al. concluded that depressive symptoms increases mortality risk 2.24 times at two years in patients with coronary heart disease, even after adjustment for other risk factors, but without significant effect in the first 6 months of follow up (23). Study of Fresure-Smith et al. showed that depression diagnosed during hospitalization for myocardial infarction is a negative prognostic factor, both at 6 months and 18 months, independent of other consecrated prognostic factors (24).
Also, in patients with heart failure, depression is associated with health status decline and increased rates of rehospitalization and mortality (25).
A separate analysis by Frasure-Smith and colleagues, showed that depression predicts long-term cardiovascular mortality in patients with atrial fibrillation and congestive heart failure with ejection fraction less than or equal to 35%. Depression significantly increased cardiovascular mortality (hazard ratio [HR], 1.57), arrhythmic death (HR, 1.69), and total mortality (HR, 1.38) within a follow-up of 39 months despite an optimized treatment and control for other prognostic indicators (26).
Regarding the severity of depression and the risk of new cardiac events, in our study, most of the new cardiac events appear at the patients with moderate severity of depression.
According to Bush DE et al., even minimal symptoms of depression increase mortality risk after acute myocardial infarction (13).
From all the 24 deaths that were observed in our study, most of them (9 patients – 37, 50 %) appeared at 90 days of follow-up. In a substudy of the OPTIMIZE-HF Hospitalized Patients With Heart Failure) trial, patients with depression were more likely to have a longer hospital stay and higher 60- to 90-day postdischarge mortality (27).
Depression also has been shown to be a risk factor for recurrence of atrial fibrillation. Symptoms of depression significantly predicted recurrence of abnormal cardiac rhythm by 2 months of follow-up in patients with atrial fibrillation / atrial flutter who had been successfully cardioverted. This result was postulated to be due to a heightened adrenergic tone and a proinflammatory state (28).