According to NICE clinical guideline, depression refers to a wide range of mental health problems characterized mainly by low mood (a loss of interest and enjoyment in ordinary things and experiences) and specific emotional cognitive, physical and behavioral symptoms (1). Depression is a frequently observed and reported symptom in patients with schizophrenia (2, 3). Depression syndrome in schizophrenia varies in prevalence between 7% to 78%, with an average around 25% (4-7).
Although it was believed from earlier psychiatrists (Bleuler -trans Zinkin, 1950), Mayer-Gross (1920) and Claude (1924) cited by (8)) that proeminent affective symptoms may be a factor of good prognosis in schizophrenia, evidences from recent researches show quite the contrary, meaning that depressive symptoms besides adding to the risk of committing suicide (9) have also a negative effect on prognosis (more frequent relapses) (10) and on psychosocial adjustment (11). However this discussion is not yet solved, depression is associated by some contemporary researchers with a favourable outcome (12) but also with a negative one (13) including increased risk of suicide and relapse (14). Depressive symptoms have been reported both before and concomitant with suicidal thinking (9).
Birchwood (2000) considers that depressive syndrome in schizophrenia could be explained by a biological process mediating both affective symptoms and acute phase symptoms, or it may be an epiphenomenon (15). The onset of depression syndrome in schizophrenia may or may not be associated with symptoms of acute phase of schizophrenia; it may occur as post-psychotic depression several months after recovery of an acute episode (16). It is not clear and definitely it is an understudied issue if depressive symptoms in different schizophrenia’s phases represent various phenomenons or not. If that were the case, the treatment would be different according with characteristic phase.
Conclusions of studies regarding first episode schizophrenia are that depression is an important syndrome during both initial acute phase and also during the first year of illness (17). Thus, early recognition and treatment of depression in patients with first-episode schizophrenia, who also have a high relative risk of suicide, requires special attention.
Studies regarding prognosis in chronic schizophrenia (18) showed that four predictors are important both on individual and global outcome: acquisition of skills, family history of schizophrenia, erosion of reality testing (psychotic assaultiveness) and depressed mood. However studies regarding predictive load of depressed mood in first episode psychosis are scarce, thus the need for reporting correlates of depression in this population and for testing predictive models is still present.
EUFEST study has brought important information regarding efficacy of antipsychotics in treatment of schizophrenia, but also it has a merit to have analysed an important pool of patients with first episode schizophrenia, which have a high prevalence of depression. The purpose of EUFEST study (19) was to compare the effectiveness of atypical antipsychotics with low doses of typical neuroleptics.
The purpose of our paper is to evaluate the prevalence and the correlates of depression of schizophrenic first episode patients. Also our study looked into the 12-months outcome of initial depressed patient. The correlates of depressed patients were socio- demographic and psychopathologic, including positive and negative symptoms and cognitive functioning.

METHODS AND MATERIALS
European First Episode Schizophrenia Trial study (20) has been designed to compare the effectiveness of atypical antipsychotics (amisulpride 200–800 mg/d, olanzapine 5–20 mg/d, quetiapine 200–750 mg/d, ziprasidone 40–160 mg/d) with low doses of typical neuroleptics (haloperidol 1–4 mg/d). Effectiveness in EUFEST was equivalent with retention of patients on treatment, defined as the time to discontinuation of the study drug to which patients were originally randomized, within the study dose range, and without the addition of other antipsychotic drugs.
EUFEST trial design was multicentric (50 centres participated in 13 European countries and Israel). Inclusion criteria were: 18– 40 years of age and DSM- IV criteria for schizophrenia, schizophreniform, or schizoaffective disorder confirmed by the Mini International Neuropsychiatric Interview Plus, first episode of disease with no more than 2 years elapsed between the onset of positive symptoms and recruitment into the trial and previous use of antipsychotic drugs of less than 2 weeks during the preceding year and less than 6 weeks lifetime.
The investigators invited eligible patients to participate after providing information orally and in writing about the trial.
After complete description of the study to the subjects, written informed consent was obtained. The trial complied with the Declaration of Helsinki and was approved by the ethics committees of the participating centres.
Exclusion criteria in this study were: 1) more than 2 years had passed since the onset of positive symptoms; 2) any antipsychotic had been used exceeding 2 weeks in the previous year or 6 weeks lifetime; 3) patients had a known intolerance to one of the study drugs; and 4) patients met any of the contraindications for any of the study drugs as mentioned in the (local) package insert texts.
Baseline data were obtained between 4 weeks before and 1 week after randomization on demographics, diagnoses, current medication, psychopathology (Positive and Negative Syndrome Scale – PANSS), severity of illness (clinical global impression – CGI), overall psychosocial functioning (global assessment of functioning scale – GAF), extrapyramidal symptoms (St Hans rating scale – SHRS), depression (Calgary Depression Schizophrenia Scale – CDSS), and neurocognitive performance (six measures: Trail Making A (time), Flexibility Index (Trail Making B–A time), Wechsler Adult Intelligence Scale Digit-symbol Coding (total correct), Purdue pegboard (total pegs with dominant hand), Rey Auditory Verbal Learning Test – learning index (total correct on trials I–V), and Rey Auditory Verbal Learning Test – secondary memory (total correct on Delayed Recall trial), quality of life (Manchester Short Assessment of Quality of Life – MANSA).
Baseline, 1, 2, 3, 6, 9, and 12 months assessments for all scales had been performed. Data about quality of life were evaluated at baseline, month 3 and end of study (month 12).
In this article we used ‘schizophrenia’ as the term for schizophrenia, schizophreniform and schizoaffective disorder.
Data analyzed in this paper represent a secondary analyse of Romanian patients. The purpose was to evaluate the prevalence and the correlates of depression of schizophrenic first episode patients. Also our study looked into the outcome of initial depressed patient compared with non-depressed first episode schizophrenic patients.
The correlates of depressed patients were socio demographic and psychopathologic.
Depression was measured by the Calgary Depression Scale for Schizophrenia – CDSS scale (21) which is considered the most reliable instrument for assessing depressive symptoms in patients with schizophrenia (22, 23). The scale has been developed specifically to assess depression independently of negative or extrapyramidal symptoms. The cut-off score for major depressive disorder is >/= 6 on CDSS scale as proposed by the author Addington et al (2011) (24).
Data were analysed with standard descriptive function, chi square function for categorical data and t-test for continuous data. CDSS was dichotomized into the categories non- depressed (<6) versus depressed (≥ 6).
Data about duration in treatment were analysed with Cox regression function. All analyses were performed using SPSS 16.

RESULTS
Data were available for 111 patients. From this 35 (31.5%) met the criteria for depression.
Sociodemographic data about the 2 groups (depressed vs. non-depressed) are presented in table 1. 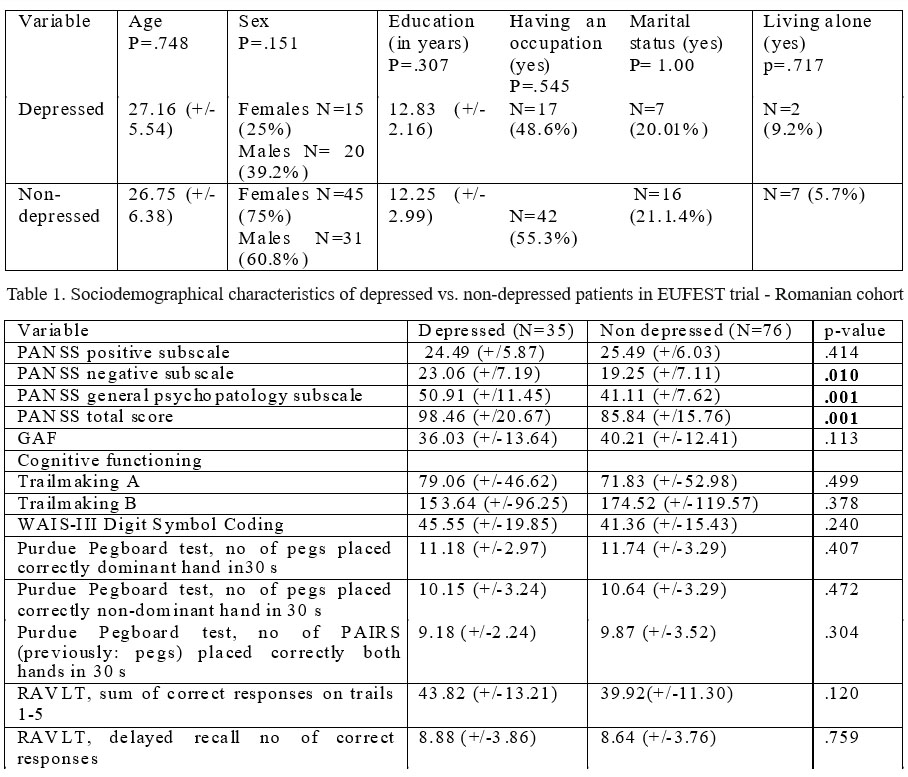 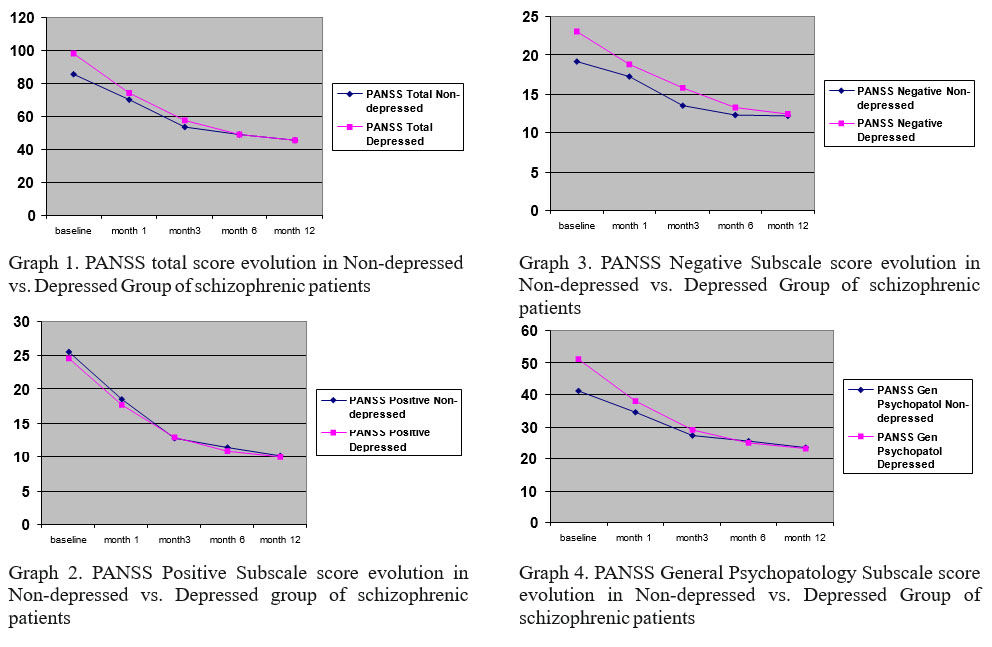 There are no differences between the 2 groups regarding total PANSS score, or any PANSS subscale or functionality (as measured by GAF scale).
We analyzed the evolution of depression with chi square function, looking at the proportion of depressed patient on each single visit.
Data are presented in graphic and table 5 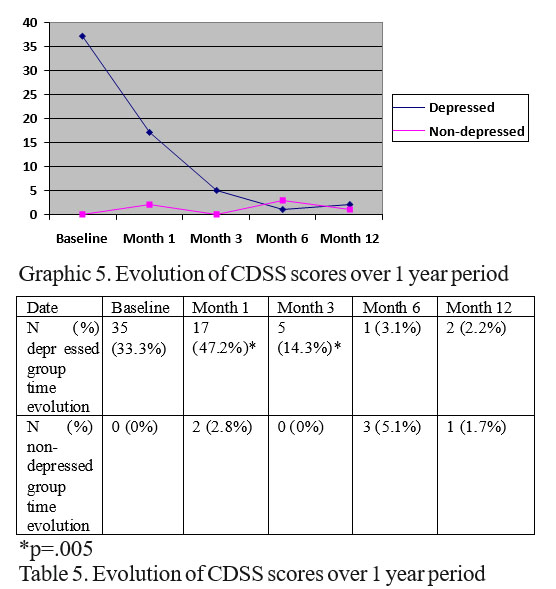 The prevalence of depressive symptoms in FES patients at baseline is 31.5% and drops to 6.25% at the end of the study (1-year), prevalence close to what found in other studies – Mulholland and Cooper review of literature presented a prevalence of major depressive episode in more than half in FES and drug-free patients which will drop towards 25% in 6 months (8). Similar to other studies, the present one found a close association between depression and first episode schizophrenia, which may suggest that schizophrenia and depression symptoms share a similar pathophysiological process (25). In fact, according with a dimensional view of schizophrenia, depression may be part of schizophrenia (26) and we can speculate that depression in schizophrenia might well be a different condition from depression which is part of affective spectrum, even if they share common features. One important argument in favour of this statement is the fact that depression symptoms in our cohort of patients recede fast after the initiation of antipsychotic medication- there are no differences at 1 month between the 2 groups, and basically all the depressed patients improved without antidepressant treatment. One can conceptualise the relationships between depressive symptoms in schizophrenic patients such as:
-depression as a dimension of schizophrenia
-comorbidity between depression and schizophrenia
-schizophrenia as a risk factor for depression
Obviously all the above are not mutually exclusive and other relationships are conceivable. However it would be quite difficult to predict just from clinical observation in which particular state a patient is. This is not a trivial question because deciding what the particular condition of the patient is, will decisively influence the clinical management of individual patients. It is possible that some schizophrenic people will have theirs’ depressive s y m p t o m s i m p r o v e d o n l y o n t r e a t m e n t w i t h antipsychotics while others will need an antidepressant and an antipsychotic. Moreover it may be that in different period of illness course different therapeutic intervention may be useful. Our results are obtained only on first episode patients and therefore cannot be extrapolated to all schizophrenic patients. However, more studies are needed in order to answer that important question.
The fact that we did not find any significant a s s o c i a t i o n b e t w e e n d e p r e s s e d s t a t u s a n d sociodemographical characteristics studied in EUFEST trial: gender, years of education, being married, having an occupation, living alone, could also indicate that, at least in the case of first episode patients with depressive symptoms, depression represents a different condition from the depression which characterises affective d i s o r d e r s , b e c a u s e t h e a b o v e m e n t i o n e d sociodemographic items represent risk factor for depression in affective disorder but did not occurred as risk factors in our study. The fact that depression in our cohort of depressed patients improved on antipsychotic treatment and did not required antidepressant treatment again suggests that depressive symptoms in first episode schizophrenia may well be a different condition from depression in affective disorders.
Regarding psychopathology (negative, positive and general symptoms), we have found statistically significant differences only at the moment of entering the study. It is quite possible that negative symptoms subscale and general symptoms subscale to measure some overlapping psychopathological dimensions with depression as measured with CDSS and therefore the correlation to be rather circular despite the fact that CDSS is special tailored to measure depression in schizophrenic people and we cannot absolutely exclude this possibility, even if remote. The fast improvement of depression symptoms secondary to improvement of psychosis without using an antidepressant suggests that depressive symptoms present in naive first episode schizophrenic patients may simply represent epiphenomena of more important positive, negative or cognitive symptoms. Again, if replicated, these data indicate that it may be a good idea in the treatment of depressive symptoms of first episode schizophrenia patients not to initiate immediately an antidepressant trial. Obviously there are too few data to make any clinical suggestions in this stage.
In conclusion depressive symptoms severe enough to qualify for a depressive episode represent 31.5% of the cases in first episode schizophrenia patients

(FES) in the Romanian cohort of EUFEST study. At the beginning of the study depressed schizophrenic patients present more severe negative and general symptoms as evaluated with PANSS scale. Depressed patients improved very fast and at 1 month there are no differences between the 2 groups. The 1-year clinical outcome and retention in treatment of patients with FES and depression did not differ significantly from those without depression.