A NEW INSTRUMENT FOR ASSESSMENT OF MILD NEUROCOGNITIVE DISORDER

The diagnostic features of mild NCD in DSM-5 are: modest cognitive decline from a previous level of performance in one or more cognitive domains, based on
1: concern of the individual informant, or clinician and 2: a modest impairment in cognitive performance, preferably documented by standardized neuropsychological testing. As additional criteria, cognitive deficits are not better explained by another mental disorder and are not accompanied by dependence in activities of daily living. There are numerous etiologies responsible for mild NCD: Alzheimer’s disease, frontotemporal lobar degeneration, Lewy body disease, vascular disease, traumatic brain injury, substance/medication use, HIV infection, prion disease, Parkinson’s disease, Huntington’s disease, other medical conditions (4).
DSM-5 gives also a detailed presentation of cognitive processes from each cognitive domain, with examples of symptoms or observations and specific assessments. There are six cognitive domains: complex attention, executive function, learning and memory, language, perceptual-motor and social cognition. Cognitive domains cover several cognitive processes, that represents the components of the cognitive functioning in a particular area. By example, learning and memory domain covers the following cognitive processes: immediate memory, recent memory, very-long-term memory and procedural learning. Each cognitive domain can present a non homogenous impairment of specific cognitive processes, according to etiology and to the stage of mild or major NCD. Therefore, choosing the cognitive processes and the appropriate difficulty level of assessment are important issues in the construction of a test for assessment of mild NCD.
Neuropsychological assessment is one of the methods to assess the cognitive decline, in addition to history of cognitive complaints. DSM-5 defines the cut- offs of neuropsychological test performances: mild NCD between 1st and 2nd standard deviation and major NCD
below the 2nd standard deviation of the assessments (4).
Anyway, brief instruments for assessment of mild neurocognitive disorder suitable for assessment of corresponding impaired cognitive processes and using the cut-offs described in DSM-5 are also still lacking.

MATERIALS AND METHODS Test development
We developed a pencil and paper test battery for assessment of mild NCD starting from the cognitive domains described in DSM-5. For the construction of the test, we selected the cognitive domains of attention, memory, executive functions, language and perceptual- motor. We did not selected social cognition because this type of impairment is less encountered and assessments of this domain are more time consuming. For each cognitive domain several cognitive processes, corresponding assessments and scoring algorithm were selected by one of the authors (MVZ) based on and several criteria: impairment of cognitive processes is specific to mild NCD, ability of assessments to predict conversion to major NCD, difficulty level of assessment suited for mild NCD and short duration of administration. The authors used a scoring algorithm aimed to reflect DSM-5 conceptualization of three levels of cognitive functioning: normal, mild NCD and major NCD. The purpose of the test was to represent a short battery for screening of mild NCD and also for assessing cognitive processes impaired in mild NCD. The test was named Mild Mental Changes Assessment Test (MIX Test).
The following assessments were selected for the construction of this test battery, based on previous data in the literature regarding neuropsychological assessments diagnostic for mild NCD (5-10):
-memory:
12 words list learning, 3 early recalls, one delayed recall; The administration speed was 1word/1,5s; each
administration was followed by an early recall trial of 30s.
There were three consecutive learning-early recall trials;
10 minutes after the last learning trial a delayed recall trial of 60s was administered. We calculated 2 scores: total early recall for the 3 trials (total correct early recall items minus total early recall intrusions) and total delayed recall (correct delayed recall items minus delayed recall intrusions). We did not counted repetitions (neither correct repetitions nor repetitions of intrusions). The 12 words included in the list were: chair, rabbit, prune, screwdriver, ballerina, T-shirt, building, lake, mathematics, gold, tomato, ant.
-attention:
s y m b o l – d i g i t s u b s t i t u t i o n – n u m b e r o f c o r r e c t substitutions during 1 minute (9 symbol-digit pairs on top of page (Figure 1), substitution lines with 15 symbols/line, 5 items for one trial at the beginning of the assessment); patients made the substitutions orally; we chose oral modality of administration because it allows to test for patients with sequelae of stroke;

MIX test was applied to 24 patients diagnosed with mild neurocognitive disorder or with other disorders known to present with intensities of cognitive impairment c o m p a r a b l e t o m i l d n e u r o c o g n i t i v e d i s o r d e r : schizophrenia – 6, post-stroke – 6, mild NCD – 4, major depressive disorder of moderate intensity – 4, bipolar disorder – 2, diabetes mellitus – 2; and to 30 healthy controls (with no condition known to present with high risk for cognitive impairment). We will refer to the first group as “group at risk” because in this group predominate patients diagnosed with disorders that present high prevalences of cognitive impairment at intensities comparable to mild neurocognitive disorder, but not formally diagnosed with cognitive impairment.
Patients were selected between June and November 2013 from Obregia Clinical Psychiatry Hospital – Bucharest and Ana Aslan National Institute of Gerontology and Geriatrics – Bucharest. We excluded subjects with MMSE<26, ≤8years of education or unable to do the test due to sensorial or motor impairments. All patients in the group at risk (except patients with major depressive disorder) were chronic and stable. For diagnosis of mental disorders DSM-5 criteria were used. The study had approval of the ethics councils of the two institutions and the subjects gave written consent.

Statistics
To compare scores of the two groups we used T test for independent samples for means comparison and Mann-Whitney test for distributions comparison. To test for normal distribution of data we used Shapiro-Wilk Test of Normality. 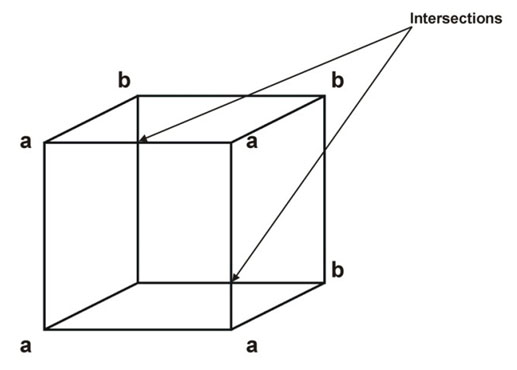 Figure 3. Cube copying. The two intersections and squares aaaa and bbbb are one of the items used for interpretation.

MIX test scoring algorithm
Each of the domains of memory, attention, visuo- motor abilities and language were granted 6 points and executive functions 9 points (due to higher number of cognitive processes involved in executive functions). Results were scored categorically for sentence repetition and inhibition (1: correct, 0: incorrect). Space and time orientation, digit span backward, clock drawing – hands positioning, clock drawing – numbers positioning and cube copying (Figure 3) were scored based on predetermined algorithms (Tabel 1).
For the other assessments we obtained raw scores such as described in the Materials and Methods section of the article. We then used raw scores to develop a scoring algorithm based on the mean and standard deviation of each task of the control group. As a general rule, we followed DSM-5 recommendations regarding the cut-off of 1-2SD for mild NCD and <2SD for major NCD. 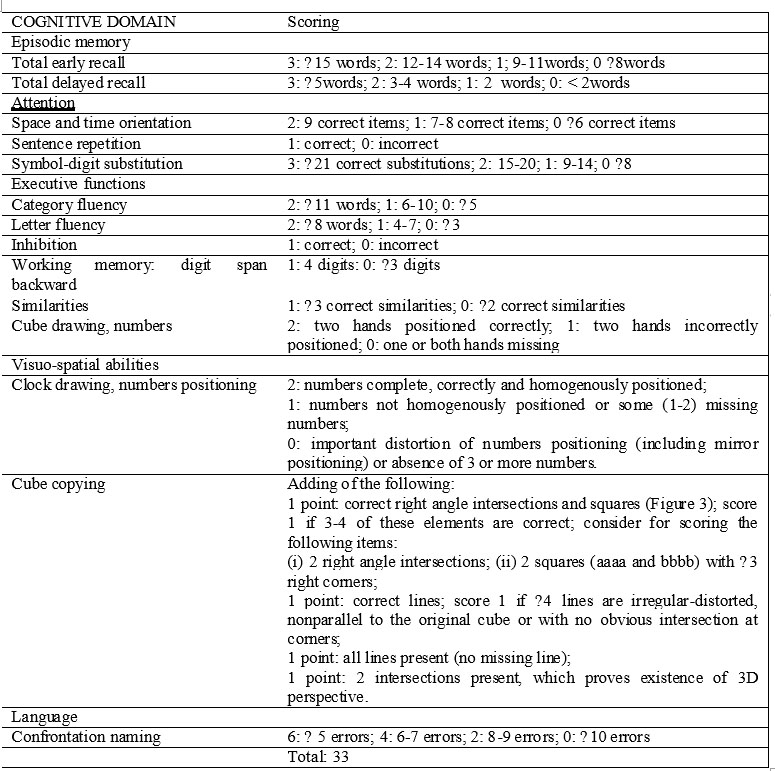 The test has a wide representation of cognitive processes in five cognitive domains: memory, attention, executive functions, visuo-spatial perception and language, and assessments are constructed for a level of impairment specific to mild NCD. The broad coverage of cognitive processes make the test suitable for use in a variety of disorders associated with a mild level of cognitive impairment. There is an important presence of executive function processes in the MIX test, which make it suitable for patients with mild vascular cognitive impairment, as recommended by guidelines (5). The broad representation of cognitive processes makes also the test suitable for assessments of other disorders that produce mild NCD. However, a future discriminative analysis is needed to establish the presumed correspondence between assessments and cognitive processes. The low number of subjects in the control group and the heterogeneity of subjects in the group at risk are not appropriate for such analysis.
The brevity of administration (about 15 minutes) make the test useful for screening of mild NCD in clinical practice. The tasks composing the test have proven to be predictive of conversion of mild NCD to major NCD (delayed recognition (8, 9), processing speed (8), executive functions (8,10)) which might make the test a useful instrument for prognosis.
Similar instruments for screening of mild NCD exists in use. MOCA (11) is a briefer instrument (10 minutes), but has a lower representation of executive functions in comparison to MIX. Also, in comparison to MoCA, MIX contains tasks that proved to be predictive for conversion to major NCD: 12 memory list with 3 learning trials and one delayed recall, and a symbol-digit substitution test. ACE-R (12) and DemTECT (13) are also useful instruments to screen for mild NCD, but they have been developed for screening of dementia and hence the level of difficulty is not best suited for mild NCD. Other screening instruments for mild NCD contains few cognitive processes assessments -ABCS (14), Chinese Abbreviated Mild Cognitive Impairment Test (15), M@T (16), Montpellier screen (17)- or take too much time for administration -FMLL mini-battery (18), CAB (19). MIX test might present some advantages, because it covers a large number of cognitive processes, contains tasks proved to be predictive of conversion to major NCD and its administration is quite short.

CONCLUSION
In conclusion, MIX test is able to differentiate between two groups of normal subjects and patients at risk for cognitive impairment. The test is a promising tool for assessment of mild neurocognitive disorder and of specific impaired cognitive processes. Future studies are needed to establish the diagnostic and psychometric performances of the test.

ACKNOWLEDGEMENT: This paper is supported by the Sectoral Operational Programme Human Resources Development (SOP HRD) 2007-2013, financed from the European Social Fund and by the Romanian Government under the contract number POSDRU/107/1.5/S/82839.