IRRITABILITY AND PERSONALITY TRAITS AS SUICIDE RISK FACTORS IN DEPRESSION

Suicide is one of the main psychiatric emergencies and an important public health problem in most countries around the world (1). The evaluation of suicide risk is one of the core competencies a psychiatrist has to develop during his training and professional life. This evaluation is a complex problem, which involves assessing and integrating numerous risk factors. To date there is no clinical or biological instrument that can accurately predict suicide.

The presence of mental illness is one of the most important factors that increase suicide risk, being present in 90% of all suicides (2). Studies have shown that two thirds of these suicides associated with mental illness are associated with depression. Nevertheless, the great majority of people who suffer from a mental illness do not kill themselves and do not even attempt suicide. This fact led Mann et al to propose, in 1999, a diathesis model. This model comprises of two facets of the suicidal patient: a tendency to experience more suicidal ideation and a tendency to be more impulsive, therefore more likely to act on suicidal thoughts and feelings (3). Thus, these authors are among the first to raise awareness to the importance of impulsivity as a predictor of suicidal behavior. Since then there have been many studies that have taken into account impulsivity as a factor in suicide risk.
Also, completed suicide is up to three times more frequent among men, although there are more attempted suicides among women (4). This is due, at least in part, to the fact that men tend to use more lethal means in hurting themselves. For this reason the present research focuses on the suicide risk of men with depressive episodes.

Suicide risk and impulsivity have also been connected to aggression. This is both due to the fact that suicide is viewed as aggression turned inwards and to the fact that all three of these factors have been linked to serotonin regulation abnormalities (5, 6, 7).
Therefore this study aims to study the link between suicide risk and trait impulsivity and trait aggression. Another hypothesis we want to test is that the degree of irritability developed during a depressive episode is related to the overall aggression and impulsivity of the individual and whether this symptom is relevant in the evaluation of suicide risk. Also we aim to evaluate the importance of low tolerance to frustration for the suicide risk of a depressive episode.

This study included a cohort of 103 male
inpatients. It was conducted in the 3rd Department of “Prof. Dr. Al. Obregia” Clinical Hospital of Psychiatry in Bucharest, over a period of two years. Patients with a diagnosis of Depressive Episode were included, regardless of the type of mood disorder diagnosed – unipolar depression, bipolar disorder or depressive disorder due to a general medical condition. Comorbidity (either psychiatric or somatic) was not a criteria for exclusion from the study. DSM IV-TR criteria were used to diagnose the depressive episode. As an independent outcome variable for the evaluation of suicide risk we used the type of hospitalization (either voluntary or involuntary). The involuntary hospitalization was determined by a commission composed of three professionals, according to the Romanian Mental Health Law. The study included only those patients with depressive episodes for whom the involuntary hospitalization was decided on the basis of suicide risk.
Each patient was interviewed upon admission and they also completed two self-administered questionnaires: the Barratt Impulsiveness Scale (BIS) and the Brief Aggression Questionnaire (BAQ).
BIS is a self-administered questionnaire consisting of 30 Likert-type items scored from 1 (rarely/never) to 4 (almost always/always) that evaluates overall impulsiveness. It contains several subscales that score attentional impulsiveness (attention and cognitive i n s t a b i l i t y ) , m o t o r i m p u l s i v e n e s s ( m o t o r a n d perseverance) and lack of planning (self-control and cognitive complexity).
The BAQ is a self-administered questionnaire derived from the Aggression Questionnaire developed by Buss and Perry in 1992. It consists of 12 Likert-type items scored from 1 (extremely uncharacteristic of me) to 7 (extremely characteristic of me). The BAQ evaluates overall aggression as a sum of four categories: physical aggression, verbal aggression, anger and hostility.
The Hamilton Depression Rating Scale (HAMD-17) and the Clinical Global Impression Severity Scale (CGIs) were used to confirm the presence of a depressive episode and to evaluate its severity.
The data was analyzed using SPSS 16.0 and Microsoft Office Excel. As the tested variables were ordinal, non-parametric tests were performed.

Fig. 1. Distribution of the types of admission in the studied sample. 56 patients were voluntarily hospitalized, while 47 were hospitalized on a involuntary basis. 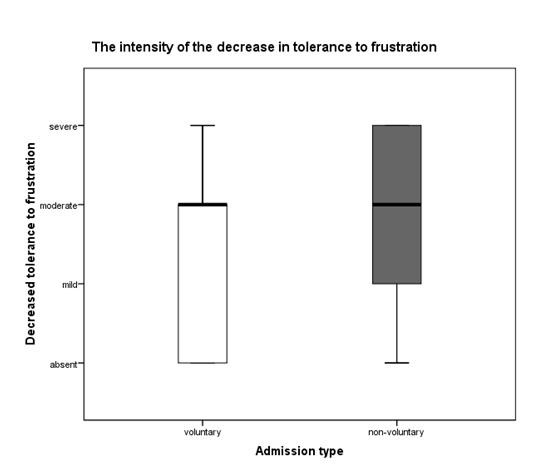 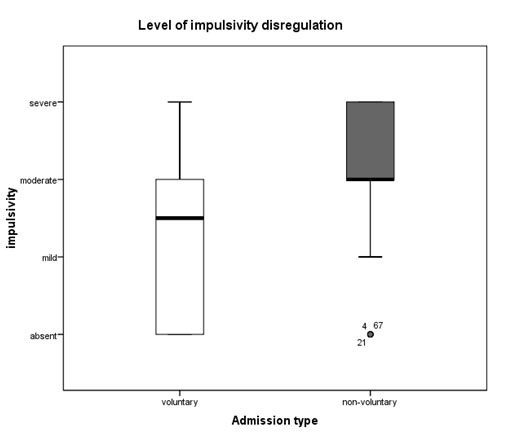 Fig. 5. Boxplots of the distribution of the impulsivity scores in the involuntary (n1=47) and voluntary(n2=56) admittance groups (p<0.001) 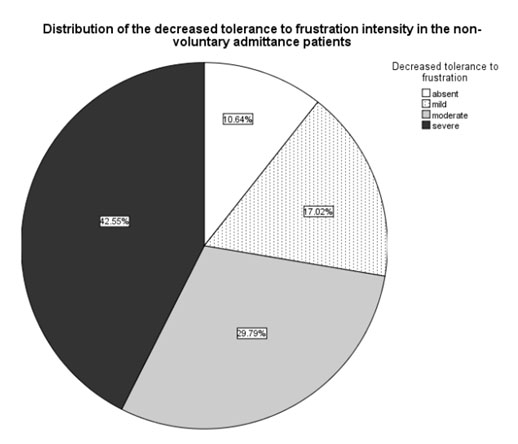 Fig. 3. Prevalence of specific low tolerance to frustration scores in the patients with involuntary (n1=47) admission 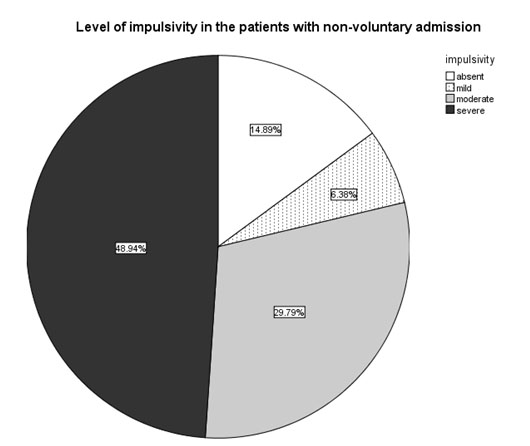 Fig. 6. Prevalence of specific impulsivity scores in the patients with involuntary (n1=47) admission 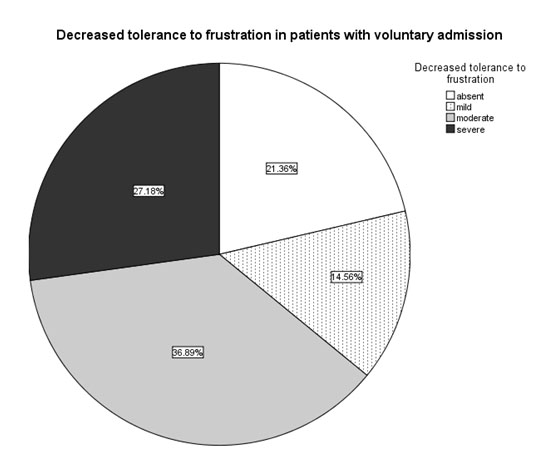 Fig. 4. Prevalence of specific low tolerance to frustration scores in the patients with voluntary (n2=56) admission 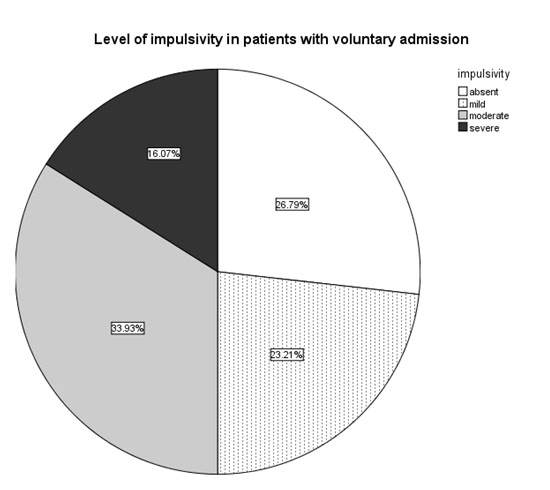 Fig. 7. Prevalence of specific impulsivity scores in the patients with voluntary (n2=56) admission 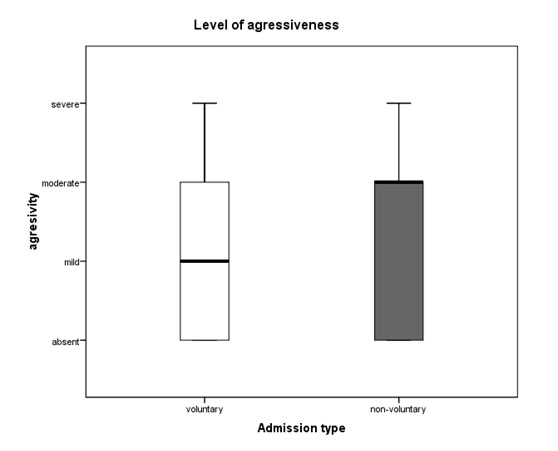 Fig. 8. Boxplots of the distribution of the aggressiveness scores in the involuntary (n1=47) and voluntary (n2=56) admittance groups (p=0.059) 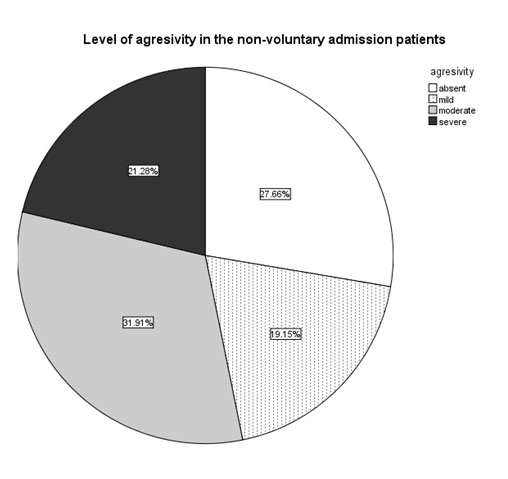 Fig. 9. Prevalence of specific aggressiveness scores in the patients with involuntary (n1=47) admission 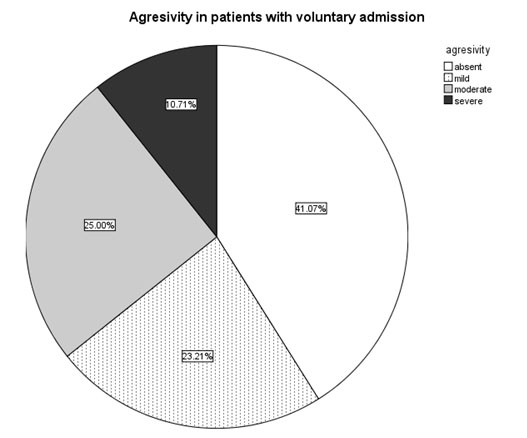 Fig. 10. Prevalence of specific aggressiveness scores in the patients with voluntary (n2=56) admission 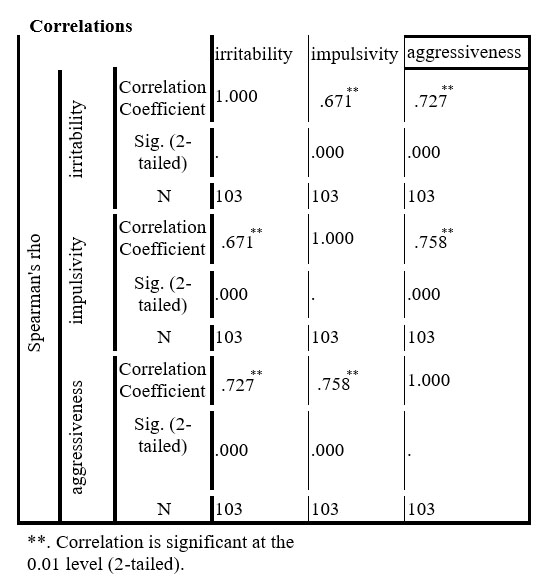 Table 1. The correlations between the scores on the irritability, impulsivity and aggressiveness scales 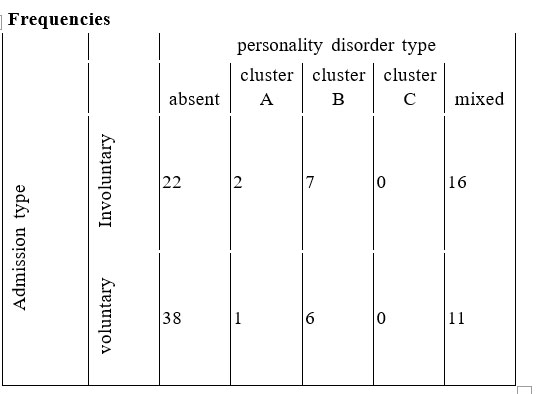 Table 2. Number of patients with voluntary/involuntary admission distributed according to the personality disorders 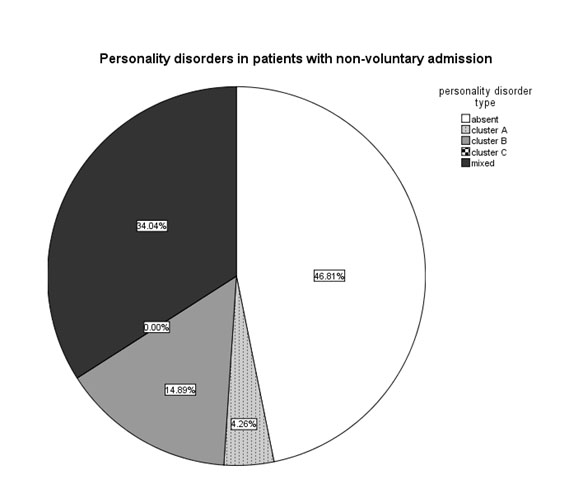 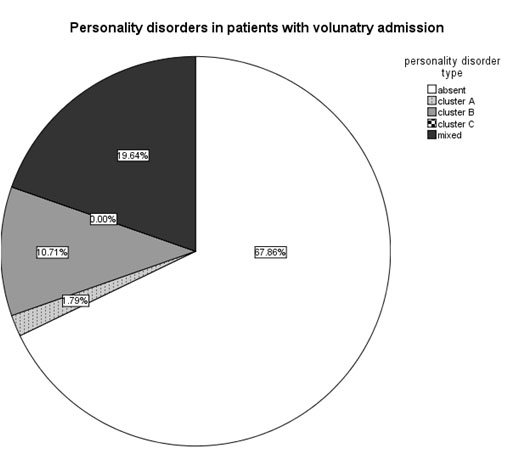 DISCUSSIONS
Apart from the behavioural correlation stressed by Mann et al., depression and impulsivity seem to be also linked on a molecular level. Serotonin regulation abnormalities have been tied to both irritability and depressed mood (5, 6, 7). The same neurotransmitter has b e e n i m p l i c a t e d i n t h e m e d i a t i o n o f o t h e r psychopathological traits like aggression and anxiety (5, 6, 7).
In a study on patients with major affective disorders, Oquendo et al slightly modified the diathesis model created by Mann et al. (3), stating that persons who go on to commit suicidal acts after a depressive episode tend to develop more pessimism in response to a stressor and/or have aggressive/impulsive traits (8).
In a review of empirical studies, published in 2001, it was found that impulsivity and aggression were traits consistently associated with completed suicide (9). In another study that compared serious and non-serious suicide attempters, it was found that in the first group there were significantly higher impulsivity, violence, anger-in and anger-out scores (10). Perroud et al., in 2011, studied a sample of patients with major affective disorders. It was found that impulsive and aggressive traits strongly correlated in suicide attempters, independent of diagnosis, but impulsivity distinguished suicide attempters from non-attempters only in the major depressive disorder group, and not in the bipolar disorder group (11). In a psychological autopsy study of 351 suicides, McGirr et al found that impulsivity was a valid risk factor for suicide (12). There are many other studies that found impulsivity and aggression as valid suicide risk factors (13, 14, 15, 16, 17). One review found that the information available regarding anger, irritability and hostility as suicide risk factors is insufficient and more research is needed (18).
A paper published by Oquendo et al in 2000 found that in bipolar suicide attempters compared with bipolar non-attempters there was more lifetime aggression but not more lifetime impulsivity (19). One review, published in 2013, found that impulsivity is not a predictor for repeated suicide attempts (20). Other studies found a correlation between irritability (21, 22, 23, 24, 25, 26, 27, 28) and aggression (29, 30), but not both, and suicide risk.
Our data also found that impulsivity and aggressivity were correlated with suicide risk (p<0.001, p=0.059 respectively).
Another strong correlation found in our sample was between aggression/impulsivity and the irritability present during the present depressive episode (p<0.001 in both cases), but there was no significant correlation between irritability and suicide risk (p=0.266). In the literature we found few studies that addressed the issue of irritability as a suicide risk factor (31, 32, 33, 34, 35, 36). The results of these studies are in contradiction: three of them found a correlation (32, 33, 34) while the other three found no statistical significance regarding irritability as a suicide risk factor (31, 35, 36). This is an area that requires further research.
T h e h i g h c o r r e l a t i o n b e t w e e n t r a i t aggression/impulsivity and irritability is an interesting find suggesting that a subtype of patients might present with a predominantly irritable clinical aspect of the depressive episode. This is of particular importance in the diagnosis of a depressive episode, since irritability is not included as a symptom either in the DSM IV-TR criteria or in most scales that evaluate depression. It would be easy to misdiagnose such a patient. As a consequence, the patient’s suicide risk might be evaluated as being lower that it actually is.
In our sample we also found a strong correlation between a low tolerance to frustration and suicide risk (p=0.003). This is an area where virtually no research exists. Generally, this variable has been associated with personality disorders. While it is true that in our sample patients with comorbid personality disorders were more frequent in the suicide risk group, the high correlation between a low tolerance to frustration and suicide risk was not fully explained by the existence of this comorbidity.

LIMITATIONS
This study was conducted on male inpatients. Further research is needed in order to determine whether these results can be extrapolated to the general population.

CONCLUSIONS
The data obtained from our study confirms the importance of evaluating trait impulsivity and trait aggression while evaluating suicide risk in depressive male patients. The degree of irritability was not correlated with suicide risk in our sample, but this is an area that has had little research and a definite conclusion cannot be drawn as yet. A possible new suicide risk factor was identified as being low tolerance to frustration. Further research is needed in this area.