QUALITY OF LIFE AND PSYCHIATRIC SYMPTOMS IN PARANOID SCHIZOPHRENIA

A complex psychopathological reality, that affects not only the person, but the family and the comunity, schizophrenia is even nowadays a challenge, both from a pathogenic point of view and a therapeutic one. While early treatments aimed to reduce the symptoms, modern ones are approaching the illness from a broader perspective, encompassing biological, psychological and social factors. This is why the concept of quality of life (QoL) is considered nowadays as a key outcome variable in schizophrenia.
Although the concept of is broadly accepted, there is no unanimously accepted definition for it. During the past 30 years, various definitions were proposed, raging from a focus on psychological aspects as feelings of well-being or satisfaction, to different living standards like perceived health, finances, housing or employment status.
Assessing QoL in schizophrenia patients is also a subject of intense debate in scientific community. The main area of discussion regards the use of objective versus subjective ratings. While some argue that reality distortion and the deficit syndrome narrows the patient’s ability to perceive and assess correctly external cues, objective assessments, conducted by clinicians, were not consistently correlated with subjective ratings. However, in an attempt to reconcile “the quest for subjectivity with the question of reliability”, Voruganti, Heslegrave, Awad, and Seeman concluded that “clinically compliant and stable patients with schizophrenia can evaluate and report their quality of life with a high degree of reliability and concurrent validity, implying that self-report measures are potentially useful tools in clinical trials and outcome studies” (1). For the patients with a lower degree of compliancy or in an acute phase, a complete and reliable Qol assessment should also include input from the health care, rehabilitation, family, and community systems.
Another issue where consensus was not reached regards the relationship between the psychiatric symptoms and Qol in schizophrenia.
Many studies emphasized a connection between the two measures. Voruganti, Heslegrave, Awad, and Seeman (1) found that psychopathology, as determined by total
Brief Psychiatric Rating Scale, correlates negatively with subjective quality of life subscales, but not with objective ones. In addition, negative symptoms seem to have a greater impact on subjective measures of quality of life. Norman et al. (2) showed that both positive and negative symptoms were related to the scores on the Quality of Life Scale. Brown et al. (3) studied QoL in patients with schizophrenia who were attending a rehabilitation centre and learned that it is inversely related to negative symptom severity. In an article from 2010, Gallupi, Turola, Nanni, Mazzoni, and Grassi (4) showed that QoL was negatively related to psychiatric symptoms.
A number of studies have pointed out a strong relationship between QoL in schizophrenia and general psychopathology measures, and moreover, that the positive and negative symptoms are less related to the quality of life. Huppert, Weiss, Lim, Pratt, and Smith (5) found that higher anxiety ratings were associated with less satisfaction with global quality of life, daily activities, family, health and social relationship. No other symptoms of schizophrenia were as strongly associated with subjective quality of life. Hoffer, Kemmler, Eder, Edlinger, Hummer, and Fleischhacker (6) indicated that d e p r e s s i o n / a n x i e t y c o m p o n e n t o f t h e PA N S S , parkinsonism, and a negative attitude toward antipsychotic medication negatively influenced the patients’ QOL, while cognitive symptoms and employment status correlated with higher QoL. Saarni, Viertiö, Perälä, Koskinen, Lönnqvist, and Suvisaari (7) state that depressive symptoms are the strongest predictors of poor QoL in psychotic disorders (schizophrenia, bipolar disorders, other psychotic disorders). Wilson-d’Almeida, Karrow, Bralet, Bazin, Hardy-Bayle, and Falissard (8) demonstrated that a decrease in symptoms in outpatients diagnosed with schizophrenia was correlated to an increase in both expectations and perceived position in life but did not correlate to quality of life.
Although the outcomes of the studies above are divergent in some degree, authors admit that QoL is a multifaceted concept and the crucial role of the social, psychological and cultural factors cannot be eluded. In a cross-cultural comparison, Gaite et al. (9) indicated work, finances, and safety as more independent from local variations. Ritsner et al. concluded that “psychosocial factors rather than psychopathologic symptoms affect subjective QOL of hospitalized patients with severe mental disorders” (10), while, in a qualitative research, Gee, Pearce, and Jackson (11) identified ten domains with impact on Qol: barriers placed on relationships; reduced control of behaviors and actions; loss of opportunity to fulfill occupational roles; financial constraints on activities and plans; subjective experience of psychotic symptoms; side effects and attitudes to medication; psychological responses to living with schizophrenia; labeling and attitudes from others; concerns for the future and positive outcomes from experiences.
Beyond the theoretical interest that incongruence on this topic arouses, pragmatic aspects as the need to develop complex ways to assist the suffering person extra muros, outside the walls of the hospital and outside the walls of mental illness itself, determined the research described in the following paragraphs.

Table 1. Demographic characteristics of the participants

Instruments
· Short Form-36 Questionnaire (SF-36)
SF-36 Questionnaire is a generic instrument designed and tested by New England Medical Center in order to assess the health status in a large number of medical conditions. SF-36 is the short form of a 245 items questionnaire developed within Medical Outcomes Study. The questionnaire was proved to be useful in monitoring patients with single or multiple pathological medical conditions. As a meta-analytical study on this topic shows (12), it is placed by many authors on a higher position than other generic instruments used in the assessment of quality of life in chronic illness. The instrument is a self- administrated one and it consists in 36 items grouped in 8 scales: physical function (PF), physical role (PR), somatic pain (SP), general health (GH), vitality (VT), social function (SF), emotional role (ER), mental health (MH). The 8 scales are subordinated to two generic concepts: physical health (PF, PR, SP, GH) and mental health (VT, SF, ER, MH).
The scale was translated and adapted in Romania due to the International Quality of Life Assessment project (IQOLA).
· Positive and negative Syndrome Scale (PANSS) Published in 1987 by Stanley Kay, Lewis Opler and
Abraham Fiszbein (13), PANSS became one of the most used tools in studies regarding the antipsychotic treatment.
As the name suggests, the scale is a medical scale that measures the severity of the two types of symptoms found in schizophrenia: the positive (delusions, conceptual d i s o rg a n i z a t i o n , h a l l u c i n a t i o n s , h y p e r a c t i v i t y, grandiosity, suspiciousness/persecution, hostility) and the negative ones (blunted affect, emotional withdrawal, poor rapport, passive/apathetic social withdrawal, difficulty in abstract thinking, lack of spontaneity and flow of conversation, stereotyped thinking), to which is added a general psychopathology scale (somatic concern, anxiety, guilt feelings, tension, mannerisms and posturing, depression, motor retardation, uncooperativeness, unusual thought content, disorientation, poor attention, lack of judgment and insight, disturbance of volition, poor impulse control, preoccupation, active social avoidance).
In order to optimize the objectivity of the tool and to assure valid data, a standardized interview used previously to the scale completion was created: the SCI- PANSS (Structured Clinical Interview for PANSS).
In Romania, the instrument was adapted under the coordination of Simona Ştefan, Daniel David and Doina Cosman.

Procedure
The participants were provided with verbal and written information regarding the purpose and length of the evaluation, confidentiality issues, and the possibility to leave the study at any time. Afterwards, they were asked to express their written consent to take part in the research.
Each participant took individually the standardized SCI-PANSS interview and was instructed in self administrating the SF-36.
The statistic processing of the collected data was done using SPSS (Statistical Package for Social Science), version 15.0 for Windows. 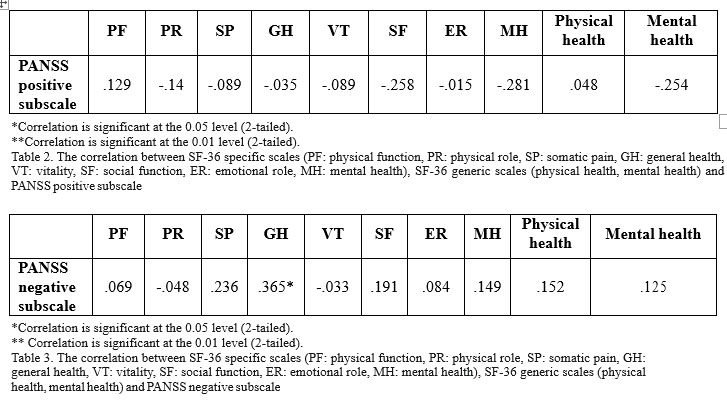 DISCUSSIONS
For the last two decades, the topic of QoL in schizophrenia has been a subject of debate among specialists, especially due to its important therapeutic implications. Although a special interest was shown to the relationship between QoL and psychiatric symptoms, different measuring strategies, various study designs or diverse approaches in defining QoL resulted in a number of conclusions that are not always convergent.
In this study, QoL was not related to positive or negative symptoms of paranoid schizophrenia, but there was a negative connection between the self-reported mental health and general pathology. Among the general symptoms, depression, guilt feelings, unusual thought content, poor attention, anxiety and tension correlated in a negative ratio with QoL. We can infer that, for the participants in this study, outpatients, in different degrees of remission, the impact of specific schizophrenia symptoms on the perceived QoL was rather weak. According to these results, in a stable, compliant patient, other variables are more likely to contribute to the sense of well-being. Fitzgerald et al. (14) reported similar findings, but, in their study, subjectively reported life satisfaction correlated especially with depressive symptoms. The results are consistent with Eack and Newhill’s meta- analytical study which pointed out that “weighted effect size analyses revealed small relationships between psychiatric symptoms and QoL, with general psychopathology showing the strongest negative associations across all QoL indicators” (15).
Furthermore, as the results suggest, general symptoms can have a negative impact on social functioning. Guilt feelings, unusual thought content, tension, depression, and poor attention can also have a negative impact on the level of social functioning, while depression, unusual thought content, guilt feelings, poor attention, disturbance of volition can alter the person’s vitality.
In addition, although pain is not in the foreground of this chronic disorder, the results show that somatic issues can interfere with variables like somatic concern, depression, anxiety, unusual thought content, and preoccupation, demonstrating once again the need to place QoL in relation to the bio-psycho-social triad represented by each individual.
All these findings suggest that, beyond the specific medical treatment, in a stable phase of the disease, psychological and social factors must be addressed in order to enhance the health of the person in sufferance. This is why, in the author’s opinion, the results can open new perspectives to community psychiatry, psychology and psychotherapy.

CONCLUSIONS
Pharmacotherapy in schizophrenia has come a long way since the first neuroleptics, allowing the clinicians to focus more and more on community-based care of people with this type of mental illness. This paradigm shift brought a greater concern towards the quality of life of the suffering person, as the large number of studies on this topic indicates.
The present research on psychiatric symptoms and QoL in people with schizophrenia highlights the impact of some nonspecific symptoms, like depression, guilt feelings, unusual thought content, poor attention, anxiety or tension, on the self-rated mental health. The same factors also seem to connect with social functioning. More permeable to psychotherapeutic intervention, these variables could be integrated in complex therapeutic strategies, together with the encouragement of increased participation of families and communities in the treatment.
The relatively small number of participants, slightly uneven distribution by gender and level of education, the transversal design, the use of a generic Qol questionnaire, and the heterogeneous pharmacological treatment can be pointed out as study limitations. However, in the author’s opinion, the results of the research can help to create a link between the hospital-base care and the social integration of the person diagnosed with paranoid schizophrenia.