The past decades brought a lot of theories on the structure of personality organization, on personality disorders and we strived to find strategies and algorithms to diagnose and treat these conditions. The categorical approach seemed to bring too less information about the person and leaves no room for individualized treatment strategies. The differences between two persons diagnosed with borderline personality disorders can be so significant that it is impossible to find a common guideline to even try treating them. Of course this led researchers to introduce the dimensional approach which brings a lot of information about the trait profile of a person and conserves the continuum between normality and pathology.
But what is a personality disorder? We probably agree on the fact that it is a condition when nature and nurture form a personality that can’t cope with the problems of everyday life and this state finally leads to suffering. The above statement is adopted by different models in different ways. Phenotypic trait personality models, like the five factor model, are extremely useful, but as we know there are a lot of overlaps between different domains. Developmental trait personality models take into account both the underlying biological dispositions to observable behaviors and individual differences in responses to experience during personality development (1). A developmental personality model is Cloninger’s seven factor model, which needs to be mentioned because the model stated 20 years before the introduction of DSM- 5, that a personality disorder is a deficiency of self and interpersonal functioning, namely low scores on Self- directedness and Cooperativeness(2). So the alternative DSM-5 model of PD could be considered a good effort to combine the above mentioned dimensional models. This model defines PD as moderate or greater impairment in personality functioning and the presence of at least one pathological personality trait which can be assessed with The Personality Inventory for DSM-5(PID-5) (3).
When diagnosing PD the clinician has to be aware that after the diagnosing procedure he has to establish a therapeutic plan which can consist of psychotherapy alone or in combination with the psychopharmacological treatment. First we will present our concerns about the alternative DSM-5 model then we will describe the utility of mapping traumatizing life events and defense mechanisms.
Our first concern about this model is that it tries to obtain informations about the person who is egosintonic with his functioning and traits. For example a person with PD rarely knows or admits that he is seen as irresponsible by others with think that questions shut be much more indirect in some cases. Of course there is an informant form for PID-5, but unfortunately we hardly get them filled out in clinical settings.
One of our previous studies showed that from a psychopharmacological point of view traits which are allocated to self-esteem and individual superego seem to be difficult to integrate, namely manipulativeness, d e c e i t f u l n e s s , g r a n d i o s i t y, c a l l o u s n e s s a n d irresponsibility.
Except grandiosity, which can be considered a pathological defense mechanism, these traits belong to the moral consciousness and therefore should be integrated as part of the interpersonal functioning or separately because it can be a target for psychotherapeutic interventions. If assessed separately moral consciousness should contain another facet called moral torture. This facet could be describes as follows: directly and deliberately disparage, slander, calumniate or defame someone to satisfy ones sadic pleasures (4).
We think that in a holistic approach it is extremely important to obtain informations about traumatizing events in early life and defense mechanisms.

Traumatizing events in early life
It is well known that our character’s maturity depends on environmental factors that occur during childhood and this is also the period of acquiring mature defense mechanisms. Figure 1. explains these views. 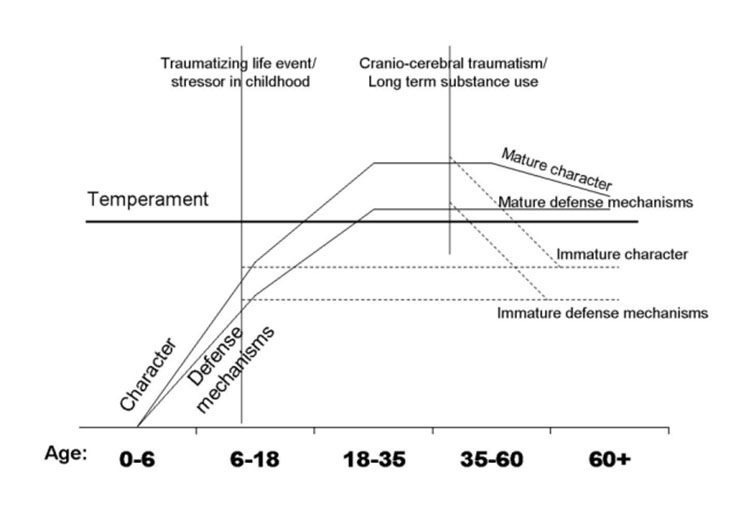 Figure 1. The development of character and defense mechanisms. At the age of 3 character begins to develop and reaches a level that can “control” temperament at age of 18. Around age 35 character reaches maturity and starts its physiological decline around the age of 60. Any traumatizing life event can slow down or stop character development which leads to an immature character and implicitly to a PD. However, a mature character is not an insurance for a life: cranio-cerebral traumatisms and substance abuse can also affect character and accelerate the physiological decline resulting in an organic PD. The development of mature defense mechanisms has a similar path
When mapping the traumatizing events in early life we could use an adopted version of DSM-IV Axis IV (5) (Table 1.) 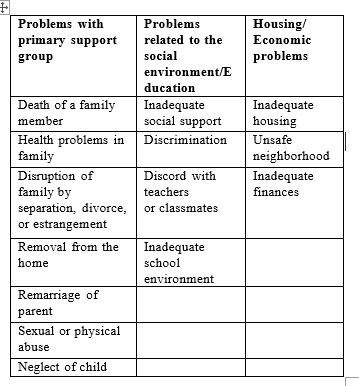 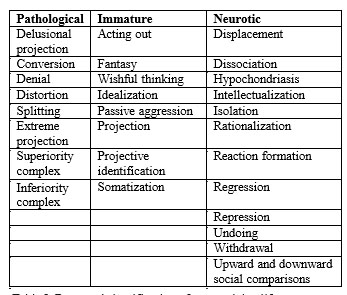 Our proposed algorithm to diagnose PDs starts with the clinical diagnosis that includes also the mapping of traumatizing life events, defense mechanisms and facets of moral conscience followed by the PID-5 without assessing the domain of Antagonism as shown in figure 2. 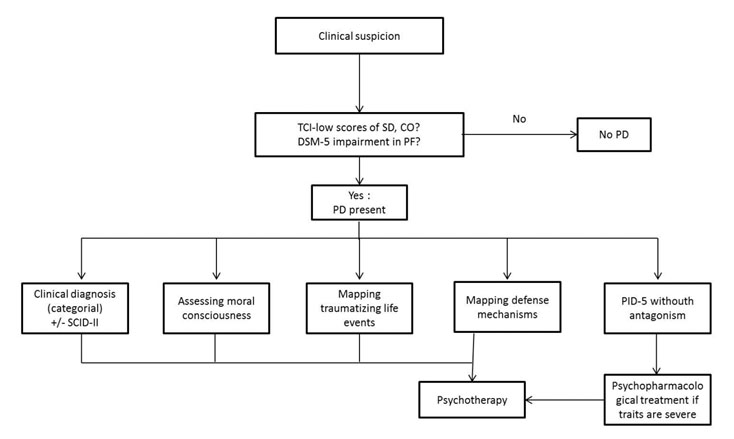