Personality disorders (PDs) are common, debilitating psychiatric conditions that have enormous costs to patients and their family members, and more broadly, to society. Unfortunately, these conditions are also widely misunderstood and misdiagnosed (1). With respect to prognosis, PD may be associated with increased risk for criminal and violent behaviour, as well as with poor response to psychosocial rehabilitation and crime reduction programs (2). More than half of those with PD also had an axis 1 disorder (3) and patients with co-morbid psychotic disorders and personality disorders are among the heaviest users of psychiatric services (4) and forensic services also. On the other hand, the number of forensic psychiatric inpatients has been growing markedly and risk assessment and management of patients with severe mental illness are increasing priorities for mental health services (5).

There is few data in literature relating to those with schizophrenia (or other schizophrenia spectrum disorder) also diagnosed with personality disorder who committed a criminal act (more often violent) and are referred to forensic psychiatric services (compulsory hospitalization as medical safety measures according Romanian law).

The primary objective of this study is to analyze the implications of PD co-morbid with schizophrenia (or other schizophrenia spectrum disorder) on the clinical course and treatment received and on violent behaviour in patients admitted to implement safety measures of a medical nature. The secondary objective is to provide epidemiological data essential for the development of forensic mental health services strategy.

The study is a longitudinal and observational,non-interventional one, accomplished by Sapoca PSMH (Psychiatry and Safety Measures Hospital) during 12 months in 2008-2009. There were included in the study patients hospitalized in forensic psychiatric wards diagnosed with schizophrenia or other schizophrenia spectrum disorder:    F20-F29 according to ICD 10 (International Classification and Statistics of Diseases and Related Health Problems, Revision 10), aged 18-65 years who have signed consent for participation. There were excluded patients with length of stay longer than 2 years. The baseline data were obtained from medical and legal documents. Patients were evaluated and have been applied scales: SCID-II (Structured Clinical Interview for Personality Disorders Clinical), PANSS (Positive and Negative Symptom Scale – Scale of positive and negative symptoms in schizophrenia), CGI-S (Clinical Global Impression – Clinical Global Impression -severity) and HCR-20 (Historical Clinical and Risk Management). Information used was: socio-demographic data (age, gender, origin, education, and occupation), psychiatric, forensic and criminal history, alcohol use, offense.  The patients were evaluated at baseline, at 6 months and 12 months (end of study): PANSS, CGI-S, and HCR-20.
During the study period we followed the therapeutic plan (antipsychotics, mood stabilizers, and occupational therapy – OT) and the interpersonal violent behaviour.

Instruments
Psychotic disorder was diagnosed accordingly to ICD-10 (6) and PD was assessed with semi-structured interview SCID-II (7) only from a categorical perspective and not dimensional and the diagnosis was based on ICD-
10 (F60-F61). To evaluate the clinical course we used PANSS (positive, negative, general and total scores, excited- component score) and CGI-S (8, 9).
To assess the risk of violence it was used HCR-20, scores (subscales: H, C, R and total) and violence risk assessed (low, medium and high). The final risk assessment of violence was made following the discussions of the two independent assessors with accredited training (10). The HCR-20 was used only for research purposes and the proposal to change the safety measure by the forensic psychiatric commission being based on the current methodology (mainly clinical judgment).
Violence in hospital was considered only if it had been documented by medical staff and it was understood as damaging to one or more persons that an attempt or threat as described by the authors of the HCR-20 (10). Statistical analysis of data was performed with SPSS 21.0. (Statistical Package for Social Sciences) for Windows. The tests used were chosen based on the type of variables: t test for two independent samples (interval variables), chi- square test of association – cross-tabulation (for nominal and ordinal variables), correlational analysis, Mann- Whitney test, ANOVA test (repeated measures, mixed), Kaplan-Meyer survival analysis.
Ethical Considerations
The study was non-interventional, data used were collected only from medical and forensic records and the three assessments of the study corresponded to periodic assessments of forensic inpatients according to the law. The therapeutic program was conducted by the treating psychiatrist in the patient’s best interest. Methodology of the study and informed consent model were approved by Ethical Board of Sapoca PSMH. Throughout the study it was considered legal and privacy rights of the volunteer participants. The study was conducted on a vulnerable population.
Methodological limitations
There are considered as methodological limitations: the small number of participants and the lack of validation on Romanian population of assessment tools used. Evaluation of violent behaviour and participation in occupational therapy (OT) based on the information noted in the observation sheets by untrained medical personnel specifically for the study.
RESULTS Participants
At screening the group of 128 subjects were
diagnosed with schizophrenia or other schizophrenia spectrum disorder and 28 of them had a diagnosis of PD. At baseline assessment there were identified 65 subjects with PD and 63 without PD. 109 subjects completed the study (53 with PD and 56 without PD); the reasons for non-completion (19 cases) were different (medical, legal, withdrawal of consent, unauthorized leaving hospital) (Table no.1).

Table 1. Group and subgroups: distribution on sex and mean age

At baseline the most commonly diagnosed was antisocial PD (36.9%) followed by borderline PD and mixed PD, noting important differences towards screening (diagnosis established by initial forensic expertise) (Table no.2). 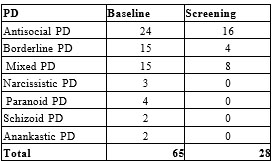 We observe dominant PDs from the B cluster (antisocial, borderline, narcissistic – 64.6%) while the PDs from A cluster (paranoid, schizoid, schizotypal) represents 9.2% and C cluster (anankastic, dependent, avoidant) only 3% (Figure 1). 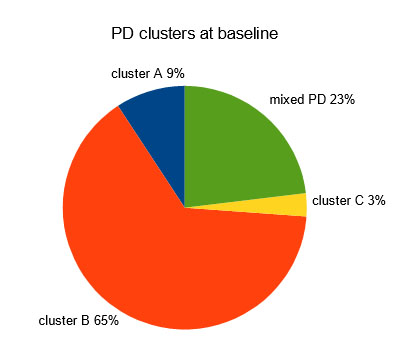 Figure 1. A pie-chart illustrating the distribution of PD
clusters at baseline

Comparative presentation of lots (PD vs. no PD)
The two samples were analyzed by independent t-test (age, scores, length of stay) and chi-square test (sex, occupation, education, area of origin, marital status, alcohol use, psychiatric, forensic and criminal history, violence risk). Subjects with PD were younger than those without PD, the mean age was lower in the PD group with statistical significance: t (104.7) = – 7.003, p = .000.
Groups are similar in terms of psychopathology and clinical symptoms, that there were no significant differences (p>0.05) for all the scales and subscales scores obtained (PANSS, CGI, HCR-20). PD significantly correlated with the risk of violence assessed at baseline: χ2 (2) = 7.81, p = 0.02. PD is associated with alcohol consumption: χ2 (1) = 37.611, p = 0.000, phi coefficient =
0.542, the relationship between the two variables is strong (according to Cohen, 1988); likehood of alcohol use (OR) is 12.5 times higher in PD group than no PD group (95% CI, 5.2-30.2) (Figure no. 2). 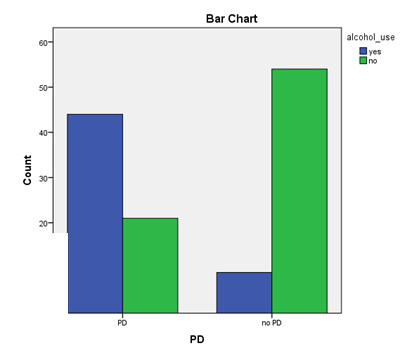 Figure 2. The relationship between PD and alcohol use for final sample

PD significantly associated with criminal records: χ2 (1) = 28.646, p = 0.000 and forensic history: χ2 (1) = 38.763, p = 0.000. PD is not significantly statistically associated with: gender, rural origin, marital status, occupation, education and psychiatric history (p>0.05).
In the group with PD violent index offenses are more common than in the group without PD (45 vs. 34) but the difference is not statistically significant (p = 0.116). Murder is more common in the group without PD (21 vs.15) also without statistical significance (p = 0.358). PD type mattered, with statistically significance (Kendall tau_b correlation), for criminal records (0.447, p = 0.000) and for participation in occupational therapy (-0.228, p =
0.047) and for repeated violence (0.371, p = 0.001). From the descriptive analysis it was observed that patients with antisocial PD often had a criminal history and those with borderline PD paticipated less at occupational therapy. Repeated violence during the study was more common those with antisocial PD and mixed PD. There were no statistically significant correlations between types of PD and other variables. 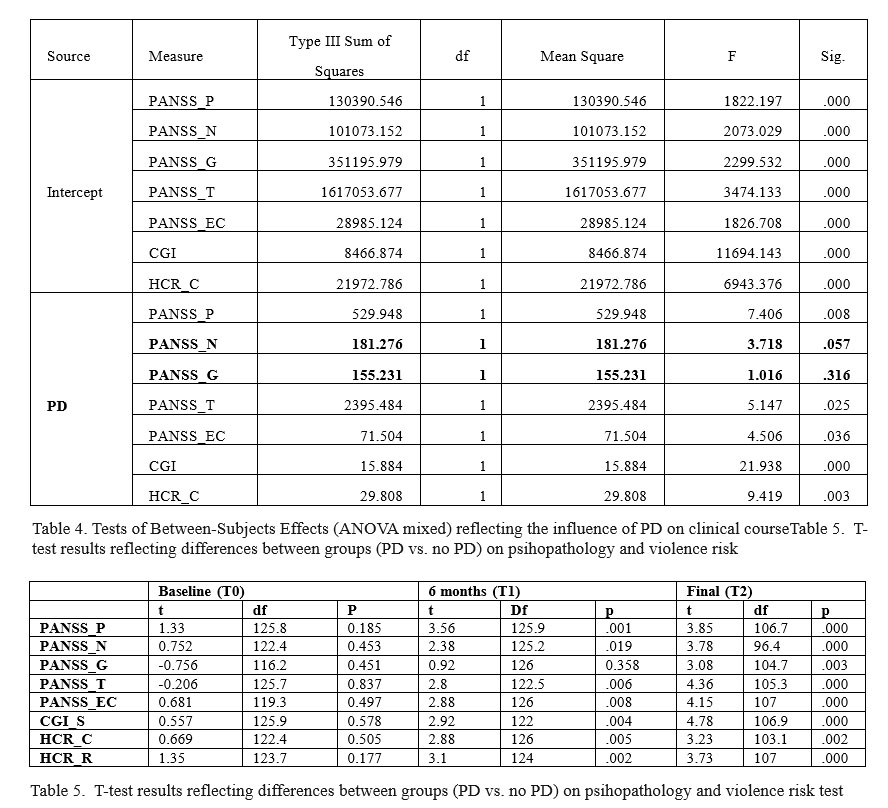 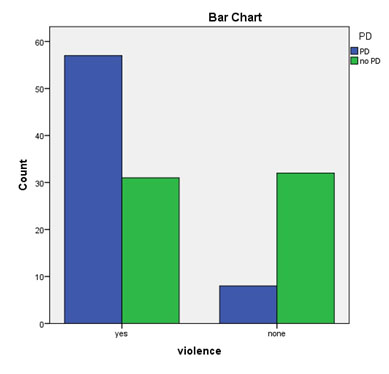 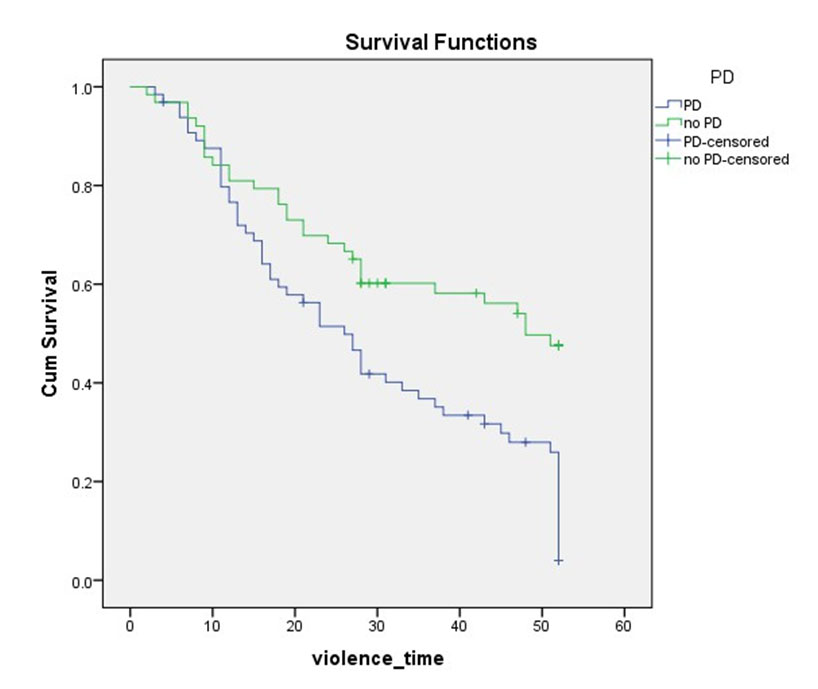 Treatment plan
There were statistically significant differences between groups regarding the therapeutic plan (chi-square test). PD significantly correlated with: the use of antipsychotics in combination, the use of mood stabilizers and low participation in OT (table no. 7).

Participation in OT is negatively correlated with violence, which means that participation in OT can be considered protective factor for the occurrence of violence only in the group without PD. Only in the group without PD, chi-square test showed a statistical significance between participation in OT and violent behaviour: χ2(1)
= 12.270, p = 0.000, an observation confirmed by Kaplan- Meyer survival analysis.
In the group without PD, participation in OT is an independent factor with statistical significance to clinical improvement in subscales: PANSS_ P (p = 0.002), HCR_R (p = 0.000) and HCR_C (p = 0.000), but in the group without co-morbid PD, participation in OT does not correlate with clinical improvement than for HCR_C (p = 0.024). Note that patients with schizophrenia and PD participating in OT have a better evolution in terms of positive symptoms and risk factors. PD correlates with poor therapeutic compliance and even with therapeutic resistance. Therapeutic compliance is seen better by participating in OT because pharmacological treatment administration is strictly monitored by medical staff.
Patients with psychosis and co-morbid PD were more often treated with a combination of antipsychotics than with monotherapy but without statistical significance. Type of antipsychotic drug used (first generation, second generation, combination) does not matter in clinical outcome for patients regardless of the presence of PD. These results are confirmed in mixed ANOVA: there is interaction effect, time*antipsychotics, only for PANSS_EC (p=.012) and only for psychotic PD patients. There isn’t any interaction effect with statistical significance in the group without PD. Significant difference was observed only for PANSS-EC subscale (p = 0.000) in the PD group which means that the use of antipsychotics in combination was an independent factor for decrease PANSS-EC score. This observation supports the complexity of therapy necessary for these patients (PD co-morbid schizophrenia) with the rising cost of hospitalization.

Risk assessment
PD mattered significantly for the discharge proposal: χ2(1)=7.07, p=.008. Patients without PD had a higher likelihood (OR=3.3, 95% CI, 1.33-8.23) of being proposed for discharge compared to those with PD co-morbid schizophrenia.
There was a statistically significant correlation between the PD and HCR-20 risk-assessed (low, medium, high): χ2 (2) = 7.81, p = 0.02.
In terms of predictive validity for violent behaviour we analyzed HCR-20 risk assessed, HCR-20 scores (total, C, R), PANSS_EC and observed an average predictivity (0.7 to 0.75) for the group without PD and a low predictivity for the group with PD (table no.8).

The study achieved its primary objective of identifying the implications of PD co-morbid with schizophrenia (or other schizophrenia spectrum disorders) on forensic patients: PD is associated with alcohol use, violent behaviour and the need for complex and individualized therapeutic programs. These observations are important for assessing and managing violence risk in hospitalized patients assisted with medical safety measures (forensic patients). The survey data showed that PD co-morbidity is common in schizophrenia and most often is a cluster B PD and thus was fulfilled and the secondary endpoint to provide epidemiological data necessary development strategies forensic mental health services. Given the ethical and legal implications of judicial psychiatry is vital to providing quality services to ensure a balance between individual freedom and public safety interests. Further studies are needed, given the methodological limitations of this study.