INTRODUCTION
Post traumatic stress disorder (PTSD) represents the most investigated form of a posttraumatic reaction. According to the DSM IV TR (2000), the current standard for diagnosing mental disorders, PTSD is characterized by three distinct types of symptoms including re- experiencing of the event, avoidance patterns and persistent hyperarousal(1). Although epidemiological studies highlight that most people are confronted at least once in their lifetime with events of traumatic intensity, prevalence of posttraumatic stress disorder in the general population is relatively low (2).
Thus, traumatic exposure is neccesary, but not enough for developing PTSD. In consequence, researchers have directed their efforts to identifing the most influential risk factors that predict specific symptom development (3,4). Meta-analytic studies emphasized the relevance of distinct risk factors classified as pretraumatic, peritraumatic and posttraumatic. Conclusions (3,4) highlight the importance of traumatic event particularities, as well as individual characteristics that may put the person at risk of being traumatised. In light of recent findings, instead of dealing with isolated risk factors, there is a need to see how these factors interact influencing the person’s reaction to trauma and the experience of subsequent symptoms.Thus, trauma researchers’ current recomandations strongly suggest the need to identify risk pathways or mechanisms, underlying their relationship to outcome variables (5). Diversity of identified risk factors and different trajectories of vulnerability are proof of the fact that one cannot evaluate trauma reaction outside of the specific context of confrontation.
Person-under-train (PUT) accidents are serious rail incidents, resulting in violent death or injury of persons, because of accidentally or intentionally falling in front of the moving train (6). They consist of railway suicides, accidents or collisions of vehicles with the locomotive at level crossings. Being frequently exposed to these work incidents, train drivers are susceptible of developing posttraumatic reactions, and researchers have tried to identify risk factors that raise train drivers’ vulnerability to trauma.
Most studies investigate circumstantial factors that may influence train drivers’s response to trauma, like frequent exposure to job related incidents or severity of their consequences (7,8). Studies support the need to investigate the role of individual differences in the development and maintenance of PTSD symptoms in train drivers involved in PUT incidents(9,10).
Current perspective on the development and persistence of PTSD symptoms emphasizes the role of cognitive appraisal of the traumatic experience as a fundamental mediator in the posttraumatic adaptation process (11). Cognitive models of PTSD (12-14) assert that dealing with trauma produces alterations in the generic cognitive schemas about the world, self and others. Exposed persons’ perspective and belief system is being affected by the traumatic event, so that the world is perceived to be unsafe and threatening, and the self is seen as lacking the resources and skills needed to cope with the adversive environment (14,15).
Presence of these negative beliefs about oneself and the world, as a result of a traumatic encounter, represents the essential vulnerability factor for specific PTSD symptoms. Catastrophic interpretation that these central negative beliefs generate, involves retrospective exaggeration of traumatic events, and/or the permanent appraisal of being at risk to be exposed to a new trauma(14).
Cognitive distortions about the world and the self proved to be strong predictors of PTSD diagnosis, as they can discriminate between all trauma exposed individuals, those that developed clinically significant symptoms (16,17). Studies in samples with various types of trauma provide strong empirical support for the relationship between the altered beliefs about the self and the world and the frequency and severity of posttraumatic symptoms (16-19). Also, challenging and modifing these beliefs in cognitive-behavioral therapy for traumatised people has been effective in reducing specific symptoms PTSD (20).
In terms of work related trauma confrontation one study found that posttraumatic stress was predicted by pretrauma catastrophic thinking in a sample of firefighters exposed to on the job traumatic incidents (21). This risk factor may be essential for train drivers as well, because, although most of them are confronted with at least one PUT incident during their years of duty, studies show that just a few develop persistent PTSD symptoms (9). According to a french study(7), the traumatic potential of these incidents is mainly determined by the fact that the train driver may feel responsible for the death of the victims.
Another relevant risk factor for the development and persistence of PTSD symptoms, is peritraumatic emotional reactivity. A meta-analysis of risk factors for PTSD (4), highlighted that compared with pretraumatic factors (like previous traumatic history, family psychopathology, etc.), peritraumatic response was a stronger predictor (intensity of emotional reactivity during trauma, life threat perception during adversive event, peritraumatic dissociation).
Context of traumatic encounter does not imply life threat for the train driver and also dissociation is less likely to occur in these specific confrontations. In stead, differences in peritraumatic emotional intensity may be of relevance for the susbsequent development of PTSD symptoms in these proffesionals, as a particularity of trauma related to accidents. Studies provide empirical support for the relationship between increased intensity of emotional reaction during traumatic confrontation with motor vehicle accidents, disasters and subsequent PTSD symptoms (22-26).
An interesting and complex risk path or mechanism combines these two factors: the appraisal of the traumatic event and the peri-traumatic emotional reaction to it. Interpretation of the event may influence the subsequent development of the peri-traumatic reaction, which further on, will lead to the reinterpretation of the event and of the peritraumatic reaction to it (5). This chained reaction to PUT incidents may influence train drivers’ subsequent distress levels, and we consider further investigating it.

However, establishing a cut-off value is somewhat arbitrary and taxometric studies have reccomended a dimensional structure for PTSD as opposed to a categoric one (35).
Although it is a first study regarding the relations between studies variables, our results contribute to understanding the development of posttraumatic stress symptoms for train drivers exposed to trauma in their professional environment. Findings support the need for replication studies. Also, they highlight the need to include individual risk factors, in particular posttraumatic cognitions and peritraumatic distress, as relevant to prevention and intervention programs tailored for train drivers exposed to PUT incidents. 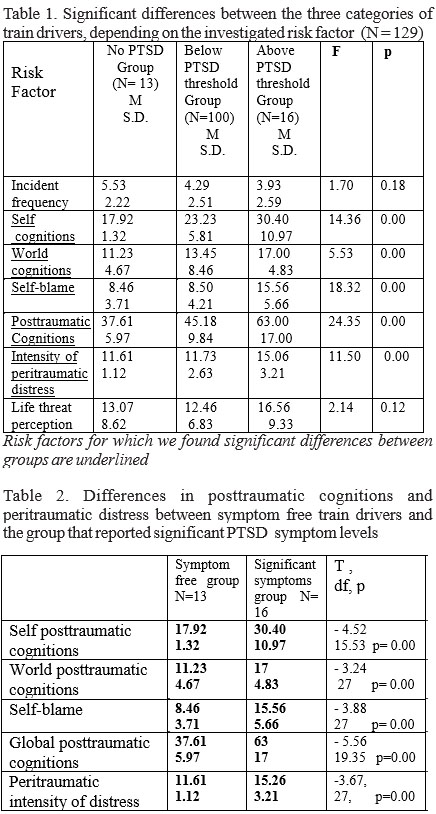 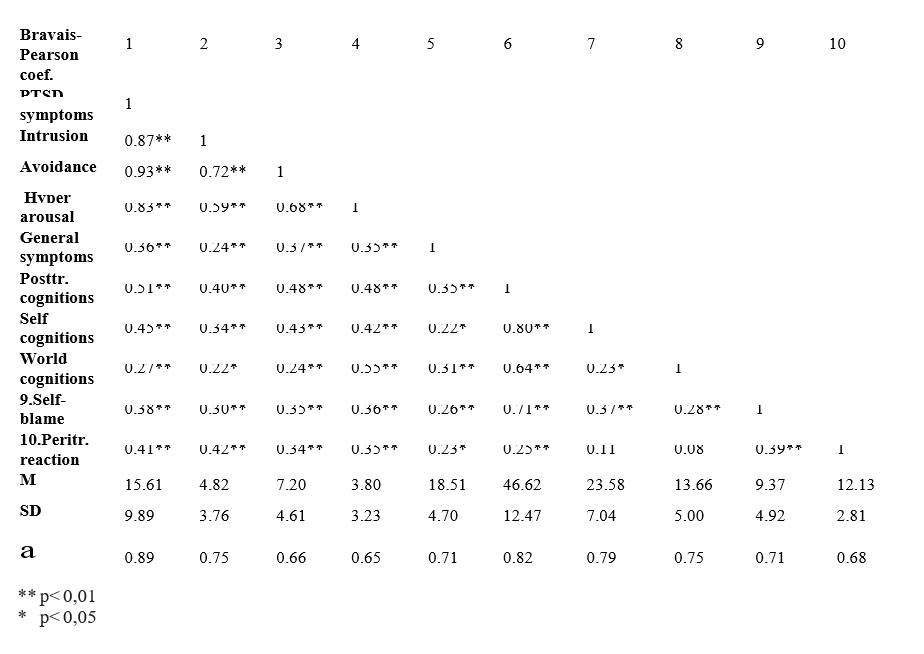 Fig. 1. Mediation diagram for peritraumatic emotional intensity as predictor of PTSD symptoms with self-blame as mediator