THE ASSESSMENT OF GLOBAL FUNCTIONING IN BIPOLAR PATIENTS WITH COGNITIVE DEFICITS

Prof. Dr. Richard Keefe has approved the free licensee for this research. Duke University holds the copyright for the Brief Assessment of Cognition in Schizophrenia, and it is licensed through NeuroCog Trials, Inc. 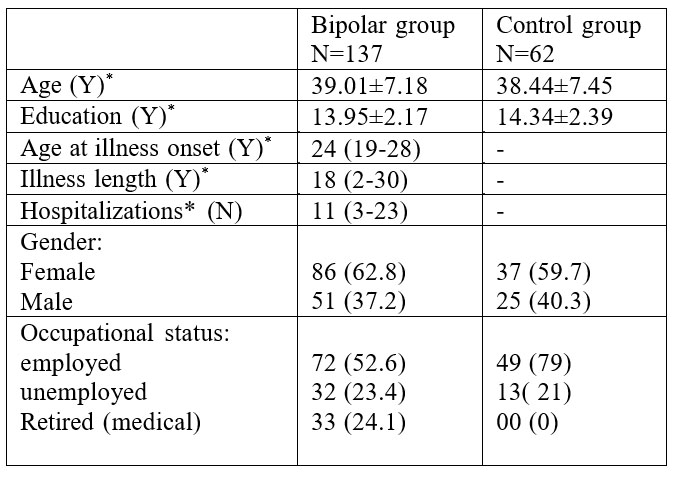 At the level of the entire group of bipolar patients, the bivariate correlation analysis has revealed a directly proportional statistically significant association between the categories of GAF score and the patients’ age at illness onset [r = 0.474; r 2 = 0.225; p < 0.0001]. Also, at the level of the entire group of bipolar patients, there has been evidenced an indirectly proportional statistically significant association between the categories of GAF score and the illness duration of these patients [rs = -0.443; r 2 = 0.196; p < 0.0001]. Similarly, the number of s
hospitalizations was significantly statistically correlated with the GAF score categories at the entire group’s level [rs = -0.594; r 2 = 0.353; p < 0.0001].
About half of the bipolar group’s patients are not included in the work field, being unemployed or medically retired. When analyzing the subgroups, it has been observed that manic patients and those with mixed episodes have similar employment percentages, but less than 50%, and the lowest employment percentage is obtained by patients in depressive episodes (40%). The rate of non-entering employment and disability among bipolar individuals is significantly higher than for the normal population (8, 9). A previous review which has brought together the results of several studies has concluded that 57-65% of patients with bipolar affective disorder are not employees (compared to 6% in the general population) (10). The percentages obtained in this thesis are close to those in the literature, namely: manics 53.7%, patients with depressive episodes 59.4%, and patients with euthymic episodes 52.4%.
Among the functionality predictors, which were the most common in previous studies, we mention the depressive symptoms and the cognitive impairment (9, 10, 11), our research being in accordance with these data. The group of bipolar patients has shown cognitive deficits in all assessed cognitive domains, compared to the healthy group. At the subgroups analysis, manic patients showed the most pronounced cognitive deficits, compared with other subgroups. These cognitive deficits persist in the euthymic period too.
The studies of Martinez-Aran et al. (12), Wingo et al. (13), Bonnin et al. (14) and Tabares-Seisdedos et al. (15), are recognized, being studies in which they support the cognitive impairment’s negative implications for the overall functioning. In concordance with the previous study, we found in the bipolar group GAF scores directly correlated to the scores obtained in all cognitive domains under assessment. Despite high energy, the impaired cognitive function does not support performance and the final result is an important decrease of functionality. Although patients with depressive episodes had the lowest occupational status, the lowest overall functionality was recorded, in this study, for patients with manic and mixed episodes (patients with the lowest scores regarding the assessment of verbal memory, working memory and executive function/judgement and problem solving). Most patients with manic and mixed episodes were included within the GAF score 40-50, while the majority of depressed patients obtained a GAF score of 51-60. Depressed patients, associated with the lowest occupational status, have the largest deficits in the cognitive domains of verbal fluency and psychomotor speed. Even if most euthymic patients were included within GAF 61-70, in terms of overall functionality, however, none of these patients exceeded this GAF range. These periods of clinical remission (euthymia) are marked b y s u b t l e s o c i a l , o c c u p a t i o n a l , a n d c o g n i t i v e dysfunctions, as stated by Lima et al. (16).
The disease’s long length, the large number of psychiatric hospitalizations and early onset of the illness were directly correlated to low scores of overall functioning, being able to conclude, with the help of this study’s results, that a severe course of the bipolar disorder is related to the low overall functionality. These conclusions are consistent with what Burdick and his collaborators presented, namely: a severe evolution of the disease (defined by an increased number of hospitalizations) is a significant and independent predictor of occupational damage regarding p a t i e n t s w i t h b i p o l a r a ff e c t i v e d i s o r d e r ( 1 7 ) . Hospitalizations are not only signs of disease severity but also interruptions of the personal functioning and development, discontinuities of personal evolution and a stigma motive in society.
What are the clinical implications of the fact that, for many patients, functional recovery cannot be expected to occur along with the achievement of syndrome or symptomatic recovery? Patients at high risk of failing to achieve functional recovery seem to be those who have recurrent, more severe and prolonged acute episodes. Rush states that for these patients there should be a special stage in which to try to identify and effectively treat the relevant cause of incomplete functional recovery, in order to normalize the daily functioning (18).