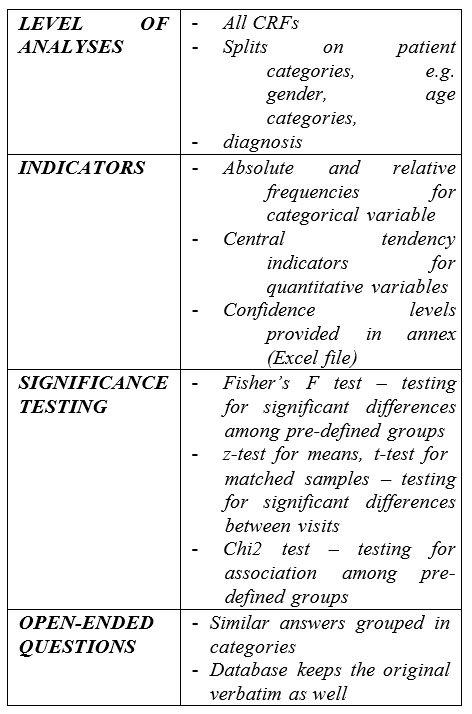 Table 1 – Statistical parameters
3. RESULTS
3.1. Demographic characteristics:
Women represented 68% of the population (n=1190) with a mean age of 48 years. A higher representation had the patients included in the 55 to 60 years’ age group (18%),followed by patients in the 50 to 55 age group (17%)
(n=1186). The lowest representation in the group was for the patients under 25 years (3%). No gender differences were seen regarding the type of episode and the duration of anterior affliction in patients with a current major depressive episode. The characteristics of the study group are presented in Table 2.
3.2. QIDS-C16 score and symptoms evolution: The average of QIDS-C16 score at inclusion was 12.25. This is associated with medium intensity symptoms. The symptoms were ameliorated by the AD treatment reaching a final score of 1.77 at V3 (the interval 0-5 is considered in normal range). The symptoms evolution was statistically significant between visits and also at the final visit (Table
3). The evolution of the symptoms severity at each evaluation (comparing to the initial moment) is graphically presented in Figure 1. 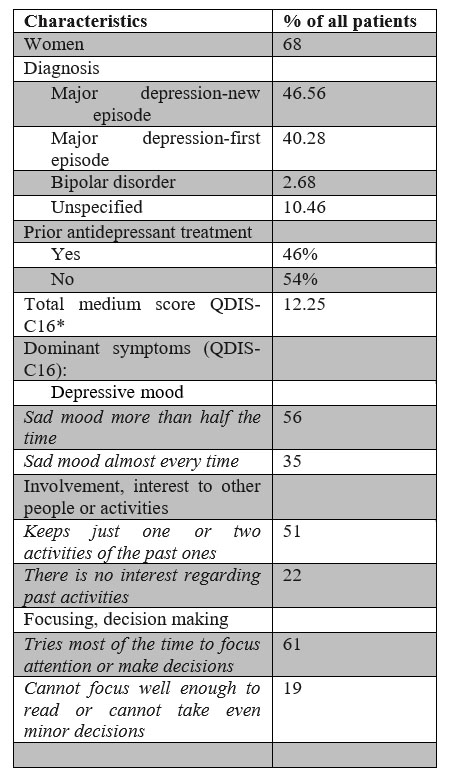 * n=1186-1189 for each domain evaluated with QIDS-C16
Table 2: Baseline characteristics of the MDD patients

Figure 1: Evolution of the MDE severity during study
(QIDS-C16 scale)

Table 3: Evolution of the MDE symptoms evaluated with QIDS-C16 scale

Table 4: The evolution of the depressed mood, anhedonia and impaired concentration/ making decisions during the study (QIDS-C16) 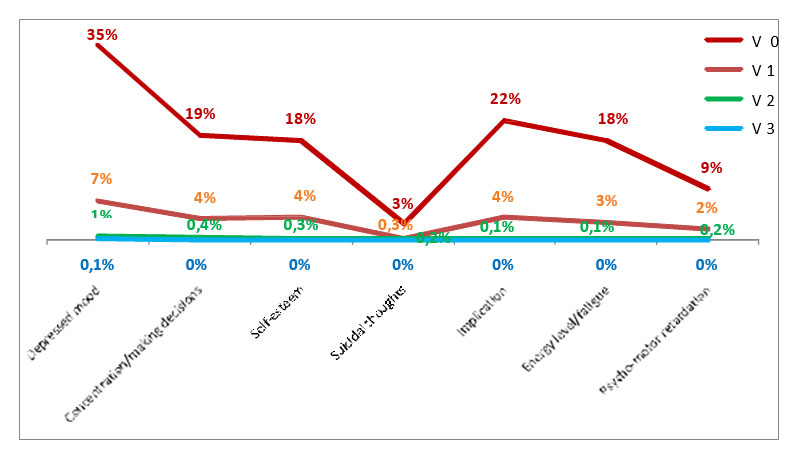 Figure 2: The evolution of the highest score symptomatology on QIDS-C16 scale 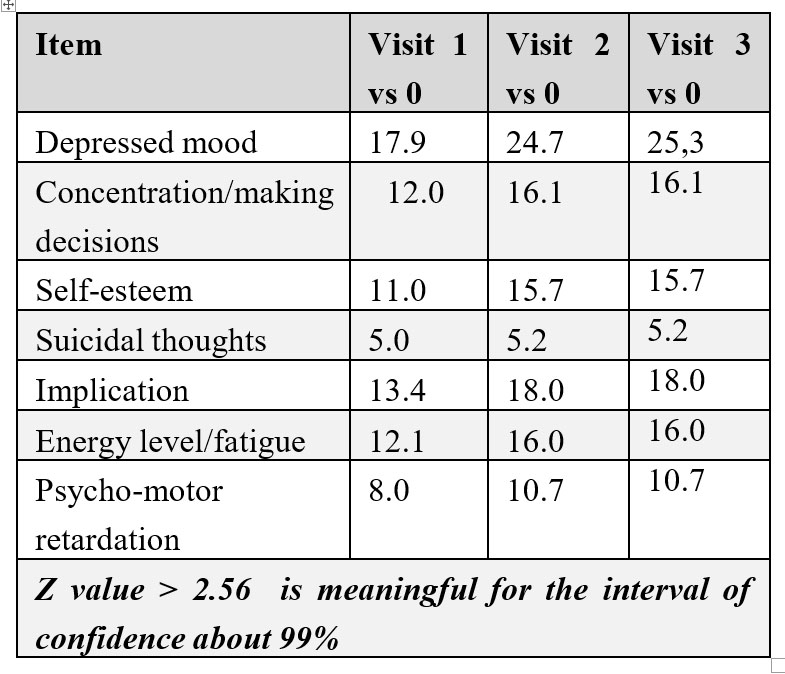 The statistics revealed that while all the patients presented a significant improvement of the symptomatology, some categories have registered more progress, as follows (supplementary details can be obtained on request):
·Age: The elderly patients (age between 65 and 75) have a slower improvement than other age categories, for all the visits (p=0.002 at V1, p=0.001 at V2 and V3);
·Major depressive episode (new/recurrent): it has been noted significant differences between the patients with a new major depressive episode and recurrent in all that concerns the total scores (ANOVA), but the items scores (Chi2). The patients with recurrent MDD had a slowly recovery.
3.3. Comorbidities of the MDD on the patients of the study:
The presence of somatic comorbidity was observed in
26% of the patients; the most frequently reported comorbidities (n=307) were arterial hypertension (82%) and the ischemic coronary disease (30%).
3.4. Adherence to treatment during the study:
From the patients who had previous AD treatment (n=645, 54%), the main reason for switching/discontinuing was the loss of therapeutic response, followed by the patients’ choice not to be treated with that AD or considering that he does not need treatment anymore. Though, there are cases for which this reason could not be specified.
At the end of the study98.5% of the patients (n-
1194) continued the AD treatment (7 patients discontinued the treatment due to economic reasons).During the observational study there have not been reported any adverse reactions linked to Agomelatine according to the investigators clinical judgement.
4. DISCUSSIONS
We noticed a concordance of the results of this study with the data from the literature regarding the percent of women with MDD and the low prevalence of depression in the age category under 25 years (2).
The group of patients enrolled in this study had a moderate symptomatology and this could be explained by the fact that patients who were addressing to the emergency services were excluded. Another explanation could be the presence of the residual symptoms in patients with recurrent depression and their treatment was changed because of the loss of therapeutic response (the main reason of the changing anterior treatment in this study).
For this group of patients, the symptomatology domains at the initial moments and who had a considerable improvement starting with the second week of treatment have been represented by the depressed mood, loss of concentration and making decisions and anhedonia. Of the three domains, after ten weeks of
treatment anhedonia presented a better improvement. (3rd table). Considering that the medication for the study was represented exclusively by Agomelatine, it is possible that this substance plays an important role which can concord with the results of the recent studies (4, 10).
In this study, the patients recently diagnosed (<3months) and treated have presented a significant improvement after ten weeks of treatment compared with the patients diagnosed with depression more than one year before. Also, the patients with more than 65 years old diagnosed with depression more than one year before had a slow improvement during all the visits. These two observations sustain the importance of recognizing depression and the initiation of the treatment from the beginning, which allow a good improvement of the functionality.
A good adherence to the treatment is a great contributor to the improvement of the symptomatology and thus, to recovering the level of functionality before the disease episode. No side effects related to the AD treatment were recorded according to the clinician’s judgement.
Considering that the medication was based almost exclusively on Agomelatine, the results of the study can be considered representative for this substance. In the same time, we cannot make specific correlations, the Chi test being extremely sensitive in big samples. Another limit can be represented by the short period of the study – 10 weeks, which can permit an observation of the evolution and the adherence only for the acute phase of the treatment. It was observed a good improvement of the functionality from the self-reported data by the patients. At the same time, it might be useful to make a correlation of the functionality with the symptomatology through the evaluation of the patient’s response at a self-administered scale for functionality.

5. CONCLUSIONS
The AD treatment with considered efficient and the MDE patients. After 10 weeks of treatment it has been noticed a good improvement of MDE patients’ symptomatology, a good adherence to treatment and a good improvement of the functionality from the self- reported data by the patients.
6. DISCLOSURE
The authors declare that received in the past grants from Servier Pharma and other speaker fees. In addition, all the authors received in the past speaker’s fees and/or sponsorship from Servier Pharma and others companies for scientific research or communication. Dr. Traian Purnichi also works as a marketing specialist consultant for Servier Pharma and Dr. George Paraschiv and Iulia- Alma Mitea are employees of Servier Pharma.
7. ACKNOWLEDGEMETS
All the authors had an equal contribution and have similar rights. All the authors approved the final version of this article.
The authors will like to thank:
-Cegedim Company that did the statistical analysis using a Kynos Modalisa software.
-MedinteractivPlus for helping on the study draft.
– Servier Pharma for offering the grant that made this study possible.
– The following doctors for assessing the patients included in this study: Ramona Baba, , Alexandrina Baloescu, Ciprian Bacila Magdalena Blaj, RuxandraBloj, Mihaela Brad, Magdalena Bujor, Ion Burlacu, IeronimBurghelea, Ana Campeanu, Liliana Chelariu, Angela Chelcea, R a i s a C i r l i g , Vi c t o r C o j o c a r u , D e l i a C o l t o i u , M i n o d o r a D u m i t r e s c u , C o r i n a – M i h a e l a E c h i m , L i v i u G a n e a , F e l i c i a G i u rg i , C a r m e n H a r a g u s , AncutaHordoan, CameliaHriban, Ioana Ilea, Sorin Iova, Bogdana Lazar, MinodoraManea, Auras Margina, LigiaMincu, Eli Morman, Eugenia ElzaMoruzzi, Eduard Motoescu, Ildiko Must, VioricaNancu, Laura Pacurar- Catana, Corina Panzaru, Ioana Papava, Rita Platona, Alina Pop, Cristian Popa, NeoniliaPopa, Elena Preda, Dan Prelipceanu, Eugenia Roca, Dan Rusu, HoratiuSalvan, Iulia Daria Scorei, Daniela Sichitiu, Lia Sonia Simon, Adina Singalevici, Rodica Stan, Luigya-Claudia Stanci, JeniStanciu, Izabela Stania, AncaTalasman, Livia Taran, Andreea Teodorescu, AlexandruTiugan, Mihaela Tranca, Silvia Trandafir, Corina Tudor, Monica Varlan, Claudiu Ionut Vasile, AndreiaVasilescu, Nicolae Vlad.

8. FINANCIAL SUPORT
This study was founded by a grant from Servier Pharma.