STIGMA, NEGATIVE ATTITUDES AND DISCRIMINATION TOWARDS MENTAL ILLNESS: STIGMA AS A PREDICTOR OF SERVICE ACCESS, TREATMENT AND SOCIAL INTEGRATION

Mental disorders have a high prevalence that is statistics with regards to mental disorders as important increasing, according to WHO mental disorders are causes of disability issued by the main world health among the leading causes of disease worldwide, accounting for around 6.2% of the total disease burden as authority, continues with the definition of stigma and reflecting on the attitude of the general public towards measured in DALYs1. People with mental illness are mental illness and the role of the media as a mediating subject to discrimination which impacts most areas of their lives2 3. These forms of social exclusion occur at home, at work, in personal life, in social activities, in healthcare and in the media4 5. The purpose of this paper is to reflect the impact of Stigma on people with mental illness related to access to psychiatric services, treatment and its consequences for the individual and society. From the literature review we will examine how stigma affected access to services, diagnosis and treatment of people with mental illness as well as the impact of stigma on some aspects of their lives. The article begins by overviewing the factor. It then looks at some of the practical implications of the discrimination and prejudice that arise out of stigma, particularly in respect of use of the health care system and the cost of not seeking help. Finally, an overview is provided on what is known to date about the effectiveness of different approaches that have been adopted or might in future be adopted to effectively tackle stigma.

According to the statistics issued by WHO, mental disorders such as depression, psychoses (e.g. bipolar disorder and schizophrenia), alcohol use disorders, drug use disorders, panic disorder, Alzheimer and other dementia are among the 20 leading causes of disability (Table 9). The pattern differs between the high income countries and the low- and middle-income countries6.
In all regions, neuropsychiatric conditions are the most important causes of disability, accounting for around one third of YLD (years lost due to disability) among adults aged 15 years and over, as it can be observed from the table above.
The disabling burden of neuropsychiatric conditions is almost the same for males and females, but the major contributing causes are different. While depression is the leading cause for both males and females, the burden of depression is 50% higher for females than males. Females also have a higher burden from anxiety disorders, migraine and Alzheimer and other dementias. In contrast, the male burden for alcohol and drug use disorders is nearly seven times higher than that for females, and accounts for almost one third of the male neuropsychiatric burden. In both low- and middle-income countries, and high-income countries, alcohol use disorders are among the 10 leading causes of YLD. This includes only the direct burden of alcohol dependence and problem use. The total attributable burden
of disability due to alcohol use is much larger7.
Despite the high prevalence of mental illness, the reality is that only a minority of those who would benefit from treatment for mental illness actually seek it and many of those who succeed to have access to services and get a diagnostic, discontinue treatment prematurely despite the severity of illness and its health, social and economic consequences. Unfortunately, mental health care services are often not available or are under-utilized, particularly in developing countries. In developed countries, the treatment gap (the % age of individuals who need mental health care but do not receive treatment) ranges from 44% to 70%; in developing countries, the treatment gap can be as high as 90%8. Common barriers to mental health care access include limited availability and affordability of mental health care services, insufficient mental health care policies, lack of education about mental illness, and stigma9. For example, only 34% of people with major depression in Finland seek professional help10. Similar results from other countries in Europe and the United States reveal the problem to be global11 12.
Until getting to the point of seeking help, an individual who experiences symptoms of a mental illness goes through a complex process. At first, if the symptoms are not acute, the person tries to understand them and to get an explanation of their origin. The extent to which the person gets to understand the symptoms relates to the level of education of the person, access to information, mental health literacy and/or exposure to people with mental health problems 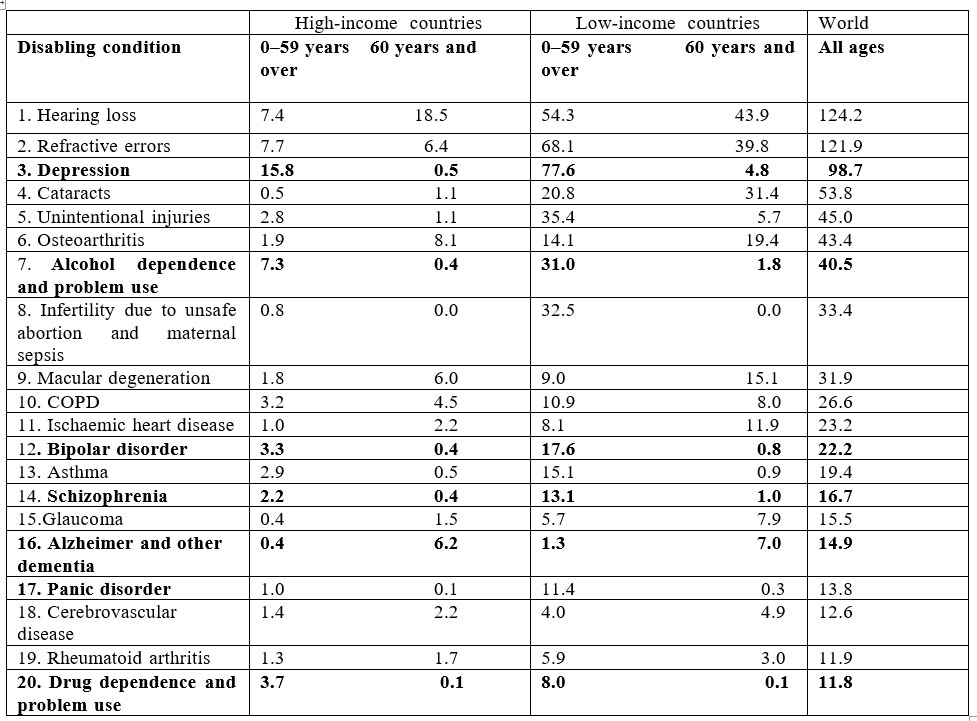 The next level is to evaluate the severity of the symptoms and their impact on the personal level of functionality, some of them eventually seek for at hand solutions that would give some temporary relief but, as the symptoms aggravate and the level of functionality decreases, the person takes more into consideration the costs and benefits of accessing a specialized mental health service13. One perceived cost to accessing mental health services might be the risk of stigma. It has been suggested that many people hesitate to use mental health services because they do not want to be labeled a “psychiatric patient” and want to avoid the negative consequences connected with stigma14.
But what is stigma? Stigma is a mark of disgrace that sets a person apart. When a person is labelled by their illness they are seen as part of a stereotyped group. Negative attitudes create prejudice which leads to negative actions and discrimination Stigma brings experiences and feelings of shame, blame, hopelessness, distress, misrepresentation in the media and most importantly reluctance to seek and/or accept help15.
In 2001, the World Health Organization (WHO) identified stigma and discrimination towards mentally ill individuals as “the single most important barrier to overcome in the community”, and the WHO’s Mental Health Global Action Program (mhGAP) cited advocacy against stigma and discrimination as one of its four core
strategies for improving the state of global mental health16 17.Stigma related to mental illness often comes from ignorance. At a time when there is an unprecedented volume of information in the public domain, the level of accurate knowledge about mental illnesses also called sometimes ‘mental health literacy’ is low18. For example, a population survey in England, found that most people (55%) believe that the statement ‘someone who cannot be held responsible for his or her own actions’ describes a person who is mentally ill19. Most of the respondents (63%) thought that fewer than 10% of the population would experience a mental illness at some time in their lives. A 2006 Australian study found that:
·nearly 1 in 4 of people felt depression was a sign of personal weakness and would not employ a person with depression
·around a third would not vote for a politician with depression
·42% thought people with depression were unpredictable
·one in 5 said that if they had depression they would not tell anyone
·nearly 2 in 3 people surveyed thought people with schizophrenia were unpredictable and a quarter felt that they were dangerous20
This ignorance needs to be redressed by conveying more factual knowledge to the general public and also to specific groups such as teenagers, including useful information such as how to recognize the features of mental illness and where to get help 21.
In developing and developed countries, limited knowledge about mental illness can prevent individuals from recognizing mental illness and seeking treatment; poor understanding of mental illness also impairs families’ abilities to provide adequate care for mentally ill relatives22.
Along with ignorance comes as a result the negative attitudes and prejudice. Fear, anxiety and avoidance are common feelings for people who do not have mental illness when reacting to those who have23. The reactions of people to act with prejudice in rejecting a minority group usually involve not just negative thoughts but also emotions such as anxiety, anger, resentment, hostility. It is evident that prejudice strongly predict discrimination. The evidence from scientific enquiry and consultation with service users gives a clear message: discrimination means that it is harder for people with a mental illness to marry, have children, work or have a social life. This social exclusion needs to be actively addressed because this is might be the reason for which a minority of people suffering from mental illness seek professional help for themselves. Stigmatizing attitudes are assumed to be one of the major barriers to help seeking.
Although the reasons for stigmatization are not consistent across communities or cultures, perceived stigma by individuals living with mental illness is reported internationally. For instance, the World Mental Health survey data, which included responses from 16 countries in the Americas, Europe, the Middle East, Africa, Asia, and the South Pacific, showed that 22.1% of participants from developing countries and 11.7% of participants from developed countries experienced embarrassment and discrimination due to their mental illness. However, the authors note that these figures likely underestimate the extent of stigma associated with mental illness since they only evaluated data on anxiety and mood disorders24.
A German study made in 2009 about the stigma of psychiatric treatment and help seeking intentions for depression25 found that with major depression, only 29-52% of those affected seek help during the first year of illness26. Contact to medical services is essential to initiate treatment and reduce the risk of suicide27. In Germany, the median duration of delay until treatment is initiated is 2 years28. Several socio-demographic and illness-related factors have been related to timely help-seeking for depression: women, young people, singles and those severely affected tend to seek help more readily than others29 30 31 32. Within the study, a focus group study with two focus groups comprising 17 patients treated either in a day-clinic or as in-patients, and addressing beliefs about attitudes and reactions of others towards those seeking psychiatric help. In these groups, their real life experiences of stigmatization for seeing a psychiatrist and also their fears and reservations prior to seeing a psychiatrist for the first time were discussed. Additionally, a convenience sample of 29 healthy adults answered a written questionnaire that started with a depression vignette and contained open-ended questions on possible negative consequences when seeing a psychiatrist for this problem and the written questionnaires were content analyzed33. Based on this analysis, a list of 16 items aiming at a comprehensive representation of the ideas voiced in all groups was compiled. Table 2 shows the item wording of the scale generated in this manner. Answers were recorded on a five-point Likert scale anchored with 1 = ”do not agree at all” and 5 = ”agree completely”. Low values thus represent low anticipated discrimination. 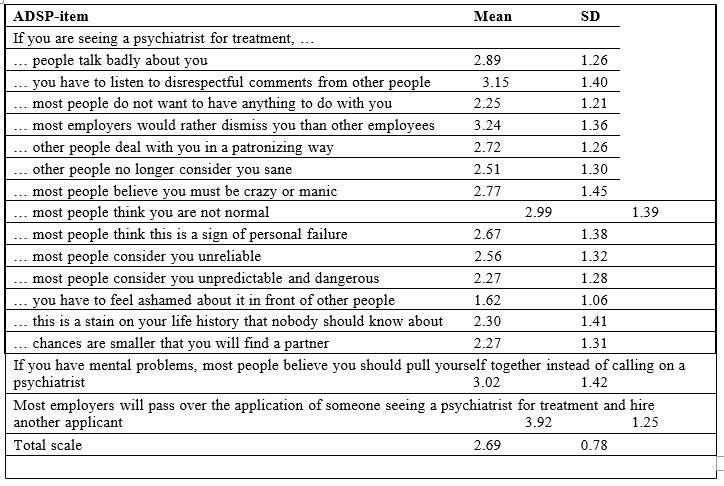