Depressive disorder represents the leading cause of disability worldwide. An increasing body of evidence suggests that patients presenting psychological distress and depression show alterations in immunological markers. The aim of our study was to observe the correlation of fibrinogen as a potential biological marker for psychological distress and depression. Data analyzed in this paper refers to patients (N=100) included in a prospective study conducted between 01 February-30 June 2016, males and females, age>18 years, recruited from the patients whom presented for diverse para-clinical evaluations in the outpatient clinic National Institute of Gerontology and Geriatrics “Ana Aslan” (NIGG “Ana Aslan”), Bucharest, Romania. Socio-demographic information collected included: gender, age, marital status, environmental origin, level of education, socio- economic status. For all the participants of the study fibrinogen was measured using a turbidimetry method. Psychological distress and depressive symptoms were evaluated using the Hospital Anxiety and Depression Scale (HADS). From the total number of patients 64% were female, with a mean age of 67 years, from the urban area (92%), retired (80%).We found a mean value of fibrinogen of 301.16 mg/dL (SD ± 63.20). At HADS-global the patients presented a mean value of 15.9 (SD ± 7.31), while at the HADS-D the mean value was 6.41 (SD ± 3.60). Low statistically significant positive correlations between fibrinogen and HADS-global ( rs(98)= .30, p= 0.0023) and HADS-D (rs(98)=.36, p=0.0003) were found. Our study results were consistent with the data literature reported from previous studies showing a significant positive correlation between psychological distress, depression and fibrinogen. Also, we found higher levels of plasma fibrinogen when we compared patients presenting psychological distress with those without psychological distress, even though the effect size was rather small.

Introduction
Depression is a pervasive, complex and heterogeneous disorder and represents the leading cause of disability worldwide in terms of total years lost due to disability (1). Current neurobiological theories are based on studies investigating psychosocial stress and stress hormones, neurotransmitters such as serotonin, norepinephrine, dopamine, glutamate and gamma-aminobutyric acid (GABA), altered neuro-circuitry function, altered hypothalamic-pituitary-adrenal axis activity, neurotrophic factors, and circadian rhythms (2). Several hypotheses concerning the biologically based cause of depression have been suggested over the years, including theories revolving around monoamine neurotransmitters, neuroplasticity, inflammation and the circadian rhythm (3, 4, 5). Immunological mechanisms have been implicated in the complex pathophysiology of depression providing leads for further investigation of the hypothesis considering that inflammation represents an important etiological factor of depression. Despite the fact that the exact disease mechanism is unknown, some previous studies have shown that low-grade inflammation possibly plays a role in the development of depression by indicating an association between depression and elevated inflammatory markers such as cytokines and acute phase proteins (6, 7, 8). Also growing evidence indicates that psychological distress is accompanied by activation of the innate immune system, resulting in increased monocyte production of the pro-inflammatory cytokines interleukin (IL)-6 and tumor necrosis factor (TNF)-α and upregulation of the acute phase response with increased synthesis of fibrinogen and C-reactive protein (9). Fibrinogen exerts pro-coagulant function as a precursor of fibrin in the coagulation cascade and as cofactor for platelet aggregation and also a major acute phase reactant synthesized by the liver during inflammation (10). Jensen et al. showed that fibrinogen stimulates synthesis of pro-inflammatory cytokines such as interleukin-6 and tumor necrosis factor-α from peripheral blood mononuclear cells, and hereby to increase levels of pro-inflammatory cytokines (11). These pro-inflammatory cytokines may activate the enzyme indolamine-2,3-dioxygenase, which degrades the precursor of serotonin, tryptophan (11). The decreased concentrations of tryptophan determine a reduced serotonin synthesis, which may lead to the development of depression (12, 13). As fibrinogen is the precursor of fibrin for production of thrombi, another possible hypothesis could be that increased fibrinogen levels could lead to increased risk of thrombus formation in vessels in the brain, that secondary may lead to psychological distress and depression. On the other hand another possibility is that psychological distress and depression could lead to increased fibrinogen levels. In several studies increased levels of depressive symptoms, and clinical depression, respectively, have been associated with elevated fibrinogen (6, 14, 15, 16), although others failed to find a significant association (17-21).
The aim of our study was to analyze if there is a correlation between the inflammatory markers like fibrinogen and depressive symptoms and if fibrinogen could be a potential biological marker for psychological distress and depression symptoms severity.

Material and methods
Data for present paper was obtained after an analysis of a prospective study conducted between 01 February – 30 June 2016, on a sample comprised 101 adult participants, males and females, aged over 18 years, recruited from the patients whom presented for various para-clinical evaluations in the outpatient clinic National Institute of Gerontology and Geriatrics “Ana Aslan” (NIGG “Ana Aslan”), Bucharest, Romania. Details of the study were explained to every patient and a written informed consent was obtained from all participants. The socio- demographic data collected included: gender, age, marital status, environmental origin, level of education, socio- economic status. Data about family history, pathological personal history, diagnosis of depressive disorder, symptoms at onset, number of hospitalizations for diagnosis of depressive disorder, previous antidepressant treatment, association with psychotropic medication, quality of response and side effects of medication, and somatic comorbidities were also collected. For all patients were recorded the following laboratory results: CBC, GGT, glucose, total cholesterol, triglycerides, TSH, fibrinogen, VSH, CRP and CRP-hs. All the participants required to complete the Hospital Anxiety and Depression Scale (HADS). HADS was designed to rate the symptom level of depression (HADS-D) and anxiety (HADS-A) and emotional distress in non- psychiatric populations (22). There are two subscales, each of which has seven items to rate depression (HADS-D) and anxiety (HADS- A) on a 4-point Likert scale (0 = not at all, 3 = mostly; range = 0–21 points). The recommended cut-off of ≥ 8 points to identify cases of elevated levels of anxiety and depression symptoms had a sensivity and specificity of both subscales consistently in the range of 0.70 to 0.90 (23). The approval for the HADS scale used was obtained. This study was approved by the I.O.S.U.D. U.M.F. Craiova ethical committee. We also had a collaboration protocol with the outpatient clinic NIGG “Ana Aslan”. For all participants in the study fibrinogen was measured using a turbidimetry method (Coa-DATA 2001- a 2 channel coagulation analyzer from Dutch Diagnostics). All measurements were done by laboratory technicians. The normal fibrinogen range is considered to be 200 to 400 mg/dL, although normal value ranges may vary slightly among different laboratories. Values above 400mg/dL were considered as a marker of inflammation. In the final analysis entered only 100 participants because the scale for one patient got lost. 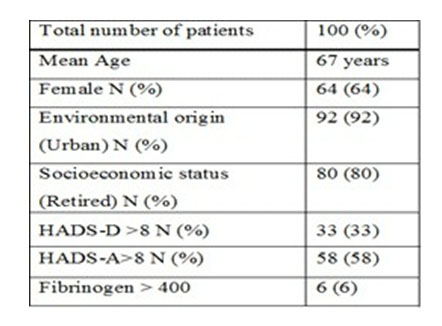 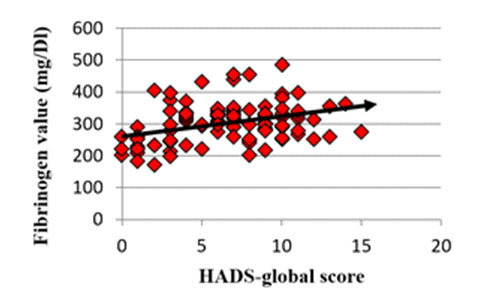 Discussions:
In this study we analyzed the relationship between fibrinogen as a biological marker and psychological distress and depressive symptoms. Although the main limitation of this study remains the small sample size, we found a statistically significant low positive correlation between depressive symptoms and elevated plasma fibrinogen. Also we found a statistically significant low positive correlation between elevated plasma fibrinogen and psychological distress. Comparing the two groups of patients that we created (“distress” and “non-distress” group) we observed a statistically significant higher level of fibrinogen in patients with psychological distress. However, the effect size was rather small (r=0.364). Our study results are consistent with the data reported from previous studies in literature showing a significant positive association between depression and fibrinogen. As a heterogeneous disorder presenting a wide range of symptoms, the treatment success of depression varies among patients. Some studies showed that high plasma fibrinogen levels were associated with a poor antidepressant response and indicated an elevated inflammatory status present at non-responders (27). Geiser et al. found decreased fibrinogen levels in patients treated with serotonergic antidepressants compared to patients without use of serotonergic antidepressants and healthy controls (28), although others did not find that use of antidepressants in general was associated with decreased fibrinogen levels ( 16). Also, some suggest that MDD patients with increased inflammatory protein levels tend to be treatment resistant (29).
The potential clinical implication of fibrinogen as a predictive response marker in the case of antidepressant resistance would be that those specific patients could be subjected to medication that modulates fibrinogen levels before starting drug treatment to increase the likelihood of response. If further studies will confirm the putative use of fibrinogen level in resistant depressed patients it may be possible to better manage these patients by not exposing them to lengthy antidepressants trials but rather to use also other therapeutically methods.