Introduction
At present the sexual dysfunction is a widespread phenomenon among the general population: about 43% of women and 31% of men suffer from sexual disorders of different severity. (1).
According to the medical statistics, there were 11259 patients with drug addiction in the Republic of Moldova in
2016, and 3721 of them are injecting drug users (2). In 2002, the first pilot-project of substitution treatment with buprenorphine of the heroin-dependent patients was launched in the Republic of Moldova. Since 2004, the programme of methadone substitution therapy (MST) has been running in Moldova. By today (31.12.2016), 1662 addicted patients have received methadone.
Heroin addiction is not only a social, legal, economic, political problem, but also a sexual one. The patients taking part in MMT programme often complain of decrease of the sexual desire and the lack of a sexual life. This is undoubtedly related to the disruptive effect of the heroin on the hypothalamic-pituitary-gonadal axis, leading to an imbalance in the endocrine system (3): men suffer from an erectile dysfunction, women – from menstrual irregularities. Therefore, heroin addicts often resort to amphetamine-type stimulants to maintain the elements of their sexuality. We have noticed that the desire to improve family relationship is a frequent motivation for applying for the MMT treatment programme.
By its origin, the methadone is a synthetic opioid agonist to the opioid receptors and it has similar pharmacological effects with heroin (4), but differs from it in the duration of action. Methadone is a long-acting opioid (5) with the duration of action of 24-36 hours (6,7,8), while heroin (diacetylmorphine) is a short-acting opioid, the duration of its action is 6 hours (9,10).
Materials and methods
The research involved 20 patients (15 men and 5 women) suffering from heroin addiction and ongoing a methadone maintenance therapy (MMT) in the drug treatment clinic. They voluntarily accepted to participate in the study. 20 people completed the study, so no one was eliminated, no one left the programme. The inclusion criteria were: heroin addicted patients who have been under MMT for at least 2 months, the existence of a temporary or a permanent sexual partner at the time of the research.
The questionnaire included two main parts: the objective data and the subjective experiences. The objective data contain information about the age, the duration of MMT, the dose of methadone. The subjective experiences include the changes in the sexual status before and after the MMT (better / worse / no change), the attitude towards the current sexual function (worried / not worried).
The clinical sexology study was conducted by means of the ASEX-scale (Arizona Sexual Experience Scale) – a special questionnaire which allows to obtain detailed information about the status of the sexual sphere. The questionnaire includes five questions, each estimated from 1 to 6 points by the Likert scale. In total, it is possible to get from 5 to 30 points, the more points the patient gets, the more pronounced sexual dysfunctions he has. The
number of points ≥ 21 for women and ≥ 20 for men
c o r r e s p o n d s t o a c l i n i c a l l y d e t e c t a b l e s e x u a l dysfunction;15-20 points for women and 11-19 points for men indicate the boundary disorder of the sexual function;
≤ 14 points for women and ≤ 10 points for men mean the
absence of a sexual dysfunction. At the same time the sexual dysfunction scale was used for the comparative evaluation of the patients taking different doses of methadone. The problems connected with the consumption of alcohol, tobacco and drugs were detected by ASSIST V3.0 (The Alcohol, Smoking and Substance Involvement Screening Test), which is a short questionnaire for the screening of the psychoactive substances abuse. We used it to identify the abuse of psychoactive substances during the treatment with methadone. The statistical analysis was performed using the statistical calculator Microsoft Windows version 6.1and the software Student Test (test t-Student). The threshold of the statistical significance is the value p<0.05. No comorbidities were diagnosed. At the same time, at the beginning of the treatment, the patients were requested to warn the researchers, if other medication was administered.
The results
On the basis of the data obtained by means of WHO- ASSIST V3.0 scale, we have concluded that 19 patients (95%) completely have given up using heroin, seven patients (35%) still abuse alcohol, 2 people (10%) use marijuana, 3 people (15 %) – cocaine and 1 person (5%) – amphetamine. All patients are heavy smokers.
As Table 1 shows, against the background of the methadone maintenance treatment, the number of patients suffering from the deterioration of their sexual function is higher than the number of those ones whose sexual functions have improved (p ˃ 0,05). The duration of MMT is longer and the daily dose of methadone is higher in the group of the patients whose sexual functions worsened (p
˃ 0,05).There is no significant age difference between the two groups (p ˃ 0,05).
Over the half of the patients (60%) have not expressed any worries about their present sexual functioning, in their case the daily dose of methadone (p ˃ 0,05) is lower than the dosage of those patients who have expressed concerns. At the same time, the patients who are worried about the sexual function take the methadone treatment of longer duration (on average- 5 months or longer) (p ˃ 0,05).
The score by the ASEX scale was 14,13 ± 2,85 for men and 15,6 ± 2,88 for women (t = 0,36, p ˃ 0,05), although men complained of sexual weakness, but women did not express such complaints at the time of the interview. Perhaps, it can be explained by gender differences: women tend to satisfy their partner, hiding their sexual lethargy, while men shun or reject the partner, fearing the failure (11). According to the ASEX scale, 5 patients (25%) have not expressed any signs of the sexual dysfunction, 14 patients (70%) have observed some disorders of the sexual functioning, and only one man (5%) has suffered from sexual dysfunction. (Chart 1). 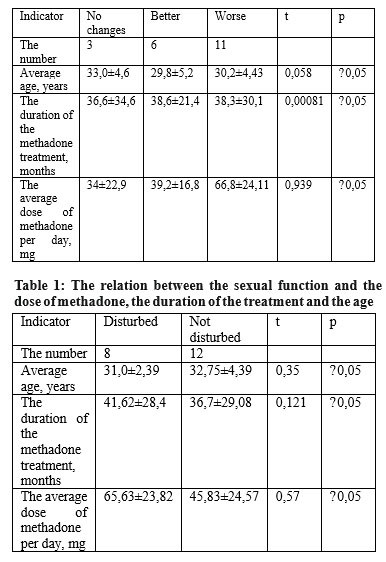 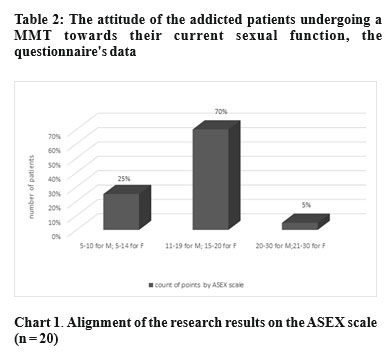 As Chart 2 shows, the sexually active patients taking MMT have observed the failing of the sexual desire (3,25 ± 1,06 points Likert) and problems with achieving orgasm (3,0 ± 0,85 points Likert). Despite it, their orgasm satisfied them (2,6 ± 0,99 points Likert). It should be noted that, in response to a question about the sexual desire, the patients also complained of the lack of appetite and initiative. The lack of the desire or of the motivation to do something dominated the patient’s mind, and the problem of libido was not strongly pronounced against this background. 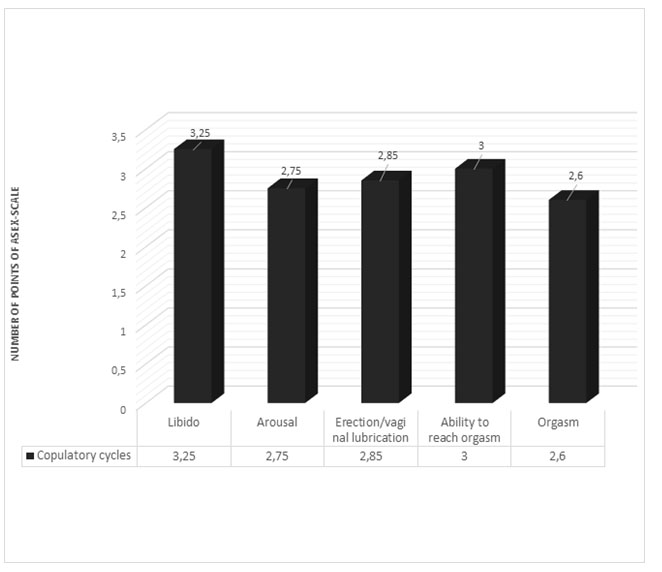 Discussion
The unhindered sexuality plays an important role in the quality of life and this is also true for the patients with psychiatric illnesses (12). The individual complex therapeutic strategy for the patients with opioid dependence should be directed to improving the quality of life (13). The medication-based strategy of treating the opiate dependence by the administration of methadone causes sexual dysfunction in many cases (12). Most clinicians avoid asking the patients questions of a sexual nature (14). Discussing the sexual dysfunction induced by medication is crucial for the patients’ adherence to the treatment (12), as the presence of a sexual dysfunction may provoke a risk of returning to heroin abuse (11,14). The spectrum of the sexual dysfunctions in the patients receiving MMT is mainly represented by the erectile dysfunction, the fade of the libido and the inability to achieve the orgasm. Some research also describe the disorders of all the aspects of the sexual activity – a global dysfunction (15,16,17,18). The recent data predominantly point out the suppression of the libido (libido inhibition)
and the reduced sexual pleasure (decreased sexual pleasure) (11). Neurophysiologists speak about different levels of disorders: central – the limbic system where the sexual desire or the libido is formed, and peripheral – the spinal cord where there are spinal erection centres that ensure the mechanical aspect of the intercourse. Erectile dysfunction is highly prevalent among men abusing opioids (19,20) but the level of testosterone is not low in all cases.(16). Some researchers explain it by the hypogonadism and the depression (17,18). The androgenic treatment of such patients is not very effective (21). The erectile dysfunction significantly depends on the duration of the Methadone therapy and the Methadone daily dosage (18). On the other hand, a number of studies show no correlation between the duration of the methadone treatment and sexual disorders (22), but a dependence of the latter on the dose of the drug (15,22). So, a lot of criticism against MMT and conflicting data can be found in the specialised medical literature.

Conclusions:
Methadone has an effect on the sexual function. High doses suppress the sexual desire, delay the ejaculation and prevent the achievement of orgasm. The average doses do not cause such changes.
During the treatment with methadone, the problems related to the sexual dysfunction, caused by the abuse of heroin, get smoothed: the discontinuation of heroin consumption enables the recovery of the sexual function, and the methadone helps the patient to improve the quality of life, eliminating the painful withdrawal phenomena.