INTRODUCTION
Autism affects an increasing number of people all around the world. In 1997 in Great Britain, the prevalence was estimated at 7,2/1000 children between 3 and 15 years old, and in 2006, one study on children aged 0-15 years old reported a prevalence of 44,2/10000 (1). In 2014, in the United States of America, the Center for Disease Control reported a prevalence of 1/68 children aged up to 13 years old (2). It is estimated that 1% of the planet’s population is affected by autism (3).
The increasing global incidence of this disorder incites a great interest among professionals, who are looking for causes and more precise methods of symptom identification, as well as treatment solutions, through psychological interventions or medication. Autism spectrum disorder is a neurodevelopmental disorder characterized by deficits in social interaction, verbal and non-verbal communication and the presence of restrictive and repetitive behaviors (4). In reality, the symptoms of autism are very rarely confined to those mentioned above, as it usually is associated with other comorbid disorders. There are many more domains that are affected, and they usually are correlated. In one study, 55% of children with ASD from the sample had an IQ below 70 (intellectual disability), 17% had an IQ between 70 and 85, 28% had an average IQ, and 3% had an IQ that was above average (5). It is estimated that eating disorders affect 70-90% of children on the autism spectrum (6). Another study shows that 52% of the children participating in a study of facial recognition met the criteria for a comorbid diagnosis of ADHD (7). The impairment in these clinical and psychological domains in children with ASD affect identification, evaluation and intervention. Recently, a series of specific behavioral interventions have been developed to improve cognitive, social, self-help, language and communication, emotional processing and self-control domains (8). A series of studies researched the efficacy of numerous therapies and interventions in public or private therapy centers around the world. They show that early intensive interventions based on applied behavior analysis significantly improve the lives of children with autism, especially when it comes to cognitive, communication and repetitive behavior domains (9). This type of intervention involves more than
15 hours per week of direct work with the child in one-to- one sessions, targeting many areas of development from very young ages- 1,6 or 2 years old. Some interventions address specific symptoms – reducing anxiety or disruptive behaviors- others focus on developing language and communication skills or direct interaction and socialization. In the literature the most efficient interventions for children with autism are: Applied Behavior Analysis, Incidental Teaching, Pivotal Response Treatment, Treatment and Education of Autistic and Related Communication Handicapped Children (TEACCH). These are called EIBI (Early Intensive Behavior Intervention) (10).
In trying to understand why some children improve and others do not and what are the important factors for the progress in therapy, the following variables have been measured : age, severity of ASD symptoms, IQ, comorbid disorders, and the adaptive functioning (11)(12). Some researchers report that the symptom severity and IQ influence the adaptive functioning at different ages, which is a predictive factor of independency as a young adult and of therapy success (13).
In this paper, we aim to analyze the progress of a group of children, shown through standard psychological testing specific for ASD , while accounting for the clinical variables that have been shown to have a major influence on the efficacy of therapy for children with autism spectrum disorders.
MATERIALS AND METHODS
The research was conducted between 2014-2017 on a sample of 116 children aged between 2 and 5 years old, diagnosed with autism by a specialist in Child Psychiatry in the public healthcare system. Moreover, o t h e r c o m o r b i d i t i e s w e r e a c c o u n t e d – A D H D , hyperkinetic disorder, intellectual disability – IQ lower than 70.
The ASD symptoms and their severity were evaluated with ADOS-G Modules 1 and 2 (Lord, Rutter, DiLavore, Risi, 1999) at intake and after 2 years of intensive therapeutic intervention. ADOS is a semi- structured instrument that can be used to evaluate autism symptoms, from non-verbal children to verbally fluent adults. ADOS is based on the operationalization of d i a g n o s t i c c r i t e r i a f o r a u t i s m a n d p e r v a s i v e developmental disorders from DSM-IV/ICD-10. Scores for social interaction, communication and repetitive behaviors, as well as total scores were calculated and used as a measure of the severity of ASD symptoms. Based on these, statistic analysis was carried out to calculate the progress of each child after 2 years of therapy, as well as the means, standard deviations, correlation coefficients, etc.
Children received 15 h/week of early intensive behavioral therapy (EIBI) based on modern ABA and other approaches recommended by scientific evidence as being effective in children with autism : Pivotal Response treatment, Incidental teaching, Early Start Denver Model. The one-to-one intervention was held in a controlled environment, with the same coordinator and with a child centered curriculum, including all the specific developmental domains.
RESULTS
After 2 years of EIBI therapy, the statistical analysis of ADOS-G scores on the entire sample showed a mean decrease of 2,98 points in the total score, with a standard deviation of 1,588. From the sample, 97,4% of children had the ADOS total scores decreased, while 1,72% of scores remained the same and 0,86% (1 child) had an increase in the total ADOS scores (a total score of 8 at the initial evaluation and a total score of 9 at the 2 year evaluation). For 14 of the children, the decrease was so significant that after the reevaluation, they did not meet the criteria for the autism spectrum anymore. The statistical analysis of the ADOS total score for the complete sample is shown in Fig. 1.

The children were split into two groups – according to their scores and the severity of their symptoms- one group that fit the criteria for the autism spectrum disorder and one group that fit the diagnostic criteria according to DSM IV. There were 37 children in the ASD group, with a mean decrease in the ADOS total score of 2,81 and a standard deviation of 1,561. In the autism group, there were 79 children, with a mean decrease in the total score of 3,06 points.
The total scores of the two groups according to the severity of ASD symptoms and the frequency of their decrease is shown in Fig. 2 and Fig. 3, respectively.
A variable that is frequently found in the literature as a factor that influences the child’s progress and therapeutic success is the presence comorbidities. The most common comorbid conditions are ADHD and hyperkinetic disorder, which is true for our sample as well. Fifty four (46,5%) children had this type of comorbidity. We compared the group with these disorders to the group that did not have these conditions in regards to the decrease of ADOS total score after 2 years of EIBI therapy. We found no significant difference between them (p = 0,59). The results are shown in Fig 4. 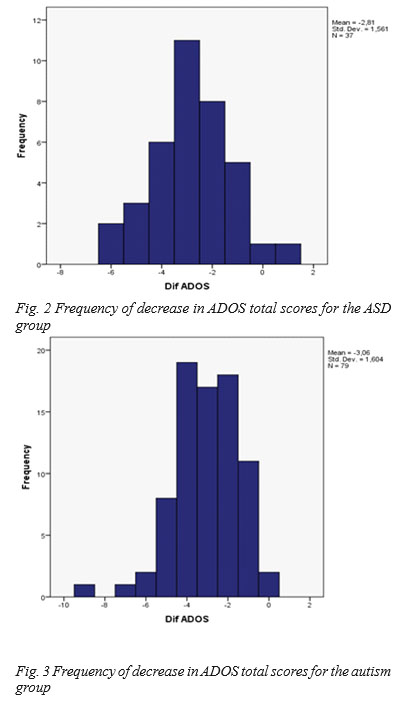 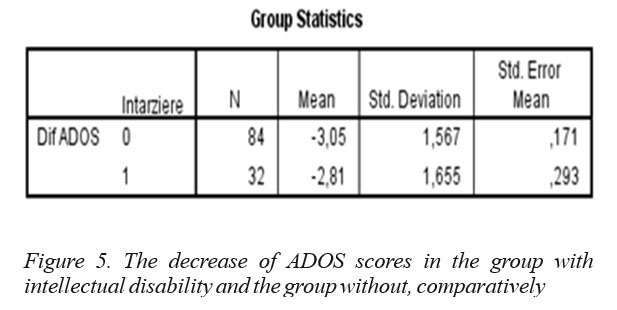 In regards to age, because the age group was small (2-5 year olds), we did not find any statistically significant correlation between the age at intake and the decrease of ADOS total score (p = 0,828).
CONCLUSIONS
After 2 years of early intensive behavioral intervention, the ADOS total scores of 97,4% of the children from the sample decreased significantly, and just
2,6% remained unchanged or increased. The presence of comorbid disorders, such as ADHD or hyperkinetic disorder did not significantly influence the progress of children in the recovery process, and neither did intellectual disability or age, which were not associated with a statistically significant increase or decrease of ADOS total scores. The decrease of ADOS total score regardless of other disorders or age signifies a decrease in the severity of ASD symptoms and an improvement of their mental state on many developmental domains.
In our sample, the comorbidities did not influence the therapeutic progress. Also, therapy starting age did not influence the therapeutic progress. This proves the efficiency of EIBI therapies for any category of affected children and encourages the beginning of a therapeutic program independently of the severity of the disease or the associated pathologies.
For a better understanding of the factors that influence the process of recovery through intensive therapy, correlations with other scores from tests that evaluate specific areas in social and cognitive evolution are necessary (for example, ABAS for evaluating adaptive behavior, ASRS, ADI-R, etc).
CERTIFICATION
The authors report no conflict of interest in the development of this research.
REFERENCES
1.Elsabbagh M, Gauri D, Koh Y, et al. Global prevalence of autism and other pervasive developmental disorders, Autism Res 2012; 5: 160-179.
2.McCarthy M. Autism diagnoses in the US rise by 30%, CDC reports, BMJ 2014;348
3.De Rubeis S, Buxbaum JD. Recent advanced in the genetics of autism spectrum disorder, Current neurology and neuroscience reports, 2015, 15(6):1-9.
4.Kim SK. Recent update of autism spectrum disorders, Korean J Pediatr, 2015, 58 (1): 8-14.
5.Charman T, Pickles A, Simonoff E, Chandler S, Loucas T, Baird G. IQ in children with autism spectrum disorders: Data from the Special Needs and Autism Project (SNAP). Psychological Medicine. 2011 doi:10.1017/S003329171000099.
6.Schreck KA, Williams K. Food preferences and factors influencing food selectivity for children with autism spectrum disorders, Res Dev Disabil. 2006;27(4):353–363
7.Sinzig J, Dagmar M, Gerd L. Do hyperactivity, impulsivity and inattention have an impact on the ability of facial affect recognition in children with autism and ADHD?, European Child & Adolescent Psychiatry, 2008 (17): 63-72.
8.Ospina MB., Krebs-Seida J, Clark B, et al. Behavioral and developmental interventions for autism spectrum disorder: a clinical systematic review. PloS ONE, 2008; 3(11), e3755.
9.Weitlauf A, McPheeters ML, Peteres B, et al. Therapies for children with autism spectrum disorder: behavioral interventions update, Comparative effectiveness review. no. 137, AHQR publication no. 14- EHC036-EF, 2014.
10.Fava L, Vicari S, Valeri G, Délia L, Arima S, Strauss K. Intensive behavioral intervention for school-aged children with autism: UNA BRECCIA NEL MURO (UBM)- A comprehensive behavioral model. Research in autism spectrum disorders, 2012 (6): 1273-1288.
11.Kenworthy L, Case L, Harms MB, Martin A, Wallace GL. Adaptive behavior ratings correlate with symptomatology and IQ among individuals with high-functioning autism spectrum disorders. Journal of Autism and Developmental Disorders. 2010 doi:10.1007/s10803-009- 0911-4.
12.Lopata C, Fox JD, Thomeer ML, et al. ABAS-II ratings and correlates of adaptive behavior in children with HFASDs. Journal of Developmental and Physical Disabilities. 2012 doi:10. 1007/s10882- 012-9277-1.
13.Hill Trenesha H, Sarah A. Gray, Jodi L, Kamps R, Varela E, Age and adaptive functioning in children and adolescents with ASD: the effects on intellectual functioning and ASD symptoms severity. J Autism Dev Disord, 2015, 45(12):4074-4083.