Alcohol related disorders represent a frequent pathology in psychiatry, one of these being alcohol withdrawal. There are not enough studies in order to certainly say that we can characterize these patients from a social and administrative point of view. Objectives: The purpose of this research was to study the social and administrative characteristics of patients with alcohol withdrawal in a Romanian sample. Methods: There were 2460 patients diagnosed with an alcohol related psychiatric disorder out of which 888 presented with alcohol withdrawal at the emergency room in ”Alexandru Obregia” Psychiatric Hospital from Bucharest during 1st of January 2017 and 31st December 2017. Results: Out of all patients, 68.8% had a discharge diagnosis of alcohol dependence and 31.2% of alcohol abuse, 43% of patients came alone at the emergency room and the most frequent admission diagnosis was alcohol intoxication. Amongst the patients admitted with alcohol withdrawal syndrome 36.49% developed complicated withdrawal symptoms and 89.79% of these were transferred from another hospital. We found that patients presenting with alcohol withdrawal had longer hospitalization periods, were usually transferred, lacked aggressive behavior at admission and almost half of them were uninsured. Moreover transferred patients were at a higher risk of developing complicated withdrawal than patients presenting alone or brought by ambulance. C o n c l u s i o n s : T h e re a re n u m e ro u s s o c i a l a n d administrative factors that characterize the patient presenting with alcohol withdrawal but more studies are needed in order to fully elucidate the degree of implication of each factor.

INTRODUCTION
Alcohol related disorders are some of the most frequent disorders diagnosed in psychiatric hospitals which also implies a higher cost of health services needed to treat them. One earlier study (1) showed that the cost per patient for detoxification from alcohol was between 3 319$ and 3 665$. A study (2) of 817 admissions in a hospital from Cluj reported an annual hospitalization cost for these disorders of about 562 794 Euros, ranking third in position after psychotic disorders and major depressive disorder. The World Health Organization (WHO) shows (3) that in the population of Romania the medium alcohol consumption was 10.4 L of pure alcohol per capita over 15 years old during 2008-2010, showing an increase in consumption compared to 2003-2005 when it was 8.8 L per capita. About 50% of the alcohol used is beer, followed by wine – 29% and spirits – 21%. The prevalence of alcohol induced disorders in both genders in 2010 was about 2.4% compared with the rest of WHO European region where the prevalence was 7.5%.
We already know some of the risk factors for developing alcohol withdrawal from literature (4) such as: frequency of abuse, quantity of alcohol drank, the presence of another medical disorder, family history and patient history of alcohol withdrawal, but the social and administrative factors are not yet fully understood. In addition, unlike other health care systems, in Romania, alcohol withdrawal is treated almost exclusively in psychiatric hospitals and therefore, we had access to the majority of patients with alcohol withdrawal, making the results of our research more generalizable.
The risk factors for developing complicated withdrawal (5-7) are: chronic alcohol use, history of delirium tremens, age over 30 years, presence of a somatic disease, presence of withdrawal symptoms in spite of a high blood alcohol level and a longer period of abstinence. Complicated withdrawal is defined as somatic (presented further) or psychiatric (delirium, alcoholic hallucinosis) consequences linked to imbalances caused by the withdrawal itself. Severe (or complicated) alcohol withdrawal syndrome is associated (8, 9, 10) with electrolyte and hydric imbalance which can lead to arrhythmias, seizures, cardiac insufficiency and rhabdomyolysis which at endpoint raise the risk of death in these patients.
In this article we will examine the social and administrative factors which are present in a Romanian sample of patients diagnosed with alcohol withdrawal. All this data can offer us a partial profile of a patient with alcohol withdrawal in order to raise caution when dealing with such cases and better understand which patients with alcohol related psychiatric disorders are at risk of developing alcohol withdrawal, which represents a serious medical emergency. Definitively more studies are needed for a more complex profile so that we can be able to better predict which patients will develop complications of withdrawal and what the best course of action is during hospitalization.
METHODS
A non-randomized observational retrospective study was conducted in the “Prof. Dr. Alexandru Obregia” Psychiatric Hospital with a data base of 19563 patients out of which 2460 met the diagnostic criteria of an alcohol use disorder and 888 of them were admitted with alcohol withdrawal during 01.01.2017-31.12.2017.
The data was compiled and analyzed using IBM SPSS Statistics 20. For the variables with abnormal distribution we used the Mann-Whitney U test and for the categorical values we calculated the frequencies and then we applied the Chi Squared test. P values below 0.05 were considered statistically significant. For this study we had the approval of the Ethics Committee of “Prof. Dr. Alexandru Obregia” Psychiatric Hospital.
RESULTS
From a total of 2460 patients included, 68.8% (n=1692) had, either a primary or a secondary, diagnosis of alcohol dependence and 31.2% (n=768) or of alcohol abuse. Of all patients, 42.93% (n=1056) came alone at the emergency room and the most frequent admission diagnosis was alcohol intoxication (53%, n=1308). The primary discharge diagnosis of alcohol related disorder represented 22.72% (n=559) of all the patients discharged in 2017 from “Prof. Dr. Alexandru Obregia” Psychiatric Hospital, being surpassed by personality disorders (26.3%) and major depressive disorder/recurrent depressive disorder (43.96%). Amongst the patients admitted with alcohol withdrawal syndrome, 36.49% (n=324) developed complicated withdrawal symptoms and 89.79% (n=265) of these were transferred from another hospital.
All the discharged patients often presented either psychiatric or non-psychiatric comorbidities like: alcohol dependence (n=1467, 59.63%), personality disorders (n=395, 16.05%), epileptic seizures (n=217, 8.82%), c e r e b r a l a t r o p h y ( n = 5 2 , 2 . 1 1 % ) , a l c o h o l i c polyneuropathy (n=85, 3.45%), type II diabetes (n=145, 5.89%), chronic hepatitis C (n=45, 1.82%), pancreatitis (n=28, 1.13%) alcoholic liver disease (n=799, 32.47%), vitamin B group deficiency (n=1106, 44.95%), hyperlipidemia (n=477, 19.39%), hydric and electrolytic imbalance (n=97, 3.94%), cardiovascular disease (n=61, 2.47%) and anemia of all causes (n=121, 4.91%).
Out of the total patients with alcohol withdrawal 70.27% were medically insured meanwhile only 55.55% of all the patients admitted with complicated withdrawal were ensured.
Our results showed that patients who presented complications of withdrawal syndrome spent more days in the hospital compared to patients without complications, representing a medium of 11 days compared to 8 days (p=.002, r=.219). The total admission number of patients presenting with alcohol withdrawal (Mdn=2) differed significantly from those who did not present with withdrawal (Mdn=5).
There was a 15.4 times higher risk of patients presenting without withdrawal symptoms to be aggressive than patients presenting with alcohol withdrawal (p<.000, as shown in Table 1), with 68 patients not presenting aggressive behavior compared to 3 who were aggressive. 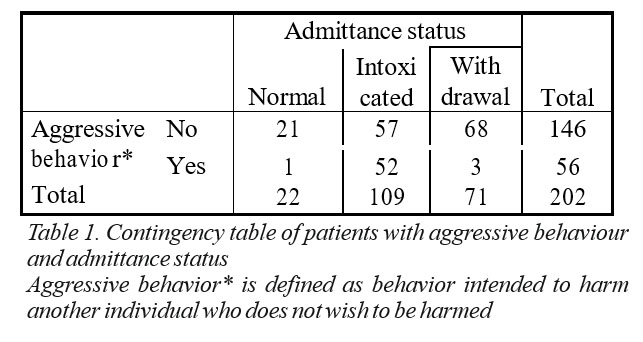 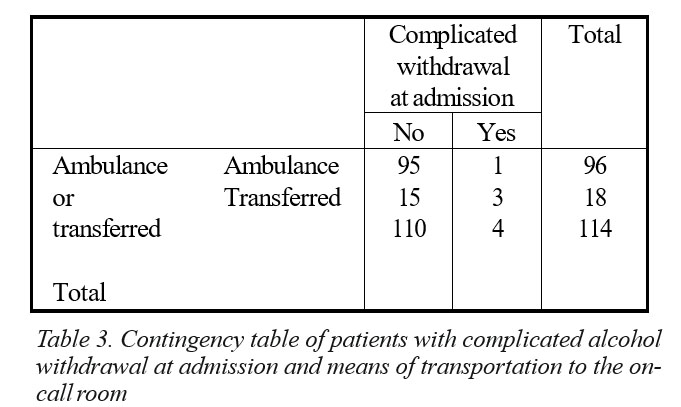 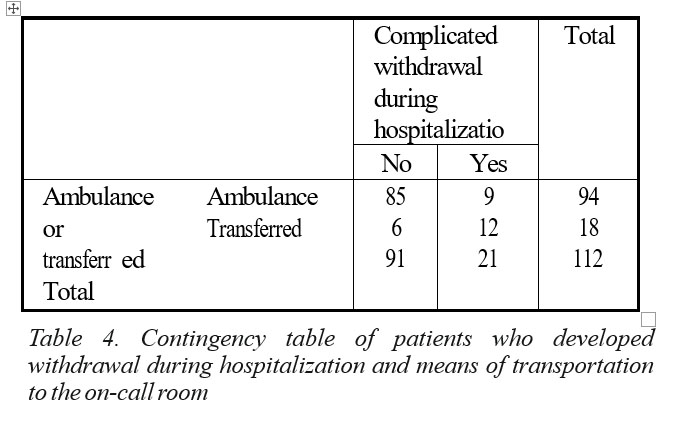 CONCLUSION
Alcohol related disorders are common in our hospital. One of the most difficult entity to deal with is complicated alcohol withdrawal because of the high risk of mortality secondary to physical complications. The cost of managing such cases is rather high because patients often need consults from other specialists, non-voluntary admittance and transportation by ambulance and police squads. Most of the patients were not medically insured nor employed.
What is more, alcohol related disorders either as a primary or secondary diagnosis increase the number of days spent in the hospital. In these cases, primary prevention is not to be overseen and it is of great importance that we streamline the approach of alcohol related disorders.