HIGH CREATINE KINASE IN A PSYCHIATRIC PATIENT WITHOUT ANTIPSYCHOTIC TREATMENT

In psychiatry, high creatine kinase (CK) levels and leukocytosis are known to be associated with neuroleptic malignant syndrome (NMS), (1,2) but there are many other causes that can present with an elevated serum level of this enzyme. CK is affected by age, gender, race, but also by many other diseases such as myocardial infarction (elevated CK-MB fraction), neuromuscular diseases, periodic paralyses, muscular traumas and high physical effort, elevated CK being a sign of rhabdomyolysis. We present a case of a 34-year- old male with spastic tetraplegia, mental retardation and alcohol dependence admitted in Alexandru Obregia psychiatry hospital in Bucharest, who presented a very elevated CK level (over 28000 units) at admission although no neuroleptic treatment was administered.

BACKGROUND: Creatine kinase is a nonspecific parameter, an elevated level indicating rhabdomyolysis. In psychiatry, high creatine kinase (CK) levels and leukocytosis are known to be associated with neuroleptic malignant syndrome (NMS), (1) but there are many other causes that can present with an elevated serum level of this enzyme. CK is affected by age, gender, race, but also by many other diseases such as myocardial infarction (elevated CK-MB fraction), neuromuscular diseases, periodic paralyses, muscular traumas and high physical effort. High CK levels were also shown in marathon runners (over 4000 units) post-race. (2,5)
We present the intriguing case of a 34-year-old male admitted in Alexandru Obregia psychiatry hospital on
21.04.2017 for alcohol withdrawal. He had a long history of chronic alcohol abuse and was suffering from epilepsy with generalized tonic-clonic seizures on the background of spastic tetraplegia and mental retardation due to perinatal cerebral hypoxia. He presented a very elevated CK level (over 28 000 units) after admission, although he wasn’t under any neuroleptic treatment and had no history of trauma, physical effort or other diseases. It proved to be a very intriguing case for us, because the other blood parameters weren’t highly modified, except liver enzymes. He was hospitalized for 3 weeks, during 21.04.2017 and 19.05.2017, and was discharged with normal blood parameters and CK level within physiologic limits.

HISTORY: The patient is brought to the on call room on 21.04.2017 at 8:30 pm by his mother for irritability, irascibility, emotional lability, auto-aggressive tendencies, verbal and physical hetero-aggressive outbursts towards his mother, psychomotor agitation and tremor of extremities in the context of abusive alcohol consumption (beer and brandy) and treatment non compliance (he was occasionally administered 1 tablet of 10 mg Diazepam by his mother).
The patient has been consuming alcohol daily for over 10 years with many admissions in the past for alcohol withdrawal symptoms. He is a smoker (1 and a half pack per day), suffering from epilepsy with tonic-clonic seizures and spastic tetraplegia since birth, due to perinatal cerebral hypoxia, and slight mental retardation (IQ=60). He was living with his mother, receiving a disability pension since 1995, never worked, not married, without children.
The physical examination at admission, in the on call room shows a conscious underweight patient with erythematous face and palms, scleral jaundice, diaphoresis, tremor of extremities, normal heart and lung sounds, tachycardia (120 bpm), arterial pressure of 150/100 mmHg, no pain at abdominal palpation, liver 2 cm below inferior costal margin and exaggerated deep tendon reflexes in all four limbs (spasticity).

PSYCHIATRIC AND PHYSICAL EXAMINATION: was performed on 24.04.2017 when the patient arrived on the ward. It revealed a conscious and partially co operant patient, oriented in time and space, autopsychic and allopsychic oriented, visual and psychic contact difficult to start and maintain, stereotypical mimic and gesture, expressive asymmetric facies, spontaneous and voluntary hypoprosexia, no affirmative perception disturbances, retro-grade amnesia, dysarthria, bradylalia, slow rate of speech, absent spontaneous speech. Autolytic ideation and delirium were absent. His hygiene was poor, he presented low appetite, mixed insomnias and impaired insight.
The physical examination at this date showed generalized tremor, oro-facial dyskinesia, scleral jaundice, tachycardia (100 bpm), low blood pressure (88/58 mmHg), dry skin, no fever, no signs of meningeal irritation, no edema, normal heart and lung sounds.
PARA CLINICAL EXAMINATION: first blood tests were taken on 24.04.2017. No earlier tests were made because the patient was admitted on a Friday night and spent all weekend in the on call room in a stable state, the hospital laboratory being closed during weekends. He was transferred in the ward on April 24. The evolution of the abnormal blood parameters is shown in the table 1 below, throughout all hospitalization period. The patient presented very high creatine kinase (28597 units), which return to normal after several days, on 08.05.2017. His liver enzymes were also increased, with very high GGT at admission (1359.98 units), abnormal creatinin and urea and leukocytosis with high neutrophils count. On the next day (25.04) his potassium decreased to 3.2 mmol/L, the patient presenting also low red blood cells count with low hemoglobin. All these parameters normalized close to discharge, all returning to normal on 08.05.2017, the patient being discharged on 19.05.2017.
On 26.04.2017 the patient presents hematuria. Urinary analysis show some abnormal parameters: Urinary glucose 150 mg/dl, urobilinogen 8 mg/dl, red blood cells
50Ery/ul, urinary sediment: frequent red blood cells, ammonia magnesium phosphate crystals abundant. The internal medicine consult recommends glyoxylate hemoglobin, which was normal and repeating of the urinary analysis in two days. On 27.04.2017 the urinary parameters were normal, except for a higher urobilinogen of 8 mg/dl.
Both EKG and chest X-Ray were normal, patient didn’t present any fever. The internal medicine consults recommended iv hydration (2500 ml per day) and hepatic protection and sylimarin in high dose (1000mg/day) in association with the anti-epileptic treatment and benzodiazepines. No neuroleptic treatment was administered. Two neurological exams were performed, with no abnormal modifications except those due to spastic tetraplegia. 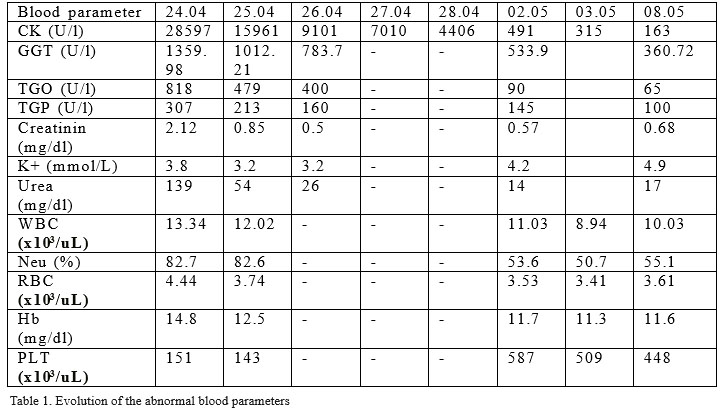 COURSE AND TREATMENT: at admission, on 21.04.2017, the patient was agitated and suffering alcohol withdrawal with diaphoresis, tachycardia and tremor of extremities. He received at 8:30 pm intravenously 500 ml of 5% Glucose with 400 mg of vitamin B1 and 100 mg of vitamin B6 (both in injection form, administered in perfusion), 1 mg of lorazepam, 300 mg of Carbamazepine and 50 mg of Metoprolol. At 2:45 am his blood pressure was still high (150/90mmHg) so he received 5 mg of enalapril and 1 mg of lorazepam.
On 22.04 at 08:30 am his physical state was good, he was cooperating and slept during the night, with normal blood pressure and 94bpm pulse. He received 500 ml of 5% iv glucose and 500 ml Ringer solution with 400 mg of Thiamine and 100 mg of vitamin B6, 3 mg of lorazepam (1-1-1) and 300 mg of Carbamazepine at 8 pm. Metoprolol was not administered.
On 23.04 he became agitated and he was under contention (both arms and legs) for 2 hours (2:30-4:30 pm), with control of the state and vital signs at every 15 minutes. He also received 10 mg diazepam im. At 9:50 pm he became agitated and hetero-aggressive with the medical personnel, so he was administered 50 mg of Metoprolol (pulse 134 bpm), 300 mg of Carbamazepine and 10 mg of Diazepam. His state didn’t show any improvement, he was hetero-aggressive still at 10 pm so contention was started and maintained for 2 hours. At 4 am on 24.04 he became agitated and hetero-aggressive again, needing contention for 2 hours and another im injection of 10 mg of Diazepam. At 8:30 am on 24.04 he tried to tear his iv catheter so he needed contention again for 1 hour in order to administer the iv fluids.
On 24.04.2017 at 9 am the patient arrived on the ward. Blood parameters were tested. The patient was cooperative, partially oriented in time and space, auto and allopsychic oriented. He wasn’t delirious, no signs of alcohol withdrawal. He was requesting beer and a cigarette. He was sent for neurological and internal medicine examination, as the blood parameters were abnormal (very high creatine kinase level). He was physically stable, not presenting any fever, no meningeal signs present. He was administered 2500 ml of iv fluids (500 ml Glucose 5%, 1000 ml Ringer solution and 1000 ml saline), same dose of vitamin B1 and B6 with the iv fluids, 1 mg of lorazepam (adding 1 mg in case of agitation), 300 mg of carbamazepine morning and evening (1-0-1), 1000 mg of silymarin and 250/50 mg levodopa/carbidopa combination, divided in four quarters throughout the day. Contention and intra-muscular injections were forbidden. The next day the patient was cooperating, no agitation nor hetero-aggressive outbursts during the night, but presenting hematuria and glucose in urine. He was aware, afebrile (36.6 degrees temperature), normal blood pressure and no neurological nor alcohol w i t h d r a w a l s y m p t o m s . I n t e r n a l m e d i c i n e a n d neurological consult indicated following the patient state and hydration. He stayed on the same treatment until 06.05.2017, with very good evolution, blood parameters becoming normal as time passed. The combination of levodopa/carbidopa was withdrawn at neurologist’s indication and as the patient started drinking liquids orally, intravenous fluids were also withdrawn. He was discharged with carbamazepin 300 mg (1-0-1), lorazepam 1 mg (1-0-1), silymarin 1000 mg (1-0-0) and vitamin B1+B6 in oral form. Even if the evolution had a favorable course, the patient wasn’t fully compliant to treatment and he continued alcohol consumption. He had 2 more admissions for alcohol withdrawal, the last one being in December 2017. We mention that during the last 2 admissions his physical state was stable and his blood parameters including creatine kinase were normal, with the exception of liver enzymes and GGT.

DISCUSSION: This case was very intriguing because of the elevated creatine kinase in spite of the lack of neuroleptic treatment. We took into consideration all the differential diagnoses that could cause such a high elevation of this enzyme level (myocardial infarction, myocarditis, malignant hyperthermia, neuromuscular diseases, auto-immune myopathies, periodic paralyses, muscular traumas and high physical effort) but the patient didn’t present any signs or symptoms that would suggest any other diagnosis. The abnormal blood parameters suggested liver toxicity due to alcoholism and renal disturbances due to myoglobinuria. His white blood cells were elevated but the patient was afebrile and the internal medicine consult didn’t recommend antibiotic treatment, attributing this abnormality to dehydration. He had mild anemia and his potassium levels were low for a couple of days. All the parameters came back to normal up to the discharge date, except for hemoglobin, which was maintained slightly under the normal limits (11.6 mg/dl). The patient was not receiving neuroleptic treatment prior to admission, and didn’t receive any antipsychotic agent during hospitalization, fact that eliminates the possibility of neuroleptic malignant syndrome. The only possible cause that could explain the extremely high creatine kinase would be the agitation that necessitated repeated contention for a long time, the patient also suffering from spastic tetraplegia with muscle contraction that could lead to rhabdomyolysis.
CONCLUSION: We consider this case very interesting because having such an elevated CK level in the absence of neuroleptic treatment is not very frequent in the psychiatry units. The particularity of the case was the lack of a particular cause that would lead to very high CK and the good evolution, as the patient didn’t progress to renal failure and his CK level returned to normal in 15 days time.