The somatic comorbidities in unipolar depression are a potential risk not only for the unfavorable course, but also increase the social and economic burden of this disorder A study conducted on a group of 5054 patients with depressive disorders that were hospitalized in the Neuropsychiatric Hospital of Craiova over a period of 5 years has shown a relatively high frequency of cardiovascular diseases and hyperglycemia, especially in women. The unfavorable course of the mental disorder was significantly associated with a higher frequency of somatic comorbidities, more hospitalizations and a longer duration of hospitalization. These results demonstrate the importance of the multidisciplinary approach for any comorbid association between mental and somatic disorders to improve the outcome of the medical treatment and to ensure a good recovery of the depressive episode.

Introduction
Epidemiological research has emphasized the fact that, in the case of unipolar depression, there is a high rate of comorbid associations with various medical conditions, which may significantly complicate both the disease prognosis and the psychopharmacological treatment, as well as the quality of the therapeutic response. The presence of somatic comorbidities is a major risk factor for the outcome of psychiatric disorders, with a 1.6-3 times higher mortality rate in this category of patients (1) that require a specific approach regarding the primary care, specialized care and treatment priorities.
The depressive disorder is an important part of the cardiovascular pathology, given the fact that it constitutes a risk factor in the initial stages of the disorder, and it can also lead to an unfavorable prognosis (2). The epidemiological data show a nearly 20% prevalence of depressive disorders in patients also suffering from cardiovascular diseases, with three times more frequent instances of psychiatric disorders in these patients than in general population (3). Depression can be generated by the side effects of cardiology medication (beta-blockers, thiazide diuretics, angiotensin-converting-enzyme inhibitors, antiadrenergic agents, some antiarrhythmic medicines, digital drugs) (4, 5).
Another frequent comorbidity in depression is hyperglycemia, people suffering from diabetes having a three times higher risk of developing depressive disorders, compared to the general population. Almost 20% of the diabetic patients (6), and particularly those with Type 2 diabetes, have severe depressive symptoms (7) that increase with 86% the costs of care in these patients compared to the care of the patients with diabetes only (8). The comorbidity of these two medical conditions may also appear as a side effect of the antidepressant or antipsychotic medication used to treat depression (9). Depressive disorders occur in 10-27% of the people having survived a cerebrovascular accident, with symptoms occurring for approximately one year. Another
15-40% of the patients show signs of depression during the first two months after the stroke (10). The stroke mortality rate was also 50% higher in the case of depressive patients (11). Depression also occurs in over 25% of the patients having been diagnosed with cancer. However, the depressive symptomatology is often mistaken for the side effects of the corticosteroid treatment or chemotherapy, or for the cancer symptoms which cause a loss of appetite and weight, insomnia and fatigue (12). This leads to a high rate of underdiagnoses in 40-90% of the patients (13).
Depression is also associated with hepatitis C. This association is a significant factor for the negative outcome of both conditions, when the effects of the immunosuppressant or antidepressant drugs play an important part in the entire process (14). Also, associated with depressive disorders, obesity is related to the hyperactivity of the hypothalamic–pituitary–adrenal axis, to high cortisol levels and to the side effects of some psychotropic substances (antidepressants, antipsychotics, mood stabilizers). Also, the overweight depressive patients have cognitive dysfunction that is correlated with structural abnormalities of the brain at the level of the white matter, hypothalamus, hippocampus, cingulate gyrus and basal ganglia (15).
The depressive disorder is merely one of the manifestations of the neurodegenerative diseases prodromal and it is also a risk factor for the increase of dysfunctionalities generated by this type of disorders. In Alzheimer’s disease, depression occurs along with the Mild Cognitive Impairment (MCI) syndrome, and it has a significant impact in its development to the stage of a neurodegenerative disease (16). It was revealed in 40% of the patients during the first three years of their disease. In
24% of the cases the cognitive deficit improved after this initial stage (17). Depression also occurs in the prodromal stage of Parkinson’s disease, in 20-40% of the patients (18). It is a risk factor for the cognitive deterioration which is specific to this neurodegenerative disease (19). The prodromal stages of multiple sclerosis are associated with depressive symptoms in up to 40% of cases (20). An important part in this comorbid association is that of the side effects of the immunosuppressants used to treat the disease, leading to a 54% incidence of depression in the patients diagnosed with neurodegenerative disease (21). In Huntington’s disease, depressive symptomatology occurs in 30-60% of cases, along with structural abnormalities of the brain at a mesencephalic level and a relatively high, 3-7% rate of suicidal behavior (22).
Depression is an important comorbid association for the HIV infection, as it amplifies the immune deficit generated by this viral affection and it occurs from the very beginning of the disease, along with the cognitive deficit (23). The depressive disorder also leads to a nearly
20% increase of the suicide risk, up to approximately 70% (24). Within the context of chronic pain and of HIV d i a g n o s i s , d e p r e s s i o n a l s o d i s p l a y s a n x i o u s manifestations, in over 70% of cases (25). The severity of the symptoms can also be aggravated by the side effects of the antiretroviral medication.

Materials and methods
We conducted a retrospective study by reviewing the observation sheets of 5054 patients diagnosed with Unipolar Depression, according to the ICD-10 criteria, and treated in the Neuropsychiatric Hospital of Craiova, between January 1, 2008 and December 31, 2012. The study complied with the ethical norms regarding clinical research and it was approved by the Local Ethics Committee. 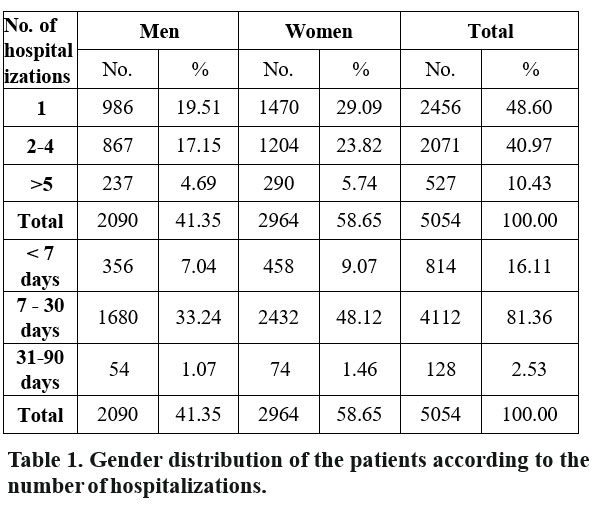 Almost half of the patients included in the study group had at least one associated somatic disease. (2401 patients; 47.50%). Out of the total number of patients diagnosed with multiple disorders (both psychiatric and somatic), the majority had one (935 patients; 18.50%) or two somatic comorbidities (900 patients; 17.80%) (Table2). 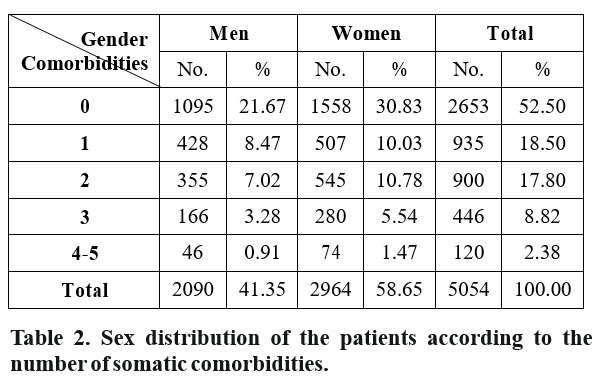 The comparative analysis of the number of comorbidities based on the gender of the patients showed a higher prevalence in women (58.65%, p<0.05). The cardiovascular comorbidities (myocardial infarction, arterial hypertension, coronary diseases, cardiac insufficiency) had the highest frequency (17.22%) with 10.01% women and 7.21% men. Over the 5 years under study, hyperglycemia was mentioned in 1055 instances (9.45%), with twice as many women (6.52%) as men (2.93%) (p<0.001), while other neurological and neurodegenerative disorders were recorded in 895 cases (8.01%), (4.74% women and 3.28% men, respectively). The other somatic disorders (endocrine, metabolic, hepatic, infectious) found in the medical documentation, but not considered as significant were listed in the category of “other comorbidities” accounted for 2345 (21.00%) of the total number of hospitalizations included in the study. We noticed a slight tendency of associating unipolar depressive disorders with other comorbidities in women (p<0.05) (Table 3). 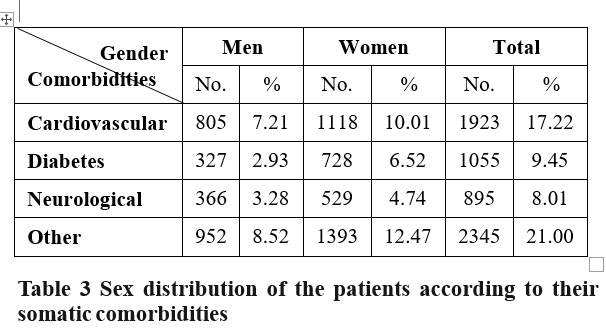 Discussions
The association between somatic comorbidities and major depressive disorder is a risk factor for the negative course of both nosologically entities, leading to higher mortality rates and to the need for complex care (1). Moreover, the comorbid association of two or more somatic disorders leads to an amplified debilitating effect of the psychiatric disease. This is reflected in the lower social and economic standard of the depressive patients, in the higher burden of disease and in the increase of care costs (26, 27).
The prevalence of comorbid cardiovascular diseases (arterial hypertension, myocardial infarction, cardiac insufficiency) found in our study is in accordance with data reported in the literature (3), while the prevalence of type I and type II diabetes (9.45%) and neurological complications (8.01%) are at the lower end of the published reports (6, 7, 10, 28).
The statistical analysis of the results emphasized the connection between the number of the somatic comorbidities associated with depressive disorders and the number of hospitalizations. Data suggest that a higher number of somatic comorbidities may complicate the course of the psychiatric disorder, which in turn increase the number and duration of admissions.
We found a significant correlation (p<0.001) between the number of comorbidities and number of hospitalizations (Figure 1). 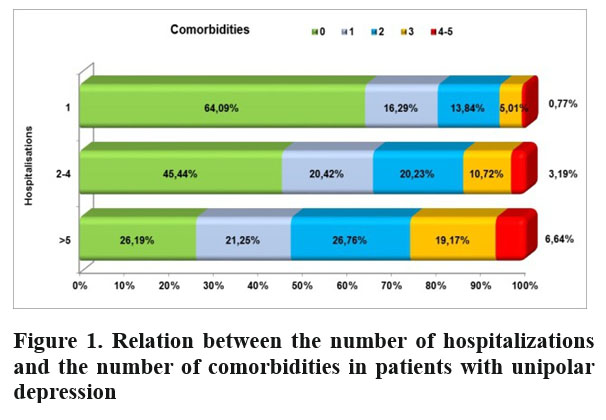 Thus, the proportion of patients requiring more than 5 hospitalizations compared to only one h o s p i t a l i z a t i o n i n c r e a s e s w i t h t h e n u m b e r o f comorbidities (26.76% vs. 13.84% for 2 comorbidities;
19.17% vs. 5.01% for 3 comorbidities; 6.64% vs. 0.77% for more than 3 comorbidities). The large number of admissions may also be related to the debilitating potential of depression (29), to higher care costs (27), as well as to a lower quality of life and to the perception of the disease as a burden (1, 30). The data suggest that the association of somatic comorbidities may aggravate the psychiatric condition, leading to more hospitalizations and to negative clinical, social and economic effects (31, 32).
The number of comorbidities associated with psychiatric disorders has also constituted one of the variables used to identify potentially significant d i ff e r e n c e s b e t w e e n t h e a v e r a g e d u r a t i o n o f hospitalization and the number of related somatic diseases. We searched for a set of statistically valid indicators for the influence of comorbidities on the course of the psychiatric disorder, which could predict an unfavorable outcome of the mental illness and a significant increase of the mortality rate (1).
We found a longer average duration of admissions in patients with no somatic comorbidities (13.38+7.78 days), as compared to those with simultaneous manifestations of both the depressive and the somatic symptomatology (12.34+5.90 days for one somatic comorbidity, 12.05+5.35 days for two somatic comorbidities and 12.64+6.31 days in patients with three or more somatic comorbidities associated with the primary diagnosis of unipolar depression (p<0.001) (Figure 2). 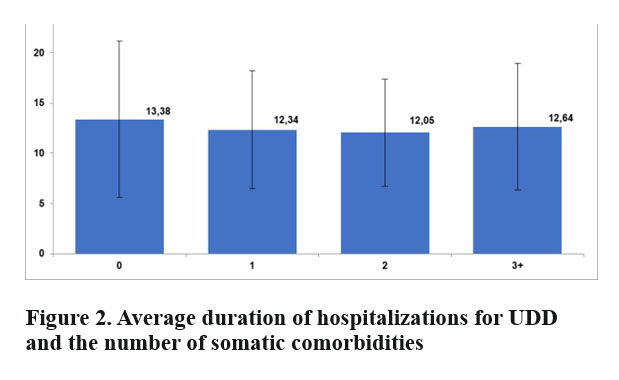