E a r l y   o n s e t   s c h i z o p h r e n i a   i s   a neurodevelopmental disorder, being characterized by degeneration of thinking, affectivity and social relations, starting in the child between 13 and 18 years old, the diagnosis having basically the same criteria as in adult (1, 3). The disease prevalence is between 3.5-4/10000 at the age of 13-15 years old, more frequent in the female gender. The etiology of the disease is complex being involved genetic, biologic and psycho-social factors (2, 4). The disease onset may be acutely characterized by obsessions, phobias, unjustified fears, psychomotor agitation. The insidious onset is characterized by depersonalization, derealization, irritability, impulsivity, aggressiveness, social withdrawal, refuse to go to school, disinterest in personal hygiene (3, 5).The clinical picture of the Early-onset schizophrenia consists in behavioral disorders, social withdrawal, decreased school results, interpersonal relationships, losing sense of reality (2, 8).The evolution of the disease is severe, as risk factors being mentioned the poor premorbid functioning and cognitive impairment. The onset is marked by genetic susceptibility, clinical severeness and reserved prognostic (6).The introduction in the treatment of new antipsychotics (atypical neuroleptics) has changed the evolution and prognostic of the disease (7). The elements of favourable prognostic are: late and acute onset, absence of psychiatric antecedents, of disposition disorders, of social, sexual and occupational favoring premorbidity, good family support, presence of only positive symptomatology. The unfavourable prognostic represents the early insidious onset, the presence of psychiatric antecedents, social and school withdrawal, social, sexual and occupational unfavoring premorbidity, poor family support, presence of positive and negative symptoms, associated neurological symptomatology, impairment in neuropsychomotor development, multiple relapses (3, 4).

A study has been performed on 26 patients with Early-onset schizophrenia admitted at the Clinic of Pediatric Neurology and Psychiatry from Tg-Mures, in
2014, aged between 13.4 and 17 years old. The clinical diagnosis has been determined based on the criteria of DSM IV and V and ICD 10. We monitored the epidemiological data, heredo-collateral and personal antecedents, physiological and pathological data, the onset, the evolution under treatment and the prognostic. T h e   p a t i e n t s   h a v e   b e e n   e x a m i n e d   c l i n i c a l l y, neurologically, psychiatrically and psychologically. There have been performed different paraclinical examinations : EEG, brain imaging, PANSS test.

Among the etiologic factors involved in the Early onset schizophrenia, in our study there were emphasized the genetic predisposition and heredo-collateral factors on the psychiatric side, in 10 children under the form of schizophrenia at mothers (5 cases), grandmothers (3 cases) and aunts (2 cases) (Figure 4). 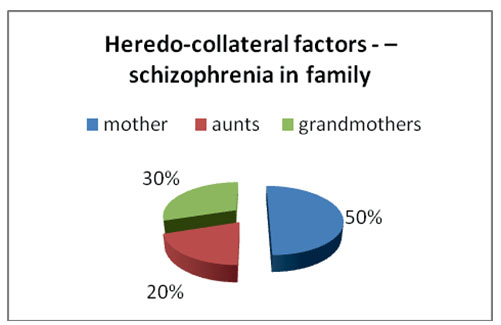 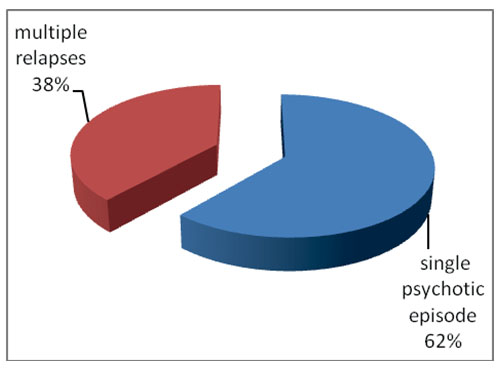 Figure 5. Distribution of cases according to the psychotic picture

Positive symptomatology has been present in 13 patients consisting in: visual hallucinations (5 cases), auditory ones (6 cases) and delirious ideas (2 cases). These were persecution ideas (they are followed by the police, by neighbours, their phoned are tapped, parents hired detectives etc.) or megalomaniacal ideas (Figure 6). 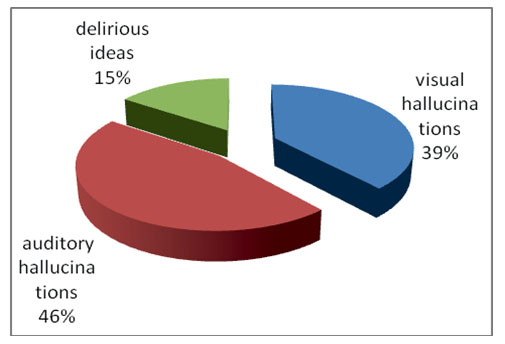 Negative symptoms consisting in apathy, abulia, poverty of speech and affection, withdrawal, decrease of school results noticed at least 6 months before hospitalization, have been emphasized in 10 patients (38%). Only 3 patients had both positive and negative symptoms. The PANSS test has been applied to 14 patients (54%), having values over 90 (the lowest value 91, the highest 117). In the case of the other 12 patients, it was not possible the application of the test due to their clinical condition and precarious level of education. The evolution and prognostic have been favourable in 62% of the patients (16 cases) with a single psychotic episode and unfavourable in 38% (10 cases) with frequent relapses and repeated and extended hospitalizations (Figure 7). 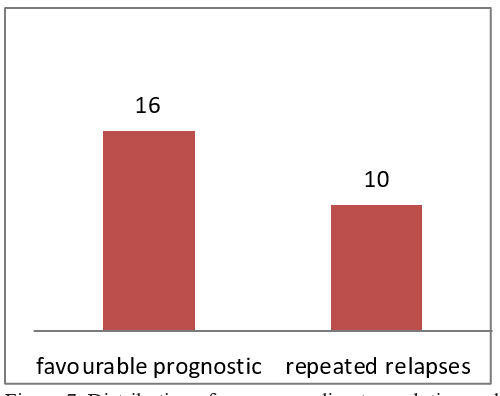 Figure 7. Distribution of cases according to evolution and prognostic

DISCUSSIONS
According to the specialized literature data, the single psychotic episode represents a factor of favourable prognostic, while the multiple relapses a reserved one (1, 4). Within the study performed, 16 patients (62%) had a single psychotic episode, so a favourable prognostic. Additionally, it is important only the presence of the positive symptoms, acute and late onset, family support, absence of heredo-collateral psychiatric, fact ascertained in most patients.
The unfavourable prognostic is determined by the early, insidious onset, the presence of positive and negative symptoms, social and school withdrawal, association of neurological symptomatology, multiple relapses, poor family support (2, 3), fact ascertained in 10 patients (38%). The specialized literature (3, 4) specifies that the occurrence of the disease is correlated with the psychiatric antecedents within the patients family, of the parents or first degree relatives. Within the study performed, in 10 cases (38%), schizophrenia has been present in mothers, grandmothers and aunts. There are mentioned studies that talk about the existence of neurological lesions or delay in neuropsychomotor development in patients with Early onset schizophrenia (3, 5), fact emphasized in the study performed in 4 cases (15%).

CONCLUSIONS
Early onset schizophrenia has been more frequent in the female gender (65%). The single psychotic episode has been present in 62% from the patients, positive symptoms being outlined in 73% of them. So the evolution and prognostic have been favourable in most of the patients due to the single psychotic episode, good compliance to the treatment, family support, acute and late onset, the presence of only positive symptoms.