ASSESSING THE VIOLENCE RISK IN SUBJECTS WITH FORENSIC PSYCHIATRIC EXAMINATION

Objectives: Assessing the violence risk in the population with forensic psychiatric examination is carried out subsequent to assigning the diagnostic, the discernment. Measuring the violence risk is concluded in the proposals of the board of forensic psychiatric expertise for actions of medical safety. The use of modern, contemporary tools to evaluate the violence risk (Guide for Assessing Violence, HCR-20) provides documentation on the factors which led to the conclusion of forensic psychiatric examination. Method: The purpose of the research is represented by the assessment of the violence risk in subjects examined within the Laboratory of Forensic Medicine from Bihor County between 2010 and 2011. In this respect, the following tools were employed: Mini International Neuropsychiatric Interview (MINI), the Guide of Assessing the Violence Risk (HCR-20), Psychopathy Checklist Revised (PCL-R), Clinical Global Impresion Severity (CGI-S). Results: The violence risk and relapse in the delinquent population diagnosed with personality disorder correlates with the stable demographic and historical factors (HCR- 20 subscale H). The clinical, dynamic factors (HCR-20 subscale C) involved in violence are predominantly associated with psychotic disorders and schizophrenia. The severity of the psychosis, the severity of violence, the adherence to treatment implies the recommendation for measures of medical safety. Conclusions: HCR-20 has inter-rater validity within the population studied. HCR-20 items don't have the same importance and the same predictive power for violence or relapse. HCR-20 doesn't offer cut-off scores to indicate the degrees of the violence risk, but founds and increases the transparency of the recommendation made by the board of forensic psychiatric expertise.

At the level of the European Union, the forensic psychiatric examination in subjects with delinquent behavior uses tools of assessing the violence risk and the risk for relapse. EMLP differs from a country to another according to legislation, medical organization and judicial framework. Analyzing the legislation of the member states of the European Union, Salize and Dreβing state that in
2005 “a reconcilability of the legislative concepts along the European borders seems to be presently difficult to obtain. At least the elaboration and implementation of training standards for specialists in forensic psychiatry are desirable”(1).
The established tools (HCR-20, PCL-R) in the forensic practice had been adapted on various samples (delinquents, penal convicts, patients with mental disorder from the community and the forensic psychiatric structures). The use of these tools on the Romanian population needs validation, evaluators’ training, and establishment of some national norms for the employment in forensic assessments. The capacity of the tools to differentiate various degrees of violence risk (mild, medium, high), to frame categories is indicated to be correlated in the case of individuals with forensic psychiatric evaluation with the recommendations for measures of medical safety.
The notion of assessing the violence risk (Mills et alii, 2011) includes: a) determining the level of risk; b) identifying the significant factors which contribute to the risk; c) identifying some management strategies for reducing the risk; d) communicating the information about the risk within justice (2). 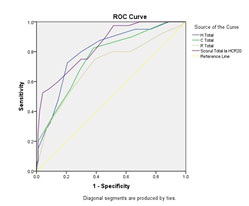 Chart 1. The HCR-20 subscales were analyzed in relation to the prediction of the high violence

Results regarding the Analyzed Population
The severity of the violence act and the prediction for violence were analyzed and correlated in terms of HCR-20 subscales. The results obtained were statistically elaborated by Spearman bivariate correlations. (Table 4)
H, C and R subscales and the HCR-20 total score significantly correlate with each other with the prediction of violence risk, namely with the final judgment of the risk (low, medium, high) assisted by HCR-20.
The H subscale and the HCR-20 total score negatively correlate with the severity of the act for which the expertise is carried out.
Previous violence (HCR-20, H1) was identified as follows: absent with 25 subjects (18.2%), possible with 49 (35.8%) and present with 63 (46.0%); mean = 1,28; standard deviation = 0.755. The possibility to rate with 1 the items of HCR-20 scale for the possible or partially present factors can be noticed. We underline the context of a single evaluation of the examined subjects and the limited time as causes which hindered the rating of absent or present. H1 correlates with the prediction of the violence risk but not with the severity of the act for which the expertise is carried out. The explanation is the manner of defining the act, serious dissocial actions without violence being considered the following: destruction of goods, theft and home infringement. Verbal, physical violence and threat are frequently associated with this behavior, but, as a rule, they are not registered in the medical documents of justice.
The H5 item refers to disorders connected with the use of psychoactive substances. We underline that disorders related to the use of psychoactive substances i n c l u d e a l s o d i s o r d e r s p r o d u c e d b y a l c o h o l , ethnobotanicals, and association of substances which include alcohol, ethnobotanicals and psychodysleptics. The consumption of ethnobotanicals was revealed in 5 subjects (3.6%) and of alcohol in 64 (46.7%). The alcohol use is correlated with the prediction of violence risk and the severity of the violent act. Table 5 illustrates the relationship between the use of psychoactive substances and the severity of the penal act.
The clinical diagnostic of psychopathy established by PCL-R is supported by the H7 item; for rating, a threshold rate of 25 points was employed, accepted in the literature for the European population (Hare, 2001). In the group studied, psychopathy (Hare) is present in 8% of the examined subjects (11 subjects), average = .48, standard deviation = .643. 32,1% of the subjects have traits of Hare psychopathy and personality disorder (rated by H9 item). Partial rates for the H7 item for psychopathy (32.1% – 44 subjects) and H9 for personality disorder (47.4% – 65 subjects) were obtained also due to the inclusion of the minor subjects examined in a number of 36 (26.27%). The diagnostic of Hare psychopathy and personality disorder were defined only after the age of 18.
The H9 item supports the diagnostic of personality disorder according to ICD-10 and DSM-IV. The diagnostic of certainty is established at a rate of 2 of the HCR-20, a rate of 1 indicated a possible personality disorder or traits of personality disorder and a score of 0, the absence of personality disorder. The HCR-20 rating establishes a dimensional diagnostic of personality disorder, the diagnostic of certainty being later determined either previously, diagnostic taken from the medical records, either by the evaluation of the forensic examination board or by personal evaluation.
CGIS measured the severity of psychotic disorders from the schizophrenia spectrum disorder and mood disorders at the moment of the expertise, but not at the moment of the action, the severity being often the same. The hypothesis that CGIS is a global indicator correlated with violence, the prediction, the safety measures recommended by forensic psychiatric examination board are verified, the rate of chi square being significant (87.967 Pearson Chi-Square 0.000). Table 6 shows significant correlations between CGIS and the recommendation of board. A CGIS scored with 4 (obvious symptomatology but with modest functional effects or distress) or 5 (the symptoms significantly modify the occupational or social activity or causes a severe level of stress) defined the threshold of decompensating psychoses.
At the studied sample, the base rate is reduced for severe violence in schizophrenia (n=2; 10%) compared with severe violence in other mental disorders, in organic mental disorders (n=3; 15%), in dissocial personality disorder (n=8; 4%), alcoholic dependence sindrom or co- morbidity (n=15; 75% ), with no psychiatric diagnostic of major mental disorder (n=15; 75%), subjects with disorders in which they have discernment and responsibility and were included in reformatory structures.

DISCUSSIONS
The use of modern, contemporary tools (HCR- 20, PCL-R) provides information about the risk factor for violence and relapse in the population with forensic psychiatric expertise.
Assessment the violence risk is concluded within the recommendation of the forensic experts for measures of medical safety. Although the use of these tools on the Romanian population needs validation, their ability allowed the identification of factors involved in violence in relation to its severity. The age of the first violent incident is under 30 with most subjects. (10)
The repartition of the severity of the act done by the subjects examined within the Laboratory of Forensic Medicine from Bihor County (2010–2011) is similar to that encountered in other national forensic populations, the expertises carried out at the Psychiatry Hospital and for Safety Measures Sapoca (9) both for non-violent acts 55.5% versus 44.3% and for acts with severe violence 14.6% versus 13.1%, which include especially the homicide and sexual violence, the results being explained by the use of HCR-20 and its definitions for violence.
The HCR-20 predictability in our study doesn’t represent the same sensibility for the prediction of mild, medium and severe violence. The differences can occur due to the heterogeneous sample studied, the limited period of time and a single evaluation. The H subscale and the HCR-20 total score negatively correlate with the severity of the violence act examined.
The H1 item, considered to be the most important predictor of violence with delinquents, doesn’t correlate with the severity of the act for which the expertise is done, probably due to the manner of defining the act; highly dissocial acts which, as a rule, are not registered in the medical files and in those pertaining to justice (destruction of goods, theft, trespassing) are taken as non-violent. The HCR-20 rating (H7 and H9 items) establishes a dimensional diagnostic of the personality disorder, the clinical diagnostic being determined by PCL-R (the threshold score = 25).
CGIS measures the severity of psychotic disorders (from the schizophrenia spectrum and mood disorders), being a global indicator correlated with violence, the prediction and the safety measures suggested.
For the use of HCR-20 or other tools, studies on Romanian population, uniform training for all specialists in mental health, norms elaborated by the Ministry of Health are necessary. The inter-rater validity diminishes if there are inequalities in training or a different clinical background (social worker, psychologist, psychiatrist, psychology or psychiatry expert in forensic evaluation or in that of populations from correctional settings).

CONCLUSIONS
HCR-20 has an inter-rater validity on the population examined, reflected by the Crombach alpha index.The most important risk factors for violence are: previous violence (H1 item), abuse of psychoactive substances (H5 item), psychotic decompensation (CGIS greater or equal to 4 registers the affectation of social functionality).
PCL-R identifies variants of the dissocial personality disorder (psychopathy according to Hare, 8%), and MINI the disoccial personality disorders (16.1%), with a history of conduct disorders.
CGI-S correlates with the recommendation of the expertise medicolegal psychiatric board as important factor in the severity and evolution of schizophrenia.
Severe violence in schizophrenia has a low base rate compared with the population examined for penal acts in forensic psychiatric assessment.
The use of certain clinical tools for evaluating the violence risk in the psychiatric forensic population increases the transparency of the assessment, detailing historical and clinical factors, and the elaboration of the assessment in a descriptive manner of the risk and protective factors, the analysis of the contextual factors clarify the recommendation of the board. 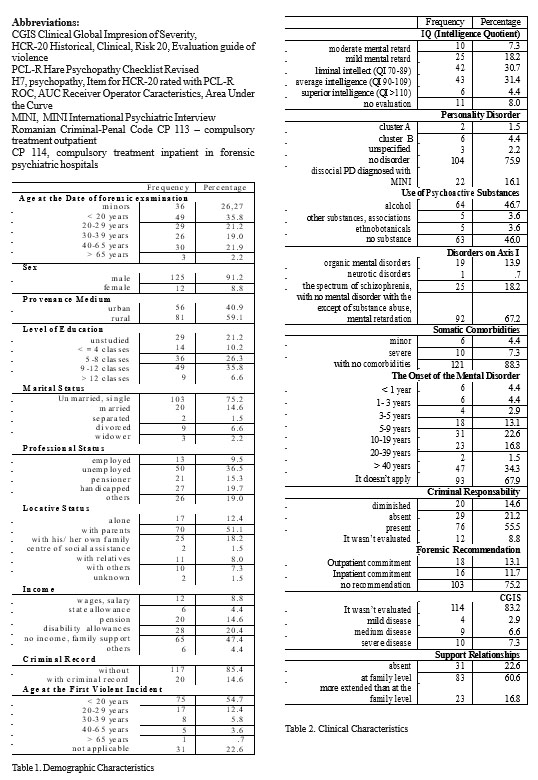 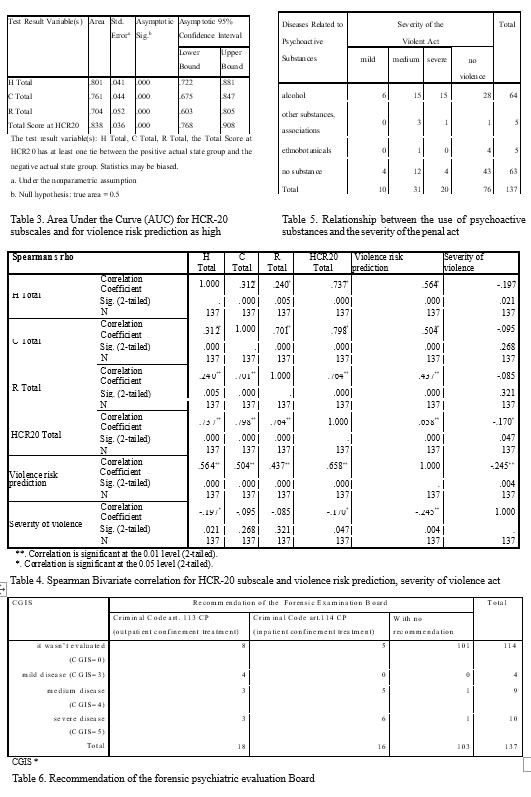