INTRODUCTION
Psychotic disorders with an acute onset, dramatic and polymorphic symptoms and rapid resolution have been described in different countries and in different psychiatric schools. They have been called cycloid psychosis, “bouffées delirantes”, psychogenic psychoses or good outcome schizophrenia, depending on the geographic area where they were described. Currently we find them in the ICD 10 WHO in the category Acute and transient psychotic disorders and in the DSM IV classified as acute psychotic disorder (1.2). Through the emergence of this new diagnosis category the specialists have tried to integrate the diverse national concepts that have been defining so far this nosological entity. This way, the previous studies on these nosological entities have been based on regional concepts of definition and of denomination. Currently there is a limited amount of studies that explore the new diagnostic and denomination classification of this psychopathological area. So far, little is known on the clinical aspects, the precipitating factors, the longitudinal prognosis, the etiology, the biology and the genetics of acute and transient psychotic disorders.
Ever since their definition under different names,
they have been considered nosological entities different from schizophrenia and affective disorders (the typical psychoses). When reported to schizophrenia, they have been considered to have a better course in terms of the clinical and social functioning. (3) Social functioning is an important feature of the longitudinal assessment of psychoses. There have been several attempts to define social functioning and to establish the aspects that best define it. Overall, social functioning represents the way a person carries out its social roles, meaning an individual succeeds to go to work, has a family and a group of friends he can relate to.
In this study we analyze socio-biographic aspects (age at onset and educational level) and social functioning aspects (professional and marital status) in sample of subjects with ATPD compared to a sample of paranoid schizophrenia. Subjects have also been assessed using the GAF Scale. All subjects have had an average of 5 years of catamnesis.

MATERIALAND METHODS
We have selected subjects that were admitted for the first time in Timisoara Psychiatric Clinic between
2005 and 2008 with ATPD – first sample and paranoid schizophrenia – second sample. We have established the size of the samples starting and according to the evaluation of the number of subjects with ATPD diagnosis who had their first admission during the mentioned period and who retained this diagnosis during 5 years of evolution.
The other inclusion criteria were:
-First admission in a psychiatric facility between 2005 and
2008 in Timisoara Psychiatric Clinic, for both samples subjects
-Age by the time of the first admission ranged between 18 and 65 years
-Clinical diagnosis according to ICD 10 WHO: for the first
sample – Acute and transient psychotic disorder and for the second sample – Paranoid schizophrenia. These diagnoses had to be stable for the 5 years follow-up period
-Active outpatients of the Mental Health Centre Timisoara and of the psychiatric surgeries in Timisoara
-Subjects participate voluntarily in the study, without any kind of motivation from the researchers
We have excluded subjects with a history of substance abuse or dependence.
Within the two samples we have assessed the following parameters: age at the time of the admission, educational level, professional and marital status at onset and after five years of follow-up, GAF Score (Global Assessment of Functioning) at the end of the study period.
We have applied the GAF Scale in order to assess the social functioning of the subjects in both samples. This is a widely used scale that helps psychiatrists to appreciate the global functioning of a subject. GAF is a numerical scale (0-100) that correlates the functioning level of the subject with the severity of his clinical symptoms (DSM- IV-TR, 2000).
Data has been obtained from the analysis of the subject’s medical records and from the discussions with the patients and their doctors. We have acquired both quantitative and qualitative data.
We have used the Mann Whitney non-parametric comparison test and the χ2 test for comparing the frequencies. We have also calculated the descriptive statistic (means, frequencies, percentage). 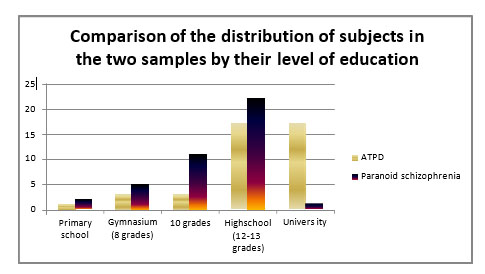 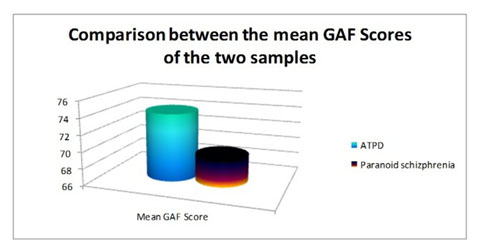 Figure 2. Comparison between average GAF scores in the two samples 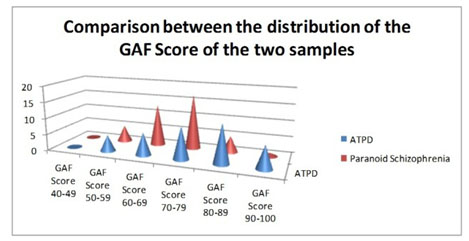 Figure 3. Comparison between the distribution of the
GAF scores of the analyzed samples

A similar distribution of the samples based on the GAF scores can be observed. The Mann-Whitney test does not indicate any significant differences between the two samples regarding the average of the GAF scores (U =
633.5, Z = -1.92, p = 0.055>0.05), although it should be noted that the value of p is close to the statistically significant threshold (p <= 0.05). It is possible that the lack of statistical significance is due to the small number of subjects. It can be observed that most subjects with ATPD have remained married since the onset; only a small proportion of the unmarried were able to marry after the onset of the disease, and two subjects who were unmarried at the onset got married and also divorced during the period between the onset and the assessment. Most subjects with paranoid schizophrenia were not married at the onset of the disease and retained their marital status at the assessment time. Only one subject who was widowed at the onset managed to marry during the course of the illness. Three subjects with schizophrenia were divorced at the time of the assessment: one had been divorced since the onset of the illness, another got married and divorced also after the onset and the third got married before the onset and got divorced before the assessment. Overall, we observed a similar trend of the evolution of the two samples in terms of their marital status: unmarried patients rarely manage to get married after the onset of the disease, but most of the patients that got married before the onset did not change their marital status afterwards. A small amount of the patients with acute and transient psychotic disorder who were unemployed before illness onset were able to work afterwards. The majority of those who were unemployed at onset retained their professional status during the course of the illness and got retired. It can be observed that a large part (80%) of the subjects who were working before the onset also continued to work afterwards. Out of the 26 subjects with schizophrenia who were working before the onset of disease, only 2 (7.7%) have continued to work afterwards. Also, subjects with schizophrenia who were unemployed at onset remained unemployed or retired. By comparing the situation we can remark that schizophrenia has a much more strong influence on the work capacity of the subjects than acute and transient psychotic disorder. Thus, schizophrenia is a powerfully disabling disease.

able 1. Marital status at onset and at the end of follow-up of the two samples

Table 2. Professional status at the onset and at the end of follow-up of the two samples

CONCLUSIONS
Considering the small number of subjects in the two samples, we have only found statistically significant differences regarding educational and professional status both in favor of the acute and transient psychotic disorders sample. The stigma of being a psychiatric patient seems to be equally affecting both types of pathology in the achievement of a legal marriage in our society. This equality is not to be found in the other studies of this kind.
However, this study has not found any statistically significant differences regarding the age of onset and the GAF Score. We believe that this is because we have only included in the schizophrenia sample only patients with the paranoid form and with only five years of evolution.
We may conclude that, within our study, the differences between the subjects with paranoid schizophrenia and acute and transient psychotic disorder regarding socio-biographic aspects and social functioning are not as obvious as the ones mentioned in the other studies on this topic.
New prospective studies, that include a larger number of subjects, will be needed in order to better characterize and define the acute and transient psychotic disorders.

CONFLICTS OF INTERESTS
The authors do not have any conflicts of interests to report.