Around 25% of adults experience a mental illness in each year and approximately 60% received no mental health care. There are still long delays between the onset of symptoms and the first psychiatric consult and treatment. Objective: To understand the pathway to care and to determine the delay in seeking help for mental health problems, considering sociodemographic variables in patients admitted in two Romanian acute psychiatric inpatients settings. Methods: Between May-August 2015, WHO's Pathway Encounter Form was applied to 200 individuals, at their first admission, consecutively hospitalized in acute psychiatry clinics from Targu Mures and Craiova, Romania. Results: The profile of the participants in this study was: woman in the sixth decade of life, having an average economic status and without psychiatric history, searching help for depressive symptoms (by themselves or at the advice of the family), mainly to a psychiatrist or a General Practitioner. The average delay from the onset of symptoms to the first psychiatry consult was 16 weeks. Only previous positive personal history for MH problems and current diagnosis had a high statistically significant influence on the moment when subjects of our study decided to access the MH services. Conclusions: A better knowledge and understanding on the factors that influence people to seek help in mental health problems would be useful for improving the future organization of healthcare services and programs.

INTRODUCTION
The latest data shows that 1 in 4 adults (approximately 450 million people worldwide) experiences a mental illness each year (1, 2) and approximately 60% of them do not received mental health care (MH) (3). Despite effective treatments and universal health coverages in most of countries, there are still long delays (sometimes even decades) between the first appearance of symptoms and the moment when people get help (4, 5). Different studies tried to determine the duration of this delay, as the delay in initial treatment has been recognized as an important public health problem. (6) It seems that this delay varies greatly, being determined by the patient’s characteristics, diagnosis, and healthcare system, the results of studies realized in countries with a low and mid income, and where health care system is under average, showed a median delay of 10.5 weeks in Bangladesh (7), more than 2-5 years in South India (including in patient with for schizophrenia) (8), more than 2 weeks in almost a third of the cases in Malawi (9), 38 weeks in Ethiopia (10). the duration of untreated psychosis (DUP) – an item studied in various study around the world, because of the importance of an early treatment – has also a median of 30.5 weeks. (11)
Previous studies showed that one of the most important factors influencing the delay in seeking help for mental health problems is represented by the family (6, 12, 13), and it is important to underline that most people, especially older and less educated persons tend to be reluctant to take psychotropic drugs (5). Other incriminated factors are lack of knowledge and stigma (16, 18, 20, 22), no formal education, joblessness and other medical conditions (6, 10, 15), younger age of onset, poor engagement with mental health programs and severe symptoms (11), increasing illness severity or level of disability (16), different labels such as “stress”, “paranoid” and “shy” (23). According to an Australian survey, media (internet, TV, newspapers etc.) represents a common source of information about mental health and links to help seeking (23).
There are some frequent pathways to mental health care, worldwide: direct access (12) and indirect access (in a third to three-quarters of cases) (21, 11), realized by GPs (5, 7, 12, 14, 15, 16), general hospitals (20) and private practitioners (12, 24), traditional and religious healers (7, 9, 10, 12, 17, 18, 19) – consulted even by patients with a diagnosis of schizophrenia. Those indirect pathways increase the delay to care (19), the frequency of accessing emergency departments and, consequently, an increased number of involuntary admissions. (13)
OBJECTIVES
Our aims were to identify the delay in accessing MH services for the first time, to understand the pathway to care and to describe the sociodemographic variables in patients who seek help for MH problems, in two clinics for acute psychiatric inpatients in our country. MATERIALAND METHODS
Our study included 200 adult patients at their first psychiatry consult, consecutively admitted in two acute psychiatry university clinics in Romania (100 patients in Targu Mures and respectively 100 in Craiova), during a period of approximately 3 months (May-August 2015), until the targeted number of 100 patients for each setting was achieved.
In the study sample were included all patients who met the following criteria:
·Adults, age over 18 years;
·New cases, who have never been admitted in a psychiatry clinic before;
·Able to understand the purpose and design of the study (were excluded the patients with delirium and severe cognitive impairment, according to a previous clinical evaluation made by a psychiatrist and the results of Mini Mental State Examination – MMSE);
·Voluntary accept to participate in the study, by giving a verbal accept and signing a written informed consent.
The procedure was explained to the patients and the volunteers were enrolled in the study. After the verbal approval to participate, each patient signed a written informed consent, where it was clearly stated that the participation in this study has no influence on the access to care (or on the treatment received), the questionnaires respect the confidentiality of the participants, and no payment will be offered to the participants. We didn’t used any recruitment material and the participants were free to refuse the study at any moment.
After signing the informed consent, each participant was asked about the delay to the first psychiatry consult, in an interview following a translated version of the WHO Pathway Encounter Form, which collects data about:
·Characteristics of the patient: age, gender, marital and economic status, history of psychiatric diagnosis;
·The first decision to seek help for his/her MH problem: with who?, how long ago?, who suggested the first consult and why?, when the first symptoms occurred?, treatment received, the duration of the delay;
·The main category of diagnosis of the patient and associated health problems.
The average duration for the interview was 10 minutes for each participant. Data was filled in by the authors for each patient, who received a number from 1 to 100, in order to respect the confidentiality of the participants.
The approval to use the WHO Pathway Encounter Form questionnaire was obtained, and the study was approved by the local ethical committees.
RESULTS
The sample of 200 patients was unequal regarding the characteristics of participants. The majority of patients were women (77.5%, comparing with only 22.5% men) in the sixth decade of life (50 – 59 years), 75.5% were married, 9% single and 9% widows, and the rest were divorced (6.5%).
According to their age, 6.5% of the participants were 18-
29 years old, 7% were 30-39 years, 7% 40 to 49 years, and the majority (54%) were in the sixth decade, while 15.5% were older than 60 years. An important difference between the two sites was noticed: in Craiova, 90% of the participants were women, out of which 83% in the sixth decade of life. Most of the participants declared themselves having an average economic status (83% of cases), with only 9.5% and 7.5% declaring themselves poor and respectively, having a high economic status. Also, 63% of the patients had no history of MH problems. The first decision to seek help for the MH problem was suggested in half of the cases by the patients themselves, closely followed by the family (40.5% of the cases). Only 8.5% of the consultations were suggested by a specialist doctors and 1% by the patient’s GPs. The first consult was done, in the majority of cases, by a psychiatrist, followed by a GP, respectively Emergency Department’s specialists. (Figure 1) 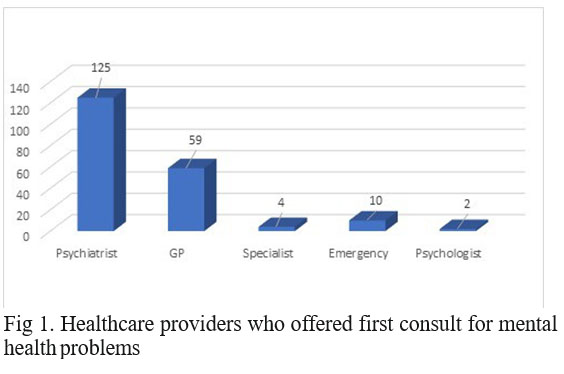 The reasons for the first consult were mostly depressive symptoms (64.5%), followed by sleep disorders (19.5%), anxiety and panic attacks (16.5%), psychotic symptoms (15.0%, out of which 3.5% had suicidal thoughts!), and somatic complaints (11.5%). Most of the patients seek help for two or more symptoms.
The treatment received in the majority of cases was antidepressant drugs (66.0%), benzodiazepines (36.0%), antipsychotics (18.5%) and vitamins (18%). Our study revealed that benzodiazepines are very often prescribed as the first intention in MH problems. For some patients were prescribed associations of psychotropic drugs.
The categories of diagnosis were the following: 66.5% affective disorders, 10% psychotic disorders, 10% drug related disorders (mostly alcohol dependencies), 6.5% somatic disorders, 5.5% diagnosis of anxiety, 1% personality disorders and 0.5% cognitive disorders. Few patients had more than one diagnosis. 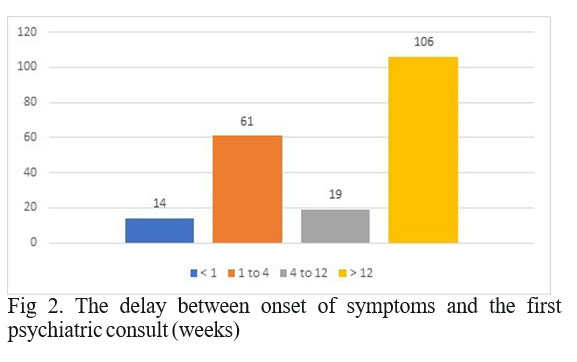 The delay from the onset of the symptoms to the first psychiatric consult varies greatly from one patient to another, with a median delay of 16 weeks (Figure 2). 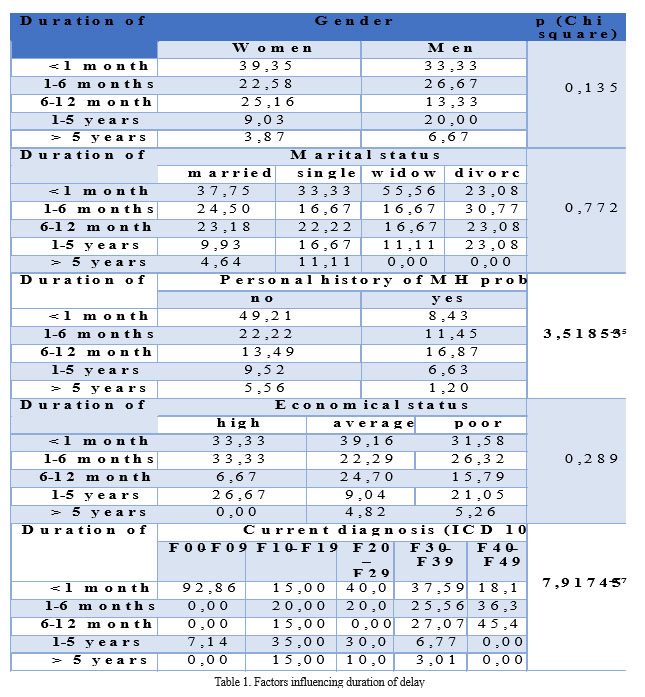 The longest delay recorded was approximately 20 years and the symptoms described by the subjects were mostly somatic. As it could be observed in the Table I, statistical analysis (Chi square test) showed that out of all factors considered to have an influence on the delay to search for professional mental health care, only previous positive personal history for the MH problems (p<0.001), respectively current diagnosis (p<0.001) had a high statistically significant influence to the moment when subjects of our study decided to access the MH services.
DISCUSSIONS
The high prevalence of women aged between 50-59 years had no evident explanations. All patients live in the defined area, which could suggest that distance to MH services is important in accessing health care.
The average economic status is common for a South- eastern European country and the absence of relevant MH history was expected in the majority of cases, because patients with psychiatric diagnosis usually have at least one psychiatry admission in a certain moment in their life. An important result for understanding the pathway to care is the importance of family in seeking help for MH problems. Also, patients asking help for themselves suggest either a good awareness about MH diagnosis and available treatments, based on previous experience, or it could be biased by the high prevalence of histrionic traits in women, who are majority in our study. Further investigations would be necessary, in order to elucidate the small numbers of referrals suggested by GPs and specialist doctors. The importance of the GPs in the pathway to MH care is confirmed in our study, as we expected after the previous experiences described in the literature.
Results’ repartition regarding the psychiatric symptoms which determined the participants in the study to seek help, seem to follow the epidemiological evidence, with a greater prevalence of depressive symptoms and consequently, of affective disorders diagnosis, this group of symptoms having a significant influence on our study sample.
An alarming result is the frequent prescription of benzodiazepines in the first psychiatric consult, but this result could be obtained due to the specific (egg. more severe) psychopathology referred in psychiatric acute hospitals.
The median delay of 16 weeks seems to be aligned to other international studies’ results. However, there are important differences in the delay (sometimes decades) from patient to patient.
There is no clear evidence regarding the factors that could influence the delay and the pathway to MH care, but few suppositions were already made. Further investigations are still needed, in order to find adequate modalities for improving the access to care for people facing MH problems.
CONCLUSIONS
Knowing the delay from the onset of the symptoms to the first psychiatry consult, as well as understanding the factors influencing people to seek help in MH problems would be useful for improving the future organization of MH services and for the development of different MH programs.