Introduction: Cognitive assessments could represent the basis for the development of better suicide risk assessment tools. However, neuropsychological functioning studies conducted so far in this field used different paradigms and a clear conclusion regarding the utility of working memory and executive functions modifications as markers of suicide risk has not been reached yet. Therefore, the aim of our study was evaluate whether suicidal major depressive disorder patients show a specific pattern of cognitive dysfunction as compared to non-suicidal major depressive disorder patients, using a well-standardized computer-assisted assessments. Material and Methods: Forty adult major depressive disorder patients were included. The mean age of the participants was 49,8 ± 11,6 years and 67,5% of them were females. The Romanian version of the Structured Clinical Interview for the Montgomery-Asberg Depression Rating Scale(MADRS) was used to quantify the clinical severity of the current depressive episode and suicidal risk. Cognitive testing was performed using the state-of-the-art computerized CogTest battery. Working memory was assessed through the Word List Memory Test and executive functions were assessed using the Strategic Target Detection Test and the AX version of the Continuous Performance Test. Results: Our results show that among major depressive disorder patients, 20% are at significant risk of suicide and that neither the working memory test nor the two executive functions tests we used were able to discriminate this subgroup from non-suicidal patients. However, reaction times recorded in our executive functions tests were shorter for suicidal patients in the case of the Continuous Performance Test, but not in the case of the Strategic Target Detection Test. Discussion: The results we obtained regarding working memory and the number of errors in executive functions tests was in line with previous research. The shorter reaction times registered in sustained attention tests could be explained by higher impulsivity levels in suicidal patients or by the more complex association between executive dysfunction and specific forms of suicidal behavior, rather than suicidal behavior per se. Conclusions: A clear pattern of cognitive dysfunction that could be useful in differentiating suicidal and non-suicidal major depressive disorder patients could not be identified by using working memory and executive functions assessments.

Acknowledgements
This paper was published under the frame of European Social Found, Human Resources Development Operational Programme 2007-2013, project no. POSDRU/159/1.5/S/138776.

INTRODUCTION
Suicide is one of the most frequent causes of death worldwide () and yet, it is also considered one of the most preventable causes of death (), but for effective suicide prevention to be possible, the complex mechanisms involved in its development have to be better understood and more reliable risk assessment tools have to be developed. Based on such information, well- documented evidence-based highly effective prevention strategies could be developed (, ).
Mental and behavioral disorders have long been associated with the development of suicidal behaviors (), with major depressive disorder (MDD) being considered to convey one of the highest risk ratios in this respect (), since up to one in five patients suffering from this disorder has had at least one suicide attempt during his or her lifetime (). Therefore, the development of reliable suicide risk assessment tools for depressive patients could have a significant effect on reducing suicide rates.
Cognitive markers could represent the basis for the development of such tools, since recent research has proven some cognitive deficits to be more prominent in patients with a history of suicide attempts as compared to patients without such a history (). However, studies conducted so far on neuropsychological functioning used different paradigms () and a clear conclusion regarding the utility of working memory and executive functions modifications as markers of suicide risk has not been reached yet (2).
Therefore, the aim of our study was evaluate whether suicidal major depressive disorder patients show a specific pattern of cognitive dysfunction as compared to non-suicidal major depressive disorder patients, using a well-standardized computer-assisted assessments.

MATERIALAND METHODS
Study setting
Patients being treated for major depressive disorder in the 3rd Psychiatry Clinic of the Cluj County Emergency University Hospital between August 2014 and July 2015 were asked to participate in the study.
The Ethical Commission of the Iuliu Haţieganu University of Medicine and Pharmacy analyzed and approved the study protocol. Written, opt-in informed consent was obtained from each participant before carrying out any study procedures.

Participants
All the patients diagnosed with a major depressive episode by a board certified consultant psychiatrist, according to the criteria of the International Classification of Diseases and Related Health Problems 10th Revision (ICD-10) () were taken into consideration for participation in the study.
The main inclusion criteria used were: the patient is diagnosed with a major depressive episode, according to the above-mentioned criteria; the patient is at least 18 years old, but not over 65 years old; and the patient is legally able to give voluntary consent for participation in research studies.
Patients that fulfilled any of the following criteria were excluded: patients diagnosed according to the ICD- 10 criteria with organic, including symptomatic, mental disorders (F00-F09), mental and behavioral disorders due to psychoactive substance use (F10-F19), schizophrenia, schizotypal and delusional disorders (F20-F29), mental retardation (F70-F79); patients with a history of disorders of psychological development (F80-F89); patients diagnosed with a somatic disorder that, in the opinion of the investigator, could alter the results of the study (i.e. conductive and sensorineural hearing loss, diseases of the eye and adnexa, neurological diseases, diseases of the musculoskeletal system, etc.); patients taking any medication that could significantly alter the results of the study (i.e. high doses of benzodiazepines, antipsychotics, etc.).
The patients that fulfilled all the inclusion criteria and did not fulfill any of the exclusion criteria were invited to participate in the study. All patients were under treatment with psychotropic mediation alone when they were included. All study procedures were carried-out by trained personnel at the site.
Measures
The Romanian version of the Structured Clinical Interview for the Montgomery-Asberg Depression Rating Scale (MADRS) (, ) was used to quantify the clinical severity of the current depressive episode and item 10 of the MADRS was used to quantify suicidal risk. Participants registering a score of 4 or above on this item of the MADRS were considered to be at significant suicidal risk.
Cognitive tests were performed using the state- of-the-art computerized CogTest battery (). Working memory was assessed through the Word List Memory Test (WLMT). Executive functions were assessed using the Strategic Target Detection Test (STDT) and the AX version of the Continuous Performance Test (CPT-AX).
The WLMT is a auditory-verbal recall test in which the computer outputs a list of 20 words through an audio system. The patient is asked to repeat as many words as possible from this list. For the subsequent trials, the computer outputs the words that the patient failed to recall, but asks the patient to repeat all the words, including the ones that he recalled during the previous trial. A total number of 5 trials are conducted. Two main parameters are compiled at the end: total learning (over all trials) and total trial-to-trial transfer.
The STDT is similar to the cross-out subtest of the Wisconsin Card Sorting Test (WCST). Specifically, the patient is asked to cross-out stimuli embedded among distracters. The patient is not told in the beginning of the test which of the stimuli is the “target”, but must deduce this based on feedback from the computer. Furthermore, the target stimulus changes after a predefined number of correct responses. The number of perseverative and non- perseverative errors was recorded, as well as the mean reaction time.
The CPT-AX is a target – non-target discrimination and sustained attention test. It asks the patients to respond with a right mouse click each time an X stimulus is preceded by an A stimulus, and with a left mouse click for all other cases. The computer returns the proportions of correct target and correct non-target responses, as well as means reaction times for the two subsets.

Statistical Analysis
The Kolmogorov-Smirnov test was used to assess weather data was normally distributed. The t-test or Mann-Whitney U tests were used to assess for differences in between-group comparisons, depending on the data distribution. Descriptive results are presented as mean ± standard deviation. Statistical analysis was performed using the IBM Statistical Pack for Social Sciences (SPSS), Version 22.

RESULTS
Seventy-two patients were screened for participation in the study, 21 of these were excluded based on the above mentioned exclusion criteria and 11 of the remaining 51 patients refused to participate. The most common reason for refusal was lack of time. As a result 40 patients were finally included and assessed according to the study protocol.
Twenty percent of the patients included showed significant suicide risk. The two groups (suicidal and non- suicidal major depressive disorder patients) did not differ significantly according to gender distribution (p = 0,086 – Fisher’s Exact Test) or age (44,5 ± 13,4 vs. 51,3 ± 10,9; p >
0,05 – Mann-Whitney U Test), but as expected, suicidal patients registered significantly higher total MADRS scores than non-suicidal patients (40,6 ± 4,2 vs. 29,3 ± 7,7; p < 0,001 – Mann-Whitney U Test). The computerized assessment of executive functions showed that suicidal patients perform similarly to their non-suicidal counterparts, registering roughly the same number of errors (see Table 1). 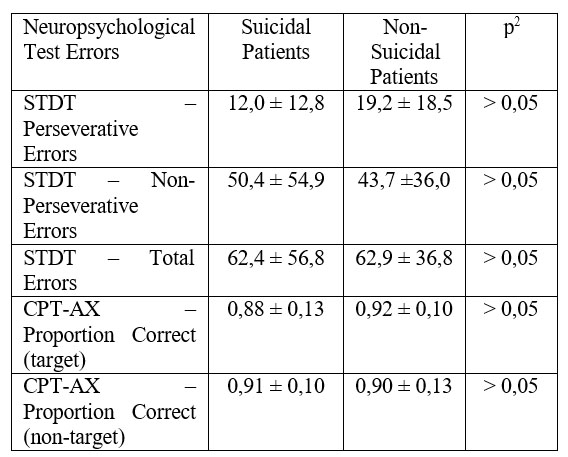 CONCLUSIONS
A clear pattern of cognitive dysfunction that could be useful in differentiating suicidal and non- suicidal major depressive disorder patients could not be identified by using working memory and executive functions assessments.