The central nervous system has a bidirectional communication with the immune system by many mechanisms that could link depression with an increase of the inflammation markers like C reactive protein (CRP), interleukin (IL)-1, IL-6 and tumor necrosis factor alpha (TNF-α) (2-6). Some studies even proved that on type 1 diabetic women but the literature data is not consistent on this subject (20-22). Therefore, the main objective of this research is to find out if the most common inflammation biological markers (like CRP, fibrinogen and others) are some statistically significant markers for the major depressive episode (MDE) and if theirs values correlates with MDE severity measured with HADS scales. In this research included 100 people from general population that came for routine blood tests on INGG ambulatory and agreed to sign the inform consent and to complete the HADS questionnaire after a psychiatric evaluation. The results of the Shapiro-Wilk and Anderson-Darling tests for all the parameters evaluated in this research, showed that the most variables do not have a Gauss distribution. Therefore, we used non-parametric tests for statistical analysis purposes (Mann-Whitney test instead of t student and “rho” Spearman quotient instead of the “r” correlation Pearson quotient). We have found a direct correlation, significantly statistic, between CPR and HADS score. Regarding CRP, the value of “rho” correlation quotient was 0.2278 corresponding for p=0.0227 (p<0.05). Regarding the validity of the biological marker which best predicts the anxiety, on the 3rd position is CRP with a Mann-Whitney value of 0.0265. For the validity of the correlation between depression symptoms and inflammatory biomarkers like CRP the Mann-Whitney value is 0.014. The main limitation of this research is the relative small sample, the fact that this population came for routine blood tests and more important the high age average of the participants.

INTRODUCTION
In the last several years, in the literature, the topic of inflammatory response as an important contributor to depression was more frequent than before. From this perspective, depression symptoms are a response to enemies (pathogens, predators or conspecifics), like a “sickness behavior” which assembles the host survival in the face of infection. On one hand, this means that anhedonia and the social withdrawal allow the individual to save energy to fight against infection and on the other hand, anxiety serves as protection from pathogen exposure because the individuals are afraid to interact and to expose themselves (1).
Moreover, the exposure to a psychosocial laboratory stressor triggers (for example to delivered a speech in 1 of 3 conditions: in front of an evaluative audience panel, in the presence of an inattentive confederate, or alone in a room) an inflammatory response which could be linked to depression by the mechanisms of stress (2). Stress activates sympathetic nervous system (SNS) and hypothalamic-pituitary-adrenal (HPA) axis which increase catecholamine (2). Further, catecholamine activates the inflammasomal (cytosolic protein complexes that form in myeloid cells) which determine the production of pro-inflammatory cytokines, like IL-6, TNF, CRP (3). In addition, the reduced heart rate variability which is a reﬂection of reduced parasympathetic tone, has been associated with increased inﬂammatory biomarkers including IL-6 and CRP in medically healthy individuals as well as patients with major depressive episode (MDE) and heart disease (4). So, globally these mechanisms, could link depression with an increase of C reactive protein (CRP), interleukin (IL)-1, IL-6 and tumor necrosis factor alpha (TNF-α), which can activate the immune system (5). These inflammatory markers can bring insight into disease severity and treatment response (6).
In addition to these mechanisms, the brain has a bidirectional communication with the immune system and studies suggested that psychosocial stressors may result in enhanced inﬂammatory responses in individuals with early life adversity no matter if these people are currently depressed or not depressed in that moment (7, 8). More specifically it has been proven for the male major depression patients with increased early life stress exhibit enhanced inflammatory responsiveness to psychosocial stress, providing preliminary indication of a link between major depression, early life stress and adverse health outcomes in diseases associated with inflammation (7). To further elucidate the relationship between childhood maltreatment and pro-inflammatory cytokine production, we examined plasma IL-6 response to the Trier Social Stress Test (TSST) in 69 healthy adult subjects without depression or post-traumatic stress disorder (8). The childhood trauma questionnaire (CTQ) total scores were positively correlated with overall change in IL-6 response, as well as the maximum IL-6 concentration during the TSST (8). Inflammation may be an important developmental mediator linking adverse experiences in early life to poor adult physical and mental health (8). The results of this preliminary study warrant further investigation in a larger sample (8). The inflammatory process has been proven to be crucial both for CNS and cardiovascular disease (2, 9). One of the most frequent inflammatory biomarker for the prediction of cardiovascular death or morbidity is the high sensitivity C protein (hs-CRP) (9).
CRP is an acute-phase reactant synthesized by the liver in response to cytokines released by damaged tissue. P r o d u c t i o n i s c o n t r o l l e d b y i n t e r l u e k i n – 6 , a n inflammatory cytokine. CRP is commonly measured to screen for inflammation or infection and CRP is produced by cells in the vascular wall such as endothelial cells, smooth muscle cells, but also by adipose tissue (10).
Chronic inflammation is pivotal in heart disease; studies have shown that high levels of CRP can be a marker of atherosclerosis. In patients with acute coronary disease, CRP level predicts mortality and cardiac complications (10). The main objective of the current study was to find out if the most common inflammatory markers (CRP) could be used as biomarkers for depression and anxiety by analyzing their correlation with Hospital Anxiety and Depression Scale (HADS) in a population of people that came for the routine laboratory analysis in National Institute of Geriatric and Gerontology (INGG) ambulatory services.

METHODOLOGY
The study consisted of 100 screen healthy and diagnosed people that came for the routine laboratory analysis in, Ambulatory Service of the National Institute of Gerontology in Bucharest. After that they understood and agreed the procedure and the study protocol was explained and signed the inform consent they had a brief psychiatric interview, completed the HADS questionnaire and a blood sample was taken.
We investigated our patients by two ways:
1) Measuring C-reactive protein (CRP) values because it is a sensitive marker of chronic inflammation caused by infectious and other inflammatory agents. It becomes relevant when CRP levels exceed 10 mg/L. For studying low grade inflammation (usually generated by endothelial inflammation), we measured also the high – sensitivity CRP (hs-CPR) but these results will be the subject of another article (12). Elevated CRP levels have been associated with depression but the results regarding the use of CRP as a biomarker for MDD are not consistent (13). We also measured all the others markers for inflammation like fibrinogen, erythrocyte sedimentation rate and plasma viscosity.
2) Measuring the severity of depression and anxiety with Hospital Anxiety and Depression Scale (HADS) which was originally developed by Zigmond and Snaith as a tool for the detection of anxiety and depression in people with physical health problems (14). Each item of the scale is scored from 0-3 and this means that a person can score between 0 and 21 for either anxiety or depression. After that the scale was assessed by others researchers which have explored HADS data to establish the cut-off points for anxiety or depression (15). The studies identified a cut- off point of 8/21 for anxiety or depression (15). For anxiety (HADS-A) this gave a specificity of 0.78 and a sensitivity of 0.9 (15). For depression (HADS-D) this gave a specificity of 0.79 and a sensitivity of 0.83(15). We also have the approval to use this scale in scientific interest from Inomedica nongovernmental organization.
Ethical approval was obtained and written informed consent obtained from all participants. The statistical analysis was executed on SPSS 11.

RESULTS
Gender ratio was favorable to women in the study lot (64% females), with a median age of 64 years, residing mostly in urban area (92%), 80% being retired.
Analyzing CRP levels revealed the following results: only 4% had increased CRP levels (Table 1).

The CRP mean distribution in the investigated participants was 7 mg/dl with a minimum value of 5 mg/dl and a maximum value of 30mg/dl. This is graphically represented in in 1st figure. In the first quartile, the value was 6,9 mg/dl and in the 3rd quartile the value was 7.1 mg/dl. 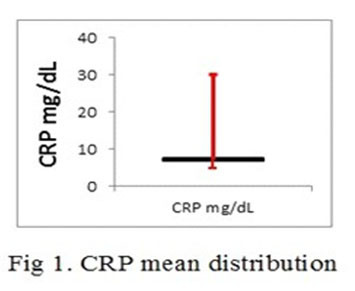 The HADS-D and HADS-A scores revealed that 33% presented depression symptoms and 58% of the patients presented anxiety symptoms (Table 2).

The results of the Shapiro-Wilk and Anderson-Darling tests for all the parameters evaluated in this research, showed that the most variables do not have a Gauss distribution. Therefore, we used non-parametric tests for statistical analysis purposes (Mann-Whitney test instead of t student and “rho” Spearman quotient instead of the “r” correlation Pearson quotient). We have found a direct correlation, significantly statistic, between CPR and HADS-D score. Regarding CRP, the value of “rho” correlation quotient was 0.2278 corresponding for significant statistically p value (p<0.05) of 0.0227 (Fig 2). We found a direct correlation, significantly statistic, between CRP and HDAS-A score. For CRP, the “rho” correlation quotient was 0.447 and this corresponds to a value of p<0.001 (Fig. 2 and 3). 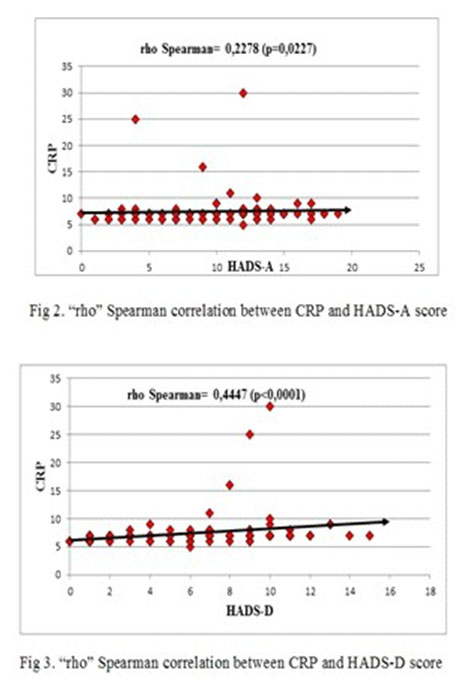 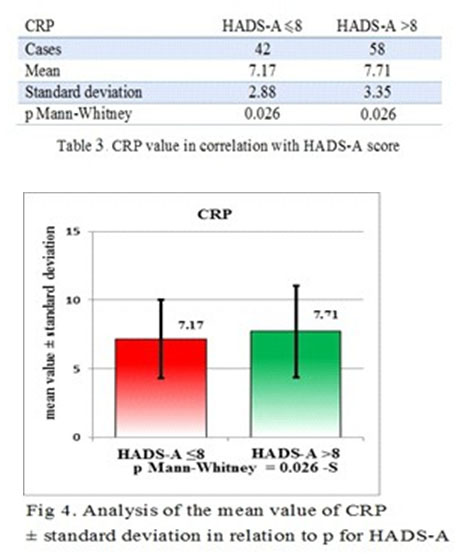 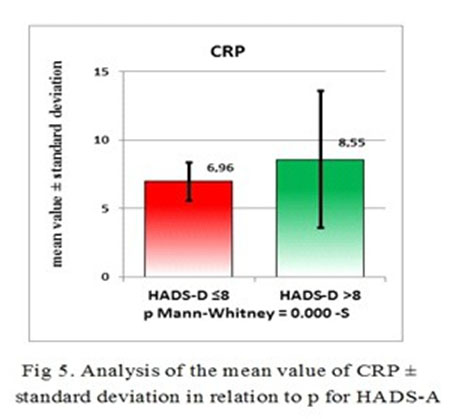 DISCUSSIONS
This research analyzed the relationship between possible inflammatory biological markers and MDE (anxiety and depression symptoms scores). The results of the present study revealed a significant association between CPR and HADS-D score and HADS-A score.
There were some studies outlining the increased

levels of inflammatory markers, such as C-reactive protein (CRP), in people with symptoms of depression, although this is not a universal observation (16).
A research regarding 73131 adults in Denmark showed that subjects having increased CRP levels were more than twice as likely to have depression compared with subjects with normal CRP levels in the general population (17). More specifically, a study that used a MDD population in a comparison with a healthy age- matched control group in young adults examined the relationship between CRP and depression. The results indicated significantly higher CRP levels in a depressed college aged population compared to a healthy control group (18).
Hence many studies associated CRP levels with MDD in middle-aged and older adults. A recent study – that included 56 patients with MDD and 106 healthy age- matched controls – examined the relationship between Major Depressive Disorder (MDD) and inflammation using serum C-reactive protein (CRP) in young adults (19).
In our study, CRP was a reliable marker for the anxiety and depression intensity of symptoms evaluation. CRP was proven to be more accurate for anxiety symptoms intensity than for MDD symptomatology and there was a statistical difference between the patients with and without anxiety (p=0.011).
Despite the extensive literature about the depression – CRP linkage, only a few studies have looked at the association between CRP and anxiety. Liukonnen T et al (2011) demonstrated that anxiety, as well as comorbid anxiety and depression can be associated with an increased risk for low-grade inflammation in males at general population level (21). Elevated levels of CRP were found in both men and women with the onset of anxiety disorder later in life (22).
The main limitation of this research is the relative small sample of participants from general population, the fact that this population came for routine blood tests and more important the high age average of the participants. The relative small sample of participants did not allow us to make a separate and accurate statistical analysis on CRP between the groups with MDE and cardiovascular disease
/ MDE and no cardiovascular disease and no MDE and no- cardiovascular disease. Further studies are required to elucidate the biological mechanisms underlying these associations and their implications, but also to confirm this cheap and easy to make inflammatory parameter as a screening tools for depression or CNS inflammation.