The maladaptive traits of personality, which are expressed by behavior, have always constituted a major problem in psychiatry because of the fact that they represent a personal and collective source of suffering. Impulsiveness, anxiety, emotional lability, eccentricity are only a part of the pathological traits which are externalized through behaviors that are considered psychiatric emergencies such as hetero-aggressiveness and self-aggressiveness. Apart from the psychotherapeutical treatment, which is considered the election treatment in these disorders, the psychopharmacological treatment is still under debate. Its indication refers to the biological component of the personality dominated by temperamental traits. Cloninger describes the temperament as “the emotional core” of personality and demonstrates that this component of personality has a biological base, suggesting thereby the psychotherapeutical interventions in personality disorders. This study describes the psychopharmacologic effect and role on the pathological personality traits and reunites most attributes of a meta-analysis. At the same time it is adapted to the alternative personologic model of DSM 5.

The personality disorder (PD) is defined in DSM 5 (Diagnostic and Statistical Manual of Mental Disorders) as an enduring pattern of inner experience and behavior that deviates markedly from the expectations of the individual’s culture. It is pervasive and inflexible, its onset can be traced back to adolescence or early adulthood, is stable and of long duration and leads to distress or impairment (1).

As a result personality disorders are accompanied permanently by an adaptive deficiency of variable intensity and represent a constant source of suffering for the individual and for those next to him. In order to understand the pharmacodynamic and pharmacokinetic particularities of pharmacological medications in PD, we must begin with the biological component of the personality’s structure. Robert Cloninger proposes a system centered on three levels: temperament, character and the psyche (2). The three levels are defined based on three types of memory (Table 1.)
Temperament (“the emotional core” of personality) implies procedural memory, adjusted through the circuits of the cortico-striato-limbic system. Character (conceptual core of personality) is related to semantic memory, that implies more complex cognitive functions of abstracting and symbolization (3, 4, 5). Psychism – is related to episodic memory and implies the sole human process of symbolic invention, process that leads to the invention of art, science and spirituality (3, 4, 5).

Table 1. The relationship between memory and personality: temperament is related to procedural memory, character to semantic memory, and the psyche to episodic memory
As mentioned above temperament, the biological component of personality, is related to the neurotransmitters’ functioning and implicitly easily influenced by the psychopharmacologic products.
Novelty seeking is a domain of temperament regulated by dopamine and is responsible for behavioral activation. H a r m a v o i d a n c e i s r e l a t e d t o s e r o t o n e r g i c neurotransmission. Studies on animals show that ascending serotonergic projections from the dorsal raphe nucleus inhibit dopaminergic nigrostriatal neurons, assuring this way the behavioral inhibition that is characteristic to this domain (6). Reward dependence depends on the noradrenergic connections of the cerulean nucleus with the thalamus and the temporal lobe, being responsible for the social behavior of the person (6). Persistence is a temperamental domain that depends on the hippocampal-striatal glutamatergic projections and which assure the transformation of behavioral inhibition caused by punishment into behavioral activation by anticipation of reward.
The symptoms related to temper are in a close relation with harm avoidance, impulses control and aggressiveness with novelty seeking, emotional and social detachment with reward dependence, and psychotic symptoms and cognitive distortions are related to persistence (7).
Any therapeutic approach of PD must start from the assessment of risk and benefit relation. Thus, we shall not resort to psychopharmacologic treatment in case of mild personality disorders, without maladaptive traits that would lead to self-aggressive and hetero-aggressive behaviors or when the patient’s functioning in roles is satisfying.
Patients’ compliance is another factor that influences directly the therapeutic success. Unfortunately, patients with moderate and severe personality disorders, who do not have psychotic symptoms or of aggressiveness outside the family, do not arrive at the psychiatric service because of the ego-syntonicity and the poor value of cooperativeness and reward dependence. If they get to benefit of psychopharmacologic treatment, chances that these patients respect the recommendations are very scarce.
The most studied personality disorder is the borderline personality disorder (BPD), followed by the schizotypal personality disorder (SPD) and by the rest of Cluster B personality disorders. Personality disorders that are characterized by novelty seeking and the ones with high reward dependence, these are the patients who end up benefiting of the psychopharmacologic treatment. Borderline personality disorder is the most severe personality disorder because the Self reaches an emphatic adverse patterning, and the diffused Self image causes extreme suffering to the individual.
T h e m e d i c a t i o n s u s e d i n t h e psychopharmacologic treatment of PD are antipsychotics, antidepressants, antiepileptics and anxiolytics.
Typical antipsychotics, in small doses, have effect on the psychotic symptoms and on the cognitive non-psychotic ones. It has been demonstrated that these medications may be beneficial also concerning the affective and behavioral symptoms (Table 2.).
These studies have proven also another aspect of the psychopharmacologic treatment of PD: lack of compliance to treatment. In case of typical antipsychotics the explanation being the side effects of these medications: aggravation of affective and cognitive negative symptoms by inhibition of the mesolimbic and mesocortical systems, the appearance of extrapyramidal symptoms, hyperprolactinemia, sedation, blurry vision, mouth dryness, orthostatic hypotension, akathisia, tardive dyskinesia.

Along with the appearance of atypical a n t i p s y c h o t i c s a n e w c h a p t e r o p e n e d i n psychopharmacology and hence in PD treatment (Table 3). These medications, apart from their antidopaminergic effect, they also have an antiserotonergic effect (except for atypical antipsychotics – partial agonists of dopamine) that reduces the pro- extrapyramidal and hyperprolactinemic effect of nigrostriatal respectively, tuberoinfundibular hypodopamine.
In case of atypical antipsychotics the most important side effects are the cardiometabolic ones and gaining weight, especially in case of clozapine and olanzapine.
The antidepressants play an important role in the treatment of affective symptoms, impulsivity and affective lability of PD (Table 4.). It has been proved an e l e v a t e d e f f i c i e n c y o f m o n o a m i n e o x i d a s e inhibitors (MAOI) and selective serotonine reutake inhibitors(SSRI), the latter having less side effects as to MAOI.
Affective lability and impulsivity from PD have led to the introduction of antiepileptics medications in their medicamentary treatment (Table 5.). Thus, impulsivity, aggressiveness and affective lability of antisocial and borderline PD may respond to antimanic treatment. Lamotrigine seems to have a mood stabilizer effect more efficient in type I bipolar disorder besides the manic and depressive episodes (31) and possibly also in the case of affective lability encountered in borderline personality disorder. In the case of the mood in PD, lithium salts have a predominantly antimanic effect, and lamotrigine has a predominantly antidepressive effect (7).

Benzodiazepines through their anxiolytic effect would have a beneficial effect in personality disorders of Cluster B and C, but they must be prescribed with caution because of the addiction they cause. Clonazepam for its anxiolytic and anticonvulsivant effect is preferable (46).
In 2001 APA has published a guide for BPD treatment (47). The first line treatment is the psychotherapeutic one, and the psychopharmacologic one as an adjunct treatment. I n t h i s g u i d e t h e r e c o m m e n d a t i o n s f o r t h e psychopharmacologic treatment of BPD are elaborated based on three algorithms that combat affective symptoms, a series of impulsive symptoms and cognitive- perceptual ones. Thus, for affective symptoms it is recommended SSRI alone or in combination with a neuroleptic and clonazepam which, if has no effect, it is changed with MAOI or mood stabilizers or with a combination of these. For impulsive symptoms, it is started with SSRI to which are added neuroleptics and mood stabilizers or MAOI, after which it is passed to an atypical antipsychotic, if the initial treatment did not function. The algorithm for cognitive-perceptual symptoms treatment starts with typical or atypical antipsychotics to which is added SSRI in case of coexisting affective symptoms, combination which is replaced by clozapine in case of its inefficiency. 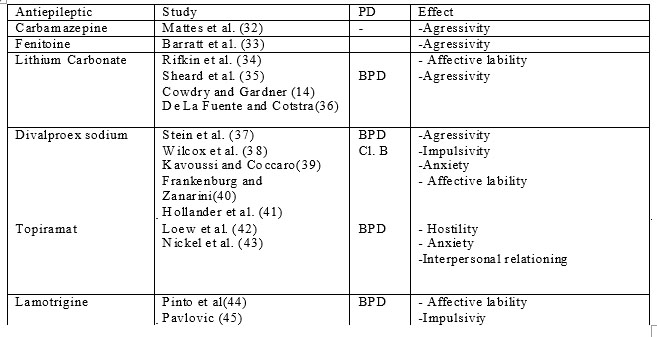 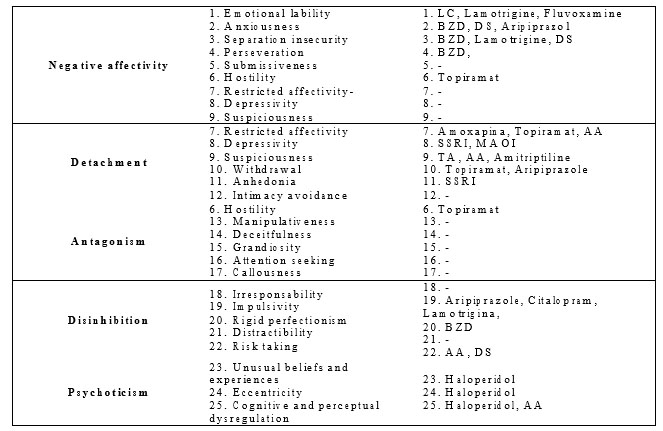 In the psychopharmacology treatment of personality disorders, DSM-5 categorical system does not offer us too much help because it offers concrete information about pathological traits of the patient. The DSM-5 alternative system, that derives from the big five model, by its dimensional character is a good basis for future studies and to elaborate certain therapeutic strategies in PD.
This model contains five domains, each with 3-9 facets (1). Some facets belong to several domains (Hostility is a facet of the Negative Affectivity domain and of Antagonism domain), so there is an overlapping. The Flat Affectivity Facet – of the Negative Affectivity domain is in fact the opposite pole of this trait (in table indicated by a minus) to avoid overcharging the model with too many traits (Table 6.).
There are not any recent studies yet dedicated to the correspondents among the five described domains and the psychopharmacologic medications.
We propose a variant of medication associations that applies to domains on the whole and when possible to several of their composing facets. Clinical practice will confirm or infirm us the usefulness of the proposed strategy. This would be also a well certified support for psychotherapeutic interventions also.
Any of the responsive variants to haloperidol opens the path of using atypical antipsychotics that have effect on dopamine.
Traits which are allocated to self-esteem and individual Super ego seem to be difficult to integrate in this psychopharmacologic strategy.